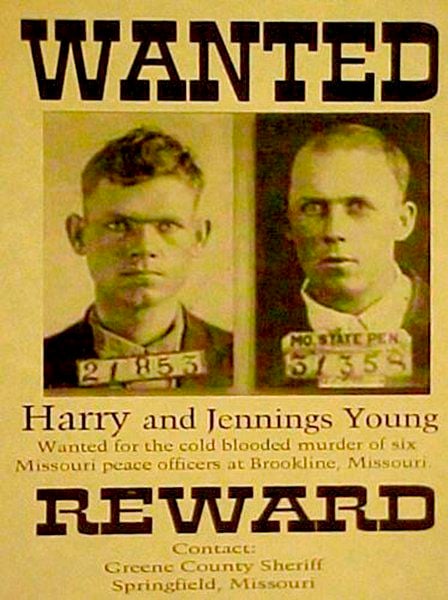 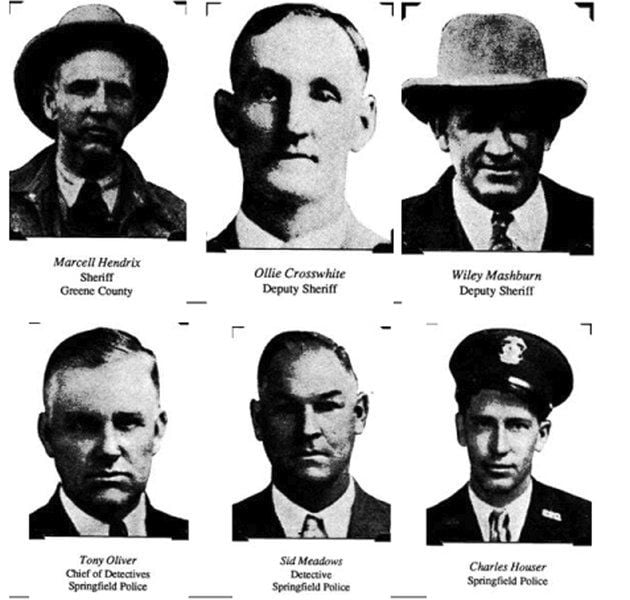 Eleven men went out to the Young family farm to arrest Harry and Jennings Young for auto theft. Woefully unprepared for the confrontation, the shootout resulted in the deaths of six law enforcement officers. It was the deadliest law enforcement gunfight in the 20th Century.Credit | murderpedia.org 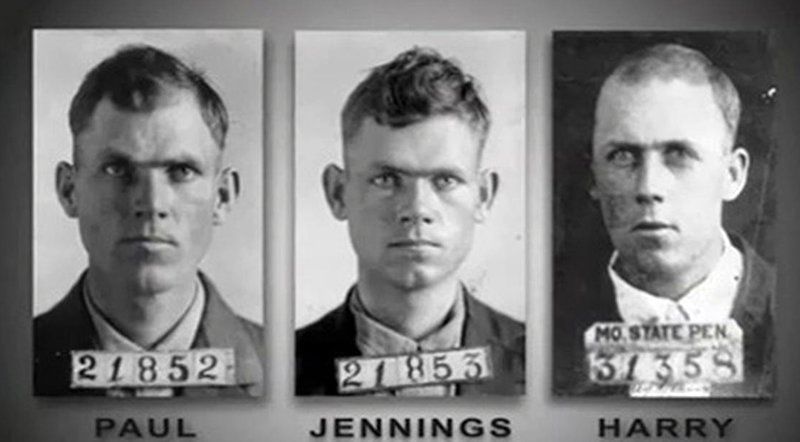 The Young brothers, — Paul, Jennings and Harry — ran a large-scale auto theft operation for at least two years from 1929 to 1931. They were reputed to have connections as far as the West Coast.Credit | murderpedia.org 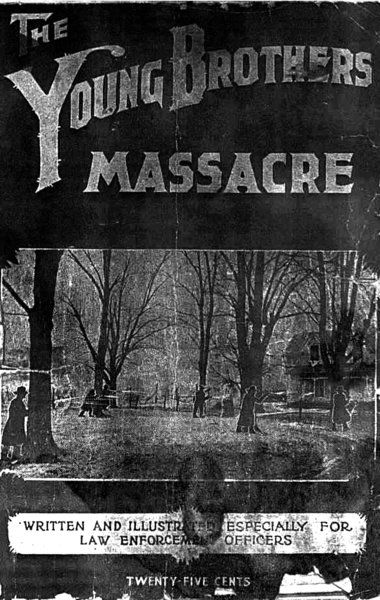 This booklet "The Young Brothers Massacre" was published in 1932 to be distributed among law enforcement officers in hope of preventing another such massacre. It was described as "the deadliest single law enforcement gunfight in the 20th Century." A version is available online.Credit | Public domain

Eleven men went out to the Young family farm to arrest Harry and Jennings Young for auto theft. Woefully unprepared for the confrontation, the shootout resulted in the deaths of six law enforcement officers. It was the deadliest law enforcement gunfight in the 20th Century.Credit | murderpedia.org

The Young brothers, — Paul, Jennings and Harry — ran a large-scale auto theft operation for at least two years from 1929 to 1931. They were reputed to have connections as far as the West Coast.Credit | murderpedia.org

This booklet "The Young Brothers Massacre" was published in 1932 to be distributed among law enforcement officers in hope of preventing another such massacre. It was described as "the deadliest single law enforcement gunfight in the 20th Century." A version is available online.Credit | Public domain

Recently, a friend asked if I had written anything on the Brookline Massacre.

I'd never heard of it. What was it?

Only the deadliest gunfight for law enforcement officers in the 20th century, he replied.

The Young brothers — Paul, Jennings and Harry — were the youngest boys in a family of 11 siblings born to James and Willie Florence Young. The family had lived in Christian County until drought led James Young to move to a homestead near Frederick, Oklahoma, in 1902. They lived there for 15 years before moving back to Christian County and then to a farm in Brookline, about 5 miles south of Springfield, in 1918.

Jennings and Paul had reputations as excellent marksmen. Jennings was even banned from local turkey shoots because he always won. Their first burglaries took place in Oklahoma. Even though they had no visible means of making money, they sported a 1918 Ford. In Missouri, they burglarized hardware stores in Ozark and Nixa in 1918. They were arrested when stolen items were found stashed on the family farm and in Frederick. Jennings and Paul were convicted and sentenced to the penitentiary in 1919 but were released on good behavior short of their full sentence.

James Young died in 1921. Their mother became their advocate in succeeding years. She even put the farm up for bond in 1924 when Jennings and Harry were charged with railroad theft. Jennings alone was convicted, serving three years in prison at Leavenworth, Kansas. Paul was arrested for burglary in Texas, which landed him in the penitentiary.

By the late 1920s, Jennings and Harry had formed an auto theft ring. They would steal a car in Missouri, sell it in Texas, Oklahoma, Kansas, Iowa or Illinois, then steal another on the way back to sell in Missouri. Their connections stretched even to the West Coast. While the family didn't approve, they didn't repudiate them. That drew them into the brothers' schemes, selling hot cars or keeping them under wraps for later sale. The family's large barn stored stolen cars.

On June 2,1929, Harry Young, known for his hot temper, was stopped by the Republic city marshal for drunken driving. Rather than being taken in, he killed Marshal Mark Noe. That began an unsuccessful two-year manhunt while he lived under an assumed name in Texas, even as he continued to steal cars.

On Dec. 31,1931, sisters Lorena and Vinita drove into Springfield to sell a car to a dealer. There was a title issue, and the women said they'd return with more information. The buyer recognized them and immediately called Springfield police Chief Ed Waddle. When the women did not return the next day, the police worried they had been spooked. However, as Brookline was out of the city, it was under the jurisdiction of the Greene County sheriff. At noon on Jan. 2, 1932, the women appeared at the dealer's lot and were quickly arrested while their mother just happened to be in Springfield.

Officers were sure the brothers were at the farm. Sheriff Marcell Hendrix gathered deputies, Springfield police detectives and a civilian — in all, 11 men to confront the Youngs. Detective Lee Jones warned, "We ought to handcuff the girls together and send them in to tell the boys to come out with their hands up," but Tony Oliver shouted back, "Hell, that would be sissy, and anyway the boys may not be there."

Armed with only handguns, the ammunition in them and a teargas gun with two canisters, the men left.

Officers surrounded the farmhouse. After calls for the men to come out were met with silence, a tear gas canister was tossed inside. Two officers kicked in the back door to be met with shotgun blasts that killed them both. In the front of the house, a gun battle raged. Two officers were sent back to town for reinforcements as bullets followed their car down the lane. The brothers picked off three more men as the officers ran out of ammunition. As he lay dying, Oliver ordered the three remaining officers, "Run like hell, boys. Don't stay here."

The men ran toward the road. Out of ammunition, deputy Ollie Crosswhite had been pinned down behind a root cellar in back of the house. As one brother kept him pinned, the other circled around the cellar and killed him. Six deaths in just a few minutes.

By the time reinforcements arrived, the brothers had hiked cross country into Springfield, where they stole a car around 9 p.m. and headed southwest. They made it to Streetman, Texas, almost 500 miles, when their car overturned on a wet road about 1 p.m. Sunday. They hitched a ride into Houston, where they rented a room from J.F. Tomilinson.

When Tomilinson read a Houston Post-Dispatch story with the men's mugs on Tuesday morning, he tipped police. This time, well-armed officers entered the house and fired shots into the bathroom, where the brothers had holed up. In the silence, a voice called out, "We're dead. Come and get us." Jennings lay dead, and Harry was dying.

What to do with the bodies became its own story. Springfield officials asked Joplin and Carthage police to stop any hearse on Route 66 because of concerns vigilantes would desecrate the bodies. The undertaker was followed into Oklahoma but lost his pursuers. The Globe and News Herald reported his whereabouts were unknown. A dual grave was dug in the family plot near Brookline but was never used.

Instead, the bodies were spirited away to Pittsburg, Kansas, then quietly transported to Joplin for a private service in Fairview Cemetery on Jan. 13. Willie Florence, her two daughters, detective Owen Brown, other Springfield officers and reporters from the Globe and News Herald were the only ones present. Undertaker W.L. Starne's service was brief: "The Lord giveth and the Lord taketh away."

The kidnapping of the Lindbergh baby on March 1 helped push the massacre off the front page. But Jan. 2, 1932, lives in infamy as the deadliest gun battle for U.S. law enforcement officers in the 20th century.