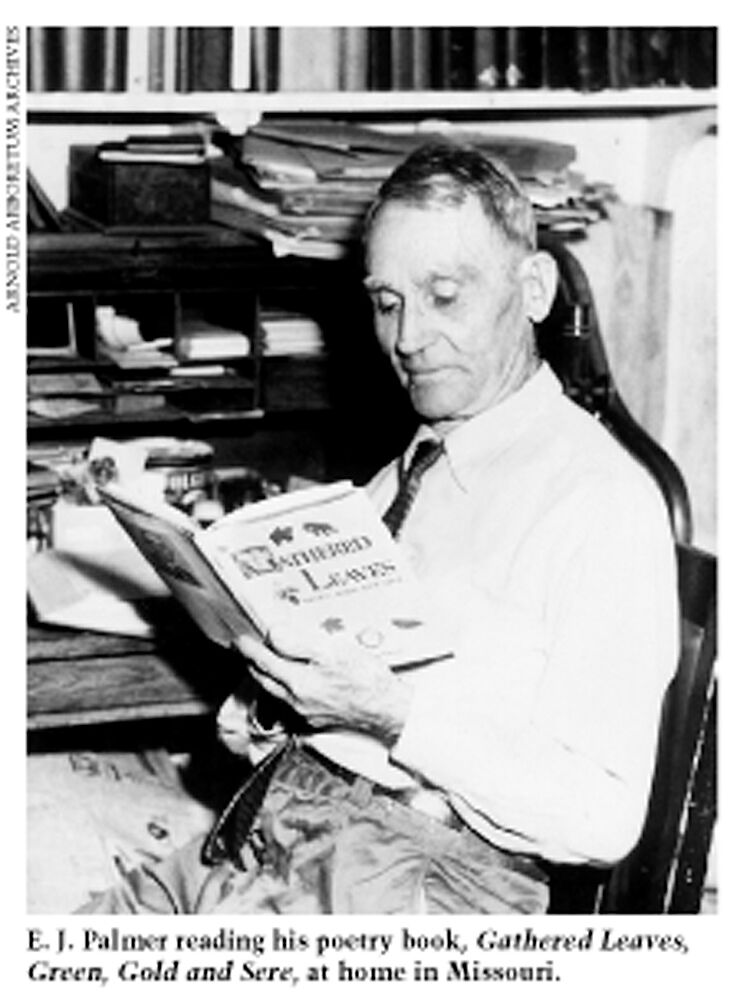 Ernest J. Palmer posed for a photo in his home office as he read his book of poetry, "Gathered Leaves, Green, Gold and Sere." Palmer, a botanist and plant collector, retired from the Arnold Arboretum in Harvard University in 1948 and returned to his hometown of Webb City. His wife, Elizabeth, collected 76 of his poems for the volume published in 1958.

Botanist Charles Sprague Sargent visited Ernest Palmer in Webb City to collect specimens for a week in 1901. They found this specimen of Crataegus aspera (hawthorn) on Oct. 2, 1901 along a stream in Jasper County. The varieties of hawthorn were favorites of Sargent. 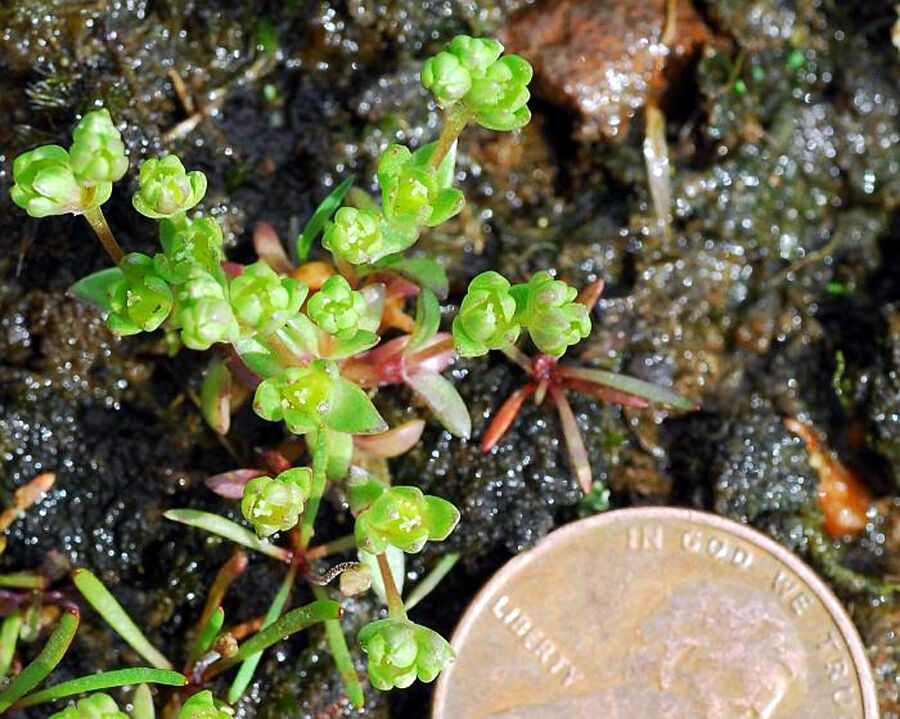 This plant gives new meaning to the terms "tiny" and "inconspicuous." Many of its parts measure in the millimeters, testing the boundaries of traditional macro photography. The plant's unusual habitat requirements contribute to its rarity. In Missouri, it has been reported from a cluster of 8 counties in the southwestern region of the state. Elsewhere it is only known from a few scattered populations in Arkansas, Louisiana, and Texas. It is listed as imperiled in both state and federal conservation rankings. Ernest Palmer located the plant on chert glade in Jasper County. 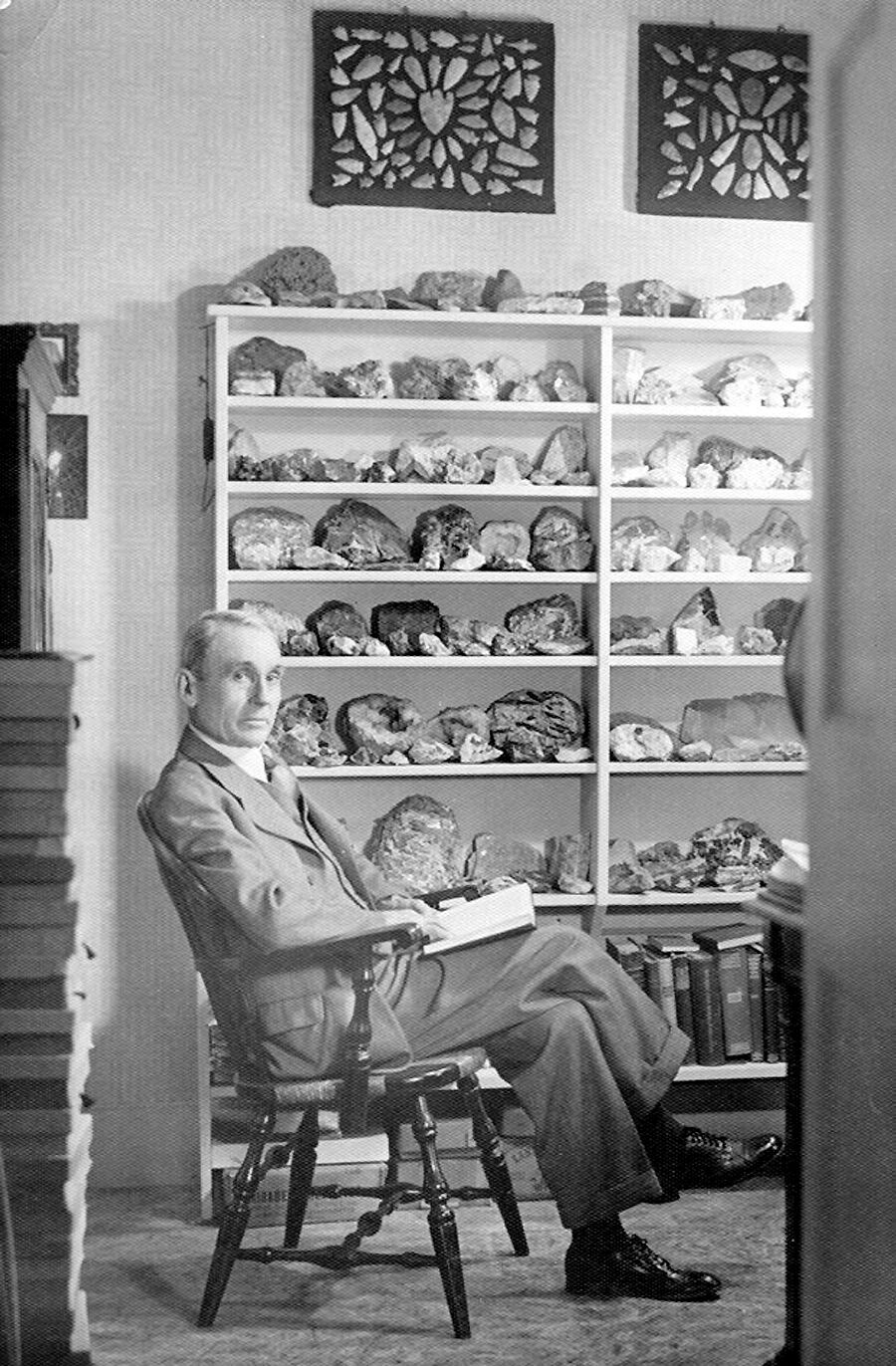 Ernest J. Palmer’s office in the Arnold Arboretum in Harvard University was decorated with many rock specimens and arrowheads he collected while on plant collection trips. He retired from the arboretum in 1948 and moved back to his hometown of Webb City.Courtesy | findagrave.com

Jasper County has long celebrated naturalist Marlin Perkins, of Carthage, but Webb City’s native son, Ernest J. Palmer, was another naturalist renowned for his work in botany, geology and archaeology. Despite not having a college degree, through diligent hard work he carved out a career as a plant collector for Harvard University’s Arnold Arboretum.

Ernest J. Palmer was born in Leicester, England, in 1875. His parents, Amos and Annie Palmer, immigrated to the U.S. in 1878. They first settled in Johnson County near Warrensburg but moved to Webb City when Ernest was 16 in 1891. His father, hearing of the mining boom, hoped to make his fortune hauling goods with his team of horses. The father and son built their home at 321 S. Main St., where the son lived until his death in 1962.

The senior Palmer had severe health issues. From age 11, his son hauled freight. This meant the son’s formal schooling was intermittent even though the family valued learning. Ernest attended Webb City High School and the Webb City Baptist College.

Palmer had great curiosity and was fascinated by the fossils found in the tailing piles, woodlands and stream valleys. Though he worked six days a week, he still found time to explore the county collecting marine fossils, arrowheads and various plant species. His parents encouraged this passion. In the 1890s, he began placing short ads in national magazines offering fossils and artifacts for sale to amateur collectors. He built a business with a regular clientele. Most of his focus was on fossils.

However, it was after reading botanist and collector Benjamin Franklin Bush’s 1894 article on Missouri plants that he responded to Bush’s request for readers to send him woody plants they wished to identify. Palmer read the article in 1900 and sent Bush specimens. It led to an ongoing correspondence regarding specimens and observations about collecting plants for classification. Palmer made meticulous notes with excellently preserved samples of leaves, twigs, flowers and fruit.

Bush’s respect for Palmer’s work led him to plan a visit to the family home at 321 S. Main in Webb City for a week of collecting specimens in 1901. The trip was productive, leading Bush often to make stops in Webb City on collecting tours. Palmer worked as Bush’s assistant on those visits, gaining valuable experience.

Palmer’s work with Bush brought him to the attention of Charles Sprague Sargent, director of the Arnold Arboretum in Harvard University and then to William Trelease, director of the Missouri Botanical Garden (Shaw’s Garden). Soon, he was submitting specimens to both men. Sargent had a special interest in the hawthorn. Palmer found numerous varieties in Jasper County for him.

When the Dutch botanist Hugo de Vries, famed for rediscovering Mendel’s laws of genetics, visited the U.S. in 1904, he asked Sargent and Trelease for suggestions on the best places to go to learn about North American plants. Both men recommended Palmer. So the Dutchman visited Webb City, staying as a houseguest of the Palmer family. In 1907, Sargent, a wealthy man in his own right, made the pilgrimage to Palmer’s Webb City home to tour the area.

All this time, Palmer was still working various jobs to support the family. He had worked up to a post as a bookkeeper for a local oil company. He still corresponded with those who asked him for answers to local botanical questions. His disciplined work ethic kept him busy with a variety of pursuits. The excellent railroad and interurban connections gave him ready access to the Tri-State District, packing his bicycle along for local excursions.

Sargent, who was considerably impressed by the collecting skills of the young man for his favorite hawthorn species, had offered him a position as a collector in 1907. Palmer turned him down, citing his need to support his parents and sister. Palmer’s salary at the time was $50 a month.

Over the next several years, Sargent continued to press Palmer to work for the arboretum and kept getting no for an answer. Meanwhile, Palmer was invited to submit a paper on his research in 1910. His first paper was titled “Flora of the Grand Falls Chert Barrens.” (Chert glades is the modern term.) He subsequently found what at the time was a unique species, Geocarpon minimum in a glade near Alba. The tiny succulent is comparable in size to a penny.

In 1911, Amos Palmer died, and Sargent’s offers became more insistent. By 1913, Palmer gave in and took a position collecting specimens for both the Missouri Botanical Garden and the Arnold Arboretum. He traveled the country collecting samples for both institutions for the next seven years.

His mother died in 1920, and that gave him the freedom to move to Boston in 1921. The change was profound. The price of a trolley ticket in Boston seemed high to him at ten cents, so he walked everywhere, exploring the city.

The work hours at the arboretum were long. He worked six and a half days a week. The Arboretum sent him on plant collecting expeditions every year. Most often, he worked solo on those and only occasionally had a helper. Besides collecting plant specimens, he continued to collect fossils and Native American artifacts.

His patron Sargent died in 1927. The new director initially fired him as a cost-cutting measure, but with a change of administration, he was rehired to his old job in 1928. He continued to write scientific papers on plants, eventually publishing 212 papers on plants collected for the Missouri Botanical Garden and Arnold Arboretum.

In 1930, his life changed once more when at age 55 he married Elizabeth McDougal, a bacteriologist who worked for the Massachusetts State Laboratory located adjacent to the arboretum. The couple had three children.

Palmer worked for the arboretum until he retired in 1948. The family moved back to his home in Webb City. He may have been officially retired, but he continued his work collecting and evaluating specimens, carrying on an extensive correspondence and taking part in local events. His own personal collections of plants, fossils and artifacts became a private museum at his home.

He was a member of the George Washington Carver Birthplace Committee, wrote a botanical pamphlet for the monument and made a herbarium of all the Missouri plants growing on the monument grounds. Vigorous in his retirement, on his 83rd birthday, he hiked from Webb City to the Carver Monument, a 22-mile walk. He gave talks to local groups about botany, fossils and local natural history. His wife collected 76 of the poems he had written over the years and published them in 1958. “Gathered Leaves: Green, Gold and Sere” conveyed “his ideals and philosophy of life.”

Never idle, even as he health began to fail in 1962, he was preparing a professional article on the Ozarks for the Journal of Forestry, University of Missouri. He finished it three weeks before his death at home on Feb. 25, 1962.

He willed his herbarium of more than 20,000 specimens as well as his geological and archaeological collections to the University of Missouri. Tributes poured in from professional colleagues. His scholarship and willingness to share his time and expertise gained him widespread respect.

In a portrait of Palmer, Clarence Kobuski mentioned a letter from Palmer describing his life in 1955. He felt very fit: “It is hard for me to believe it as I still feel as strong in body and mind — as far as I can tell — as I did at fifty. I can easily walk ten miles any day; and I think I could climb a good sized tree, if there was anything at the top of it that I wanted badly enough.”

Concluded Kobuski, “For a man retired and eighty years old, he was certainly was enjoying life to the fullest, doing exactly what he wanted to do — and he seemed so well equipped to do it!”