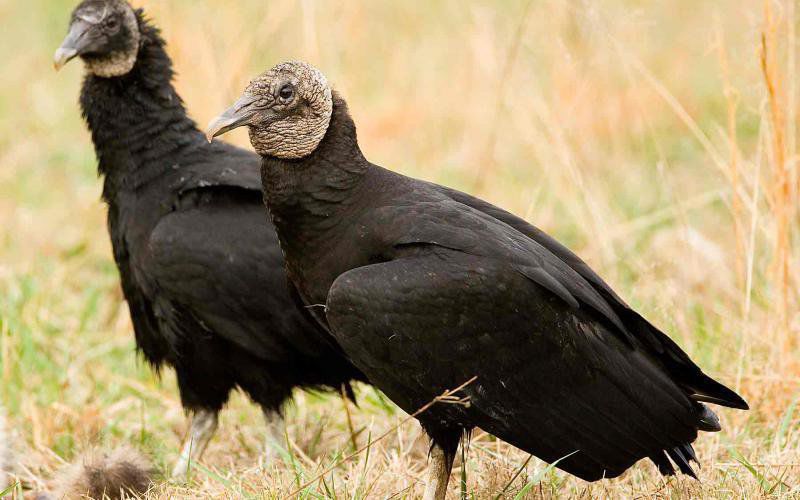 Black vultures have become a menace, according to some farmers, damaging properties and killing cattle. The large vultures have been permanent residents in the southern U.S. for a long time, and were documented by John James Audubon in the 19th century, but their move into Missouri is relatively recent.COURTESY | MISSOURI DEPARTMENT OF CONSERVATION 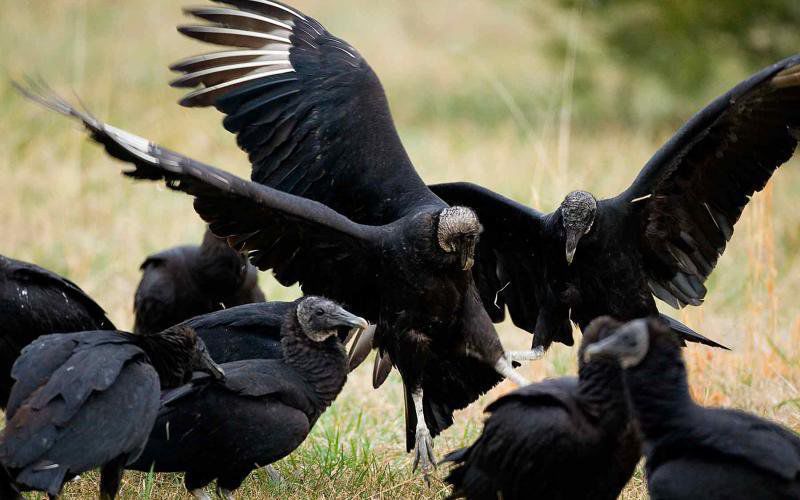 Black vultures are moving into Missouri and that has caused concern for cattlemen. The birds are the most common vulture in the Western Hemisphere, and their range extends from South America and now as far north as the Lake of the Ozarks, according to the Missouri Department of Conservation.COURTESY | MISSOURI DEPARTMENT OF CONSERVATION

Black vultures have become a menace, according to some farmers, damaging properties and killing cattle. The large vultures have been permanent residents in the southern U.S. for a long time, and were documented by John James Audubon in the 19th century, but their move into Missouri is relatively recent.COURTESY | MISSOURI DEPARTMENT OF CONSERVATION

Black vultures are moving into Missouri and that has caused concern for cattlemen. The birds are the most common vulture in the Western Hemisphere, and their range extends from South America and now as far north as the Lake of the Ozarks, according to the Missouri Department of Conservation.COURTESY | MISSOURI DEPARTMENT OF CONSERVATION

The first time a vulture killed one of Charlie Besher’s cows was in August 2018, on his ranch about 50 miles west of Cape Girardeau in southern Missouri.

By the time Besher got there, one of the young calves was down on the ground, already dead, its eyes pecked out. The birds had then started on the cow. Besher chased off the birds, but the cow’s internal injuries became infected and she died.

“It just seemed like it was a downfall from there,” he said.

The next target was a 250-pound calf. When Besher arrived, there were about 30 birds on it, and they’d already pecked its eyes out. Over the past two years, Besher has lost four calves and the cow to black vultures.

He’s not alone. One of his neighbors had a calf that survived having its eyes pecked out. He found it running across the field with no eyes, screaming and had to put it down, Besher said. Another neighbor managed to save a calf with no eyes.

“It’s going to do nothing but keep getting worse, I’m afraid,” Besher said.

Black vultures are the most common vulture in the Western Hemisphere, and their range extends from South America and now up to the Lake of the Ozarks, Missouri Department of Conservation Chief Ornithologist Sarah Kendrick said.

They’ve been permanent residents in the southern U.S. for a long time and were documented by John James Audubon in the 19th century. But their move into Missouri is relatively recent, and it’s causing problems for cattle producers in the lower third of the state.

They’ve spread north over the past decade as temperatures have risen and the proliferation of cellphone towers has given them convenient places to roost, Kendrick said. Turkey vultures, distinguished by their red heads, are common across Missouri.

Both are scavengers that eat carrion, but they find their food in different ways, Kendrick said. Turkey vultures can smell a dead animal from a mile away, and they use that sense of smell to find food. Black vultures don’t have a strong sense of smell and hunt based on sight. That can make them more aggressive, and they have been known to attack smaller animals such as young cows, sheep and other livestock, though they primarily feed on carrion.

They’ve also been known to damage cars, boats and buildings in search of food. Last summer, MDC warned of black vultures ripping up cars and boats at the Bagnell Dam Access at the Lake of the Ozarks.

Both black vultures and turkey vultures are protected by treaties the United States has with Canada, Mexico, Japan and Russia, which outlaw the killing of birds that migrate across national borders.

That means that when cattle producers see a black vulture attacking one of their calves, they can’t just shoot it without a permit. That’s frustrating for cattlemen, who have a lot of money invested in their herds and believe the treaties hamstring them and benefit a species that is in no danger of being wiped out.

A 2018 U.S. Fish and Wildlife study published in the Journal of Wildlife Management estimated there were 4.26 million black vultures in the U.S. It also estimated the population could sustain a take of up to 287,000 birds a year, though that level of take likely isn’t feasible and may not even significantly limit attacks on livestock.

There’s no law against harassing the vultures, and producers are often advised to try things such as hanging fake vultures as effigies or using noise-makers to scare them off. That’s not always practical for busy producers. Some ranchers practice the "shoot, shovel and shut up method," but the U.S. Fish and Wildlife Service does offer permits that allow producers who are losing cattle to black vultures to take small numbers of the birds.

Getting that permit has made a difference for Besher, who lost four animals to vultures before he got a depredation permit but only one since. His permit allows him to take 30 birds a year, but he’s only taken about 15 in total, he said. Hanging up the dead in effigy has seemed to be an effective means to keep them away, he said.

The permits don’t allow producers to reduce the population. Taking vultures is meant to be another form of harassment to drive them away, USDA WIldlife Services district supervisor Dan McMurtry said. The permits cost $100 for businesses and $50 for individuals, and Fish and Wildlife classifies farms as businesses, McMurtry said. Once they get the permit, the producers just need to renew it annually, paying the fee again.

Kentucky and Tennessee are each running a pilot program to try to streamline the permit process for ranchers. Each state’s Farm Bureau has its own permit. Kentucky Farm Bureau’s permit allows 1,500 takes, and it can give each producer between two and five permits, Commodity Director Joe Cain said. Producers don’t use all the takes they’re allowed. Kentucky Farm Bureau authorized about 1,350 last year, and producers only reported around 200, he said.

“Once the birds get shot at a couple times, they don’t let you get too close to them,” he said.

The Missouri Farm Bureau has been evaluating the Kentucky and Tennessee programs to see if it’s something they could do, too, Marketing Director Kelly Smith said.

To producers who are losing cattle, black vultures are a menace, putting their financial security at risk. At the same time, all vultures play a vital role in limiting the spread of diseases from animal carcasses, said Kendrick, the MDC ornithologist.

Vultures’ stomach acids are so strong that they can digest diseases such as botulism, leprosy and rabies, said Kendrick. When they eat contaminated carcasses, they remove those diseases harmful to humans and wildlife from the landscape, she said.

Kendrick said she understood the serious problems cattle producers are facing but emphasized the vital role vultures play in the ecosystem. In India, vultures died off in large numbers as they were poisoned by an anti-inflammatory drug used in cattle, which the vultures ate when they died. Dogs replaced vultures as the primary scavengers in India, causing outbreaks of rabies that kill thousands of people every year.

"I’m sympathetic to ranchers who have experienced loss, but black vultures are being black vultures,” Kendrick said. “They’re not evil; this is how they’ve adapted.”

Besher said he understands the vultures play an important role in eating carrion, he just wants them to stop attacking his cattle.

“We’re not wanting to wipe the things off the face of the Earth, because they do serve a purpose,” he said.