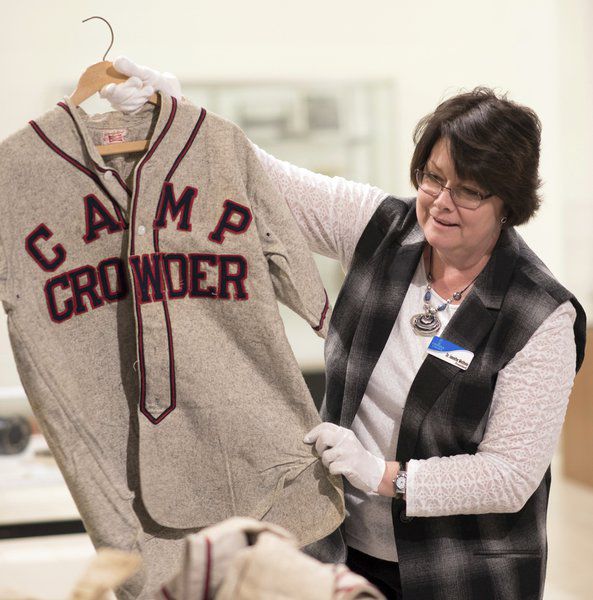 Jennifer Methvin, Crowder College president, displays a baseball jersey that was part of the contents of a time capsule from Camp Crowder. The time capsule was opened in Neosho on Thursday. Globe | Steve Wood 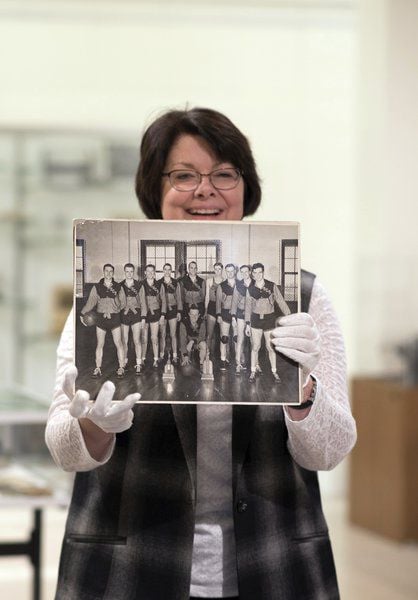 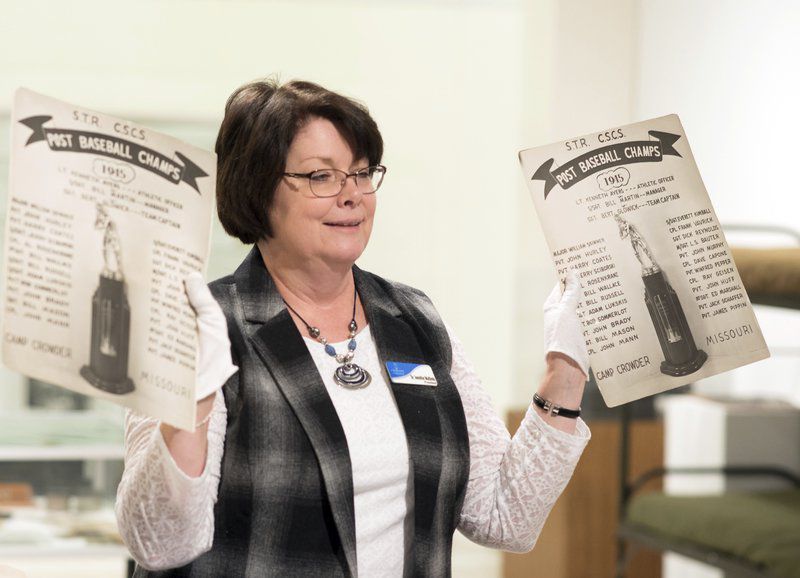 Jennifer Methvin, president of Crowder College in Neosho, displays baseball team rosters from 1945. They were in a time capsule from Camp Crowder that was opened Thursday. Globe | Steve Wood

Jennifer Methvin, Crowder College president, displays a baseball jersey that was part of the contents of a time capsule from Camp Crowder. The time capsule was opened in Neosho on Thursday. Globe | Steve Wood

Jennifer Methvin, president of Crowder College in Neosho, displays baseball team rosters from 1945. They were in a time capsule from Camp Crowder that was opened Thursday. Globe | Steve Wood

NEOSHO, Mo. — A time capsule donated to Crowder College containing two baseball uniforms and about 50 photographs from the World War II era was opened Thursday in the Longwell Museum.

The pictures and uniforms were donated to Steve Roark, president of the Newton County Tourism Council, by Lynn McHale, the daughter of William Martin, who was an athletic director at Camp Crowder about 75 years ago. Roark then donated the capsule to the college.

“We don't have too much here in the museum concerning the athletics that went on when this was Camp Crowder,” said Jennifer Methvin, Crowder College president. “So this is just exceptional that we will be able to share it with others, and for them to come in and see another part of Camp Crowder history is very exciting.”

Before Crowder College, the land was Camp Crowder, a single corps training center for the U.S. Army during World War II. The population of the camp during the war was about 45,000.

The men stationed at Camp Crowder created sports teams. The two jerseys donated to the college are both dirt-stained as McHale never washed them.

In a letter to Roark, McHale, who now lives in Illinois, wrote that the uniforms “hold real Camp Crowder baseball diamond dirt on them.”

McHale's father died in 2001, and she wanted to give the memorabilia from his time at Camp Crowder to an organization that would appreciate it.

"I just felt that it would serve more of a purpose if others could see it or use it," she said. "I just wanted to give back a part of history."

The front of one of the uniforms reads “Camp Crowder,” and the other reads “Giants.” Roark said too many people were interested in playing baseball for there to be only one team, so after the Camp Crowder team was full, they started taking famous teams' names.

In the college’s community center is a museum largely dedicated to Camp Crowder memorabilia. The museum holds bunk beds that would have been in the barracks, uniforms and other items.

“It’s a pretty rare occasion that a two-year college has such a museum as we do here that is so important to American history,” Methvin said. “Memorabilia from the athletics of Camp Crowder history, that’s something a little bit new for us.”

McHale mailed the items to Roark over the summer, and he decided to wait to open the package until it could be presented to the college.

“They were all so nicely wrapped in that box that I thought we would just kind of treat it as a time capsule and not open it until we got ready to display it at Crowder College,” Roark said.

The timing of the unveiling was scheduled to coincide with the beginning of an alumni weekend for baseball and softball players, which begins today.

“I was pleased and a little bit surprised of how nice everything was in that box,” Roark said. “It’s quite a nice thing.”

Attending the opening of the time capsule were head baseball coach Travis Lallemand and much of the baseball team.

“It’s just part of the history here, and I think it’s pretty neat to see this and to see those uniforms come out of the box,” Lallemand said.

Lallemand said he thought it was cool for the baseball players to see the old uniforms and to see how the game had evolved over the past 75 years.

Theran Crouch, a baseball player, said he liked the design of the uniforms but that playing in them would “get pretty hot, pretty fast.”

“It’s really special to have these guys’ jerseys,” he said. “This is not something you see every day.”

In addition to two baseball uniforms from the 1940s, the capsule included an array of photos from the same period. Sports featured in the photographs include baseball, basketball, boxing, swimming and wrestling.