For your health: COVID-19 vaccines are safe, effective 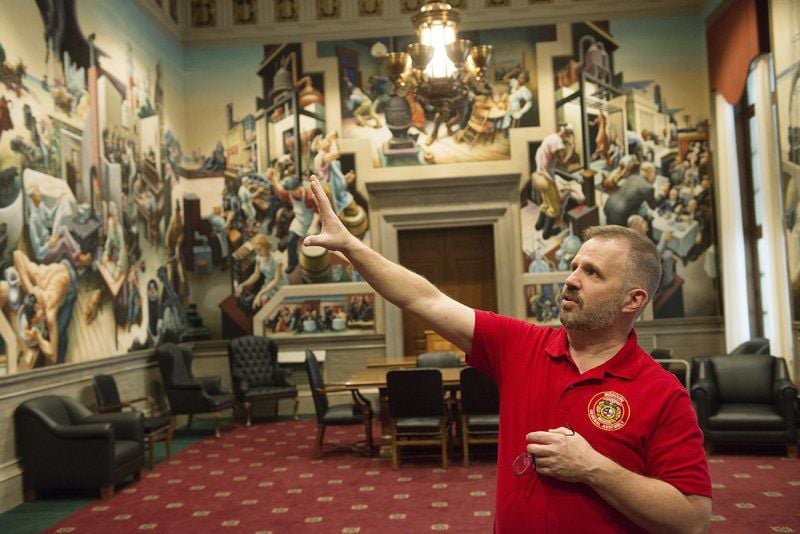 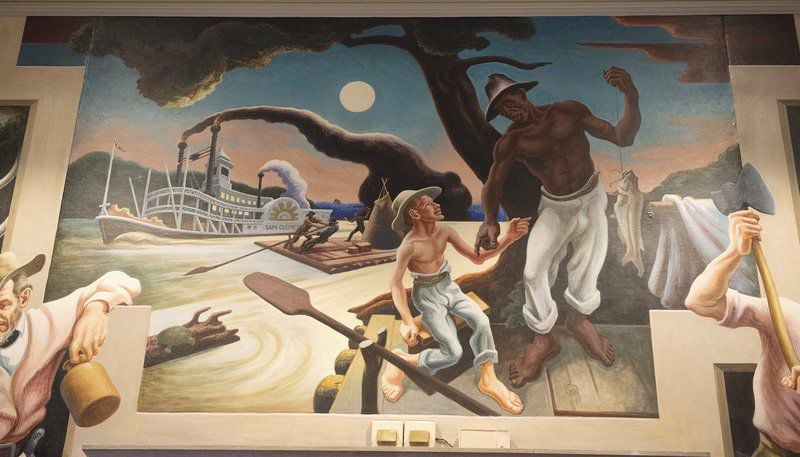 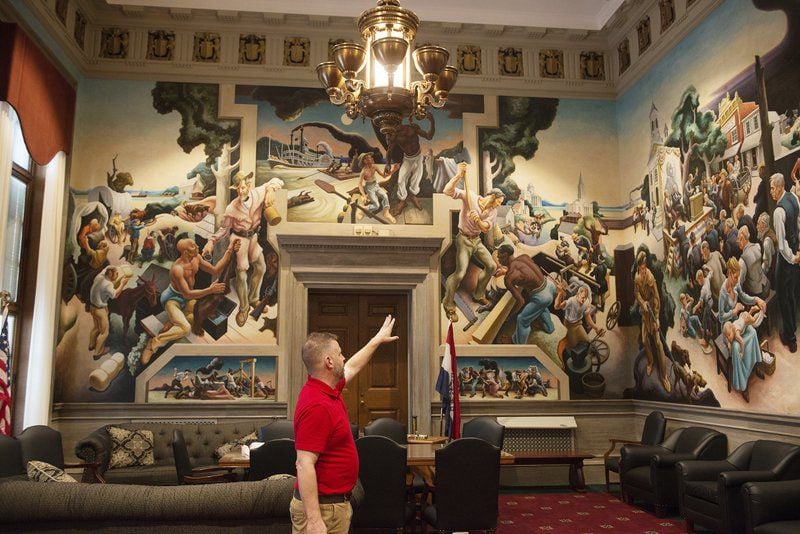 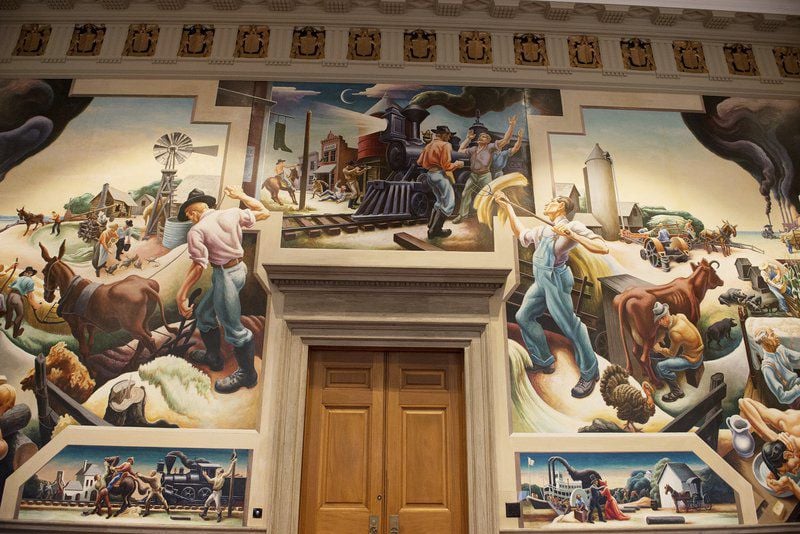 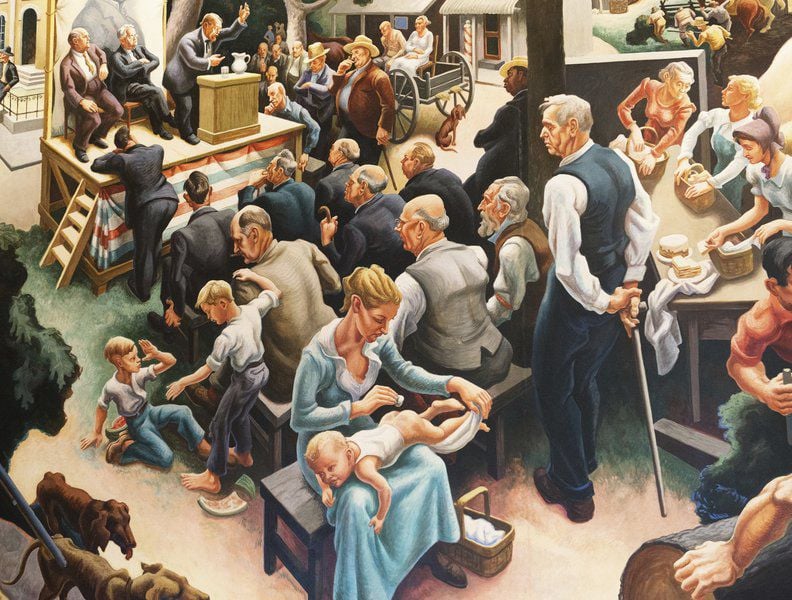 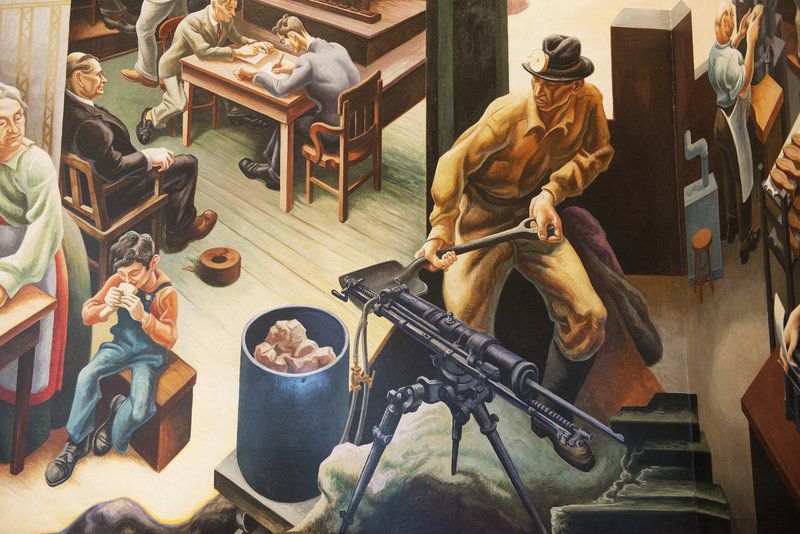 JEFFERSON CITY, Mo. — In the House Lounge on the third floor of the Missouri Capitol, Neosho-born artist Thomas Hart Benton gives visitors a larger-than-life look at the state’s history.

His “A Social History of the State of Missouri” guides visitors chronologically through the lives of everyday Missourians. Benton’s brush strokes take them back to the era of fur trading and trapping, through early farming, to a turkey shoot and even to a political gathering that includes a woman changing a baby’s diaper.

Other panels show a more mechanized Missouri, with scenes of coal mining, the cattle industry, farming with tractors and a steam boat.

Still other panels depicting slavery and the 1838 expulsion of Mormons from the western part of the state capture uglier aspects of Missouri’s history.

Benton’s famous murals have recently been cleaned and restored, and Capitol officials say they hope that the conservation will preserve his work for future generations.

Benton was born in Neosho on April 15, 1889, to Confederate veteran Maecenas Eason Benton and Elizabeth “Lissie” Wise Benton. His father was a lawyer who served in the U.S. House of Representatives, and his great-uncle — for whom Benton was named — was a U.S. Senator from 1821 to 1851.

“The Benton family was very engaged in politics at the state level and also at the national level,” said Dana Rademan Miller, chair of the Capitol Commission and chief clerk of the Missouri House of Representatives. “Politics ran deep in the Benton family.”

Benton’s brother, Nathaniel Benton, was involved in the social and political circles in Jefferson City during the 1930s, Miller said. One evening in 1935, Nathaniel brought his brother to a late night cocktail party at a hotel near the Capitol, and in the course of a casual conversation, Thomas Hart Benton proposed to a state senator that he be allowed to paint a Capitol mural.

“A week or two later, there was a line-item appropriation for him for the mural, and he got the commission,” Miller said.

The murals were commissioned by the legislature in early 1935 for $16,000 and completed in December 1936, Miller said. Benton spent the better part of a year traveling the state to find and sketch every person shown before painting them on canvas. There are 235 people depicted in his work.

“At the time, he was at the height of his fame as a regionalism artist that captured these themes from the Great Depression and of the Midwest particularly,” Miller said.

Because of some of the history and characters depicted — slaves being whipped to work in mines, political boss Tom Pendergast — the murals got a mixed reaction, with some Benton’s defenders arguing that everything in the murals was true, while critics said Benton had focused on the wrong stories from Missouri’s past. Some even wanted the murals covered up or destroyed, but the opposition soon died down.

After the murals were painted, the room that houses them continued for a while to serve multiple roles, including as a gathering place for legislators, a meeting room and a place to hold press conferences. Now, however, it is primarily a place for Capitol visitors to admire Benton’s work.

Two years ago, the Capitol Commission consulted professional conservators from ICA Art Conservation, a nonprofit art conservation center based in Cleveland, Ohio, Miller said. The group was recommended by the Nelson-Atkins Museum of Art in Kansas City to assess the condition of Benton’s murals, after Miller noticed that they had not had any attention for several years.

“They are a nonprofit that works primarily with Midwestern museums to help with conservation efforts,” Miller said. “It’s kind of hard to find people who are very qualified to do this sort of work.”

The Benton mural assessment sparked a proposal to have all of the murals in the building inspected, Miller said, including others not painted by Benton. In the end, around 75 murals throughout the Capitol were inspected for damages. The assessment on “Social History” alone took three days as conservators examined every inch.

“The nice thing is that our murals, we found out, were actually in pretty good shape,” she said. “We were afraid there would be a lot more deterioration and paint loss.”

Conservators from ICA worked on mural restoration within the building over the course of several months for a week or two at a time, Miller said. The Benton murals alone took about a week to a week and a half to restore, which primarily required carefully removing dirt, grime and smoke damage from the canvas.

Rich Beckwith, director of information systems at the capitol, said that part of “Social History’s” durability comes from the kind of painting technique Benton used, called egg tempera. Colored pigments mixed with egg yolk create a permanent and fast-drying paint, which Benton applied to the canvas that was later added to the wall.

“It really holds up over time, so in that sense it also made them a lot easier to maintain and clean,” Beckwith said. “They are also not 100 years old yet, so we’re a little ways from that. I hope I look half this good at 85.”

Miller said that the number of murals in the Missouri Capitol building make it unique, and putting forth the effort to conserve and restore the work is important for preserving the “snapshots in time” painted there.

“It’s something that is a legacy really for the future, for those who come after us,” she said.

Beckwith agreed, and though he is not a member of the Capitol Commission nor a historian, he has a personal interest in sharing the murals with visitors and “showing them off,” he said. Conserving the work also conserves its message.

“It’s not connecting with a glorious past. After all, we’re taking care of baby butts, right?” he said, referring to the image of a woman changing a baby’s diaper. “It’s connecting with our everyday person’s past. I think everything that Thomas Hart Benton did here was purposeful. He was trying to depict something that he felt was important about Missouri.”

Each year, fourth-grade students from all over Missouri visit the Capitol as part of their civics education, Beckwith said. They are always shown the House Lounge, giving them insight into the state’s history.

“I would like to know personally that 100 years from now, we’re still moving fourth-graders through this room, that they are able to see it,” Beckwith said. “We get visitors from all over the world in here, all over the United States, and they’re always amazed.”

Capitol visitors are welcome to visit the House Lounge at any time during regular business hours, 8 a.m. to 5 p.m. Monday through Friday, to view Neosho artist Thomas Hart Benton’s “A Social History of the State of Missouri.” Visitors are encouraged to call the Visitor Services Desk at 573-751-2854 before travelling to ensure that the room will be open.