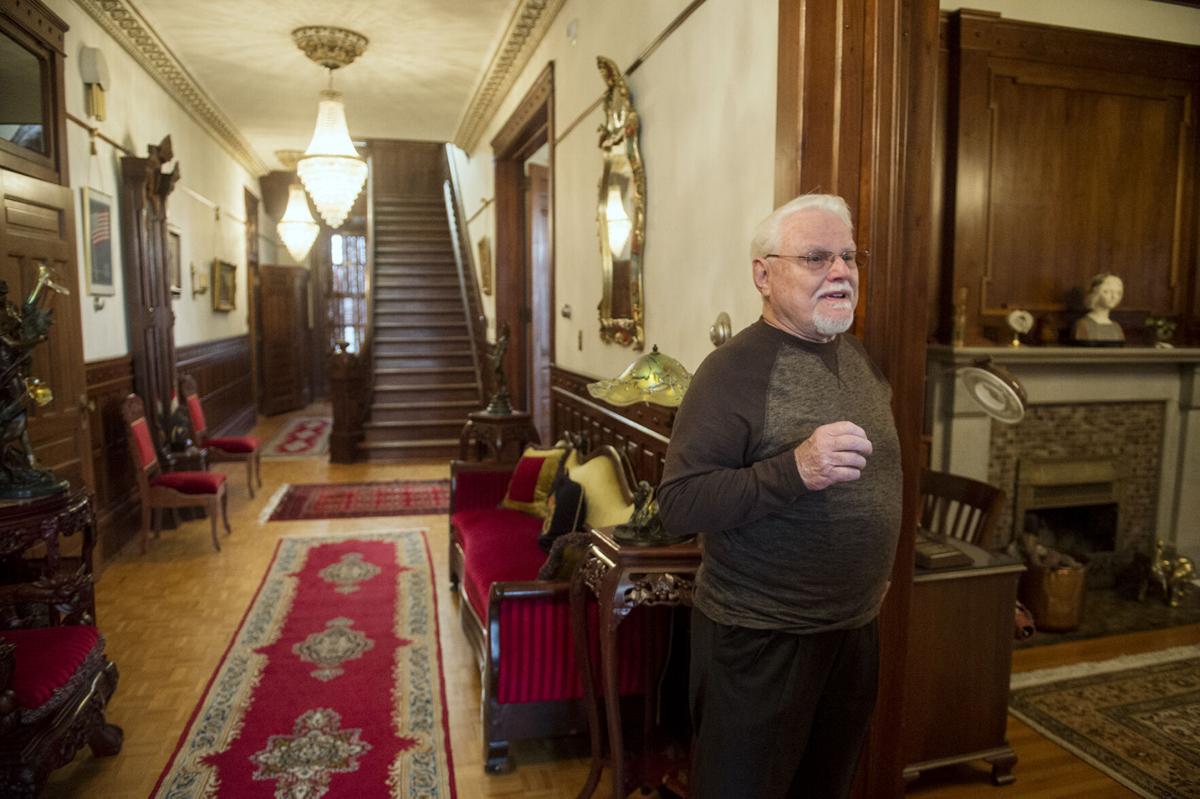 Ron Peterson talks about his family’s history with the Carter Mansion on Friday in Carthage. The historic home is on the market and has been getting attention nationally. Globe | Roger Nomer 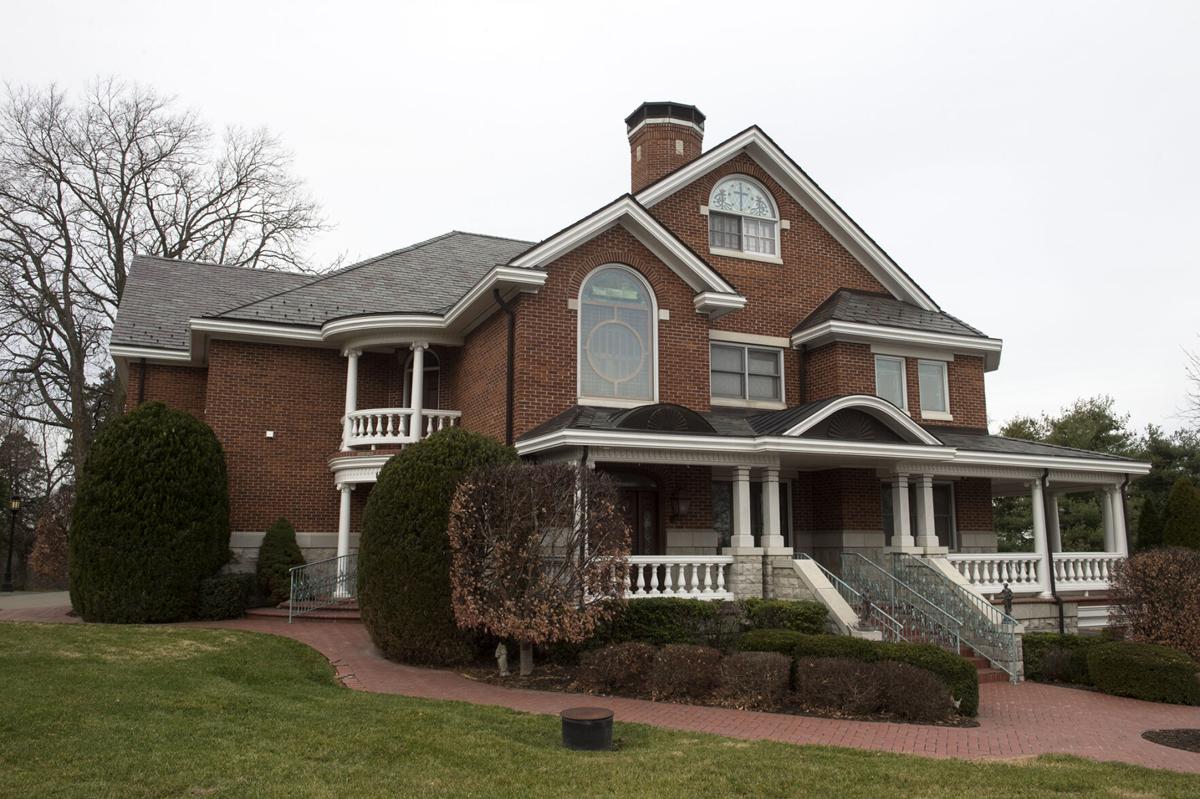 The Carter Mansion in east Carthage is currently up for sale. Globe | Roger Nomer 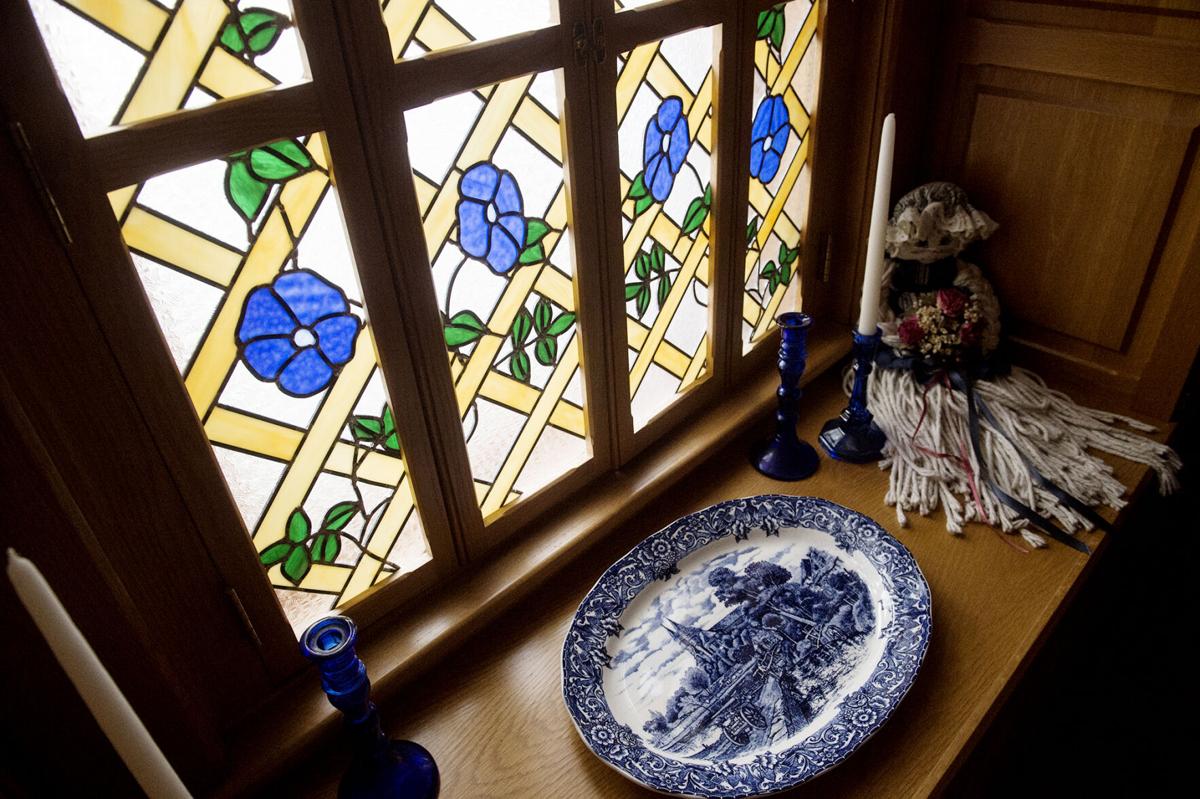 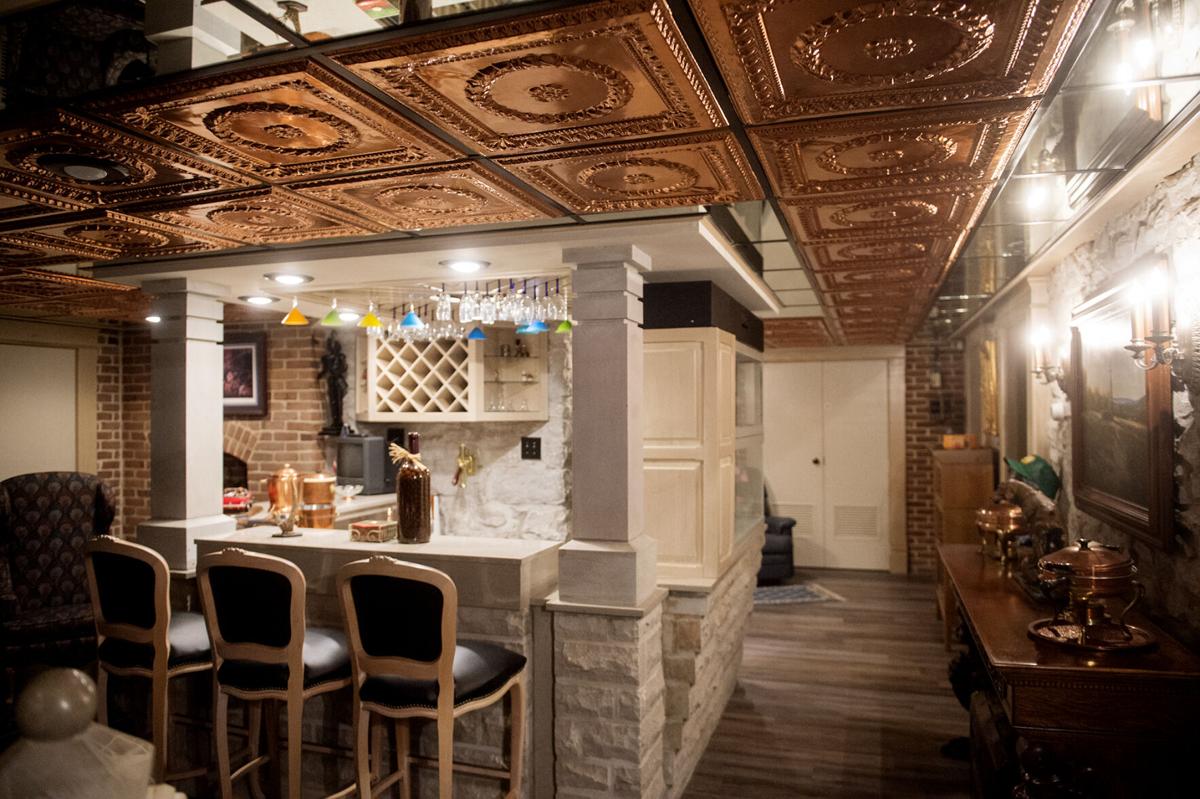 A copper ceiling is a striking feature of the basement space at the Carter Mansion. 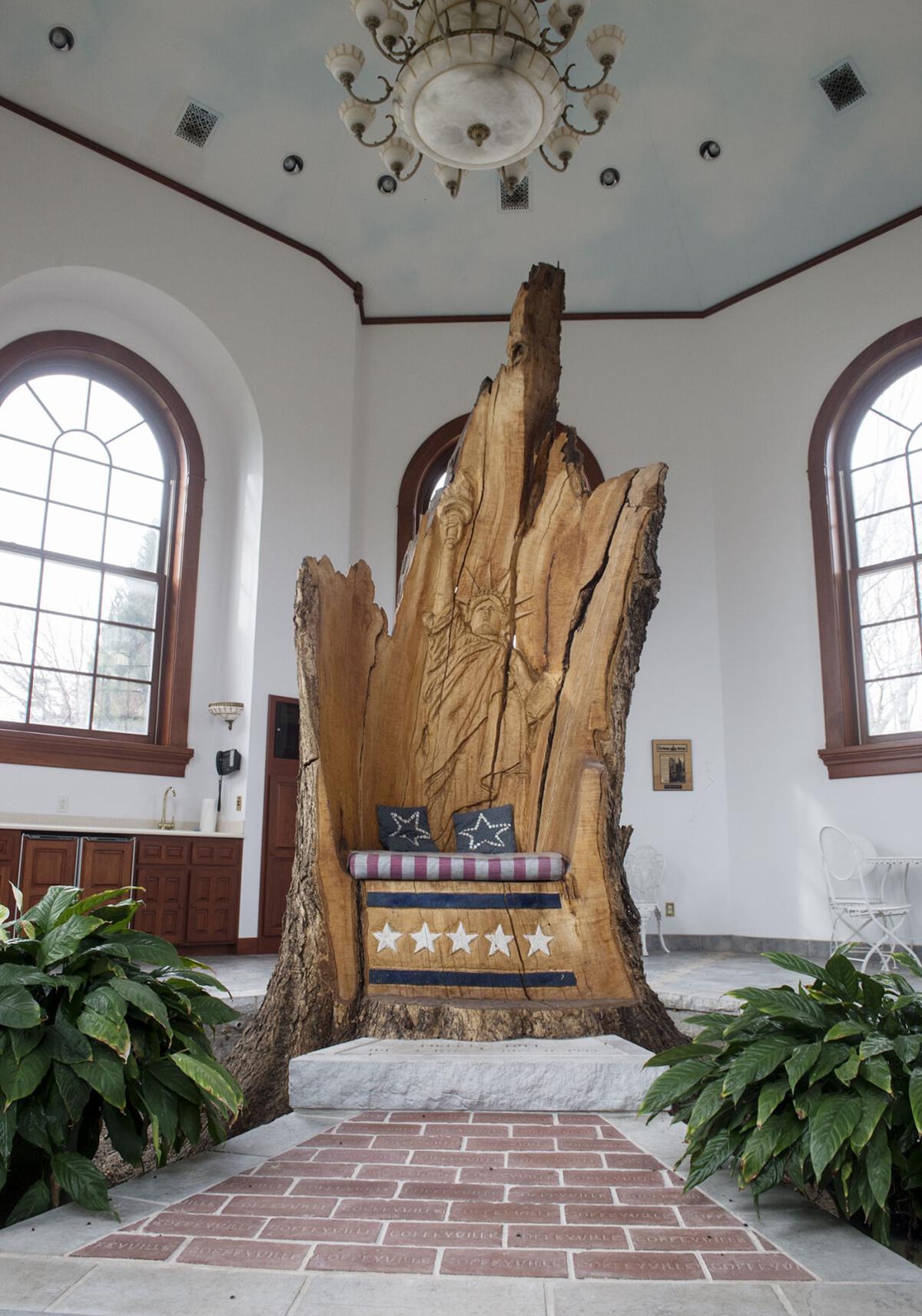 The Liberty Tree Shrine at the Carter Mansion showcases the trunk of a historic sugar maple tree.

Ron Peterson talks about his family’s history with the Carter Mansion on Friday in Carthage. The historic home is on the market and has been getting attention nationally. Globe | Roger Nomer

The Carter Mansion in east Carthage is currently up for sale. Globe | Roger Nomer

A copper ceiling is a striking feature of the basement space at the Carter Mansion.

The Liberty Tree Shrine at the Carter Mansion showcases the trunk of a historic sugar maple tree.

CARTHAGE, Mo. — One of Carthage’s most historic homes is on the market, and its listing on an online real estate company has gained national attention.

Ron Petersen Sr. and the Ruth I. Kolpin Foundation, named in honor of his mother, have decided to sell Carter Estates, a compound on East Chestnut Avenue that includes the restored 1880s home of Dr. John Carter, one of the first physicians to live in Carthage during the Reconstruction period after the end of the Civil War in 1865.

The listing, which only recently went live on the real estate website Zillow, was featured on Dec. 28 on the Facebook page and Twitter feed for an online newsletter called “Zillow Gone Wild,” which features what it calls “the best of Zillow.” The post has more than 1,200 comments and has been shared more than 850 times, and it was featured in The Kansas City Star.

“It deserves the attention, it really does,” Petersen said Friday during a tour of the home with the Joplin Globe. “This is not a small farmhouse you’re selling here — this is a historical place, and at the same time, my mother really made it beautiful just in the time she spent doing all this. It was a labor of love; she loved the property very much.”

Petersen said his mother rented the home when they came to Carthage in 1963 and bought the radio station KDMO-AM 1490. That station and the FM station that Kolpin and Petersen would start shortly thereafter were all broadcast from the first floor of the house, which is still known as the “Radio House” by many in Carthage.

Petersen said Mayse and Potter Construction owned the home at the time, and shortly after Kolpin took over, they offered to sell it to her.

“My mother bought it, and she could see as time went on that the place needed some tender loving care,” Petersen said. “The only way she was going to do that was to move the radio station out, so in 1979, we moved downtown where we’re presently located.”

Before she started renovating the home, Petersen said Kolpin bought the old Frisco train depot that stood for years in the railroad yard at Frisco Bottoms and had it moved, stone by stone, to its current location just northeast of the Carter Mansion.

She renovated the train depot into a home and moved into it while she renovated the Carter home. The depot still has a bedroom and other living spaces in the old freight handling rooms, along with old wooden pews in an area that was likely the lobby.

Just north of the depot is a restored caboose. Peterson said it was an original Frisco Railroad caboose that was numbered 1201, the address of the Carter Mansion, so his mother had to have it.

Renovating historyOne of the first things Kolpin did when she turned her attention to the Carter home was remove the white paint from the brick exterior walls of the home. She also restored the black walnut woodwork and the ornate plaster ceilings, and she restored the rooms all the way to the attic, which she turned into a living space of its own.

She also gutted the basement, which Petersen said was a dank and dirty place at first. One room in the basement was apparently a lab used by Carter to compound his own pharmaceuticals, a practice that was relatively common among physicians in the 19th and early 20th centuries.

Petersen pointed out a heavy stone desk in a room that Kolpin made into a family room.

“This room has Dr. Carter’s compounding desk where he compounded all his prescriptions,” Petersen said. “It’s remained there since who knows when. That’s Dr. Carter’s lab. The desk is built into the building and made of stone. You’d never want to move it. This was the lab room. He probably had chairs and tables in there. He was quite the guy.”

Kolpin moved back into the mansion after it was renovated and lived there for years. Petersen said his mother decided she wanted to build a garage for her car, but like most of her ideas and projects, this one grew.

“Eventually she built the carriage house, a home with an elevator to all three floors. She had visions of having a place she could convalesce. She knew in her older years she might need a place because she couldn’t navigate these stairs forever. She decided then she would expand it and kept adding on and adding new ideas to the plans until it was a little larger than the Carter Mansion, actually.”

Standing in front of the Carter Mansion is a large gazebo that covers the stump of a huge maple tree shaped into a throne.

Petersen said his mother was very proud of two large sugar maples that stood in front of the Carter Mansion. The trees were certified by the state of Missouri as bicentennial trees in 1976, me aning they were old enough to have lived in 1776 when the United States was born. In 1998, a storm blew through Carthage and took one of them down. Kolpin was very upset, her son said.

“I said, ‘Mom, look at the silver lining: You can take that tree, saw it into lumber, dry it in a drying shed and maybe build something with it,’” Petersen said. “That’s all it took. It wasn’t long before she had built that gazebo around that tree to memorialize it.”

Petersen said his mother used the gazebo as a place to entertain and installed an ice maker, refrigerator and tables and chairs along the circular walls around the stump. The second maple had to be removed after it died and became a hazard.

Peterson said the decision to sell the property was hard, but he thinks it’s the right decision.

Much of the proceeds from the sale will go to the Kolpin Foundation, which will continue to be used to memorialize his mother.

He said his family and the Ruth Kolpin Foundation considered keeping the property and turning it into a bed-and-breakfast, with proceeds from rentals going to the foundation, but they realized that wasn’t feasible.

“It’s bittersweet, but there’s no way that we could take care of this property,” Petersen said.

“It was tough to make that decision, but now that I’ve made it, I think it’s the right decision. I really do.”

A tour of the Carter Mansion in Carthage