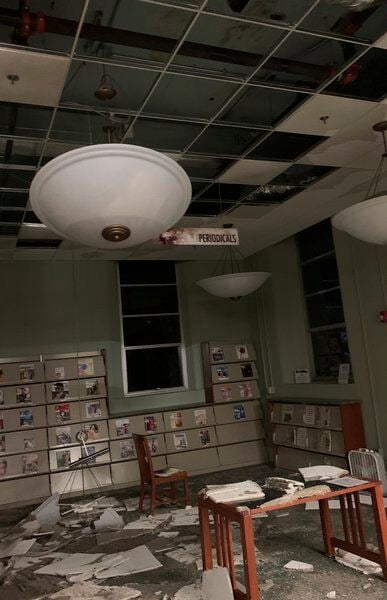 The periodicals section of the century-old area of the Carthage Public Library was damaged July 12 when sprinkler heads ruptured overhead. Courtesy | Julie Yockey 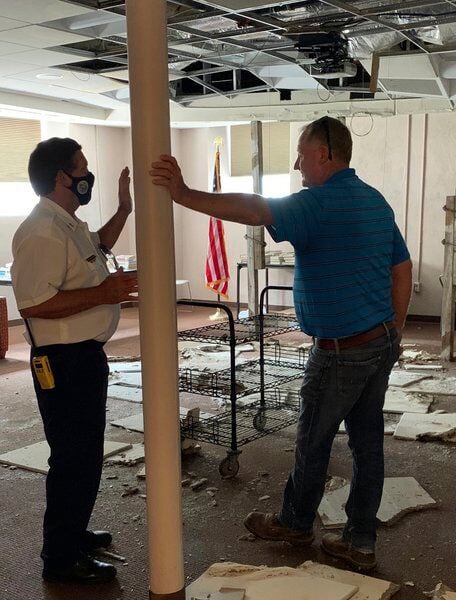 Carthage fire Chief Roger Williams (left) and contractor Randy Dubry, with Randy Dubry Construction, look over the damage in the community room of the Carthage Public Library on Sunday, July 12, in Carthage. Two fire sprinkler heads ruptured and flooded the old section of the library with an estimated 100,000 gallons of water. Courtesy | Julie Yockey

The periodicals section of the century-old area of the Carthage Public Library was damaged July 12 when sprinkler heads ruptured overhead. Courtesy | Julie Yockey

Carthage fire Chief Roger Williams (left) and contractor Randy Dubry, with Randy Dubry Construction, look over the damage in the community room of the Carthage Public Library on Sunday, July 12, in Carthage. Two fire sprinkler heads ruptured and flooded the old section of the library with an estimated 100,000 gallons of water. Courtesy | Julie Yockey

A malfunction in the fire suppression system in the old section of the Carthage Public Library has caused thousands of dollars in damage to the 120-year-old building and forced the library to throw out thousands of dollars worth of books, children’s items and audio-visual equipment.

The accident happened late in the night of July 12.

Library Director Julie Yockey said quick action by the Carthage Fire Department and a contractor prevented worse damage, but an estimated 100,000 gallons of water poured through the building before the situation could be brought under control.

“We love our firemen,” Yockey said. “They worked their guts out for me for hours doing things they wouldn’t have had to do. We brought in Servpro that night, and they’ve been working to get the water out ever since.”

Yockey said the damage is heaviest in the original Carnegie Library portion of the building.

She said the cause of the malfunction was difficult to determine.

She said the sprinkler heads were installed in 2006, but that part of the library has seen renovations and repairs at least twice since then and that it’s possible the vibrations of that work shook something loose.

Total damage estimates were still being worked out as of Friday, but the losses in material were heavy, Yockey said.

“It ruined the genealogy section, the hallway that used to be the original entrance, all the magazines and newspapers, part of the audio-visual department, all the carpets upstairs in the original library,” Yockey said. “The ceiling tiles fell in and the lights fell, and then it flooded downstairs in the community room.”

Yockey said the community room, a meeting room in the basement of the original library, was being used for storage, and most of the material and equipment in there was destroyed.

“Because of COVID, we’re in a unique situation; we have to quarantine all our books and materials for five days when it’s returned by patrons,” Yockey said. “So we were keeping them in the community room. There were tables with stacks and stacks of books, all lost.”

Sherri Luce, director of the children’s library section, said all the toys, games and manipulatives were stored in the community room, and they're a total loss.

Luce said the library staff has worked hard moving items out of the damaged section of the library, cleaning up, all while keeping curbside service for patrons to continue to use the main collection of books and material going.

“I think we only closed for two days completely, so we’ve been busy,” Luce said. “Our staff, they’re such troopers, even through all of this, they worked on moving stuff out of the affected areas, discarding things that were completely disgusting that they had to handle and get out to the dumpsters.”

Randy Dubry, contractor and owner of Randy Dubry Construction of Carthage, was putting the finishing touches on the new Steadley Family Legacy Center, a building that’s nearing completion immediately east of the main library, when the accident happened.

Yockey said Dubry and his workers are helping with cleanup and reconstruction.

Dubry and insurance adjuster Eric Faust, with MoPERM, said on Friday that the damage is extensive but is repairable.

They estimated it would take about three to four months to make repairs, but the repairs can’t start until the building is dry.

“We need to make sure everything is dry inside those 120-year-old walls,” Dubry said. “That’s the biggest challenge. Any moisture at all that's still in those walls can come back and cause damage. That’s why we’ve got Servpro still onboard with us. They’re testing walls as we tear them down, and I won’t put it back together until I get their approval.”

JOPLIN, MO - Gary D. Copeland, 59, a driver for Republic Services, passed away Monday, August 3, 2020. Services are planned for a later date. Arrangements are under the direction of Ozark Memorial Park Crematory, Joplin.