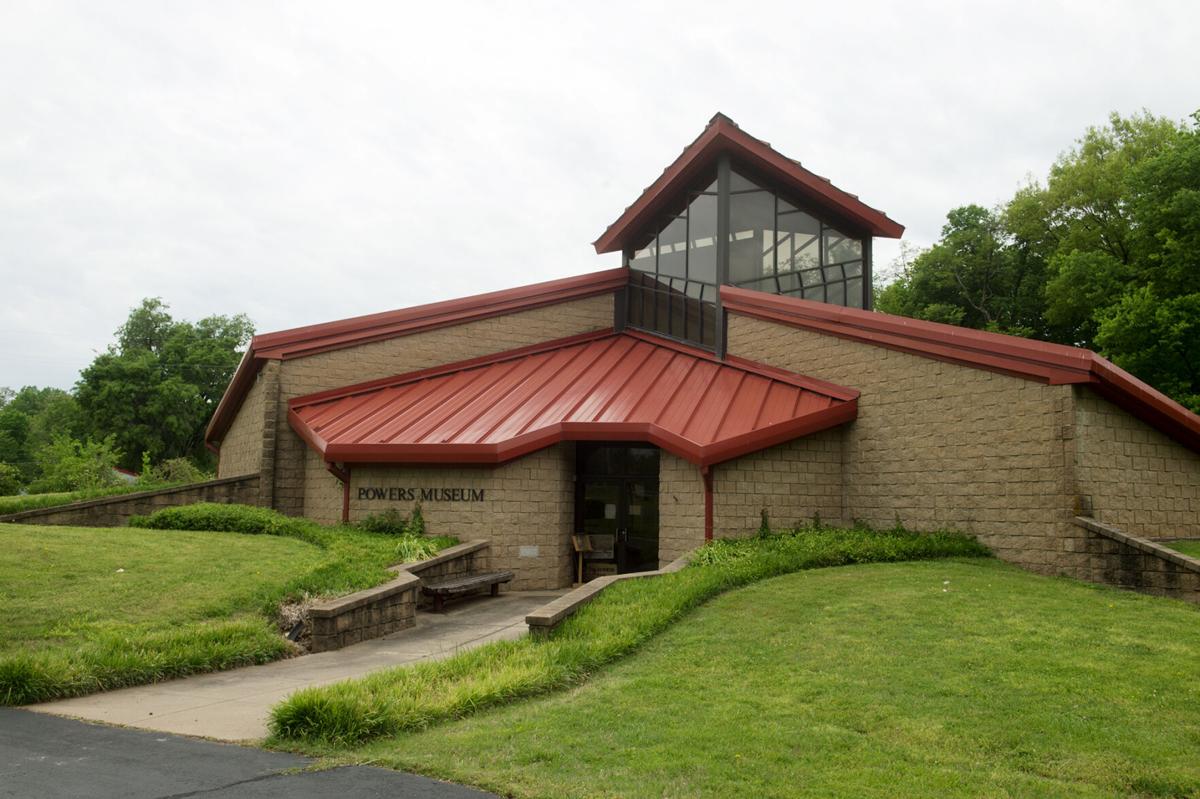 The Powers Museum in Carthage is closing, and the building will go to the school district. The building and grounds are at 1617 Oak St., just across Oak Street from Carthage Municipal Park. 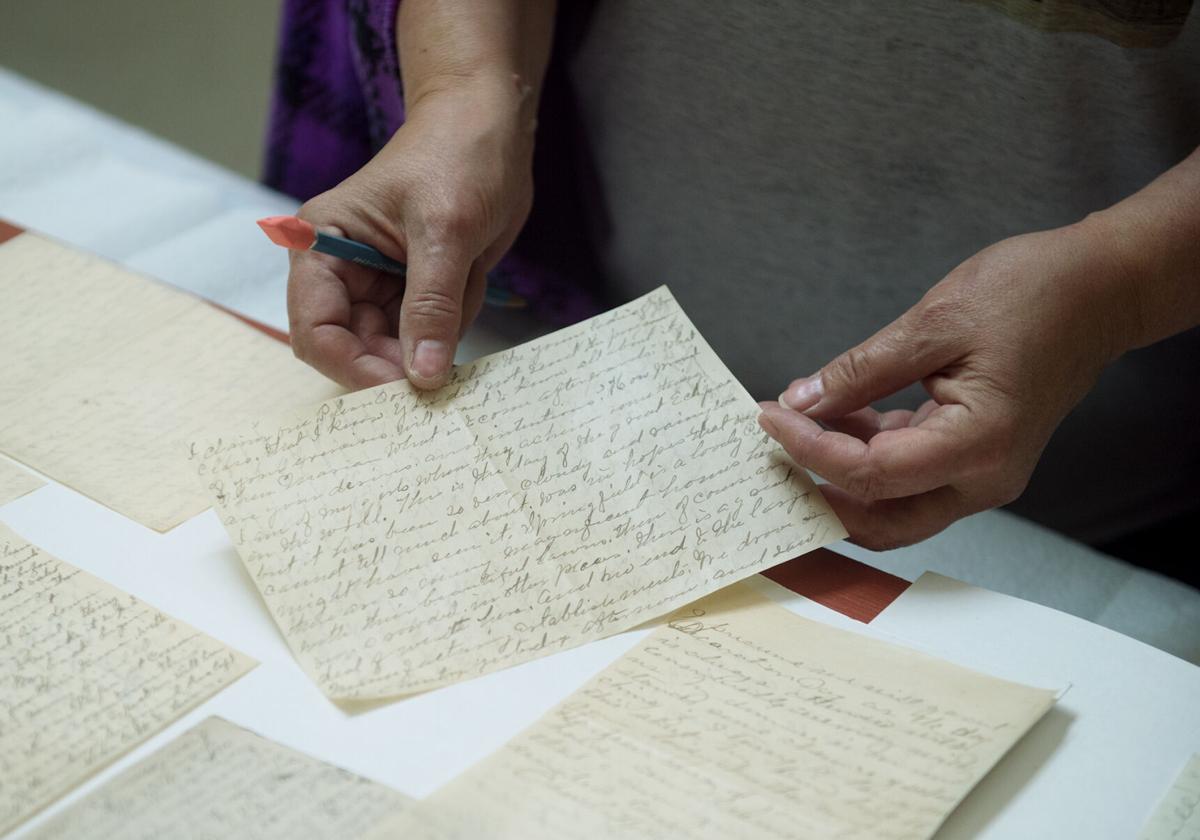 Michele Hansford assembles family correspondence from the archives at the Powers Museum in Carthage. The museum board is looking for new homes for parts of its collection. GLOBE | ROGER NOMER 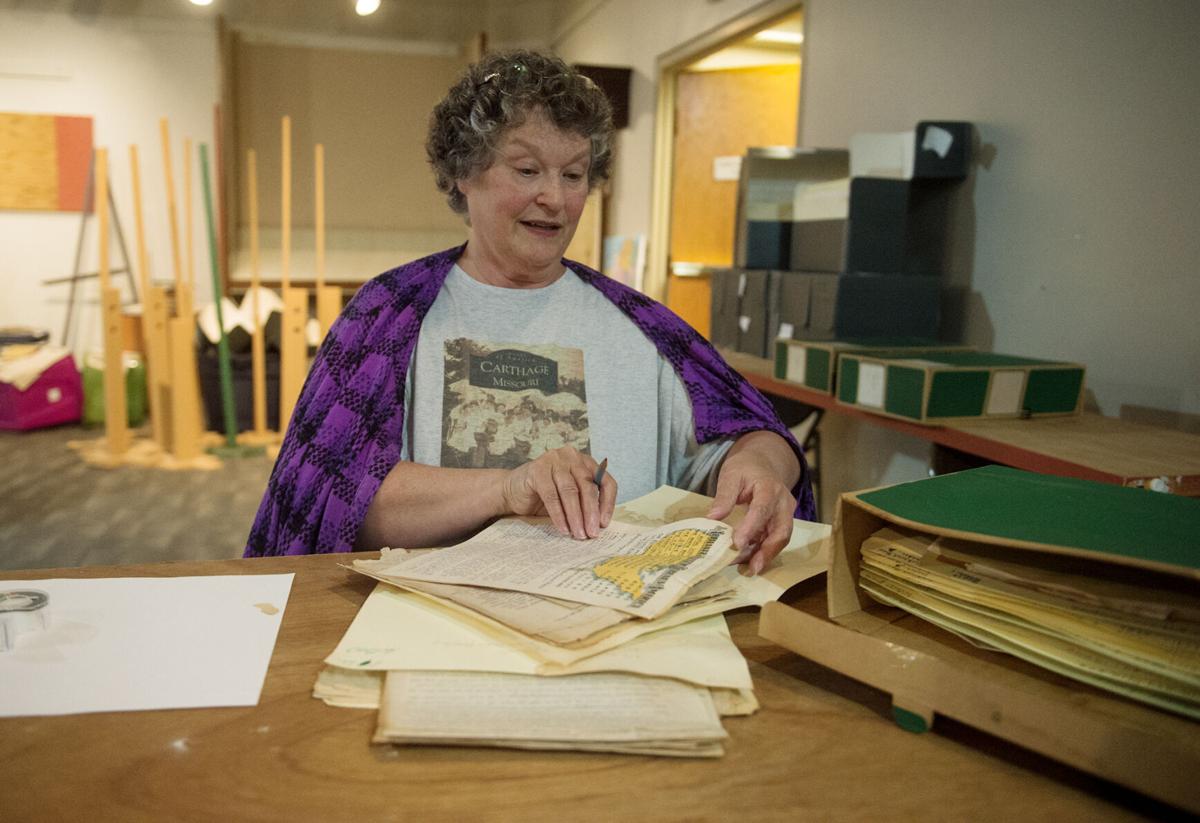 Michele Hansford on Tuesday checks the condition of documents at the Powers Museum (below) in Carthage. The museum has been struggle financially for some time, but the pandemic was the final straw. The museum’s board will auction part of the collection in August and plans to transfer the building to the Carthage School District. GLOBE | ROGER NOMER

The Powers Museum in Carthage is closing, and the building will go to the school district. The building and grounds are at 1617 Oak St., just across Oak Street from Carthage Municipal Park.

Michele Hansford assembles family correspondence from the archives at the Powers Museum in Carthage. The museum board is looking for new homes for parts of its collection. GLOBE | ROGER NOMER

Michele Hansford on Tuesday checks the condition of documents at the Powers Museum (below) in Carthage. The museum has been struggle financially for some time, but the pandemic was the final straw. The museum’s board will auction part of the collection in August and plans to transfer the building to the Carthage School District. GLOBE | ROGER NOMER

CARTHAGE, Mo. — For 38 years, the Powers Museum has offered glimpses into Carthage history from the point of view of everyday residents, a view of life that happened between the historic and cataclysmic events that make for big headlines in the news.

The museum has struggled in the past few years with a shrinking endowment and falling income. Then came the COVID-19 pandemic.

“Income was not meeting expenses, and it has dropped drastically in the past year,” Powers board member Duane Griffith said. “We haven’t had much in donations to meet the bottom line, and our net loss since July is $13,000.”

“COVID really killed it,” added board President Kavan Stull. “We just couldn’t do anything with COVID. Everything just shut down.”

Board members say the museum has enough money to keep the lights on and pay for insurance for about two years, so they’ve made the decision to shut down operations and create scholarships with whatever money is left over after disposing of parts of the museum’s collection.

The Carthage School District will take over the museum’s building and grounds at 1617 Oak St. Carthage, just across Oak Street from Municipal Park.

The board plans to sell some of its collection at an event at Carthage’s Memorial Hall on Thursday, Friday and Saturday, Aug. 19-21.

Board members are working to re-home items in the collection that it won’t sell.

“The hardcore Carthage material in our collection, we’re trying to re-home it in Carthage,” said retired museum Director Michele Hansford, who still serves on the Powers board. “If it has state significance, it may end up with a state organization. If it has regional significance, it may end up somewhere else. We’re not selling off Carthage photos, postcards, things like that. We’re trying to find homes for as much of this as we can so they can still be used and seen locally.”

Hansford said the Carthage Public Library and Jasper County Records Center are looking at items from the museum’s archive of documents, books, photos and letters.

The Joplin Museum Complex took some of the clothing representing early 20th century fashions in the area.

The museum’s archive of soldier interviews will be moved to Missouri Southern State University and the federal Library of Congress.

Hansford said the Powers Museum opened in its current building in 1988, although it had started offering programs and events as far back as 1983.

Winchester left a bequest to the city for the museum upon her death in 1981.

Winchester’s belongings, clothes and other items made up the initial collection for the museum, but the collection expanded with donations from other current and former residents.

The museum also maintained an extensive reference library and was typically open during the summer and closed in the winter to change out the exhibit and do maintenance work on the building.

The museum was governed under the umbrella of the Carthage City Council, which appointed members of its board, although the museum never received any money from city taxpayers, Hansford said.

“We’ve shown a lot of Carthage history over the years through exhibits and activities,” Hansford said. “We had a lot of programming off-site, on-site; we were very active in the Maple Leaf Festival; we held a ragtime music festival, powwows, reenactment. We were a community partner. Besides our mission here, we were an active community partner.”

In 2016, Hansford retired after more than 30 years with the museum. A not-for-profict group, Friends of the Powers Museum, was created to take on management of the museum and operation separated from the city umbrella.

Stull said the museum then offered exhibits marking the 100th anniversary of the end of World War I in 2018 and 2019. The exhibit displayed how the end of the Great War was marked in Carthage and how it affected the community.

An exhibit called “Growing Up in Carthage,” exploring childhood in Carthage in the 20th century, was planned for 2020, but the COVID-19 pandemic meant the museum could not open at all last year.

At a Jan. 28, 2021, meeting, the board decided to start winding down operations, legally close down the not-for-profit group and transfer the building to the Carthage School District.

Carthage Superintendent Mark Baker said last week that the Board of Education is still working with the Powers board to finish transferring the building to the district.

He said plans for the building are still being developed and that the district is hoping to create a place to help kids who “are on the bubble of graduation, but outside forces are driving their decisions away from formal education.”

“We had a traditional alternative school for many years called You-Turn Academy,” Baker said. “However, You-Turn slowly transitioned into Virtual Learning Center due to so many classes being taught online. Although our students definitely need VLC, we are missing an opportunity to help more kids to succeed without a true alternative learning situation. An alternative school was discussed during Carthage 2020 and Beyond multiple times.”

Carthage 2020 and Beyond was a series of strategic planning meetings held with the public in 2019 to decide on the district’s long-term goals and objectives.

Baker said the district doesn’t want to re-create the traditional alternative school where enrollment is assigned because of behavioral issues.

“They are many kids without behavioral issues in our high school who slowly fall through the cracks, just can’t adjust to high school life or have home issues that contribute to lack of academic success,” Baker said. “We want to provide an alternative learning setting for those kids. I’ve been looking for a location to house this program for long time. Through the grapevine, I heard the Powers Museum was shutting down. After a few conversations with Powers Museum representatives, we concluded the building could be a fantastic place for an alternative learning situation. Plus, what a great way to honor the Powers family.”