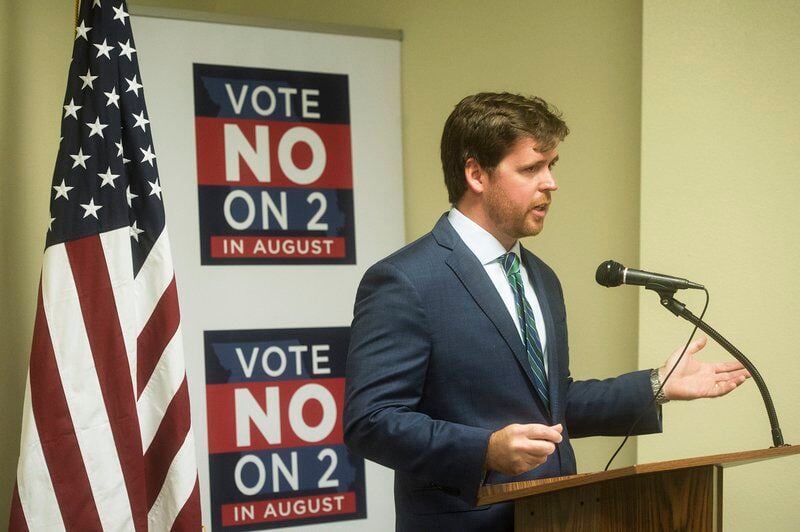 Scott Fitzpatrick, Missouri state treasurer, speaks against Medicaid expansion last month at the start of a several-stop tour around the state. He and state Rep. Cody Smith, both Republicans, started the tour at Joplin Alpha Air Center.GLOBE | ROBER NOMER 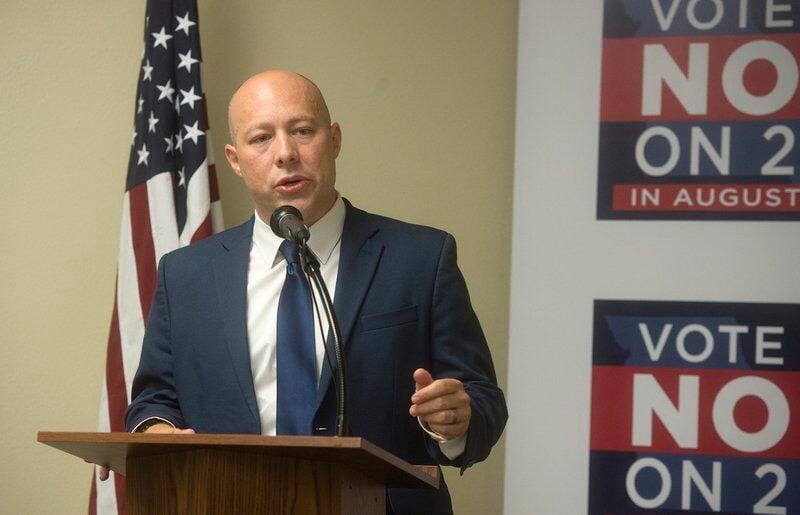 State Rep. Cody Smith, of Carthage, speaks July 27 at Joplin Alpha Air Center against Amendment No. 2 that would expand eligibility for Medicaid in Missouri. The amendment will be on the election ballot Tuesday.GLOBE | ROBER NOMER

Scott Fitzpatrick, Missouri state treasurer, speaks against Medicaid expansion last month at the start of a several-stop tour around the state. He and state Rep. Cody Smith, both Republicans, started the tour at Joplin Alpha Air Center.GLOBE | ROBER NOMER

State Rep. Cody Smith, of Carthage, speaks July 27 at Joplin Alpha Air Center against Amendment No. 2 that would expand eligibility for Medicaid in Missouri. The amendment will be on the election ballot Tuesday.GLOBE | ROBER NOMER

While Amendment 2 supporters tout economic gain, Missouri’s chief financial officer and the lead appropriator in the Missouri House of Representatives insist Medicaid expansion, if approved by voters Aug. 4, would have devastating effects on the state budget.

State Treasurer Scott Fitzpatrick and Rep. Cody Smith, of Carthage, who also serves as the House budget chairman, traveled throughout the state Monday telling voters of the short- and long-term effects Amendment 2 could have on the state budget. The tour was kicked off Monday morning at the Alpha Air Center in Joplin and ended in Jefferson City, Missouri.

“Proponents of Amendment 2 are currently spending millions of dollars across the state in an effort to try to convince folks to vote in favor of it,” Smith said. “In all of that vast campaign and messaging, they’re leaving out some very critical details. First, the cost of Medicaid expansion would be staggering. Second, there’s no plan whatsoever to pay for it. There’s no funding mechanism that accompanies Amendment 2.”

Amendment 2 would deliver health care to an estimated 230,000 additional Missourians. The ballot proposal would expand eligibility under the terms of the federal health care law signed by President Barack Obama in 2010. This would increase the income eligibility requirements to $18,000 a year for adults or $30,000 for a family of three.

Children in low-income families make up 63.5% of Medicaid participants while those with disabilities account for 46% of spending, the largest share. In state fiscal year 2018, total spending for the program was approximately $10 billion — funded 53% by federal money, 21% by state general revenues, and the balance by provider taxes and other funds, according to the Missouri Department of Social Services.

According to research from Pew Charitable Trusts, Missouri is a top-five state for general revenue spending on Medicaid. The state estimates it will need an additional $88 million in general revenue through fiscal year 2021 due to COVID-19.

In recent months, the state’s general revenue budget has been cut by more than $1 billion due to the pandemic, Smith said, including elementary school funding, college scholarships and support services.

Smith said Medicaid covers approximately 40% of the state’s overall budget, which includes federal funds. The state would contribute 10% of the expansion costs, and the estimated cost is $2 billion, according to Fitzpatrick. This would mean the state would pay about $200 million, which Fitzpatrick said will only continue to increase annually.

“Expanding Medicaid is going to put even more pressure on the state budget,” Fitzpatrick said. “I believe that Missourians are smart enough to know that there’s no such thing as a free lunch. Medicaid expansion is no different.”

Smith said the cost of the state’s overall existing Medicaid program grows by hundreds of millions of dollars per year consistently. “It’s grown exponentially in the last decade, and expansion would only add to that.”

The Missouri Department of Social Services, which oversees the state’s Medicaid program, recently testified at a budget committee hearing that expansion would cost $15 billion to taxpayers in the first five years, according to Smith.

Smith said expansion proponents the measure will bring taxpayer dollars back to Missouri that now go to other states like California and New York. He said that’s simply not true.

Fitzpatrick said that the state, depending on the month, currently has between 900,000 to 1,000,000 people on Medicaid. He mentioned how the program was originally designed to protect the most vulnerable population — those with disabilities, the elderly, those who cannot work — but Medicaid expansion would potentially add up to 300,000 people to a program he described as already strained in the state budget.

Supporters believe Medicaid expansion could add funds to Missouri’s economy to protect health care jobs and save the state money.

A 2019 study by the Center for Health Economics and Policy at Washington University in St. Louis suggests that Medicaid expansion would save the state $932 million by 2024 and as much as $1.3 billion by 2026, with the additional federal dollars offsetting current state health spending.

Thirty-seven states have adopted Medicaid expansion measures, including Oklahoma, which narrowly approved the state question by less than a percentage point on June 30. Democratic state auditor and gubernatorial candidate Nicole Galloway in a statement said that Oklahoma’s passage of Medicaid expansion is a positive sign for Missourians.

“I have every confidence that Missouri will be the next state where voters do what the politicians haven’t, and vote to expand Medicaid,” Galloway said. “I support Medicaid expansion because it will give roughly a quarter-million Missouri families access to insurance, create tens of thousands of jobs, save our rural hospitals and spur economic activity at a time when we need it most.”

The Missouri Chamber of Commerce’s president and CEO, Daniel Mehan, has expressed support for Medicaid, saying expansion would create more than 16,300 jobs annually in the first four years of the program.

“Let’s not miss this chance to bolster our economy during this recovery while expanding access to health care for our fellow Missourians,” Mehan said in a statement.

Smith said the chamber is looking at the short-term benefits of Medicaid expansion, but the longer term consequence of tremendous expansion of federal deficit spending is troubling.

“I don’t think we’re talking about that enough,” Smith said. “When that bill comes due, it will have a devastating effect on Missouri’s economy, and the chamber of commerce will certainly have an interest in that at some point in the future. Again, it’s about a shortsighted take on it, in my opinion, that we just want to think about the immediate impact and not the longer-term impact.”

WEBB CITY, MO - Randy Mitchell, 62, passed away on Friday, August 7, 2020. Memorial visitation will be held on Saturday from 10 a.m. until 12 noon at Hedge-Lewis-Goodwin Funeral Home in Webb City.