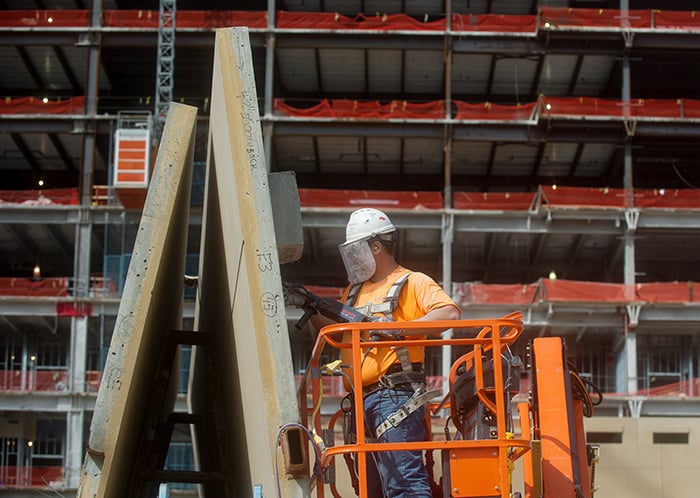 Joel Barett prepares one of the panels for the exterior of Mercy Hospital Joplin. The new hospital is being hardened to withstand a large tornado. A new study by the American Society of Civil Engineers recommends ways tornado-prone communities can harden some of their buildings. 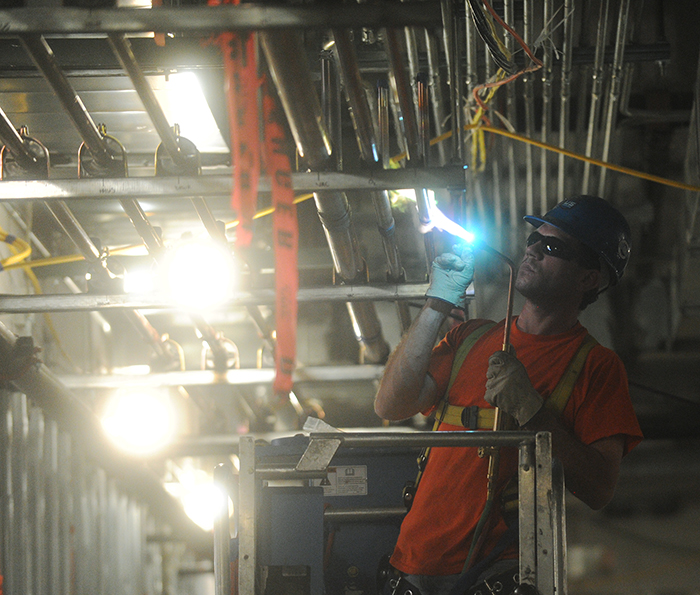 Jamie Chronister welds some of the many miles of pipe that are going into the new Mercy Hospital Joplin. The new hospital will contain many features to help it withstand a large tornado. 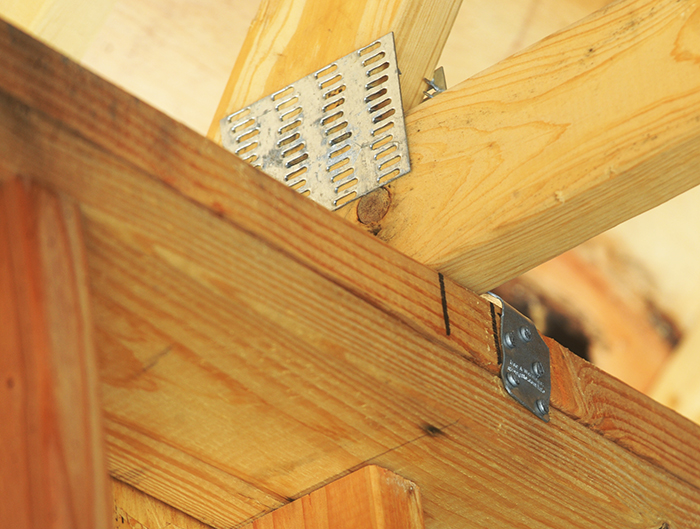 Tornado clips, like these going into a building near 24th Street and Connecticut Avenue, will help strengthen buildings during a future tornado.

Joel Barett prepares one of the panels for the exterior of Mercy Hospital Joplin. The new hospital is being hardened to withstand a large tornado. A new study by the American Society of Civil Engineers recommends ways tornado-prone communities can harden some of their buildings.

Jamie Chronister welds some of the many miles of pipe that are going into the new Mercy Hospital Joplin. The new hospital will contain many features to help it withstand a large tornado.

Tornado clips, like these going into a building near 24th Street and Connecticut Avenue, will help strengthen buildings during a future tornado.

It did not take much wind to flatten houses in the Joplin tornado zone because so many were poorly constructed to withstand wind, according to a study released recently by the American Society of Civil Engineers.

An investigative team of engineers sent to Joplin found that more than 83 percent of the damage on May 22, 2011, was caused by winds of 135 mph or less, which is equal to the maximum wind speed of an EF-2 tornado.

Only 4 percent of the damage could be linked to an EF-4 tornado, which can have winds speeds ranging from 168 to 199 mph. The ASCE investigators found no EF-5 level tornado damage to buildings at all.

The findings of the ASCE damage-assessment team are based on five days of surveying damaged homes, critical buildings, such as St. John’s Regional Medical Center, and school and commercial buildings in a six-mile segment of the tornado’s path in Joplin. The total path was 22 miles. The team used sophisticated data collection methodology that documented damage and assessed the causes of failure to more than 150 buildings. More than 7,000 structures were destroyed or badly damaged by the tornado.

The engineers concluded that because the structures were so poorly built to withstand wind, flying debris from houses made damage in the tornado zone much worse.

Had the houses in the tornado zone been built with hurricane ties — metal clips that fasten the rafters and trusses to the exterior walls of a house — the damage would have been much less. It is one of the recommendations coming out of their analysis.

“The study team believes that a relatively large number of buildings could have survived in Joplin if they had been built to withstand hurricane winds,’’ said Bill Coulbourne, a member of the ASCE engineering team that came to Joplin.

“They would not survive the winds of an EF-4 or EF-5 tornado, but they could survive lower wind speeds by using hurricane ties and by strapping the house to the foundation.’’

Coulbourne, who has studied tornado damage at Moore, Okla., Greensburg, Kan., and Tuscaloosa, Ala., said: “There’s a whole lot about tornadoes we don’t know about. But we are going to push for some areas of minimum design load with the 2016 version of the (ASCE) building code to build structures that are tornado resilient. We think it’s a matter of time before these recommendations are adopted.’’

The ASCE findings will not change the National Weather Service’s classification of the Joplin tornado as an EF-5, with peak winds of 200-208 mph.

Bill Davis, head of the NWS station at Springfield, said, “This does not surprise me at all. There was only a very small area of EF-5 damage in Joplin.

“It is not easy to put a rating on these things. There is a bit of subjectivity. But we knew right off the bat that there was EF-4 damage. It took us longer to identify the EF-5 damage and that it would take winds of 200 mph to do that damage.’’

The ASCE report confirms that the tornado’s maximum wind speed was around 200 mph.

The report indicated that nearly 13 percent of the damage in Joplin was caused by winds of 138-167 mph, consistent with an EF-3 tornado. The report states that much wind wrecked East Middle School.

The report also states that EF-2 level winds took out Joplin High School, which was thought to be where some of the worst wind damage occurred. In fact, some of the strongest winds were in areas south and northeast of the high school.

The team found no evidence of building damage from winds at 200 mph or greater, the minimum threshold for an EF-5. The study concluded that EF-5 ratings were nearly impossible to observe given the high construction quality threshold that must be met for determining that level of wind speed.

According to the ASCE study, it is believed that wind speeds in hurricane-prone regions are similar to those in tornado-prone areas when the tornado has the intensity of an EF-2 tornado (110-137 miles per hour).

The team said there is a difference in the wind of a hurricane and that of a tornado. Both have straight-line winds, but tornadoes have winds that create uplift or vertical suction that will pull a poorly-connected roof off of a house. The uplift for a typical roof-to-wall toe-nailed connection is 105 mph, depending on the building size and configuration, the report noted. That is in the range of an EF-1.

Houses in Florida, where hurricanes are frequent, are now designed to create continuous structural load paths vertically from the roof down to the foundation. Metal clips that fasten the rafters and trusses to the exterior walls promote that design.

After surveying Joplin’s tornado damage, Steve Cope, the city’s building inspector, recommended — and the Joplin City Council approved — the use of hurricane-clips on every rafter and truss in new post-tornado construction. The ASCE study recommends that practice be implemented throughout tornado-prone areas.

“We made that adjustment because of what we had seen,’’ said Cope. “You have to keep the roof on the house. If you don’t, it won’t hold together.’’

Another Joplin building code change involved the spacing of anchor bolts that attach a building’s wood frame to the foundation. The code change puts those anchor bolts four feet apart instead of six feet. The engineering team found that many of Joplin’s houses were not bolted to a foundation. The uplift pressure of the wind can exceed the weight of the house at approximately 125-135 mph. If the house is not lifted, it can be pushed off its foundation.

“Many of Joplin’s houses were holding themselves down,’’ said Cope.

Another code change strengthens the masonry of the foundation by reinforcing it with metal bars.

Cope, who was obtaining a copy of the ASCE report on Friday, said Joplin has already adopted many of the recommendations in the study. But he intends to examine it closely to see whether other building code recommendations should be brought to the City Council.

“I want to see this report because it is clear we got examined really close,’’ he said.

Cope said the report about Joplin’s tornado damage builds a case for stronger construction codes and it is likely the report’s recommendations will be subject to discussion by civil engineers and others. If the recommendations are incorporated into building codes, building design in terms of wind resistance could be strengthened from the current maximum of 90 mph to 150 mph.

What this means, Cope said, is that lessons learned from Joplin’s tornado could eventually lead to the creation of a new standard for home construction in tornado-prone areas.

“It will cost more money to make these changes,’’ said Davis, with the NWS. “But what’s your life worth?’’

Just as patients entering the destroyed St. John’s Regional Medical Center often were scanned to help determine their medical condition, the engineering team used laser scanners to collect information about St. John’s itself because they could not get direct access to the structure. The team took nearly 8,750 images of the damage.

Their research led them to conclude that critical structures in tornado-prone areas, such as schools and hospitals, should have safe shelters in them.

The new Mercy Hospital Joplin will be among the first of its kind in the nation: A hospital that has been hardened to withstand a large tornado. Features will include tougher brick and cast-concrete skin, windows that can withstand high winds, and more.

FEMA-approved shelters capable of withstanding EF-5 winds also are being incorporated into Joplin’s new and existing schools, and into many area schools.

Coulbourne also said more research needs to be done on the damage that occurred at big-box structures. In the case of Home Depot, the roof failed, causing the exterior concrete walls to fall inward, crushing people inside.

According to the report: “The team could only survey the damage to Wal-Mart and Home Depot shopping centers from a distance due to access restrictions. However, the research team believes that these box-shaped commercial buildings lack sufficient redundancy and material strength to provide protection from tornadoes, and in-store tornado shelters (or safe rooms) should be added.”

“We need to find ways to better tie the roofs to the walls,’’ Coulbourne said.

The ASCE report noted there are “a great number of similar buildings in the current building inventory, and their poor performance under tornado-loading conditions presents a significant threat to public safety. It is recommended that detailed structural failure analysis be conducted on damaged structures to find retrofit measures.’’