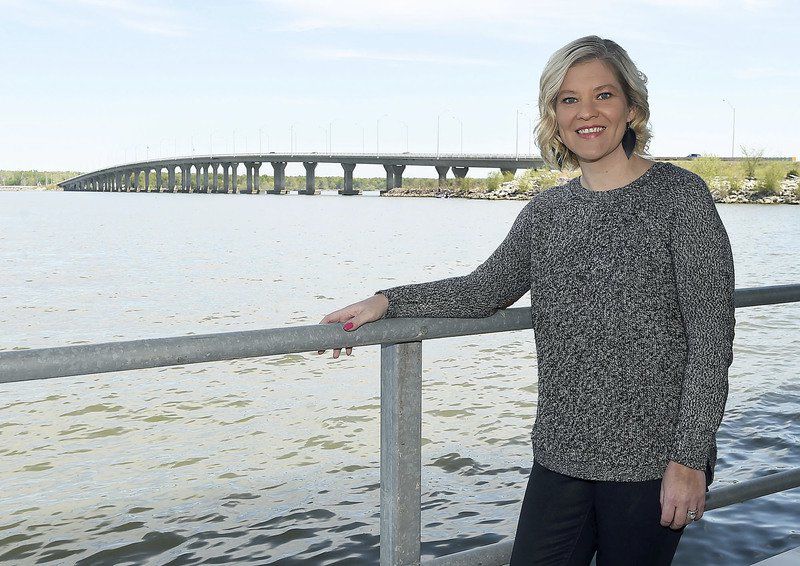 After spending four days on a ventilator after contracting Covid-19, Jennifer Andrews is happy to be recovering lakeside near Sailboat Bridge on Grand Lake. Globe | Laurie Sisk 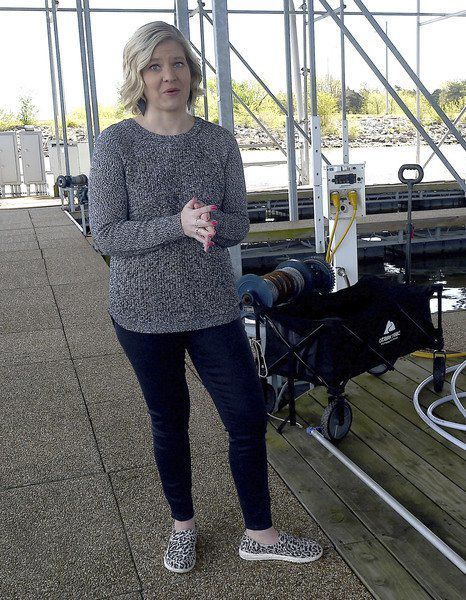 Jennifer Andrews talks about her recovery from Covid-19 near Sailboart Bridge on Saturday in Grove. Laurie Sisk/Globe 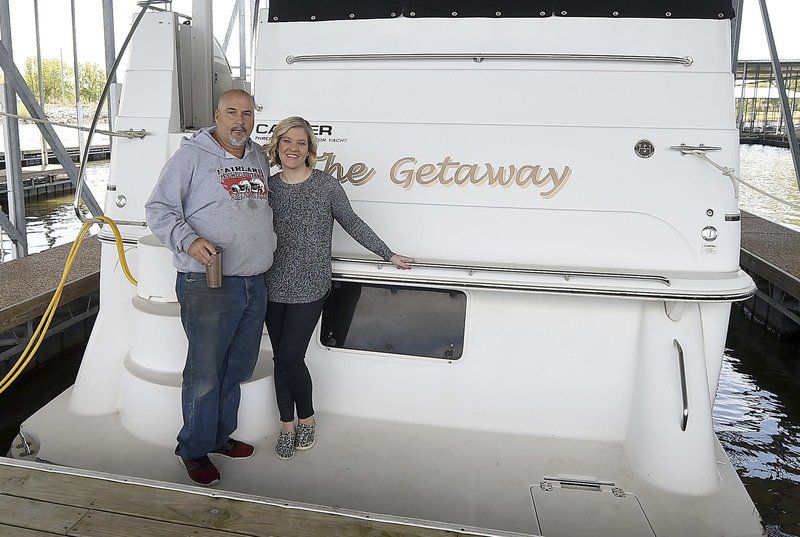 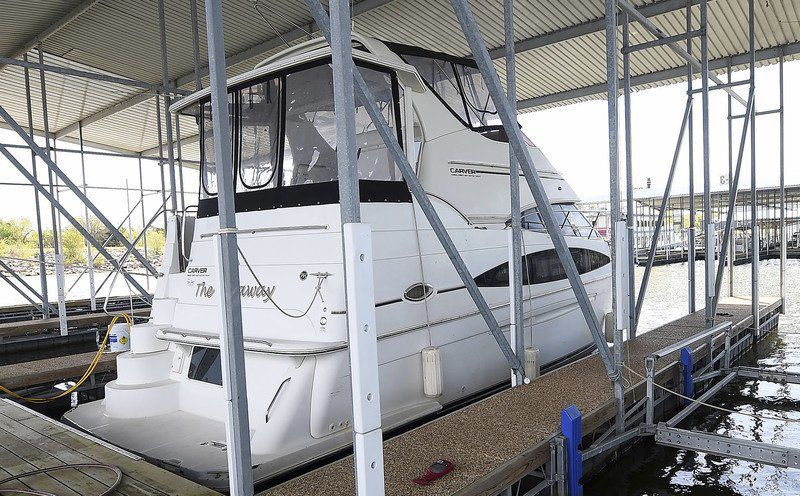 James and Jennifer Andrews' boat, "The Getaway" provides a comfortable quarantine for Jennifer as she recovers from Covid-19. 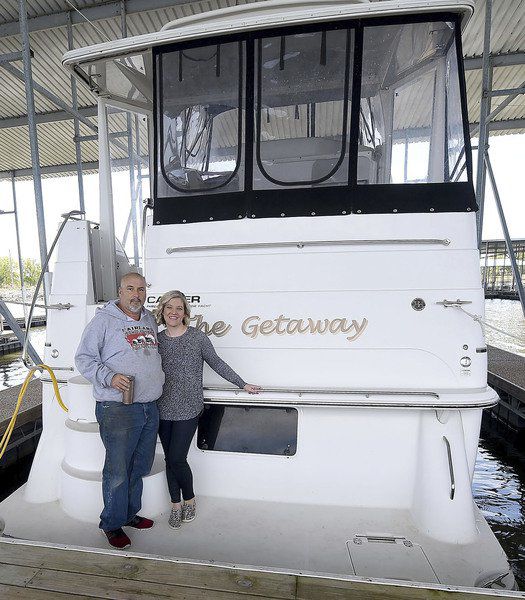 After spending four days on a ventilator after contracting Covid-19, Jennifer Andrews is happy to be recovering lakeside near Sailboat Bridge on Grand Lake. Globe | Laurie Sisk

Jennifer Andrews talks about her recovery from Covid-19 near Sailboart Bridge on Saturday in Grove. Laurie Sisk/Globe

James and Jennifer Andrews' boat, "The Getaway" provides a comfortable quarantine for Jennifer as she recovers from Covid-19.

GROVE, Okla. — Jennifer Andrews is a nurse who is used to helping others in their time of need.

In March, the tables turned as she was diagnosed with COVID-19. Dismissed from Mercy Hospital Joplin on Monday, Andrews is recovering at home in Northeast Oklahoma. She is grateful she is alive.

“God saved me from this for a reason,” she said. “My kids, husband and apparently someone else in the world still needs me.”

For the past 18 years, Andrews has worked as a nurse in either a hospital setting or as an infectious disease nurse for the Ottawa County Health Department. In November, she made a career change, becoming a case manager for Grand Lake Mental Health Center office in Jay, Oklahoma.

She chose the nursing profession because she loves helping people.

“I’m such a people pleaser,” she said. “I love to help, plus I always knew I would be able to find a job because they always need nurses.”

Her husband, James, on the other hand, laughed when she decided to go back to school.

Recalling the conversation, she said, “He said, 'How can you become a nurse, you faint at the sight of blood.' But I made it through, starting multiple IV’s without fainting. The rest is history.”

A native of the Miami, Oklahoma, area, Andrews has always lived and worked in Northeast Oklahoma, with the exception of a few high school years in Claremore, Oklahoma.

Married for 20 years, she and her husband have five children: Tyler, 18; Canaan, 11; Hudson, 8; Madilynne, 5; and Taylor, a daughter who died as an infant from sudden infant death syndrome. Jennifer honors Taylor with a wrist tattoo of her name.

On March 19, after two positive cases of COVID-19 occurred among co-workers, Andrews was directed to begin working from home. She was only around one of the two co-workers, for what she describes as “a minute, and from more than 6 feet apart.”

On March 21, the family stocked up on groceries at a local store. The next day, they went to church at Crossroads Church in rural Fairland, Oklahoma. From that point on, the family self-isolated at their home, located between Fairland and Grove, Oklahoma.

On March 30, she began to have a cough. Because she was without a fever, she thought it was caused by allergies rather than COVID-19.

“I’ve never been a huge sufferer of allergies, but when the pollen count is high, I get a tickle (in my throat),” she said.

The next day, when she woke up having breathing issues, she made an appointment with her doctor.

“By the time I got to the appointment, I knew something was wrong,” she said. “I was struggling to get air. It just started with a cough, a little sore throat, some shortness of breath and then nausea and abdominal pain.”

She was prescribed an inhaler, cough medicine and something for the nausea to treat the symptoms. It would take three days before she learned her COVID-19 test was positive. Throughout the process, Andrews never ran a fever.

By April 4, she was feeling better. Her husband suggested the family take advantage of a sunny day to self-isolate on their boat at the former Royal Bay Marina near Sail Boat Bridge in Grove. For the next two days, the family spent time on the lake. Andrews said the boat is their getaway from the world.

On April 6, the family slept in. James Andrews took their son, Tyler, back to their home so he could do some distance learning. Then he returned, and they had a late breakfast/early lunch.

As James, Canaan and Hudson worked on the outside of the boat, Madi and Jennifer sat in the sleeping quarters talking and painting their nails. Jennifer put Madi down for a nap, reading her a story. That's when she began struggling to breath. She used her inhaler twice. At about 12:30 p.m., Andrews asked her daughter to get her dad.

“It felt like forever for him to get down to the quarters,” she said. “Those minutes felt like a lifetime.”

Initially, James Andrews called the doctor’s office for advice. When her breathing got worse, he made the decision to dial 911. By the time she stepped on their dock, she found she couldn’t walk.

She said she remembers her husband picking her up and carrying her from their boat slip to the parking lot — a distance of at least 150 to 200 feet. The last thing she remembers is sitting in their car, hearing the approaching ambulance sirens.

For James Andrews, the time that passed between calling the authorities and watching them load his wife into the ambulance seemed like an eternity. He did not know then it would be a full week before he saw her again.

“It was very nerve-wracking and scary,” he said. “For the first several hours, to be honest, I didn’t know if she would live or die. It was that close.”

After taking his children home, James Andrews drove to the INTEGRIS Grove Hospital parking lot. At that point, he learned by phone doctors were still assessing his wife's condition.

“I knew the hospital was on lockdown, but some how I felt like I needed to go there,” he said.

Realizing he couldn’t get in and that all future updates would be by phone, he drove home to be with his children. He answered their questions as best he could based upon their ages and ability to handle the information.

“We spent a lot of time praying,” he said. “It was quite an experience. I pray none of my friends go through this.”

Two hours later, he called the hospital to check on her status. The person who answered the phone indicated that she wasn't there.

“He panicked, thinking someone would come knock on the door,” she said, picking up the story. “Twenty minutes later, a hospital official called James to tell him they believed I had been transferred to Joplin.”

Somehow, in the confusion of her transfer, she said she arrived at Mercy Hospital Joplin as a Jane Doe. They only knew her first name was Jennifer.

When James Andrews called Mercy, he was able to identify her over the phone using the tattoo of Taylor’s name.

“COVID is making normal procedures so different,” she said. “My insurance information never got connected to me.”

After 24 hours, a Mercy nurse gave James Andrews a tough, but honest update.

“She said Jennifer would have a tough time, but she was strong and young,” he said. “I’ll be honest, I thought her recovery would take weeks. I’m amazed at how well she’s doing. It’s a night and day difference.”

For James Andrews, the most difficult part of the experience was the helpless feeling he had during the week she was in the hospital.

“I’m a fix-it guy, and there was nothing to fix,” he said. “Fortunately, I got to talk to a lot of doctors, nurses and respiratory therapists who talked and reassured me.”

Jennifer Andrews woke up on April 10 at Mercy Hospital in Joplin. She thought it was a Monday, until her nurse — a friend and former colleague — said, “Sweetie, you got here Monday. Today is Friday. You’ve been on a vent. You are a little better, but you are going to stay a few more days.”

She has since learned her oxygen levels required medical officials in Grove to put her on a ventilator. At some point on April 6, she was transported to Mercy in Joplin. She remained on a ventilator until April 10.

Even though James Andrews couldn’t be with her, she said God placed people from her life in both hospitals.

A good friend, John Bearden, serves as the director of pharmacy at the Grove hospital. He just happened to be in the emergency room when she arrived. Two of her nurses at Mercy, Julie Bass and Terri Cox, were friends and former co-workers.

“These weren’t just medical personnel I had worked with, but Bible-believing Christians,” she said. “Believers who immediately started praying. Julie was there when I woke up.”

On Saturday, April 11, one of her nurses brought her in a mobile phone encased in a Ziplock bag, enabling her to talk to her children. The next day she was allowed to use her own phone to FaceTime with her family.

“All the rules, the protocols are different,” she said. “With all the unknowns with this whole thing, even the simple things we take for granted are so difficult.”

On Monday, just before her discharge, she made a Facebook video, thanking everyone for their prayers and updating them on her condition. It has had thousands of views in this past week.

She said seeing her husband for the first time after the ordeal was wonderful.

“We just stood in the parking lot hugging for several minutes, before I got in the car,” she recalled.

“She looked magical, wonderful,” he said. “I was very happy and thrilled.”

In a joking way, he said he has had to babysit with his wife since she was discharged. His son wanted to go fishing. I told him: “I can’t leave your mom by herself. She can’t be trusted.”