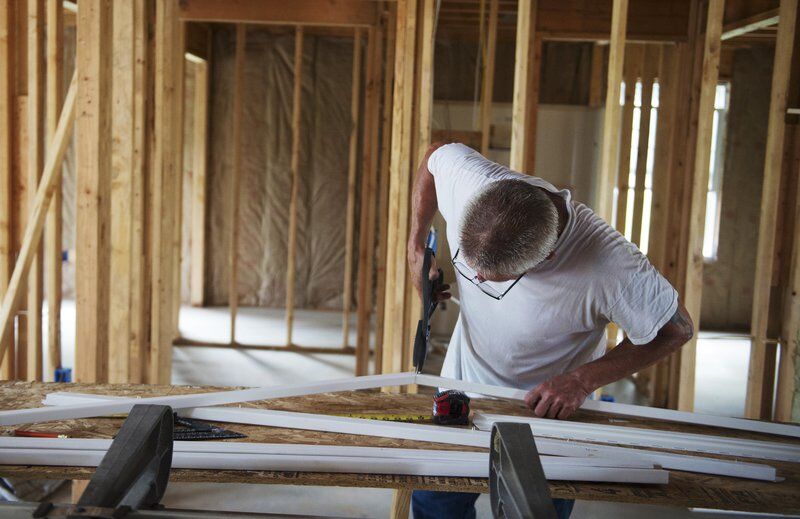 James Busby works on a house on Atkinson Street in Pittsburg on Wednesday, which is being built on a land bank site. Globe | Roger Nomer 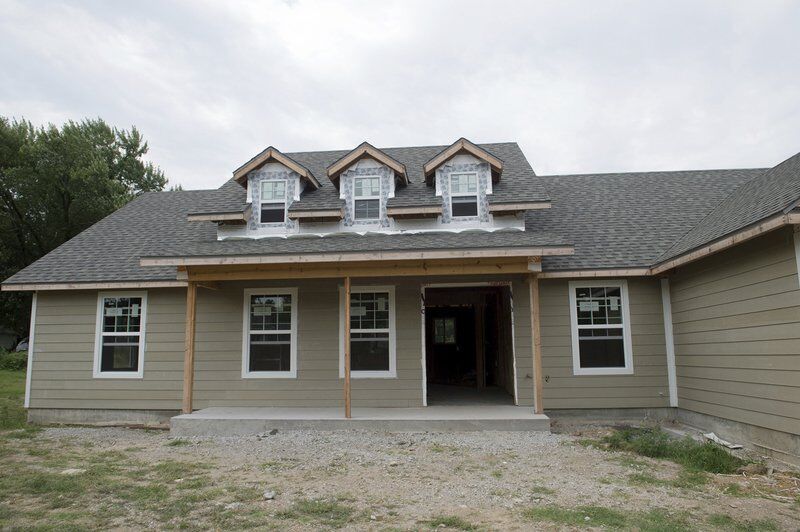 This house on Atkinson Street in Pittsburg is being built on a land bank site. Globe | Roger Nomer 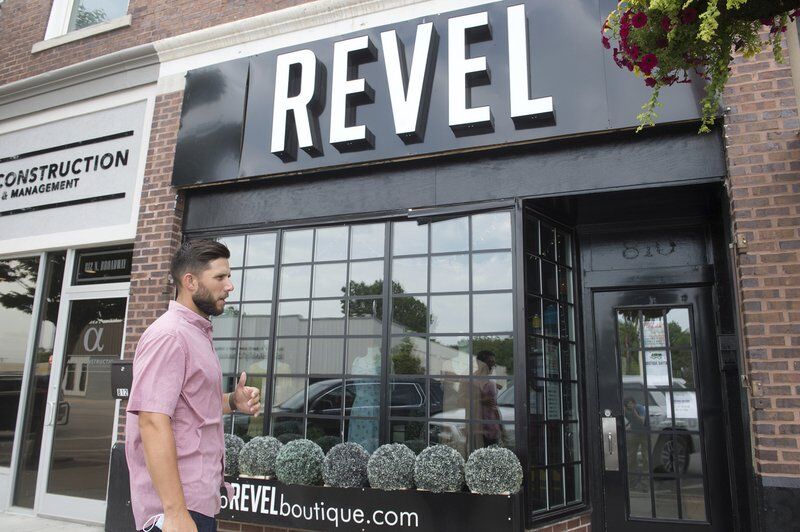 Quentin Holmes, director of housing and community development with the City of Pittsburg, talks about Revel Boutique that was build on a land bank site in Pittsburg on Wednesday. Globe | Roger Nomer 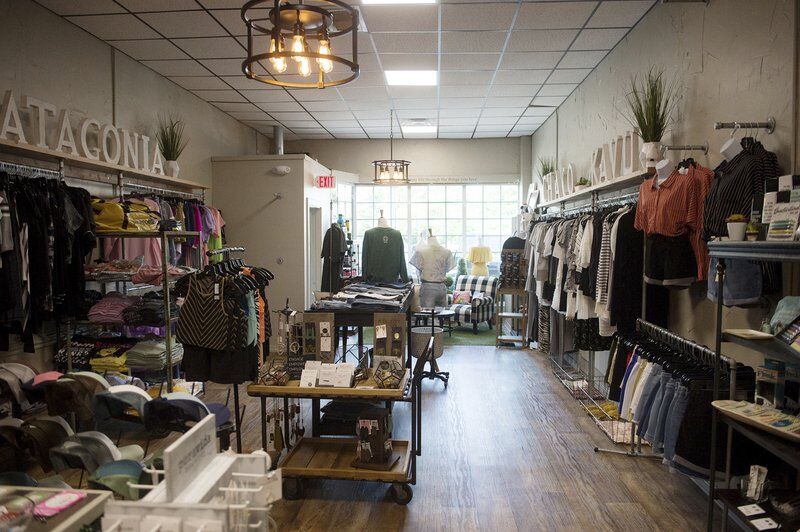 James Busby works on a house on Atkinson Street in Pittsburg on Wednesday, which is being built on a land bank site. Globe | Roger Nomer

This house on Atkinson Street in Pittsburg is being built on a land bank site. Globe | Roger Nomer

Quentin Holmes, director of housing and community development with the City of Pittsburg, talks about Revel Boutique that was build on a land bank site in Pittsburg on Wednesday. Globe | Roger Nomer

COLUMBUS, Kan. — Officials in Columbus are moving forward with plans to launch the city’s first land bank to repurpose abandoned, vacant and tax-delinquent properties for future development and growth.

Land banks are entities created by local jurisdictions to manage and focus on transforming an inventory of vacant, abandoned and foreclosed properties into productive use. This allows problem properties that destabilize neighborhoods, create fire and safety hazards, and drive down property values to be transferred to new, responsible owners.

These programs have existed in the United States for more than four decades, but it still continues to be an underutilized developmental tool even today. The Center for Community Progress — a national nonprofit that helps communities address vacant, abandoned and deteriorated properties — estimates there were approximately 170 land banks and land banking programs in operation in the United States as of January 2018.

Daniela Rivas, Columbus city administrator, serves on the land bank staff. She said last week that the city has toyed with the idea for several years, but it was never fully pursued until she came on board in 2018. Rivas had prior experience with land banks, helping to implement one in Park City while she was the director of finance.

The Columbus Land Bank will be the centralized point of contact for individuals and developers interested in acquiring vacant and abandoned land for development, according to an ordinance passed by the city late last year. The overall goal is to improve the quality of life in Columbus by revitalizing abandoned land and property.

“You place these properties back on the tax rolls, so you take in and spit it back out, better and improved,” said Rivas. “The purpose of our land bank is the removal of blight and improving our city, especially how it looks. We’re losing our population, and we need to do something. We’re hoping this land bank will provide adequate access to our residents, so they stick around.”

After examining the budget, Rivas said the city sees a trend that shows the population is slowly decreasing.

“But it’s steady, and it has been for the past 10 years,” she said. “Our fees for service collections have been declining as well, everything to the tune of about 3%. That means our tax dollars are declining. We don’t have as many people buying houses in Columbus. With all that, the city is working on a strategic plan. A big part of that plan is: How do we get people to stay in our city?”

City officials are currently working on a housing analysis to identify future needs over the next few years. Rivas said a former survey conducted by a third party found that nearly 20% of Columbus homes were found to be inadequate.

“They were deemed unrentable, for whatever reason,” she said. “We’ve put housing on the forefront of what we can do over the next five years to improve that.”

A five-member Board of Trustees will govern the land bank and can ask the city attorney for legal consultation. Members appointed to the board are Matt Roff, Jennifer Thompson, Becky Purdue, Bryce Buergin and Wes Houser.

Rivas said they’re still in the early stages of the land bank process and will be having an informational meeting with their board members. The city is currently looking to hire someone to take on community development and serve as the liaison between the city and the land bank board.

The city of Pittsburg in nearby Crawford County established its land bank program in 2015. Rivas said Columbus reached out to its neighbor and received a presentation from Quentin Holmes, Pittsburg’s director of community development and housing, who discussed land banks with the council.

“It’s definitely a benefit for your community,” said Holmes. “It does not go without work. It does take a lot of work to maintain and upkeep a land bank successfully. We’ve actually done really well with our land bank that the Kansas Housing Resources Corp. even recognized it as a success.”

Holmes said land banks are tools that can be used to enhance neighborhoods and improve housing stock. The Pittsburg land bank acquires property through purchase, owner donation or tax foreclosure. The program is divided into three types of parcels: parcels with a structure, buildable parcels and nonbuildable parcels.

“It’s an opportunity for the city to be able to take ownership of property and then give the previous owner basically a donation credit,” said Holmes. “They can use the property value as a credit for a donation. It will wipe away the assessments on the property, so they no longer owe those assessments. It circumvents the tax sale process because no one’s going to come in if someone owes $30,000 in back taxes on a building.”

Revel Boutique, a business at 810 N. Broadway in Pittsburg, was formerly a land bank building that had been vacant for 10 years. Building renovations were completed last year.

“They did an incredible job with this building and saved it,” Holmes said. “There were serious roof and flooring issues, but they fixed it. In the Downtown Revitalization Program, any commercial property that spends over $10,000 in renovation, they get a property tax freeze for five years. For example, when the property was purchased, the property taxes were ‘X,’ and when it was renovated, the property taxes stayed at ‘X,’ regardless of what the new property value is. It’s a great incentive.”

Since 2015, the Pittsburg land bank has created more awareness, which has given the city several opportunities to grow. Holmes said it currently has more than 20 projects that are either completed or set to be completed within the next three years.

“We’ve been able to demolish over 200 structures over the last several years,” said Sarah Runyon, public information manager for the city of Pittsburg. “This includes houses, dilapidated garages and secondary structures. It’s made a huge difference for our community because those properties are no longer unsafe, causing a blight to neighborhoods. We’re able to turn those into productive properties where people are using them, neighborhoods are being revitalized, and we get it back on the tax roll."