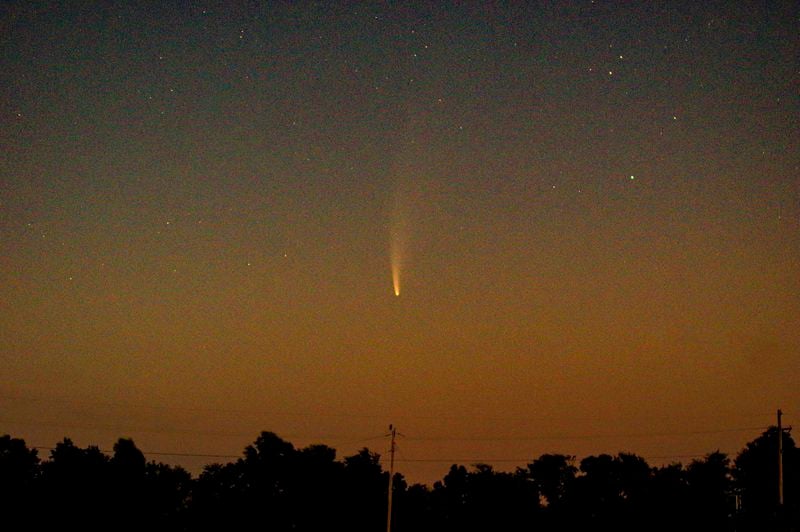 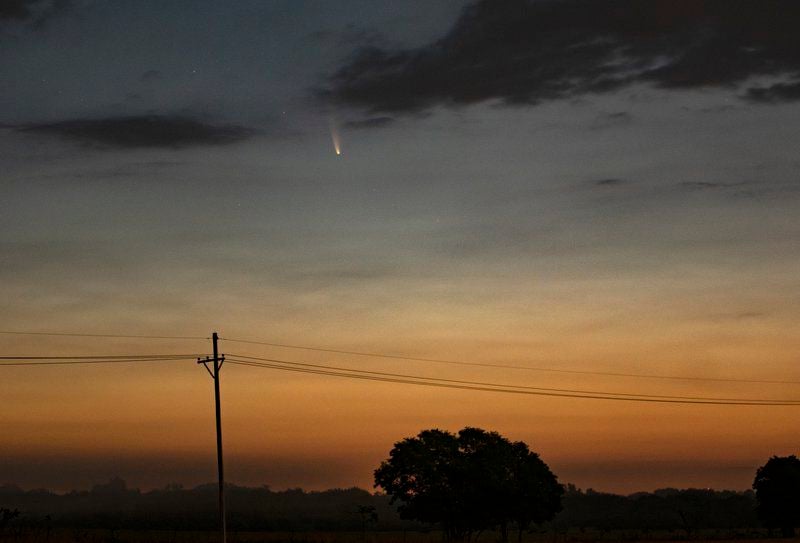 For the past several mornings, some intrepid observers and photographers have been getting up before sunrise to find and photograph a comet that has become one of the largest items in the sky.

For now, Comet NEOWISE is difficult to see because it is hidden in a haze of dim light as it comes up just ahead of the sun in the northeastern sky.

But according to the website spaceweather.com, starting on Sunday evening, NEOWISE will become an evening object, appearing low on the northwestern horizon below the Big Dipper constellation.

Robert Vice, 43, an astrophotographer from Duenweg, hasn't seen NEOWISE yet, but he's looking forward to getting his telescopes and cameras out to an area with dark skies to image it.

“It’s pretty amazing because comets are not one of those normal things like, oh, the moon’s rising, that happens every month,” Vice said. “Comets are once-in-a-lifetime things. The next time this one comes back around to Earth will be in about 6,000 years.”

Joseph Masiero, deputy principal investigator for the NEOWISE project at NASA’s Jet Propulsion Lab in California, said observations show that NEOWISE has a larger than average core that’s about 3.1 miles in diameter.

“Most of the comets we discover with our telescopes are about 1 to 3 kilometers in diameter,” Masiero told the Globe. “This one is larger than average. It’s not a behemoth like Halley’s comet, that one is a factor of 10 larger.

Masiero said the core of NEOWISE is similar in size to Comet McNaught, a comet that came through the solar system in 2007 and sprouted a huge tail as it went around the sun and became one of the greatest comets in recent memory for people who could see it. However, the only people who could see it were people living in the Southern Hemisphere.

Comet NEOWISE is bright now, but Masiero said he anticipates that it will dim as it moves away from the sun, unless something dramatic happens to cause the comet to suddenly brighten.

“The way the geometry is working, it’s getting a little bit closer to us every day but significantly farther from the sun every day,” Masiero said. “I anticipate it will gradually decrease in brightness over the next couple of weeks, but who knows.”

How to see it

Vice recommends people find a place away from city lights and with a clear view of the horizon to the northwest to try to find Comet NEOWISE this week.

People might want to have binoculars handy because early this week, the comet might still be hard to see in the twilight because it will be close to the horizon, but it will rise higher in the northwest sky every night through the end of July.

People will see a bright coma, or head, at the bottom of the comet and a tail running up toward the Big Dipper.

How long it will remain bright and visible is anyone’s guess, Vice and Maserio said.

Vice said he and other astrophotographers had been monitoring two other comets that were due to become bright objects in July, but both of those disintegrated as they approached the sun.

“Sometimes comets do that; they vaporize when they go around the sun or they hit the sun or they never come close enough to be naked eye and you have to have a telescope to see it,” Vice said. “Most often, especially with comets, someone announces, hey, we’ve discovered a comet, we’re going to get to see it, but it’s two years out. You’re like, 'Oh, OK, let’s see what happens.' And you have the next 24 months to wait and hope, then something happens and they go away. But then you have comets like this one. It was discovered on March 27, 2020, and all of a sudden they just blow up and you’re like, 'Wow, this is awesome.'”

The comet gets its name from an orbiting satellite called Near Earth Objects Wide-Field Infrared Survey Explorer, according to Joseph Masiero, deputy principal investigator for the NEOWISE project at NASA’s Jet Propulsion Lab in California. The satellite is a space telescope that was launched in 2009 and was active until 2011 performing wide field surveys of deep space. Its mission was limited by the amount of coolant it had for its infrared instruments, and when it ran out of coolant, it was decommissioned.

Masiero said a team of NASA scientists found that two of the instruments on the satellite could still be used to search the sky for objects close to Earth that could potentially pose a threat to the planet. The cameras on the space telescope spotted Comet NEOWISE on March 27.