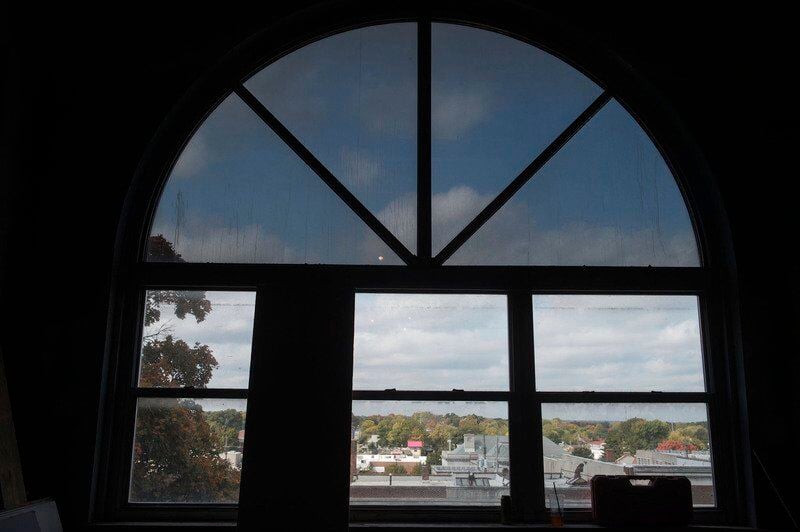 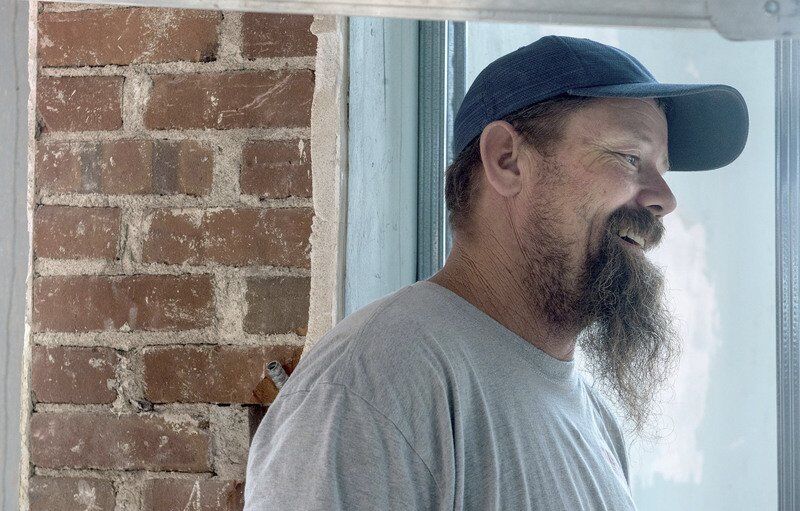 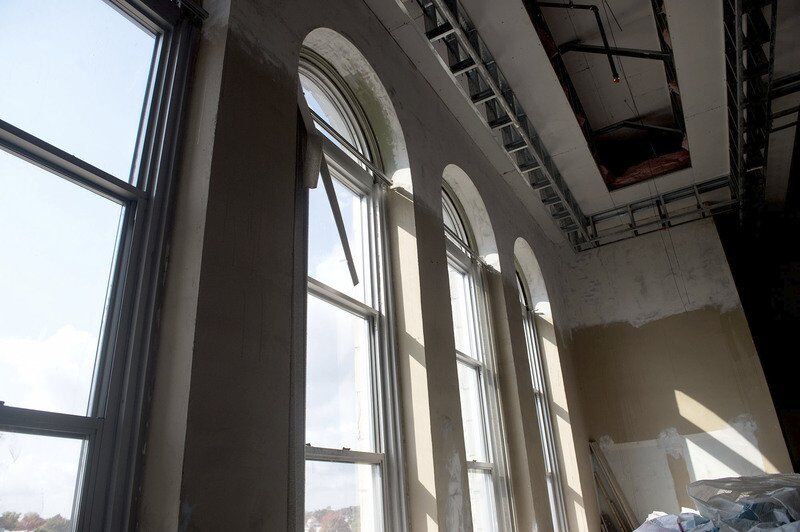 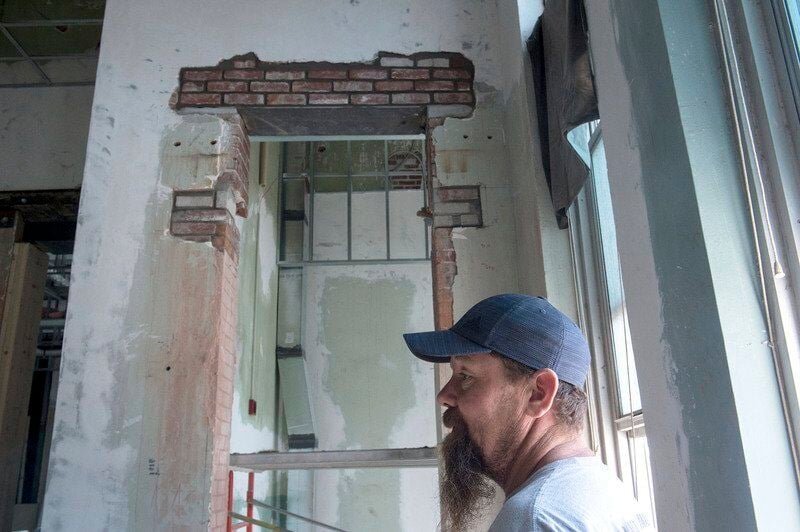 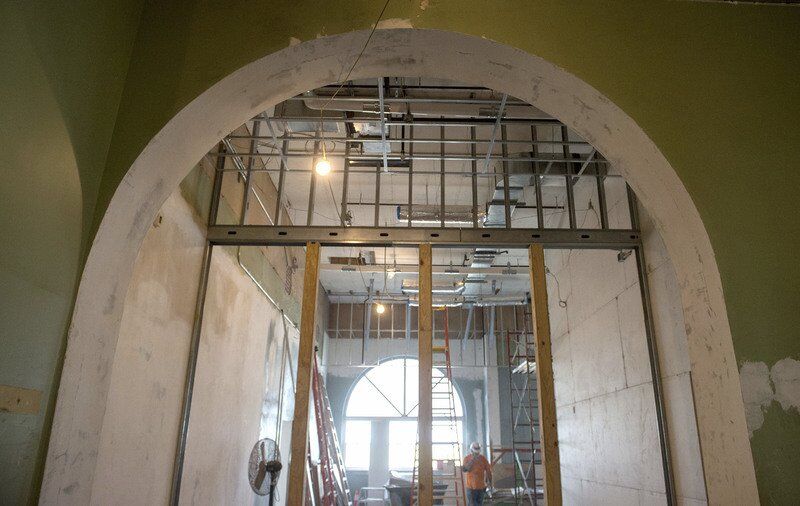 Arches at the top of doorways on the third floor of the Jasper County Courthouse in Carthage have been uncovered during recent construction. Globe | Roger Nomer

CARTHAGE, Mo. — Crews renovating the second and third floors of the Jasper County Courthouse have uncovered some of the building’s original features, and the public will get to enjoy some of them once the renovation is finished next spring.

“You have to marvel at what they accomplished when they built this building back in 1894,” Western District Commissioner Darieus Adams said. “The vision that they used and the craftsmanship — certainly it’s nice to expose that. That’s the beauty of this reconstruction — the 'wow' factor when you go up there and look because we are going to reveal what existed previously and it is impressive to look at.”

For years, only two of the original central arches that support the weight of the courthouse clock tower have been visible on the third floor where the main courtrooms are located.

Jimmy Lynch, a journeyman carpenter for Crossland Construction who has been working with the crew on the renovation, said the main hall ran north and south in the building, and those arches were mostly uncovered. The arches on the east and west sides were filled in with brick and wood walls to make smaller doors for better security and convenience.

“They were all covered up and bricked in as a means of compartmentalizing the building so they could just use a small door and close it off for privacy,” Lynch said. He added: “It’s still in this pristine condition after all these years.”

Similar but shorter arches exist on the second and first floors. Together, these arches hold up the central clock tower.

Lynch said work crews are impressed with the quality of the original construction.

“It’s like peeling back the layers of history,” Lynch said. “This place has been remodeled so many times, and you just see how people did things throughout the years and the advances in technology."

With the courtrooms on the third floor stripped and all the woodwork and drop ceilings removed, it’s now possible to see the rows of windows as they were originally built. From the inside, the false ceilings covered the arched glass that topped each of the tall windows in the two main courtrooms.

“With the soffit and ceiling system they’ll be using, it will actually reveal all the architecture from the arches above the window,” Lynch said. “It looks totally different from what it did before now, and it’ll look totally different when we’re done.”

Another element that has been hidden from view is the quality of the brick construction, such as one spot where workers were creating an opening for a door to a courtroom.

“When they opened these brick walls up, it was kind of neat to see that they layered three layers of brick on there," Lynch said. "Instead of leaving a cavity between the two brick walls there, they put another layer of brick.”

Lynch said workers are reusing the old bricks in places where they need them instead of ordering new ones.

While the courthouse seems to be built of limestone blocks from the outside, cutting into the walls reveals that it is primarily a brick structure with a limestone facade.

“But that stone facade is no joke; it’s good and deep, a good part of the structure,” Lynch said. “It’s common practice to do a stone facade over the brick. But the limestone is good and thick. I’d hate to have been the guy laying that.”

Eastern District Commissioner Tom Flanigan said the courthouse has been his family’s workplace since it was built in 1894, and he’s glad he’s been able to play a role in its reconstruction. As one of three county commissioners, he has been a part of the planning for the courthouse renovations and voted on the contracts to pay for the project.

“My family started practicing law in Carthage in 1881,” Flanigan said. “My great-grandfather, John H. 'Fire Alarm' Flanigan, practiced law in the buildings that housed the Jasper County court before this building was built and continued after it was finished.”

Flanigan’s grandfather, John H. Flanigan, was born in 1889 and went on to become a judge in the Jasper County Courthouse, as would his son and Tom Flanigan’s uncle, George Flanigan.

Tom Flanigan’s father, Lawrence “Hop” Flanigan, was also a longtime attorney in Jasper County with his father and brother.

Flanigan and Adams said the renovation plans call for many of the historic architectural features to remain visible when the project is done in May 2021.

“That’s the advantage of having the preservationists take a look-see and looking at their suggestions,” Flanigan said. “I think it’s an awesome thing; it’s a continuation of Carthage’s legacy of leadership. We really are preserving the jewel of Carthage.”

The Jasper County Courthouse is undergoing what is likely the most extensive renovation in the building’s 126-year history. Once the latest project is done, the county will have spent $7.3 million on renovations to the building.

The first $3 million, approved by voters in 2016, paid to install a geothermal heating and air conditioning system throughout the building and to power-wash the entire exterior.

The second project, approved when residents voted in 2019 to extend the 2016 sales tax, is estimated at $4.3 million and will gut and rebuild the second and third floors. Offices will be reconfigured, a third courtroom will be added, and the existing courtrooms will be renovated. Floors will also be restored across the building.