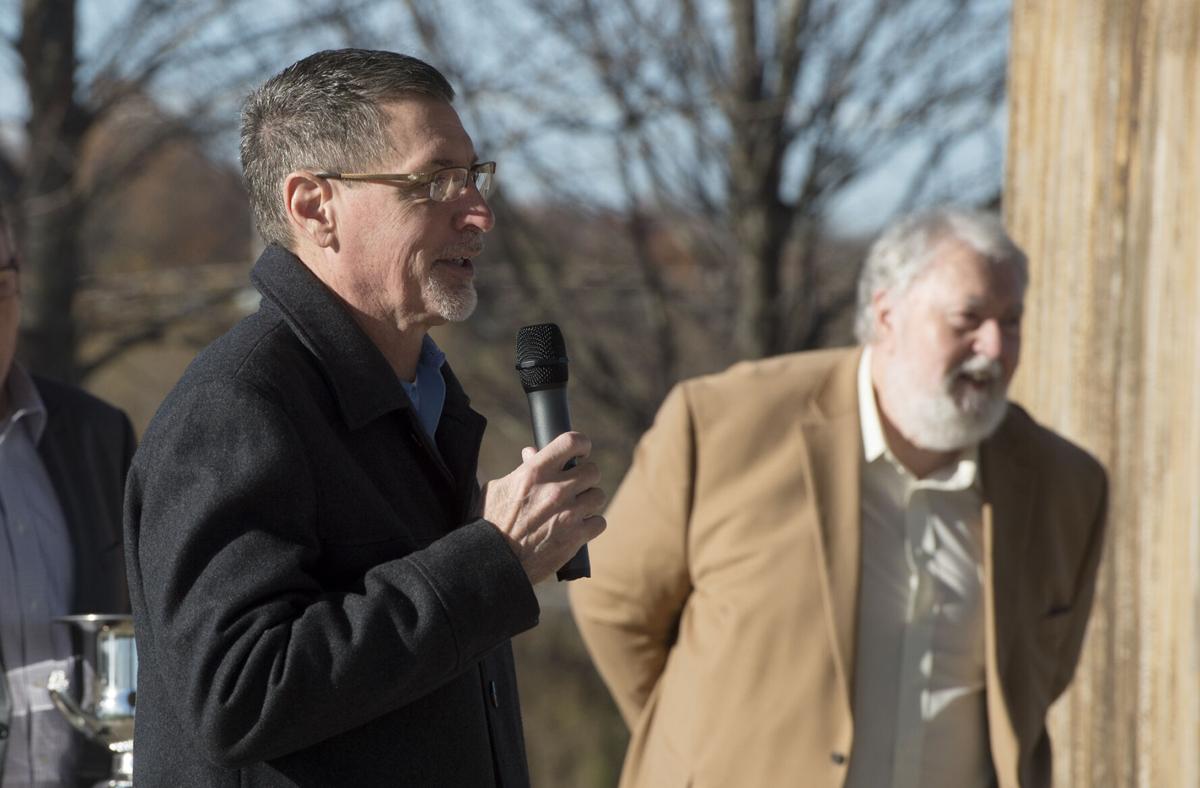 Dan Pekarek speaks after being lauded by City Councilman Gary Shaw (right) Monday after Pekarek was honored by the Joplin Area Chamber of Commerce as Citizen of the Year. GLOBE | ROGER NOMER 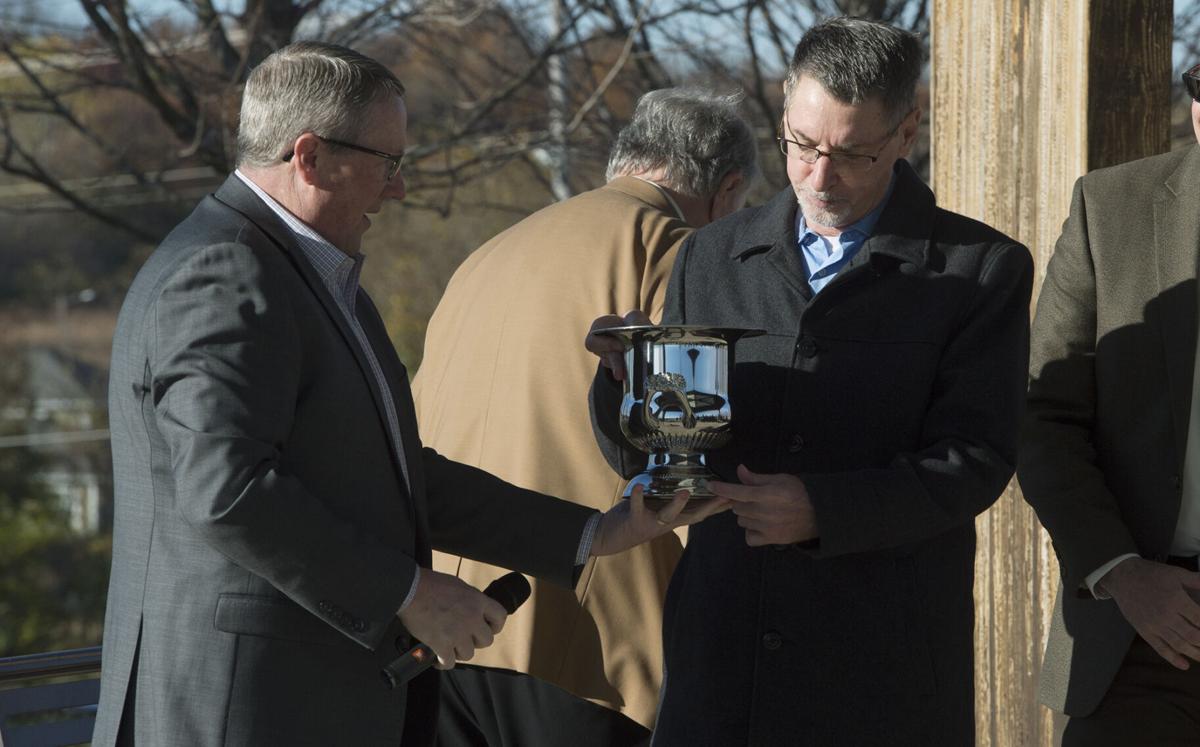 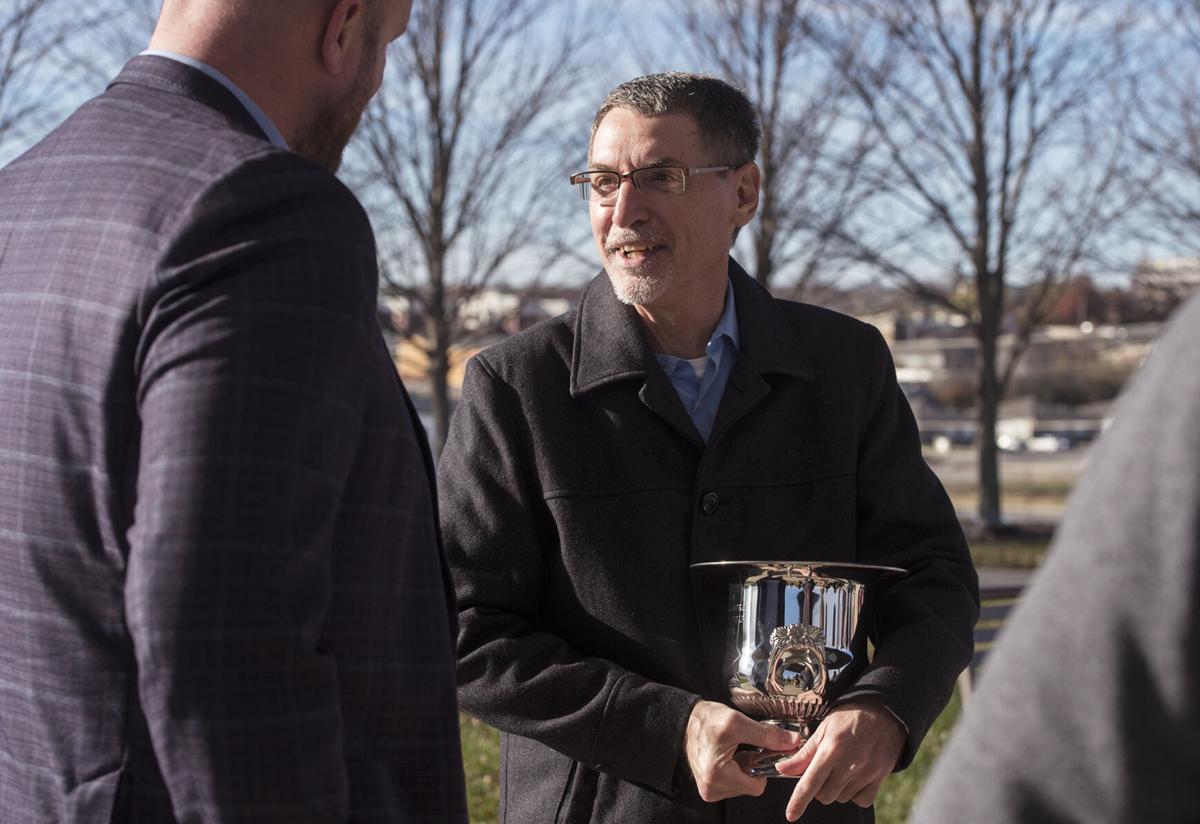 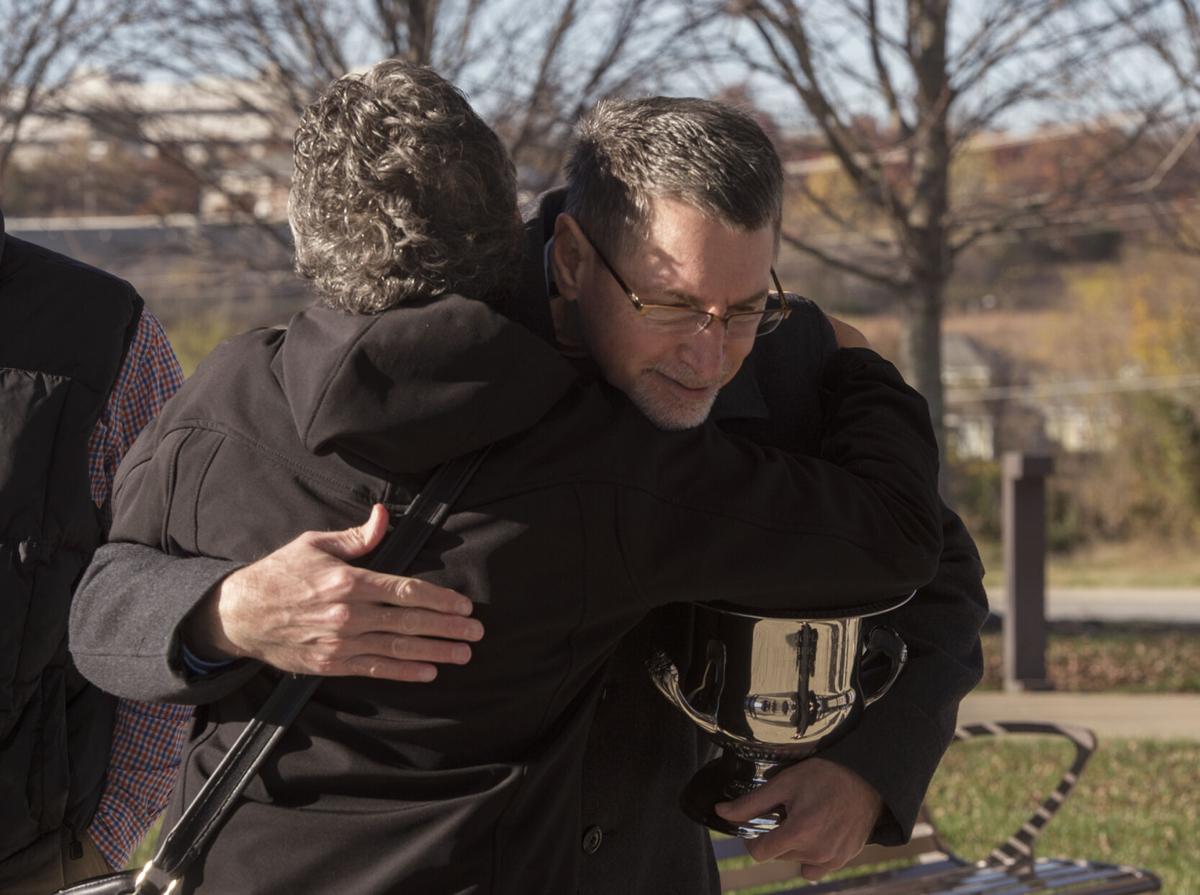 Dan Pekarek gets a hug Monday from Sherri McCulloch, financial analyst with the city of Joplin, after receiving the 2021 Outstanding Citizen of the Year Award at Mercy Park. He retired from working for the city in October. Globe | Roger Nomer

Dan Pekarek speaks after being lauded by City Councilman Gary Shaw (right) Monday after Pekarek was honored by the Joplin Area Chamber of Commerce as Citizen of the Year. GLOBE | ROGER NOMER

Dan Pekarek gets a hug Monday from Sherri McCulloch, financial analyst with the city of Joplin, after receiving the 2021 Outstanding Citizen of the Year Award at Mercy Park. He retired from working for the city in October. Globe | Roger Nomer

Joplin's recently retired assistant city manager, Dan Pekarek, has been tabbed by the Joplin Area Chamber of Commerce for the Citizen of the Year Award.

Pekarek had a 35-year career with the city of Joplin before he retired Oct. 3, working 24 years in the health department in addition to several years as interim city manager and then as assistant city manager.

The award was presented Monday morning by chamber member Craig Tankersley, president and CEO of Southwest Missouri Bank, during a ceremony at Mercy Park. SMB sponsored the award for the chamber.

City Council member Gary Shaw, who was the 2020 recipient of the award, spoke during the ceremony of Pekarek's role as a community leader.

"Dan was nothing short of amazing," Shaw said. "The respect the employees had for him and his unique leadership abilities turned our staff in a very positive direction and made it easier for the incoming city manager to assume those duties."

The current mayor, Ryan Stanley, noted "how fitting that it would be Dan. At his crescendo as a city manager and fighting COVID-19, nobody deserves it better than he does."

Pekarek served as interim city manager in 2019 and 2020 until the council hired the current city manager, Nick Edwards. Pekarek then moved back into the post he had previously held as director of the Joplin Health Department as the COVID-19 pandemic started. He started educating people before the pandemic was declared about what was known at the time regarding how the virus is spread and precautions. He also led the effort to formulate the city's Response and Recovery Plan to address what safeguards could be used to protect the public and reduce the spread. He was then named assistant city manager.

Earlier in his career as health director, Pekarek prepared a program for fluoridation of Joplin water, proposed ordinances adopted by the council to strengthen the city's animal control efforts and chaired a homeless coalition to address needs of those without homes. He also worked for the adoption of a local prescription drug monitoring ordinance and a Tobacco 21 ordinance.

He led city response to public health emergencies — including hepatitis A, SARS and avian flu — and established tetanus shot clinics. He oversaw the rescue and relocation of displaced pets after the 2011 tornado and worked with the Environmental Protection Agency on a project to replace soil contaminated by heavy metals that were found in west Joplin after the disastrous storm.

He was recognized earlier this year by the Missouri Public Health Association with the highest honor given by the organization, the W. Scott Johnson Award, for his distinguished service in the field of public health in Missouri.

"I certainly wasn't anticipating this, and I don't believe I deserve this," Pekarek said after the ceremony. "I was a very little part in all the things that were done over my career, and it is all about the folks that I worked with and those in the community who served on the same committees I did.

"This community has a strong history of working together on issues that need to be solved, and I was just a small part of that. This really is for all those folks that also worked on those."

The chamber bestows the honor on people who believe in public service and have an impact on the community, Drinkwitz said.

"Sometimes that impact is in moments, and sometimes, in Dan's case, for 35 years he's made a positive impact on thousands of people's lives, and they may not have even known it," Drinkwitz said.

The award has been given for 55 years, and the recipient is selected by a committee of those who have served as president of the chamber board and some award recipients.