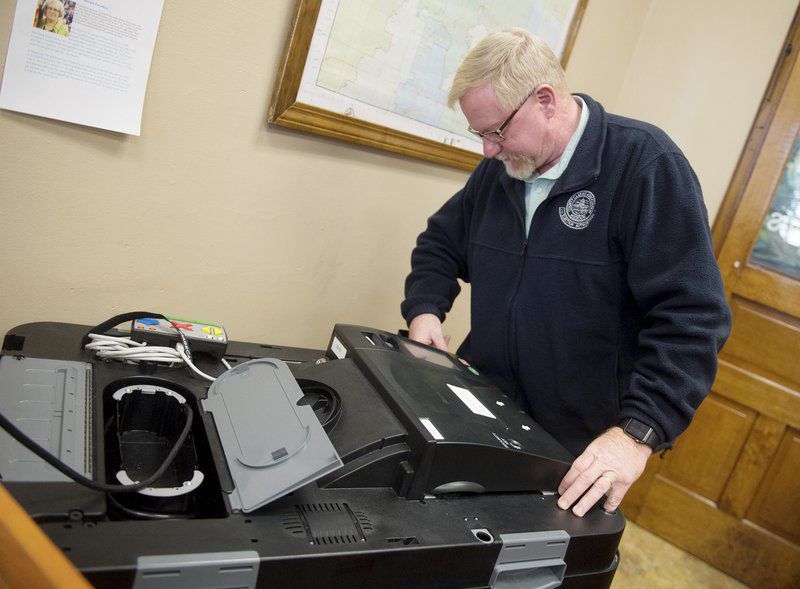 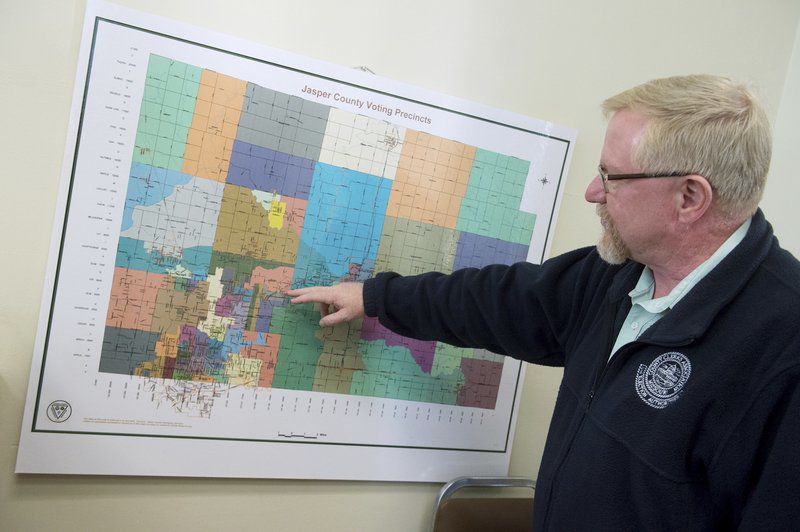 Charlie Davis, Jasper County clerk, talks about voting precincts on Monday at the Jasper County Courthouse in Carthage. The deadline for those not registered to vote to do so in time for the March 10 presidential preference primary in Missouri is Wednesday, Feb. 12. In Oklahoma, the registration deadline in time for its March 3 presidential primary is Friday, Feb. 7. GLOBE | ROGER NOMER

Charlie Davis, Jasper County clerk, talks about voting precincts on Monday at the Jasper County Courthouse in Carthage. The deadline for those not registered to vote to do so in time for the March 10 presidential preference primary in Missouri is Wednesday, Feb. 12. In Oklahoma, the registration deadline in time for its March 3 presidential primary is Friday, Feb. 7. GLOBE | ROGER NOMER

Ready for it or not, 2020 promises election excitement both nationally and locally, and residents who want to get in on that action have only a few weeks to register for that first round, if they haven't done so already.

Iowa goes first, of course, on Feb. 3, followed by New Hampshire, then Nevada and South Carolina.

Oklahoma voters join in on March 3, when along with Arkansas, 12 other states, American Samoa and Democrats abroad it participates in what is known as Super Tuesday.

Paige Bearden, election clerk in Ottawa County, Oklahoma, said the deadline to register for Super Tuesday is Friday, Feb. 7. People can register at the courthouse annex at 123 E. Central, Suite 104, in Miami, or they can register at any vehicle tag agency.

They also can go to www.ok.gov/elections and print off and fill out a registration form that can then be mailed in or dropped off at the courthouse. If mailed, it needs a Feb. 7 postmark.

Next up is Missouri's presidential preference primary, on Tuesday, March 10.

Jasper County Clerk Charlie Davis said the deadline to register for that is Wednesday, Feb. 12.

Both Missouri and Oklahoma have their local elections — municipal and school board — on Tuesday, April 7. The deadline to register for that election in Missouri is Wednesday, March 11, and in Oklahoma it is Friday, March 13.

The final certification deadline to put an issue on the ballot in Missouri for the April 7 election will be Jan. 28, but already the Joplin Board of Education has announced a plan to ask for up to a $25 million bond issue to build a new elementary school on Dover Hill to replace Columbia and West Central elementary schools, and also for a classroom expansion at Kelsey Norman.

Davis, and Tami Owens, Newton County clerk, say they have finished canvassing the voter rolls, reviewing tens of thousands of voters and their addresses. The number reviewed was more than 110,000 between the two counties.

"It's checking and double-checking," Owens said. "Is the information correct? It's quite a process."

"Every registered voter gets a piece of paper, either a voter ID card or an address verification form," Davis said, and they all should have received them by now.

Voters who have not received either should contact their county clerk's office.

New voters in Missouri also can register online at the Missouri secretary of state's website, https://www.sos.mo.gov/elections/goVoteMissouri/register, or they can print out a registration form from the same website and take it to their nearest courthouse.

"The best way to do it is to come to the courthouse," Owens said. "It's a quicker process."

Davis also recommends that anyone who has moved or is registering for the first time come to the courthouse in Carthage or the courts building in Joplin.

The Kansas Democratic Party will hold a closed, party-run primary on May 2.

Lynn Grant, who chairs the Crawford County Democratic Party, said the party will send out a letter to all registered Democrats in March that will provide an application for advance ballots as well as details about the May 2 election, including location and times, but they also are encouraging people to register.

"This is the first time we have done a presidential primary in several years," Grant said.

The Kansas Republican Party announced last year that it would not hold a 2020 presidential caucus.

There is no local election in Kansas this year; those were conducted in November 2019.