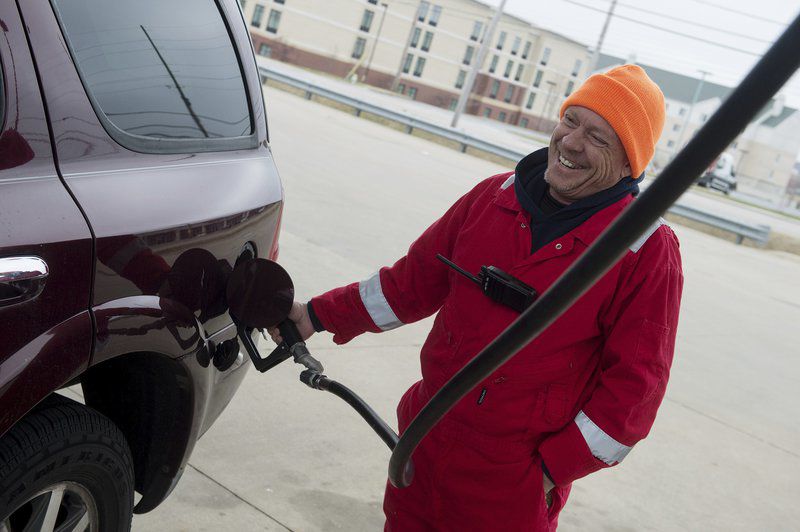 Paul Schaefer, owner of Doc's Stop, smiles as he fills up a customer's vehicle on Monday as part of the store's service. Schaefer, a physician in his regular day job, said he thought pumping gas and cleaning windshields would be a good way to get to know his business's customers and that they would appreciate the service. GLOBE | ROGER NOMER 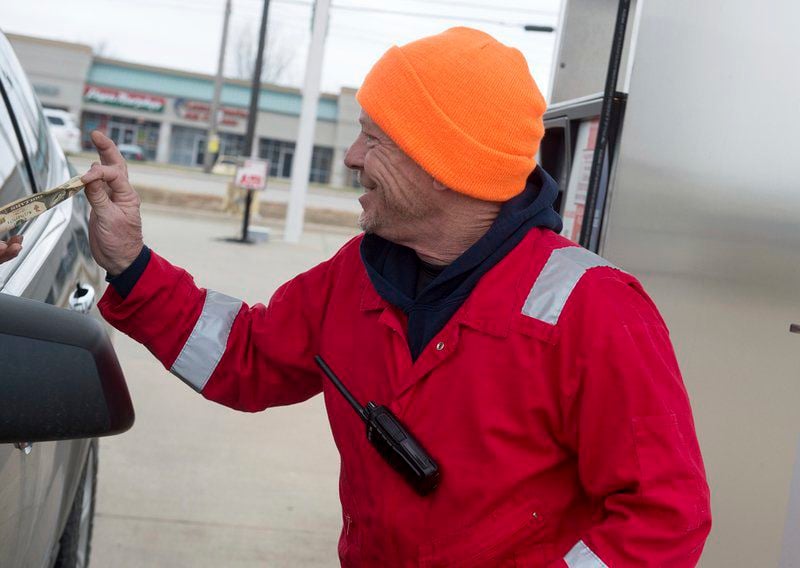 Paul Schaefer, owner of Doc's Stop on 32nd Street, accepts payment for a fill-up on Monday as part of the station's service. GLOBE | ROGER NOMER

Paul Schaefer, owner of Doc's Stop, smiles as he fills up a customer's vehicle on Monday as part of the store's service. Schaefer, a physician in his regular day job, said he thought pumping gas and cleaning windshields would be a good way to get to know his business's customers and that they would appreciate the service. GLOBE | ROGER NOMER

Paul Schaefer, owner of Doc's Stop on 32nd Street, accepts payment for a fill-up on Monday as part of the station's service. GLOBE | ROGER NOMER

Living in such a fast-paced society driven by computers and automation, it can be easy to forget the good old days when a gas station attendant would pump your gas and clean your windshield.

Patrons at Doc’s Stop on 32nd Street in Joplin may feel like they’re being transported back in time when owner Paul Schaefer approaches their car window offering to pump their gas or squeegee a dirty windshield.

The ubiquity of full-service stations began to diminish after the 1973 oil crisis. As gasoline became more expensive, many filling stations switched to the self-serve model as a way to bring down the cost of gasoline for customers. Once the oil crisis ended, customers had gotten used to the idea of pumping their own gas, and most gas stations in the U.S. stuck with the self-serve concept.

In 1947, a gas station owner in Los Angeles named Frank Ulrich opened the first self-service filling station, according to the Petroleum Service Co.

Schaefer said he’s been an absentee gas station owner for the last six years and thought this would be a good way to get to know his customers. He uses a walkie-talkie to communicate back and forth with the cashier to help operate the gas pumps.

'I've been enjoying it'

It may not be the whole shebang with an oil check, but it’s better customer service than what most retailers offer nowadays.

“I don’t do the oil, but I can check tires,” he said. “For the most part, it’s going to be windshields and gas pumping. I’d love to go back to the way they did it in the '50s where three guys run out and swarm the car. I’ve been enjoying it.”

He works as an emergency room doctor at the Ozarks Medical Center in West Plains and performs full-service work during his time away from the hospital. Schaefer said he puts the “Doc” in “Doc’s Stop.”

“A few months ago, I decided to spend less time in the ER and more time here,” Schaefer said. “I did the full service a couple times during the bad weather last month.”

A long white banner now covers the storefront of Doc’s Stop that says, “Full Service. Same Price. Thank you, but no tips please." Schaefer said there were a few times he would run outside in the rain and hold up an umbrella for customers. He thought, why not take it a step further?

“I’m not tall enough to hold up an umbrella over someone’s head, and we had talked about something like this off and on for years,” Schaefer said. “I figured, I still work a day a week at the ER in West Plains, so we figured Monday, Wednesday, Friday from 11 a.m. to 2 p.m. to get started.”

The service officially began being offered at the 32nd Street store Feb. 3, and Schaefer said he’s received a lot of mixed reactions from customers.

“Some folks are actually put off by it,” he said. “That’s why I wear this bright red outfit, but that wasn’t enough. Now, we have a sign up. I still get some funny looks sometimes. Once people get over the shock of me approaching their car, most people really like it. We’ll do this indefinitely and keep it going.”

Angela Cates, general manager of Doc’s Stop, said Schaefer was motivated to offer the full service after hearing several requests for assistance at the gas pump from their elderly or disabled clientele.

"Back in the day, these little ladies didn't pump their gas — their husbands did it for them," she said. "And so they'll come, and we like to interact with them. It's fun. They're real sweet and will ask if we'll go pump their gas. Some of them don't know how to put a credit card in the machine. Technology gets a little crazy when they're not accustomed to that. Since he's hands-on now, he gets to see the customers because that's the fun part of the job."

It was a cold, snowy afternoon in Joplin on Friday and 75-year-old Sharon LaRue, of Joplin, was happy she didn’t have to leave the comforts of her warm vehicle to pump her own gas. Schaefer was at her driver’s side window by the time she parked and was pleasantly surprised to hear about the full-service option.

"I was really surprised when he came over here," she said. "I didn't know about it until I pulled up, but I think it's great. I can remember when this was offered and gas was a quarter."

On Monday, Kayla Sehnert and passenger Paula Adams, both of Joplin, pulled up to the station and were promptly taken care of by Schaefer. Sehnert said they stop for gas there quite often and noticed the sign the other day. It definitely struck their curiosity, and they plan to tell their friends about it.

"I think it's really cool, and it's nice to have a personal touch," Sehnert said.

Bryan Vowels, 49, of Joplin, pulled up to the pump Monday afternoon, and said his grandfather, Clifford, ran a gas station in Seneca that offered full service.

"When I was growing up back in the '70s, he did the full service for years," he said. "It's a pretty cool idea. I think my grandfather would love to see this."

New Jersey is the only state that places restrictions on self-service gasoline. A state law passed in 1949 bans all customers from pumping gas at any time.

Oregon used to ban self-service gasoline, but under a law that took effect in 2018, counties with populations of less than 40,000 may offer self-service gas to customers at any time. The original ban on self-service gasoline was passed in 1951. The state law made it illegal for gas station customers to pump their own gas and mandated $500 fines for stations that violated the law by letting customers pump gas. The law's language includes the justification that pumping gas can expose customers, including pregnant women and children, to unsafe fumes, according to The Associated Press.

Michael James Crumbliss opened his eyes to a new home on Tuesday, where he was to be greeted by his mother, Peggy Cross Crumbliss, father, James Junior Crumbliss, brother, Patrick Wayne Crumbliss, and other loved ones inside the gates of Heaven. Born on June 9, 1947, he passed into the next …