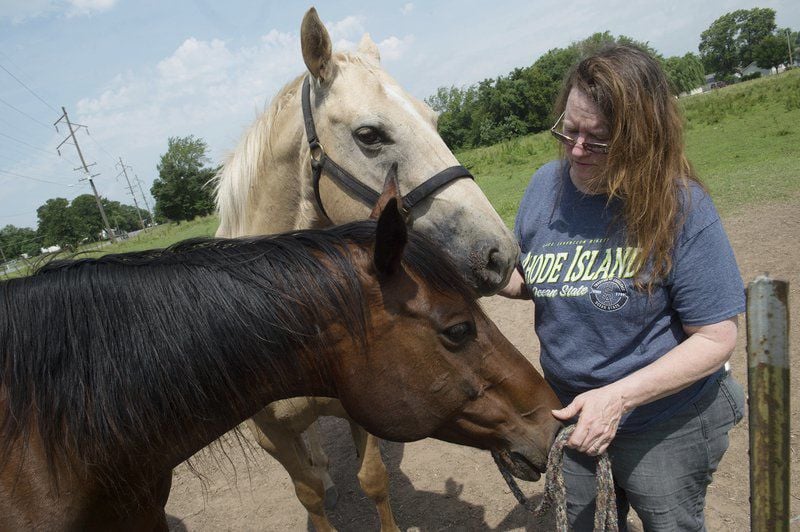 Suzanne Salazar pets her horses Angel and Sunny, who she says were both injured in a recent dog attack. Another one of her horses, Gunther, was injured so extensively in the attack that he had to be euthanized. The dog has been quarantined. The owner of the dog is facing municipal charges. GLOBE | ROGER NOMER 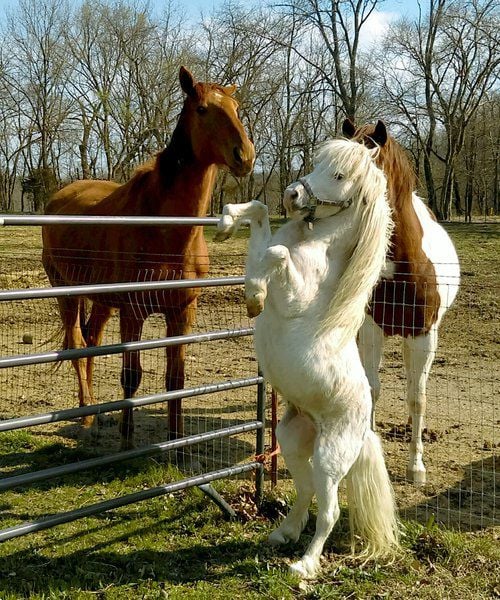 Gunther (foreground), a retired circus pony, was euthanized after being attacked by a dog, according to authorities. COURTESY | SUZANNE SALAZAR 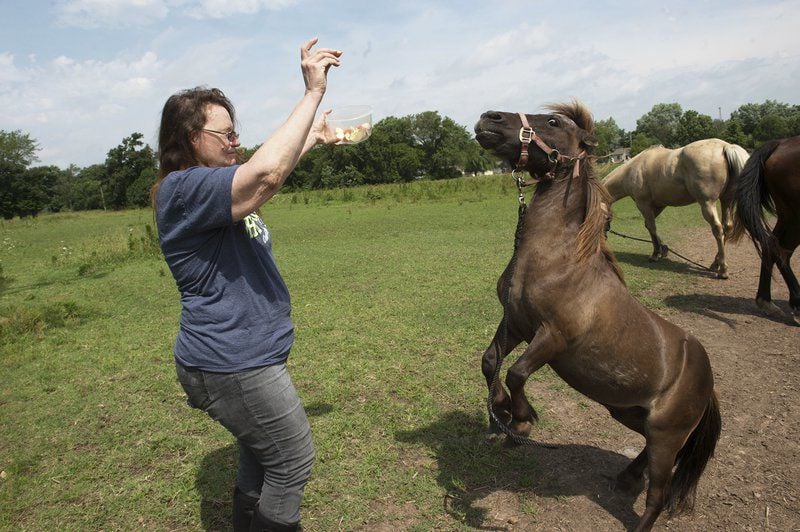 Suzanne Salazar feeds her horse Peewee, who was injured in a recent dog attack, on Friday. Globe | Roger Nomer

Suzanne Salazar pets her horses Angel and Sunny, who she says were both injured in a recent dog attack. Another one of her horses, Gunther, was injured so extensively in the attack that he had to be euthanized. The dog has been quarantined. The owner of the dog is facing municipal charges. GLOBE | ROGER NOMER

Gunther (foreground), a retired circus pony, was euthanized after being attacked by a dog, according to authorities. COURTESY | SUZANNE SALAZAR

Suzanne Salazar feeds her horse Peewee, who was injured in a recent dog attack, on Friday. Globe | Roger Nomer

A Joplin woman faces four city charges in connection with the attack of a dog on a trained circus pony that then had to be euthanized.

The attack took place about 7:15 a.m. Wednesday in a pasture in the 2500 block of Cleveland Avenue in the Iron Gates neighborhood, according to Joplin police.

There were three other horses in the pasture, but Gunther, a white pony that was retired from the Ringling Bros. Circus, had to be put down at the scene by veterinarian Darrell Clark.

Taylor Harris, a resident of the Iron Gates neighborhood, has been charged in Joplin Municipal Court by city Prosecutor Joe Crosthwait with possessing a dangerous dog, allowing the dog to run at large, having no city pet license and having no rabies vaccine for the dog.

Harris, contacted by the Globe at her home, in which a dog could be heard barking, disputed the charges saying that the horse had been sick and that its death was a matter of uncertainty. She said its injuries were not that serious. She contended her dog was attacked by the horse, leaving the dog with a dislocated jaw, broken rib cage and marks where he had been trampled.

"My dog was defending himself," Harris said.

The veterinarian said the horse suffered gruesome injuries on its face and genitalia, and had leg injuries.

"This pony couldn't get away because he was down low with the dog," Clark said. "There was no way he could get away from the dog."

Another Iron Gates resident, Suzanne Salazar, owned Gunther and is the owner of the other horses. She said another miniature horse, PeeWee, who also is a retired circus pony, and a palomino also were bitten but are recovering. She also has a thoroughbred that was not injured.

"These dogs were not playing," Salazer said. "They went for the head, they went for the belly, they were trying to kill," adding "I honestly think Gunther got the worst of it because he got between the other horses and the dogs to protect them."

She said the ponies worked with children for 15 years in the circus and had never been temperamental with people.

"I've owned him almost five years and I worked with him years ago when I was in the circus," she said. "That horse brought joy to so many people," both as a circus performer and to neighbors after he was retired to the Iron Gates pasture, Salazar said. Gunther was trained to do tricks such as standing on his back legs to pose and shaking hands. He and PeeWee performed in the circus for 15 years.

Neighborhood children who liked to visit the horses this week placed flowers in Gunther's memory on the fence after they learned the horse's fate, Salazar said.

A Joplin police report regarding the incident states that police had to use a stun gun to subdue the suspect dog.

Sgt. Andy Blair said officers were assisting animal control officers at the scene to try to capture the dog when it aggressively approached an officer.

"Due to it being aggressive at that point an officer did end up subduing it with a Taser long enough for animal control to gain control of the dog with their equipment," Blair said. The dog immediately recovered from the stun gun and did not show any ill signs afterward, he said.

Ryan Talken, assistant director of the Joplin Health Department, which handles animal control cases, said that as part of the quarantine, the dog will be tested for rabies.

Talken said he is aware that residents in the area of the attack are saying that two dogs or more were involved, but no one has come forward as an eyewitness to give statements that there was more than one dog. He said that anyone with witness information about the attack should call the health department at 417-623-6122 and ask to speak to an animal control officer or leave a message for animal control.

Salazar said she believes the dog had recently been in her yard trying to get to her pet dog, which was in a pen. She said she heard dogs barking early one morning and shouted at the dog thinking that would scare it away. Instead, she said the dog advanced on her and she picked up a yard rake that she used to keep it off her until she could get back into her house.