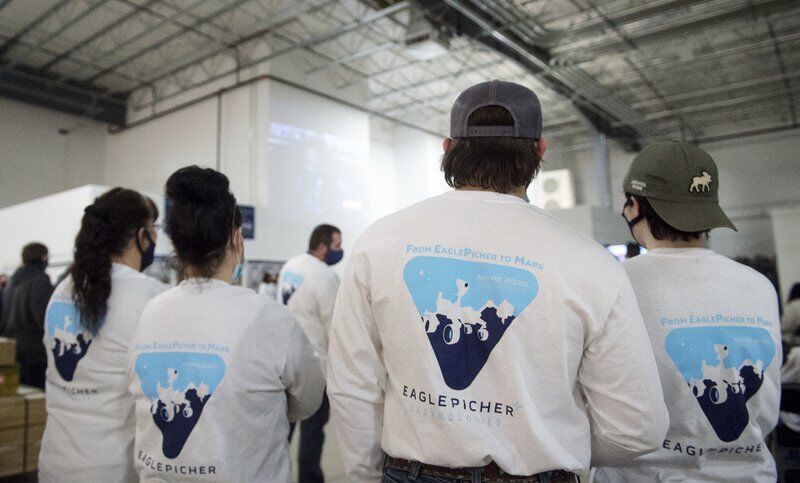 EaglePicher employees wear shirts celebrating the Perseverance rover as they watch the Mars landing on Thursday. The shirts proclaim "From EaglePicher to Mars." The company's batteries have been a part of NASA's missions for decades. GLOBE | ROGER NOMER 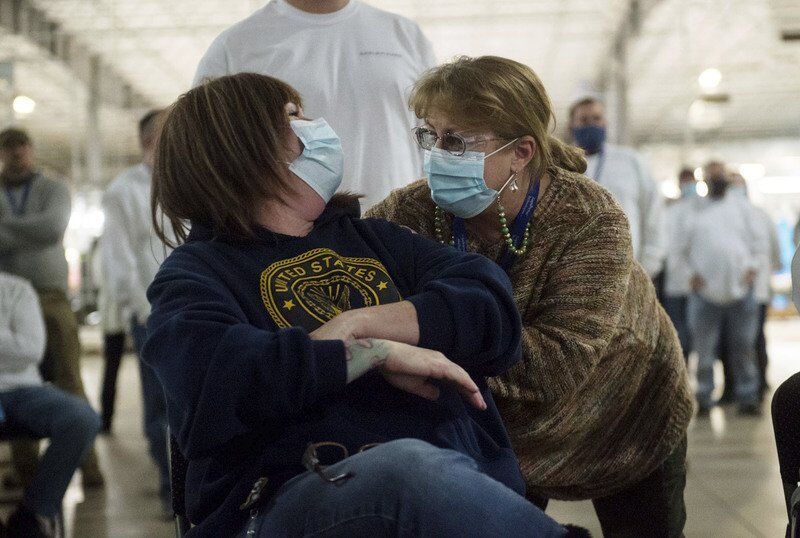 Renee Webb (left), process associate 3 at EaglePicher Technologies, and Barb Gregory, quality assurance, celebrate the landing of the Perseverance rover on Thursday. Both women worked on the batteries for Perseverance at EaglePicher in Joplin. GLOBE | ROGER NOMER 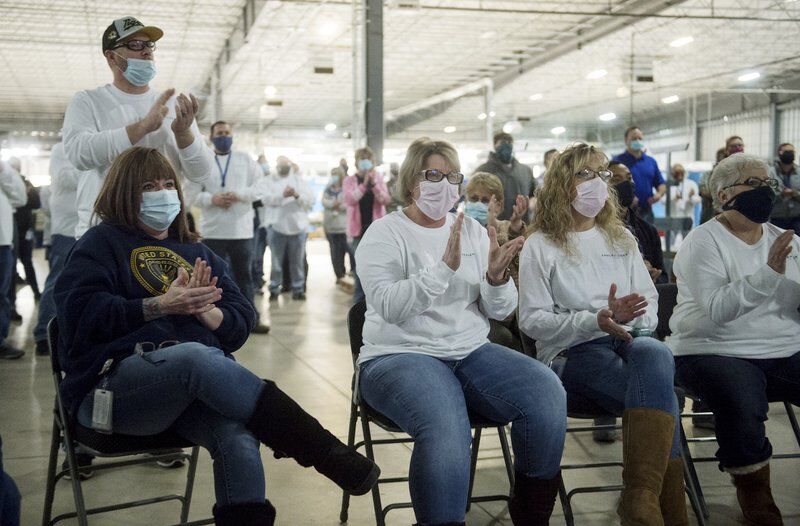 EaglePicher employees applaud as they watch the Perseverance rover land Thursday afternoon on Mars. Company officials say the project has been in the works since 2014. GLOBE | ROGER NOMER

NASA once again found itself on the surface of Mars, with some help from EaglePicher Technologies.

Right on schedule, at 2:56 p.m., the Perseverance rover — using three types of EaglePicher-made batteries throughout the journey of more than 105 million miles — gently landed Thursday on the Martian surface.

Watching a live NASA feed on a large-screen television, nearly 100 EaglePicher employees and engineers remained mostly silent during the seven minutes it took the spacecraft to drop from orbit to the planet’s surface. Only when it was announced that the car-size rover had survived touchdown did they let loose with applause and more than a few whoops.

While their reactions to the landing was a bit more reserved compared with those beamed from the NASA Jet Propulsion Laboratory in Pasadena, California, there’s a simple reason for that. EaglePicher batteries have powered every U.S. spacecraft, manned and unmanned, since 1958, when Explorer 1 became the country’s first satellite. Over time, EaglePicher employees have grown accustomed to success in outer space.

“I think we are really reserved, holding our emotions inside more than expressing them,” said Heather Mauk, the company’s quality manager. “We wait for the confirmation that things are functioning correctly” before celebrating.

As she spoke, nearly everyone who attended the landing was gathering behind her for a group photo, each wearing a T-shirt proclaiming “From EaglePicher to Mars.”

"We have always focused on the quality of our products we deliver because (in their line of work) there's no second chances; there is no possibility of a do-over," Mauk continued. "There's a lot of money riding on a mission like this, and our goals have always been to do it right the first time."

The six-wheeled machine, nicknamed Percy, isn’t the first NASA-made rover to explore the Martian surface. Percy is the fifth. What sets this $2.7 billion mission apart from previous rovers, however, is its array of 19 cameras and seven instruments that will search for signs of past microbial life as well as the presence of water. The collected data could lead the way for the first human landing on Mars and its eventual colonization.

Renee Webb was among those gathered for the group photo shoot Thursday; the 17-year company veteran had spent three weeks building and wiring together the 87-pound lithium-ion battery that now sits inside the rover.

Or, as she described it, a little part of her now sits on Mars.

"My grandkids get so excited about it," she said. "Did you build that?" they would ask.

She sometimes has trouble explaining to others what she does for a living. When she says she builds batteries, people immediately think of tiny AAA batteries that can be held between two fingers. In actuality, Smith pieces together batteries that can weigh more than 300 pounds and power anything from a Landsat imaging satellite to one of the retired space shuttles.

Watching Percy land on Earth's neighbor, she said, "makes me very proud of what I do."

Webb's hand-constructed lithium-ion battery, along with a second, identical battery, will now supply power to the rover during its yearlong exploration of Mars. Four thermal batteries powered the craft during its seven-minute descent Thursday, including the deployment of the craft's parachute. And 10 silver-zinc batteries helped power the Atlas V booster rocket when it launched Perseverance on July 30. All told, EaglePicher batteries powered nearly every aspect of the mission's key stages of flight.

Ron Nowlin, the general manager of the company's aerospace division, let out a cross between a sigh and a whoop when the rover's wheels finally touched down.

"It was probably more of a sigh, really, just because that was our biggest concern — making sure you get there after all of the years of planning and preparation," he said. The project had begun in 2014.

No key aspect of this mission could have taken place without the power provided by the Joplin company’s batteries, he said.

"Some of our batteries, like the lithium-ion ones, we can test and cycle them and make sure they perform the way we want them to," Nowlin said. Thermal batteries, on the other hand, "you only get one shot at it. And like the guys at NASA say, some of the systems on this (craft) you're not really able to test them on Earth. You have to design them and hope that they work when they get there. And that's probably the biggest thing about this in my mind — you can only test them so much and you just have to make sure that they all work in the end."

CAPE CANAVERAL, Fla. (AP) — A NASA rover streaked through the orange Martian sky and landed on the planet Thursday, accomplishing the riskiest…