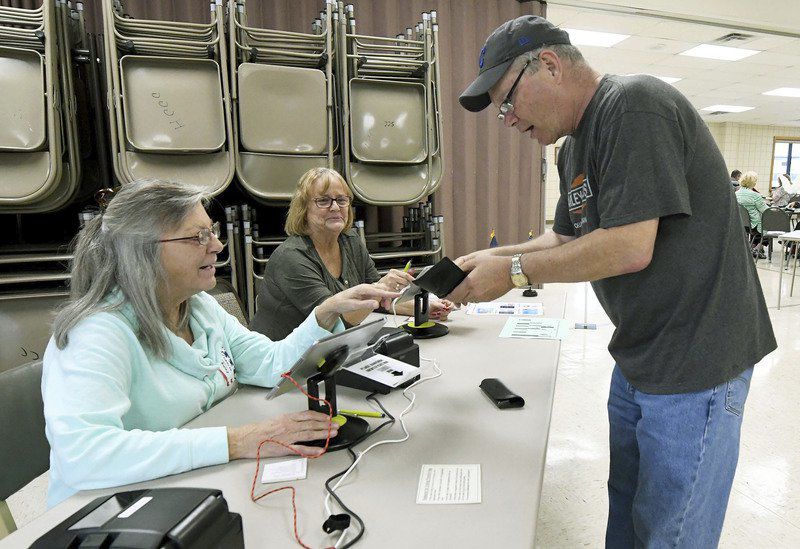 Election officials Frances Tewell (left) and Joyce Kovacic staff the check-in table as Don Noland pulls his license from his wallet during early voting for the 2018 midterm election at the Homer Cole Community Center in Pittsburg. GLOBE | LAURIE SISK 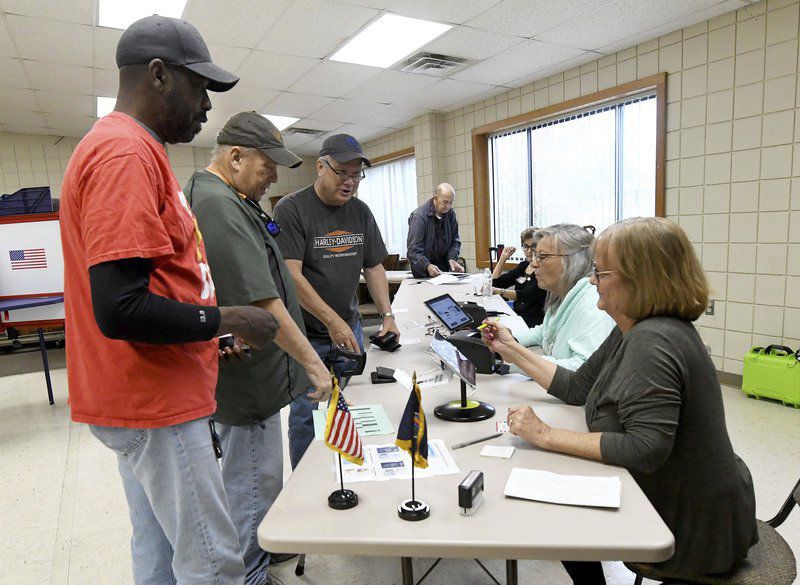 Voters check in to cast their ballots during early voting this week for the 2018 midterm election at the Homer Cole Community Center in Pittsburg. GLOBE | LAURIE SISK 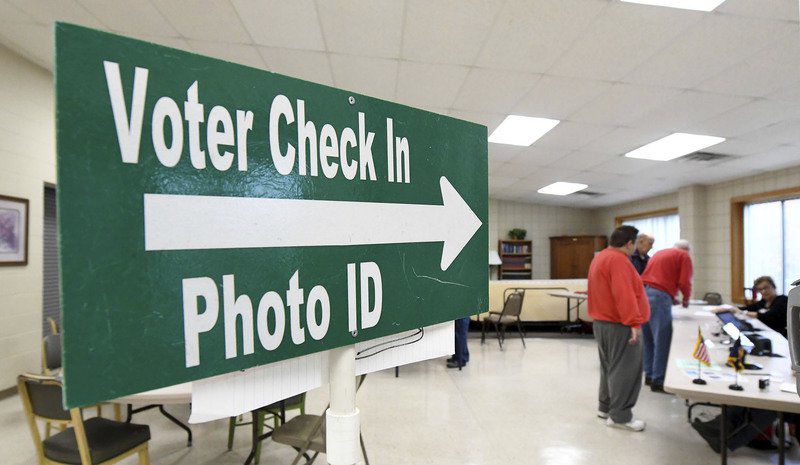 Crawford County residents check in this week to cast their ballots during early voting for the 2018 midterm elections at the Homer Cole Community Center in Pittsburg. Election officials reported heavy turnout for early voting at the site. Officials note that Missouri is the only state in the Four-State Area that does not allow early voting for convenience. GLOBE | LAURIE SISK

Election officials Frances Tewell (left) and Joyce Kovacic staff the check-in table as Don Noland pulls his license from his wallet during early voting for the 2018 midterm election at the Homer Cole Community Center in Pittsburg. GLOBE | LAURIE SISK

Voters check in to cast their ballots during early voting this week for the 2018 midterm election at the Homer Cole Community Center in Pittsburg. GLOBE | LAURIE SISK

Crawford County residents check in this week to cast their ballots during early voting for the 2018 midterm elections at the Homer Cole Community Center in Pittsburg. Election officials reported heavy turnout for early voting at the site. Officials note that Missouri is the only state in the Four-State Area that does not allow early voting for convenience. GLOBE | LAURIE SISK

The Crawford County clerk's office took its Southeast Kansas show on the road this week.

Clerk Don Pyle and his office crew are setting up satellite locations where Kansans can come and cast their ballots in the midterm voting ahead of Election Day, which is Tuesday.

Pyle said early voting in the state benefits both residents and election authorities.

"One of the biggest reasons to do it is for convenience, I guess, if you would call it that," he said. "Although for some people, it’s almost a necessity to be able to vote early. We talk to people who are working two jobs and things like that, have a hard time being able to get to a polling place on Election Day, and this gives them a place where they can go and do that on their schedule a little bit more.

"And also, it helps to relieve a little bit of the pressure on our traditional polling places on Election Day to get as many people voted ahead of time as we can."

Jasper County Clerk Marilyn Baugh said Missouri residents can vote before Election Day only by filling out an absentee ballot and signing a form declaring they are unable to vote on the day of the election for one of the following reasons: absence from one's precinct on Election Day, incapacitation due to physical illness or disability, religious beliefs or practices, working as an election judge or polling place official, or, in some cases, incarceration where voting rights have been retained.

Baugh said people commonly show up in the clerk's office in the days before an election and ask to vote early, only to be told that they cannot do so simply for the sake of convenience. She said the state Legislature has discussed establishing full-fledged early voting in years past but that the most recent proposal could actually have been more onerous for her and other election workers.

"They were trying to add many more weeks on it, and they were extending the hours way past regular hours — had to be open several Saturdays," she said. "You were talking a lot of overtime and stuff for staff. And it’s just my opinion, if they would go with the six weeks (the current absentee voting period), regular hours like we have now, and the Saturday before the election, and just change that and call that early voting, that’s just the simplest thing ever."

But Baugh said she in general supports early voting, period, and believes the state will eventually implement it.

A number of Southeast Kansas residents have already filtered through Pyle's satellite polls this week. Some said they would be out of town next week and unable to vote, while others simply opted to vote early for convenience.

Dan Brunetti, of Frontenac, was one of the voters who said he will be absent on Election Day.

"This is a great advantage so that I can vote," he said. "I didn't have to set up for an absentee ballot. (It's) convenient to stop by here, two blocks from my house, so it made it easier for me. I travel a lot, so an early ballot, I used to do those absentee, but now I can come to a place like this and vote."

Carl Zafuta, also of Frontenac, said his job with Kansas City Southern Railroad will keep him from being able to go to the polls on Tuesday.

"It's very important that there are places around Pittsburg this week that we can go vote," he said. "Very convenient," was his judgment of his first time voting early.

Gene Vogler, of Pittsburg, said he voted early solely because he thought it would be less crowded than going on Election Day, and that early voting can help ensure as many people as possible have the opportunity to cast a ballot.

"I voted early so I wouldn't have to wait in line," he said. "I think that one of the problems we have is that we don't make voting easy for everybody. There seems to be some people that try to make voting difficult. Everybody should vote. The whole idea is if you want to change things, what other way is it to make things better than to vote? That's the only choice we have short of mass revolution, which is something that I don't think anybody wants."

Another growing trend across the country is voting by mail. In fact, three states — Washington, Oregon and Colorado — conduct some elections entirely by mail.

Voters in Kansas and Oklahoma have the option to request mail-in ballots for some elections, while Arkansas and Missouri do not allow votes to be cast by mail. Pyle said some Kansans feel more secure voting in person, whether early or not, than putting a ballot in the mailbox.

"They’re in a place that really is set up like a regular polling place and the ballot is in our possession, so they know it’s going to be counted," he said.

Pyle said that in Crawford County, roughly 1,000 people cast early ballots in even-year elections, which are those that include statewide and national races and issues. That number, he said, represents about 5 percent of the county's registered voters, and an even larger slice of the average 30 to 40 percent turnout in midterm elections, and 60 to 70 percent for presidential years.

As for concerns about security and election integrity, Pyle said that officials are able to enforce all of the same identification and verification laws and practices for early votes that are in place at precincts on Election Day.

"For this particular election, there’s 56 different precincts with a particular ballot style for each one of those so we need to have ballots available for voters from any of those precincts," he said. "But as far as security on (early voting), voter identification, all the same rules are in place as on Election Day, so I don’t see any security issues there."

Pyle and Paige Bearden, the clerk in Ottawa County, Oklahoma, both said Monday that they see a variety in the ages and circumstances of people who choose to vote early.

"Once they discover that we offer early voting, they’re usually happy to have that option instead of having to go on Election Day," Bearden said. "Especially if they’re traveling."

Missouri is the only state in the Four-State Area that does not allow residents to vote early without one of a few specific, designated reasons.

In Kansas, residents may vote several weeks before a scheduled election. Crawford County residents have been able to vote at the courthouse in Girard, Kansas, since Oct. 17.

Oklahoma allows voters to cast ballots on the Thursday, Friday or Saturday before a state or national election.