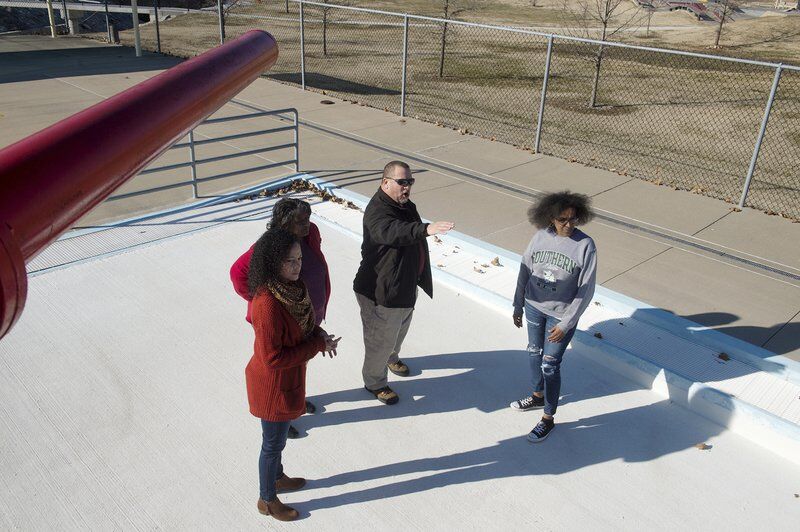 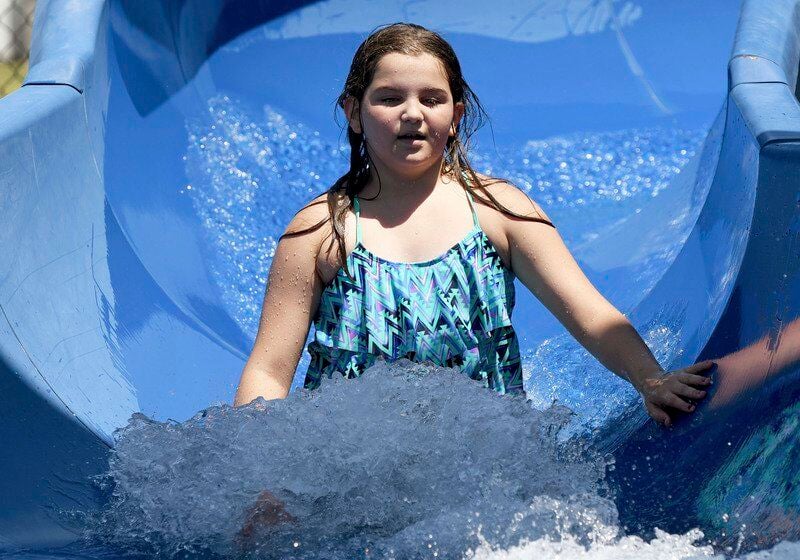 Eleven-year-old Chanley Cumpton cools off with a trip down the slide at Ewert Pool in July 2017. GLOBE FILE | LAURIE SISK 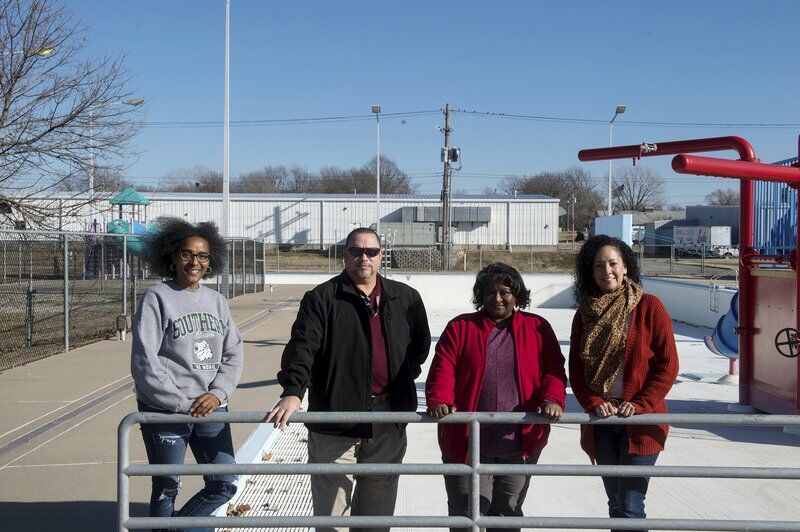 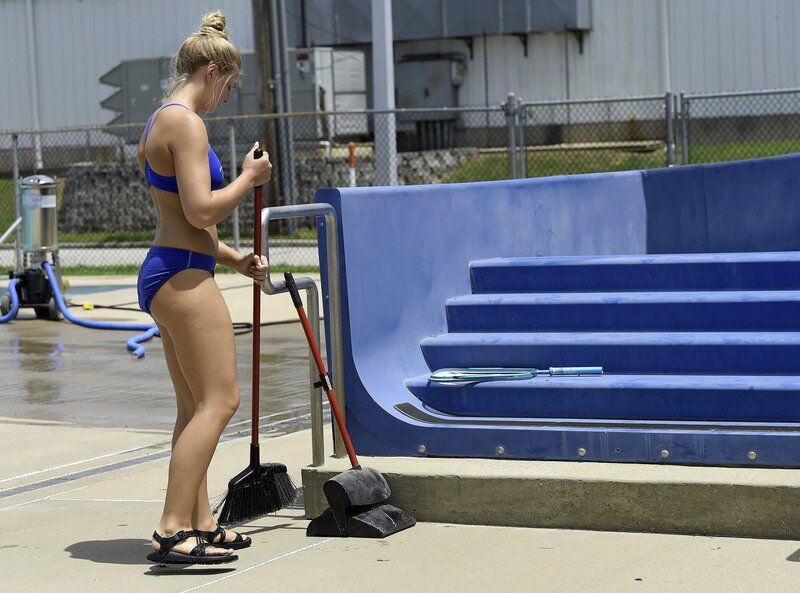 Lifeguard Olivia Patterson cleans up an area of Ewert Pool in May 2018 to prepare for its season opening. Globe file | Laurie Sisk

Fred Palmer has a personal story about Ewert Pool.

"It was at that very pool when it was segregated and only Blacks were able to attend and Blacks could not attend any other parks in the community where my mother was a lifeguard at the age of 13 years old. My father saw her (there) and fell in love with her. They were married 60 years and raised their family proudly in the city of Joplin," Palmer said.

Many residents of Joplin's East Town neighborhood have those personal attachments to the pool. So when the city began an effort last year to conduct an assessment of the pool's condition and seek a recommendation on its future, residents with ties to the park followed the process closely.

Palmer represented that group, the Ewert Park Stakeholder Committee, in speaking to the City Council at a meeting last week on the results of the study. He spoke about the interest of the residents in protecting the future of both the pool and the park, which was gifted to the Black community during the era of segregation. The 14-acre park was deeded to the Black community by Paul A. Ewert and his wife, Sidney, in 1924.

Ewert Park and its pool are where many relationships were forged and celebrations such as the annual Parks Day, formerly the Emancipation Day Celebration, have been held through the years. It also is located along Route 66, another piece of history important to park proponents.

"That's the big part of it: It's the history and the memories," said Melodee Colbert-Kean, a member of the committee who formerly served on the City Council and is a former president of the National League of Cities.

The city is preparing projects that could be done if voters later this year approve a 10-year renewal of the city's quarter-cent parks and stormwater sales tax. As part of that, the city hired Water's Edge Aquatic Designs of Lenexa, Kansas, which worked with Landwerks Studio, of Olathe, Kansas, and Corner Greer & Associates, of Joplin, to assess the condition of Ewert Pool and recommend whether it should be repaired, rebuilt or replaced.

Lauren Ozburn, projects planner for Water's Edge, told the council last week that the recommendation is to replace the pool with a water splash park for summer and an ice ribbon surrounding the splash park to provide winter activity.

It was a disappointment to the Ewert supporters.

"We would much rather have seen the pool kept up, but we understand economics," Colbert-Kean said of problems found with the pool's condition.

Ewert Pool is the lowest in attendance of the city's three pools and water parks, Ozburn said. That made the cost per visitor to operate the pool $20, compared with $8 for Schifferdecker and $11 for Cunningham. The city in 2019 recouped only about 14% in paid admissions and concessions to offset the costs to operate the pool. In comparison, cost recovery at Cunningham was 48%, and at Schifferdecker it was 77%.

Jeff Bartley, a principal designer for the firm, assessed the pool's condition as fair. The pool was built in 1974 and renovated in 2003 with an expansion.

"That portion of the pool hasn't fared as well and requires a fair amount of reconstruction," Bartley said of the addition.

There is widespread failing of the renovated pool floor and walls. Most of the pool lights don't work, and there are issues with deck settling and the slide as well as some of the shade and play structures, Bartley said.

The consultants also offered a second option but didn't recommend it. That option is to renovate the pool and add splash park features. The cost would be at least $1 million more than the recommended fix, which is to build a splash park with the ice rink, which would be a 12-foot-wide frozen skating path around the splash park.

City officials believe renovating the pool would leave Joplin's parks departments in the same tight spot with staffing that it has experienced over the past several summers. Ozburn told the council that the declining availability of lifeguards is a national trend.

Paul Bloomberg, parks department director, said that when Schifferdecker was rebuilt into a water park and pool, it was believed it would be a destination attraction that would pull in visitors. Instead, it has pulled local residents away from Ewert and Cunningham.

In regard to the city's situation finding enough lifeguards to staff three pools, "we're struggling," Bloomberg said. "There is no way we can operate three pools" all season and keep them open as many hours as in past years because of the lifeguard shortage, he said.

Palmer said that after hearing those details, he is not as strong in his support for keeping the pool as he had been before. But there are important historical and community considerations that should figure into the decision, he said.

"Historically, in the era of segregation, there was not a facility in Joplin, Missouri, set aside for people of color to attend," Palmer said. The land for the park was donated and deeded to the Black community and named after the donor to rectify that, he said.

The residents committee reviewed the responses to the survey and the details of the condition of the pool.

"This weighs heavy on us, what is done with Ewert Park. And not only that but what has happened over time with the deterioration of Ewert Park's pool," Palmer said.

Many residents remember riding their bikes to the pool and forging friendships at the park and the pool, he said.

"Splash park (and) ice ribbon versus the renovation of the pool — that was hard, hard sell to think about a splash pad," Palmer said. "Many of our seniors in our community said, 'Splash pad? What is a splash pad?' And how are you going to replace our pool, one that has held true to us and is so tied into our experiences growing up in the Joplin community, with a splash park?"

After the consultants developed some options for the pool last year, a public meeting was held in October. At that meeting, resident Irene Carr said she didn’t think children in East Town wanted to lose their place to swim.

"Older children are not going to be playing in this splash park," Carr said. "That’s just not going to work because it’s not working now. They’ve got to have some kind of place to swim, and you can’t swim in a small amount of water. The teenagers or even the adults, they’re not going to come there for that."

Resident Patsy Robinson said removing Ewert Pool would take away a part of the Black history of Joplin.

"The pool was one of the things that was provided for the Black community because they weren’t allowed anywhere else," Robinson said. "We were the minority when it was built for us because we couldn’t go to Schifferdecker or Cunningham parks. It needs to be kept as part of our community, in whatever way you need to keep it."

But when the proposal was presented to the residents of the group about the cost and the difficulty in providing enough lifeguards to operate the pool, Palmer said that's something residents said they don't want, either.

A subcommittee of the community group met to discuss alternatives if they could not continue to have a pool. Those include:

• An amphitheater with seating to hold Black plays and concerts and other performances. Palmer said this suggestion had overwhelming support. The amphitheater could replace a diamond-shaped basketball court built in the park that is not adequate for the sport, he said.

• A mural depicting life in East Town and activities in the park and pool.

• Decorations of Afro-centric art and history.

• An upgrade to another basketball court in the park that is located next to Joplin Creek. It needs a fence to keep balls from bouncing into the creek as well as paint and other repairs.

• A multiuse pavilion with a shade and rain cover.

Palmer said there was a fear in the Black community that city officials had already decided what they would do with Ewert Park and its pool and that residents would not have a voice in the process. But he said that concern was rectified by the council's willingness to listen to him at last week's meeting.

Palmer said the group's first preference is to keep and renovate the pool. He said it was believed that after the last renovation, the pool was not marketed as it should have been. Leaving details off the last project, such as not covering the pool filters to keep them protected, might cause concern that corners also would be cut on a new build.

A main concern is that "there is something there for the community to access" and something visible from heavily traveled Seventh Street that residents could say is "ours," Palmer said. He also indicated their preference is to maintain something that could educate people about the history of the Black community and their experiences here.