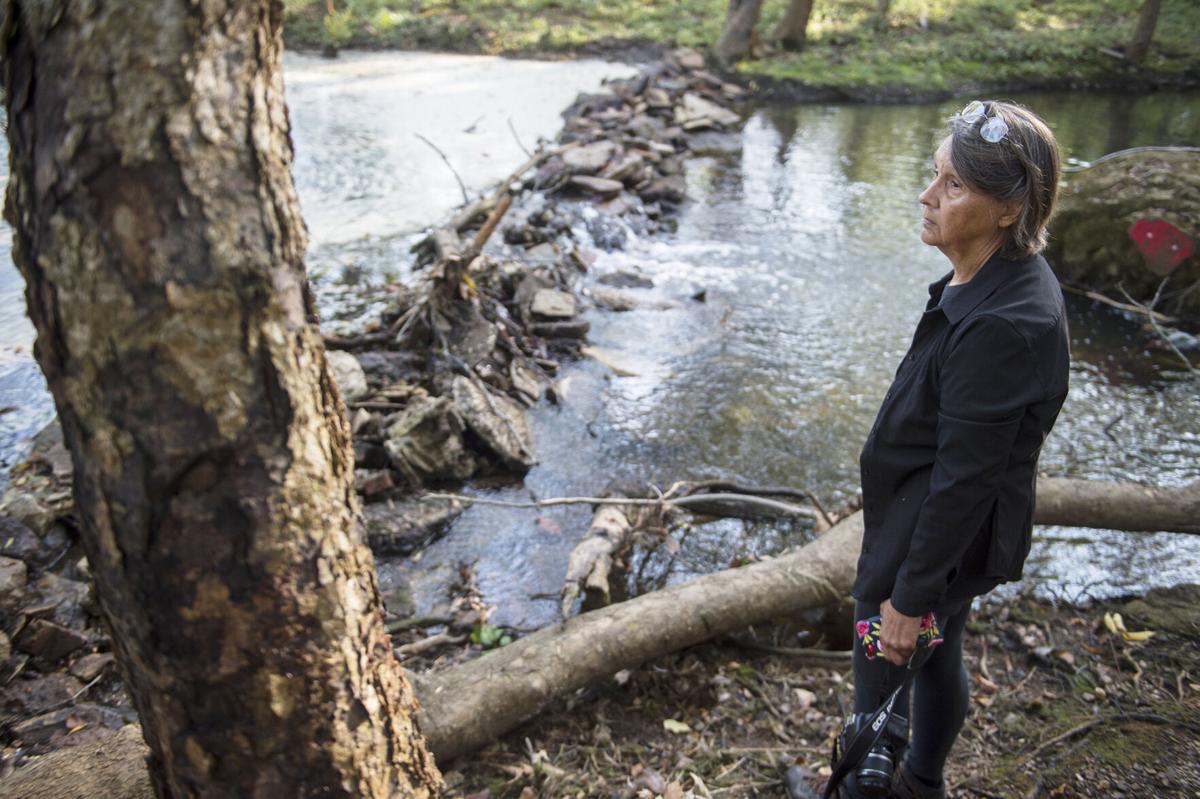 Environmental activist Rebecca Jim talks about a makeshift dam in Tar Creek recently in the Miami area. Jim has been one of the leaders in the effort to clean up the Superfund site. 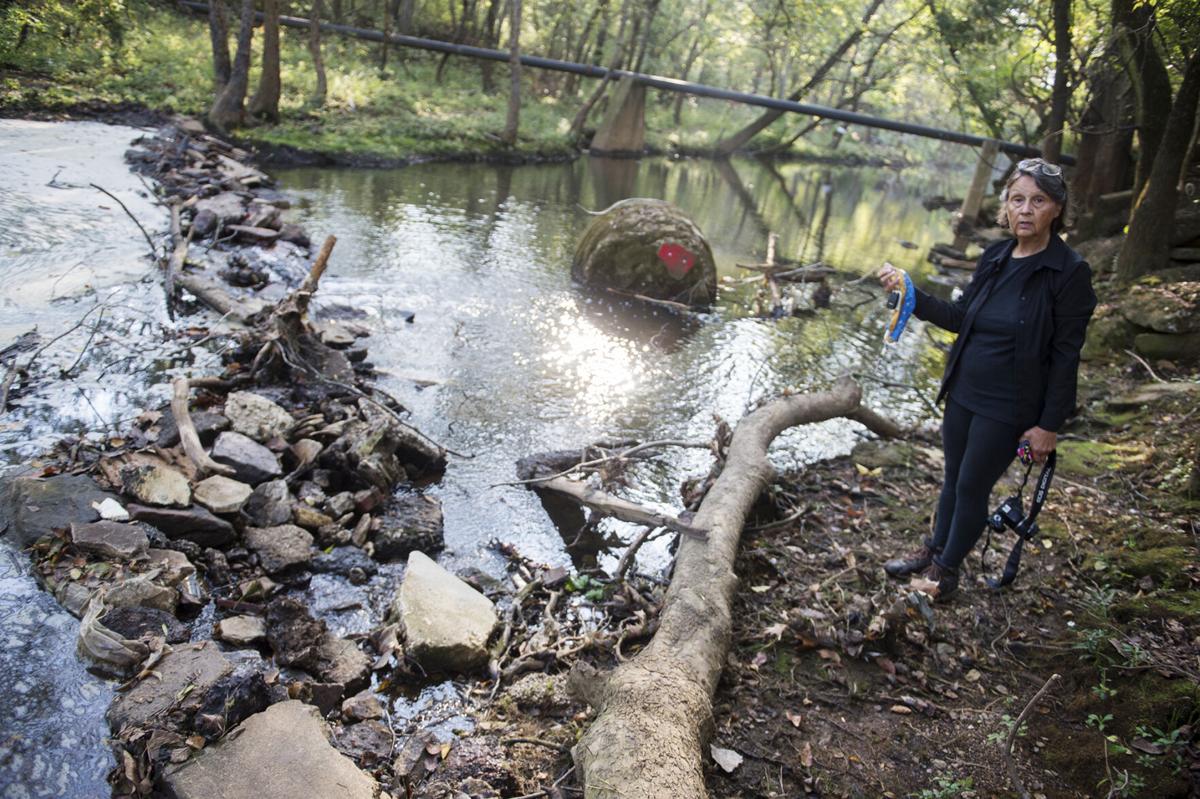 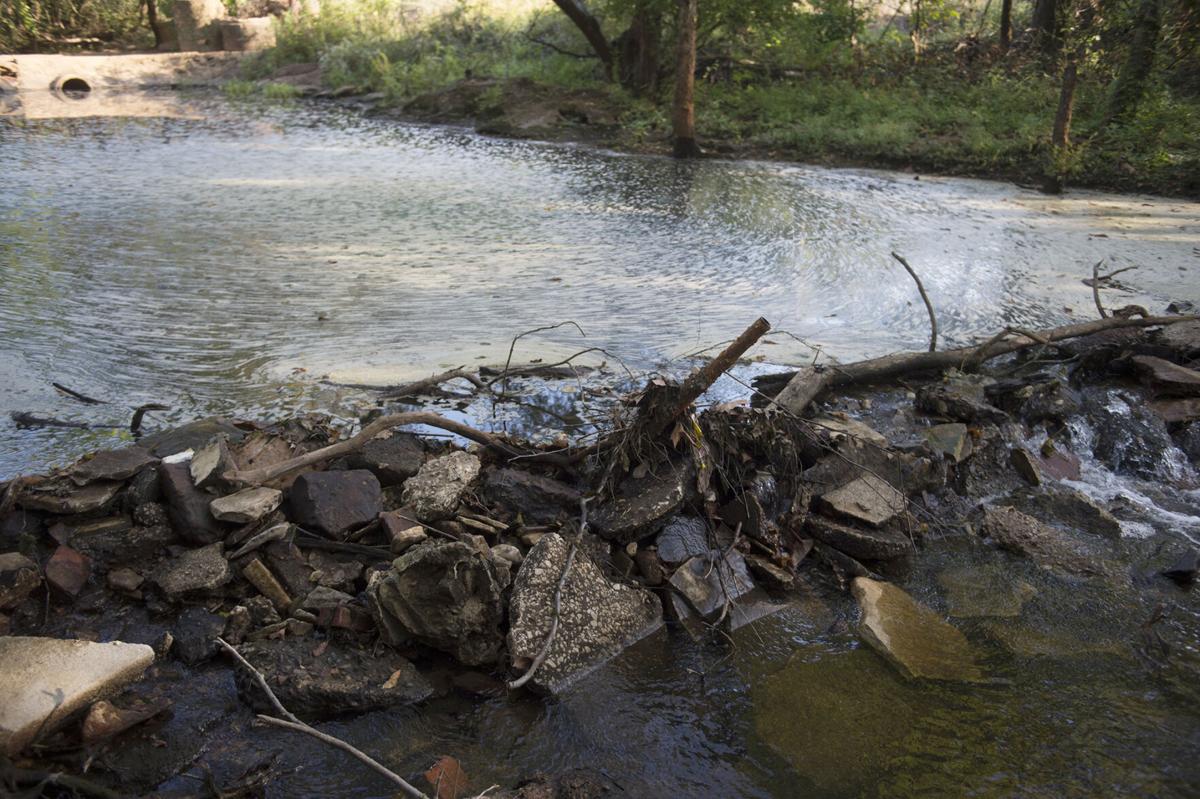 A man-made dam pools water in Tar Creek in Miami. 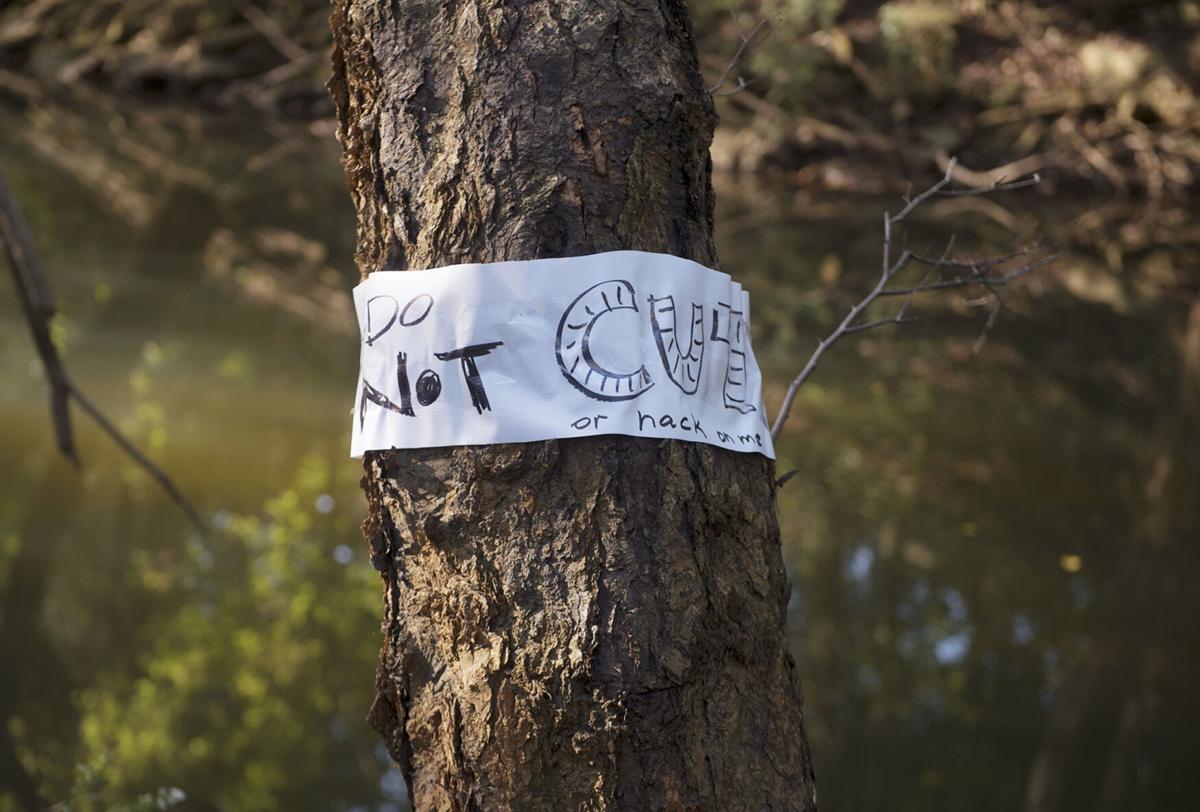 A sign reminds visitors to Tar Creek to not cut down trees that help keep the stream in its banks. Environmentalist Rebecca Jim is sounding the alarm about youngsters swimming in the contaminated creek. GLOBE | ROGER NOMER 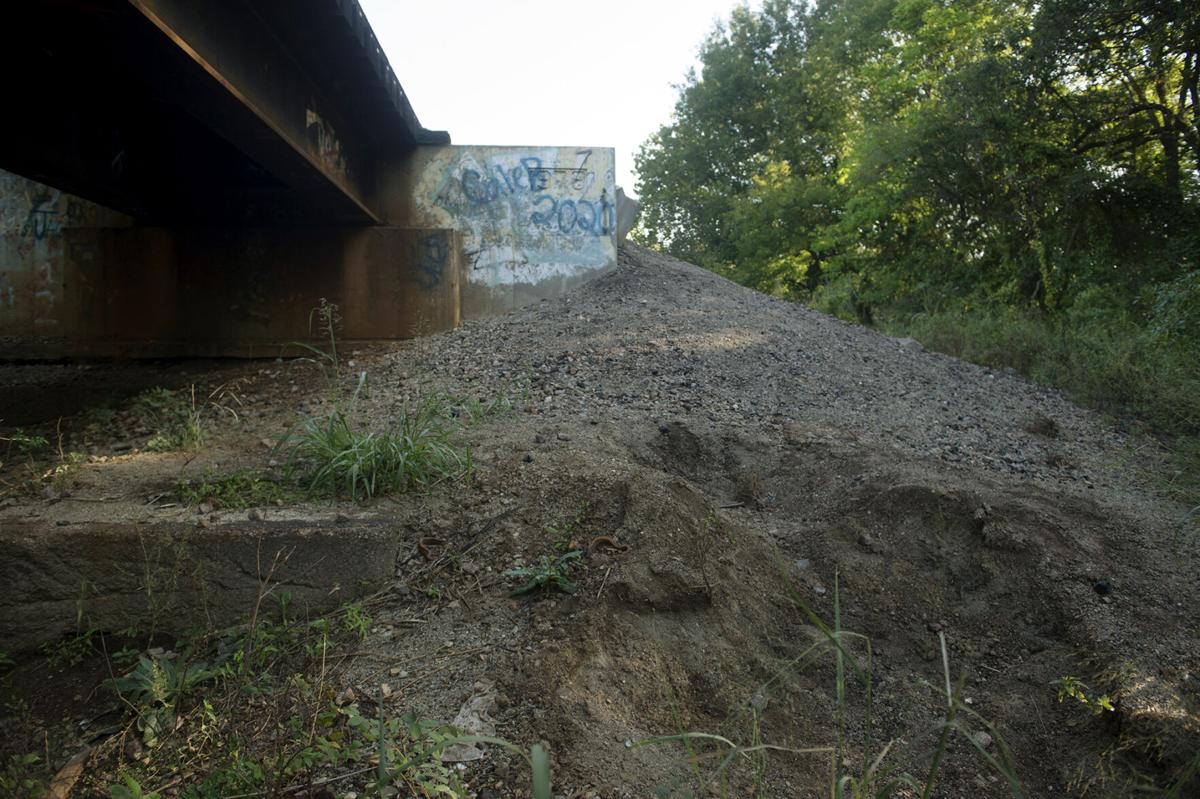 Chat along railroad lines has been removed and placed in Tar Creek in Miami. 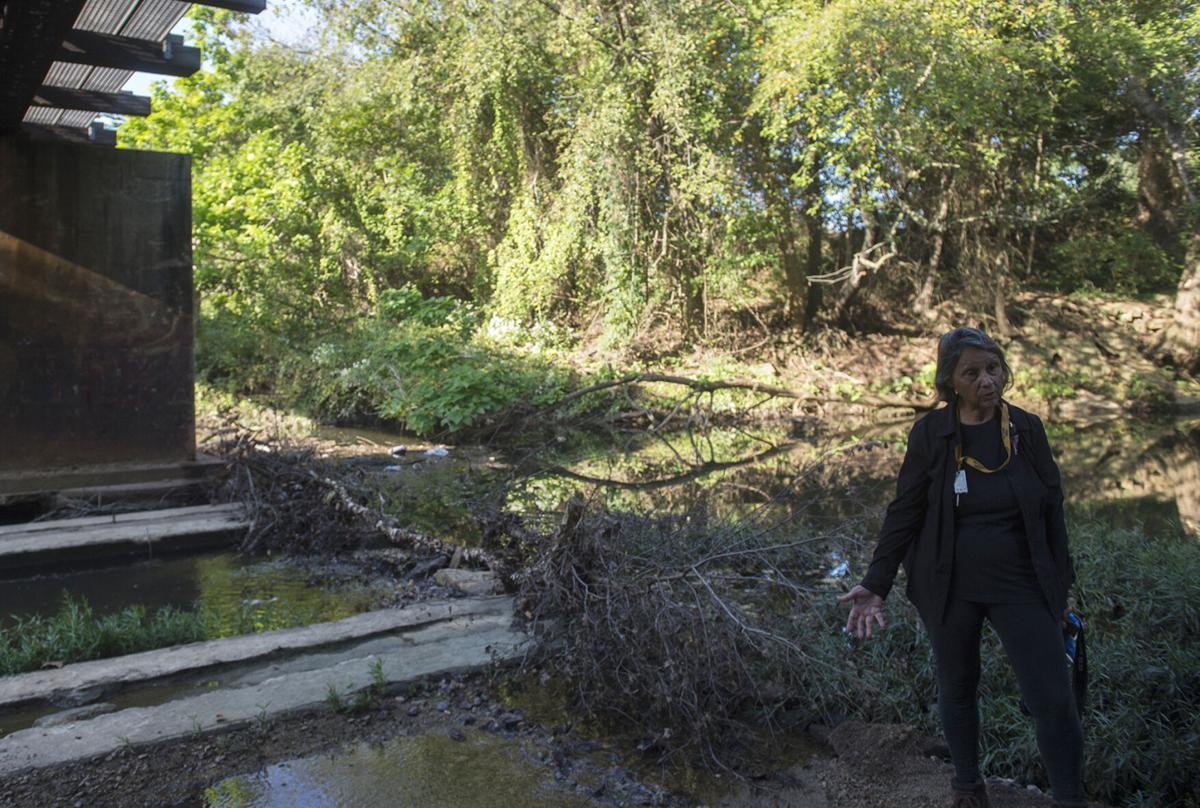 Environmental activist Rebecca Jim talks about a makeshift dam in Tar Creek recently in the Miami area. Jim has been one of the leaders in the effort to clean up the Superfund site.

A man-made dam pools water in Tar Creek in Miami.

A sign reminds visitors to Tar Creek to not cut down trees that help keep the stream in its banks. Environmentalist Rebecca Jim is sounding the alarm about youngsters swimming in the contaminated creek. GLOBE | ROGER NOMER

Chat along railroad lines has been removed and placed in Tar Creek in Miami.

MIAMI, Okla. — Miami’s Rebecca Jim, one of the leading environmental activists in the former Tri-State Mining District, continues to sound the alarm about the dangers, primarily to area children, of exposure to lead.

More than $300 million has been spent to clean up the toxic metals left behind from former lead and zinc mining in the region. Tar Creek made this year’s top 10 list of “America’s Most Endangered Rivers” by American Rivers, a river conservation organization in the United States.

The stream, which runs blood-red at times, is a tributary to the Neosho River, and so polluted with mine water that it has been deemed unsafe, especially for full-body contact, for decades. But Jim, who is Tar Creek keeper with the Waterkeeper Alliance, says children and others have been swimming and fishing in the creek again recently, and apparently because of her tenaciousness in the matter, multiple governmental agencies say they are reacting to the alarm.

The 11-mile creek flows through the Tar Creek Superfund Site, being fed by acidic mine water and laden with lead, zinc and cadmium from historic mining activity in the region.

Bless Parker, Miami mayor, said he can remember being told not to swim or fish in Tar Creek when he was a youngster.

Jim, who co-founded Local Environmental Action Demanded Agency in 1997 to educate the community on environmental concerns and take action against environmental hazards. Jim now serves as the LEAD Agency’s executive director, and is associated with the Waterkeeper Alliance, a worldwide environmental organization founded in 1999 by Robert Kennedy.

A million gallons of acidic mine water has run into Tar Creek daily since the late 1970s, she said.

Jim in June first noticed makeshift dams portions of Tar Creek near Miami’s Northeastern A&M College. Shortly after, more dams began popping up, and she saw children swimming in the creek. They were adding rope swings, cutting down trees and using chat from an adjacent BNSF railway to aid in the construction of the dams to pool water for swimming. Jim reported four dams and said she’s concerned for human health.

“There’s definitely bacteria in this water,” Jim said at one of the dam sites last week. “We’ve tried telling the kids that it’s not good water to swim in.”

Results from a federal study released in 2019 found that more than 80% of the nearly 2,000 surface water samples collected in Tar Creek had levels of lead higher than a comparable creek outside the Superfund area, according to the EPA. High levels of heavy metals were also found in fish, plants, mammals and invertebrates.

Lead exposure can cause damage to the brain, nervous system, kidneys, blood cells and/or the reproductive system. According to the Centers for Disease Control and Prevention, lead poisoning in children can cause lower IQ, decreased ability to pay attention and underperformance at school.

Blood-lead sampling data collected by the Indian Health Service during the 1990s showed that 35% of the children tested at the IHS clinic in Ottawa County had elevated blood lead levels.

The LEAD Agency has been teaming up with other groups to place warning signs where the children have been fishing and swimming. Jim said she’s working with NEO, the Eastern Shawnee Tribe and the Peoria Tribe to collect and analyze water samples at the sites of recreational activity.

“We’re pulling all of those results together, and we’ve notified the health department,” said Jim. “It’s definitely a health hazard.”

The issue has been reported to numerous local, state and federal agencies including the city of Miami, the U.S. Environmental Protection Agency, the Oklahoma Department of Environmental Quality, the Grand River Dam Authority, the Oklahoma Water Resources Board and the U.S. Army Corps of Engineers.

“Some of this is city property, some is county property and some is GRDA property,” said Jim. “We turned this into the ODEQ, since it’s a violation of the Clean Water Act. You cannot dam any stream, any river or any creek. It’s against the law.”

“In regards to the complaint about the children swimming in Tar Creek, DEQ is meeting with EPA and ATSDR (Agency for Toxic Substances and Disease Registry) to discuss any actions,” Erin Hatfield, communications director with ODEQ, said in an email to the Globe. “EPA has asked their risk assessment team to review the situation. There are many state and federal agencies that are aware of the situation and are acting to address it.”

The EPA referred the Globe back to ODEQ for any questions and vice versa. GRDA did not respond to the Globe’s request for comment.

Ben Loring, attorney for the city of Miami and a former state lawmaker, said the next step in the process is to find who owns the property along Tar Creek where the dams are located, which are behind the truck route near 10th Avenue Northeast and B.J. Tunnell Boulevard within the city limits of Miami.

“We’re prohibited by law from going onto private property and doing work,” said Loring. “We’re trying to figure out who owns it, and it’s been pretty difficult. That’s step number one. We’ve gotten clearance from the Army Corps of Engineers as to what and how they would want us to do it, but we’re still trying to figure out if we can legally do it.”

Tar Creek and the Grand River feed a major drinking water source for thousands of Oklahomans — the Grand Lake O’ the Cherokees, created by Pensacola Dam.

Former lead and zinc mining had boomed in the region in the early 1900s and continued in declining degrees until approximately 1970. Mining and milling of ore, primarily lead and zinc, produced more than 500 million tons of waste in the area. The mine waste had contributed to elevated blood-lead concentrations in as high as 43% of children in some communities, according to the Oklahoma Department of Environmental Quality.

In 1983, the EPA added Tar Creek to the federal National Priorities List, making it one of the oldest and most complex Superfund sites in the world.

The Tar Creek Superfund Site in Oklahoma is part of the Tri-State Mining District that spans through parts of Southwest Missouri, Southeast Kansas and Northeast Oklahoma. The district covers 2,500 square miles and includes parts of Ottawa County impacted by historical mining wastes.

The EPA identified the site on the Superfund Task Force List of “Superfund Sites Targeted for Immediate, Intense Action” in July 2018. The Quapaw Nation and ODEQ are leading cleanups under cooperative agreements with the EPA, making it the first Superfund site in the nation at which a Native American tribe is leading site cleanup.

With funding assistance of over $9 million, ODEQ and the Quapaw Nation have removed approximately 568,000 tons and 1 million tons, respectively, of toxic chat from the Superfund site so far, according to the EPA.

Site cleanup continues and over $15 million of funding was provided to ODEQ and Quapaw Nation in fiscal 2020 to continue work, according to the EPA Administrator’s Emphasis List of Superfund Sites Targeted for Immediate, Intense Action.

My son, it's been two years since God took you to Heaven. We miss you everyday. Love you always, Your mom, Jackie Hailey.