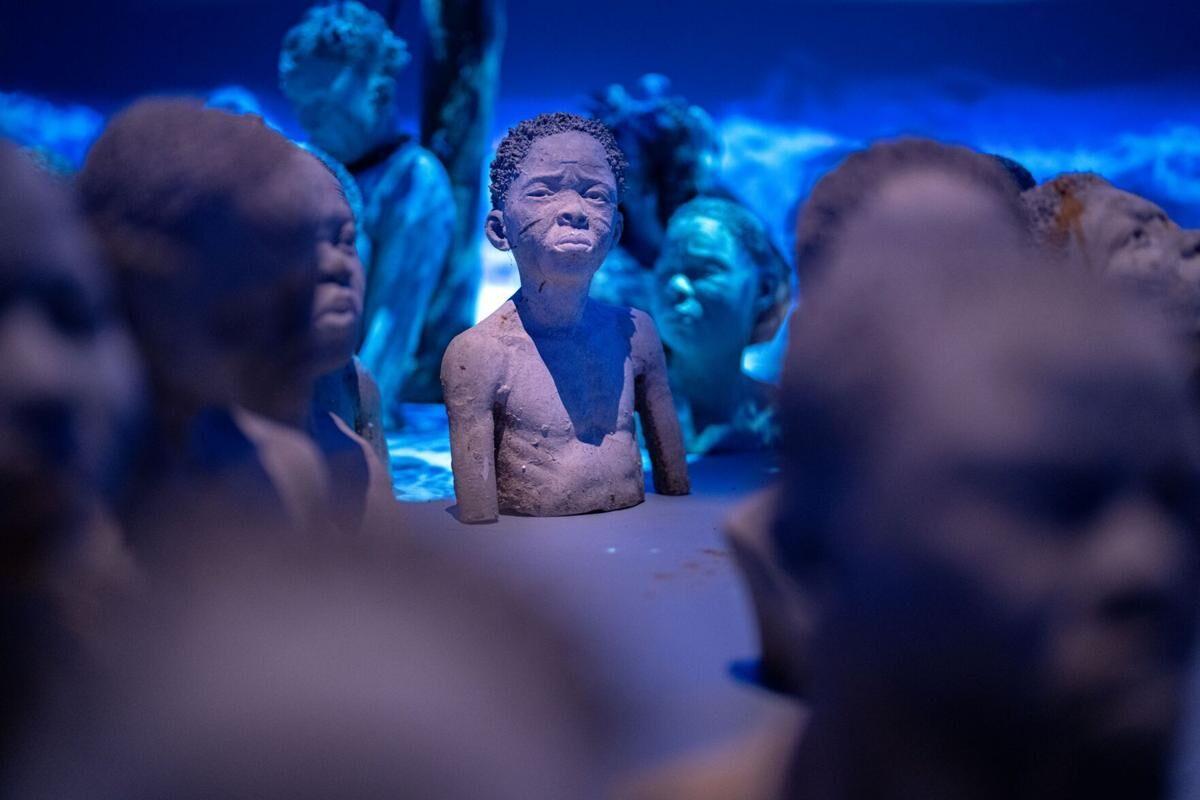 Hundreds of faux bodies depict the 2 million slaves who were buried at sea during the journey from Africa to North America. 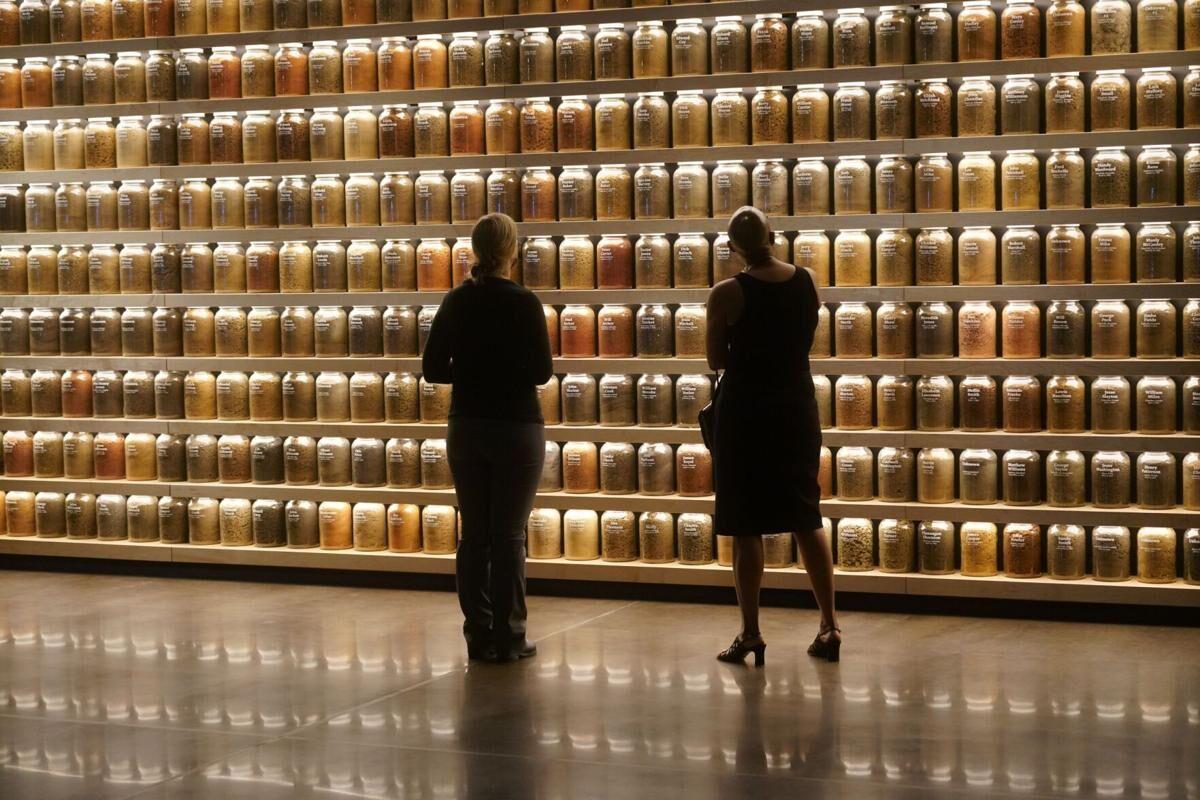 The museum holds jars of sand collected from areas where lynchings of Black victims took place in the U.S. 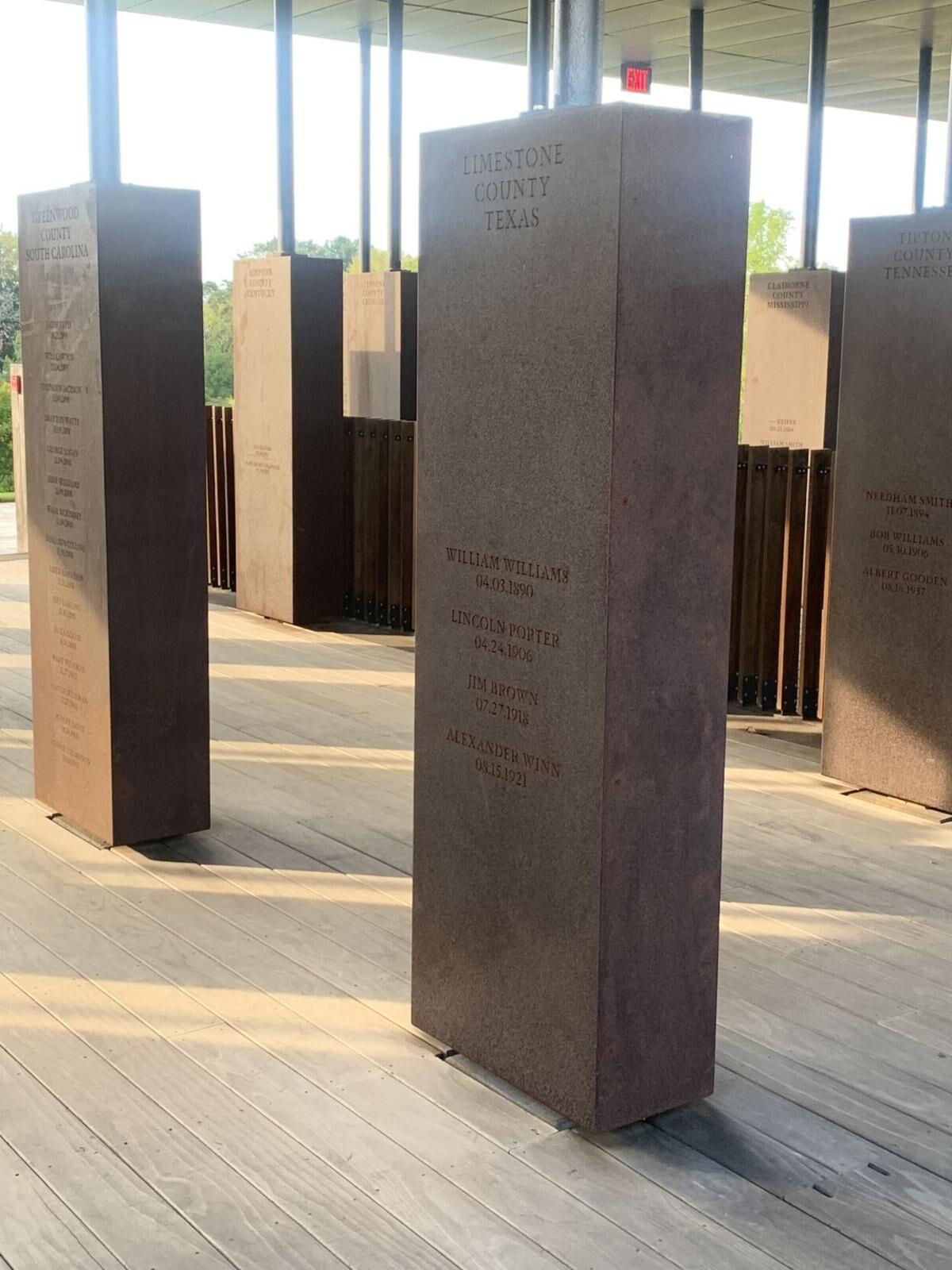 Coffin-shaped columns at the National Memorial for Peace and Justice in Montgomery, Ala., are engraved with the names of the estimated 4,400 Black lynching victims in the U.S. CNHI News | Asia Ashley 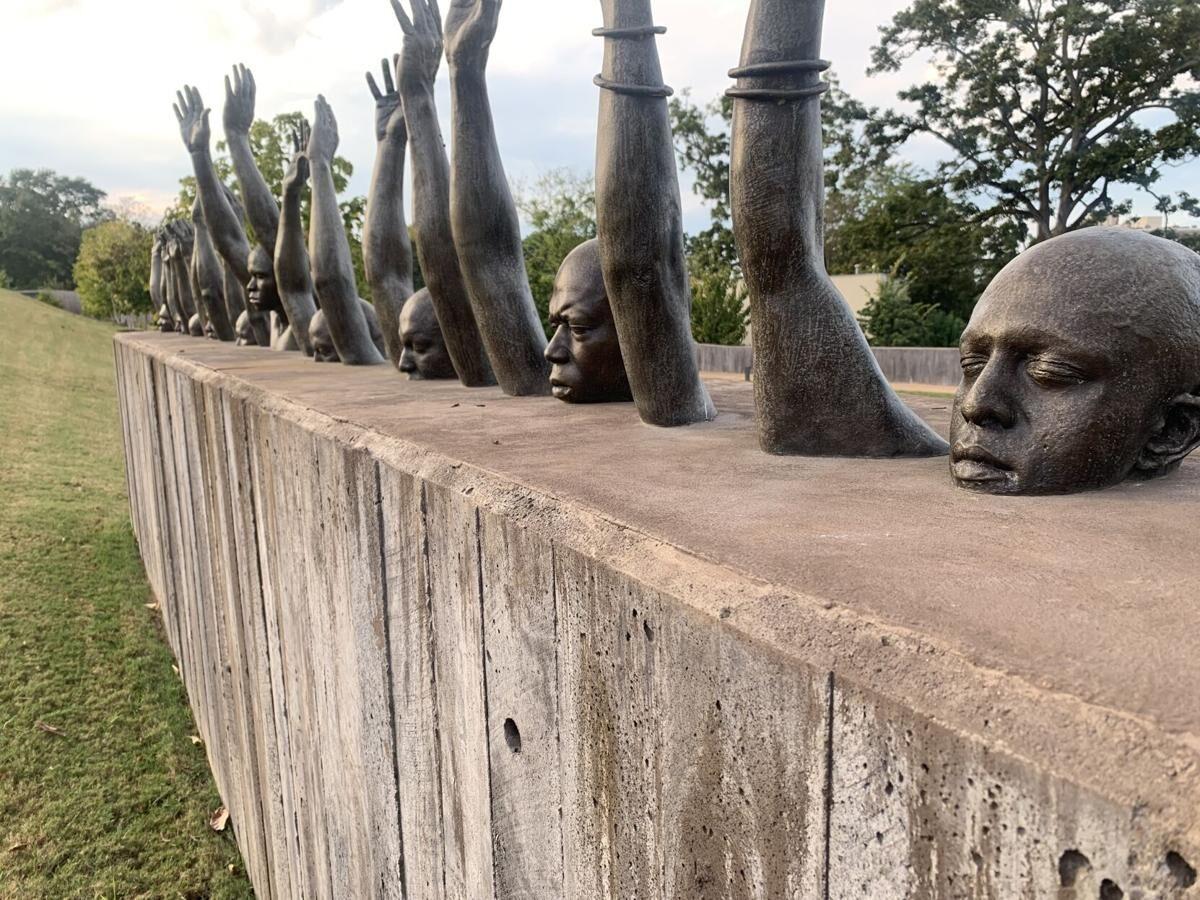 The National Memorial for Peace and Justice pays tribute to the estimated 4,400 Black lynching victims in the U.S. CNHI News | Asia Ashley 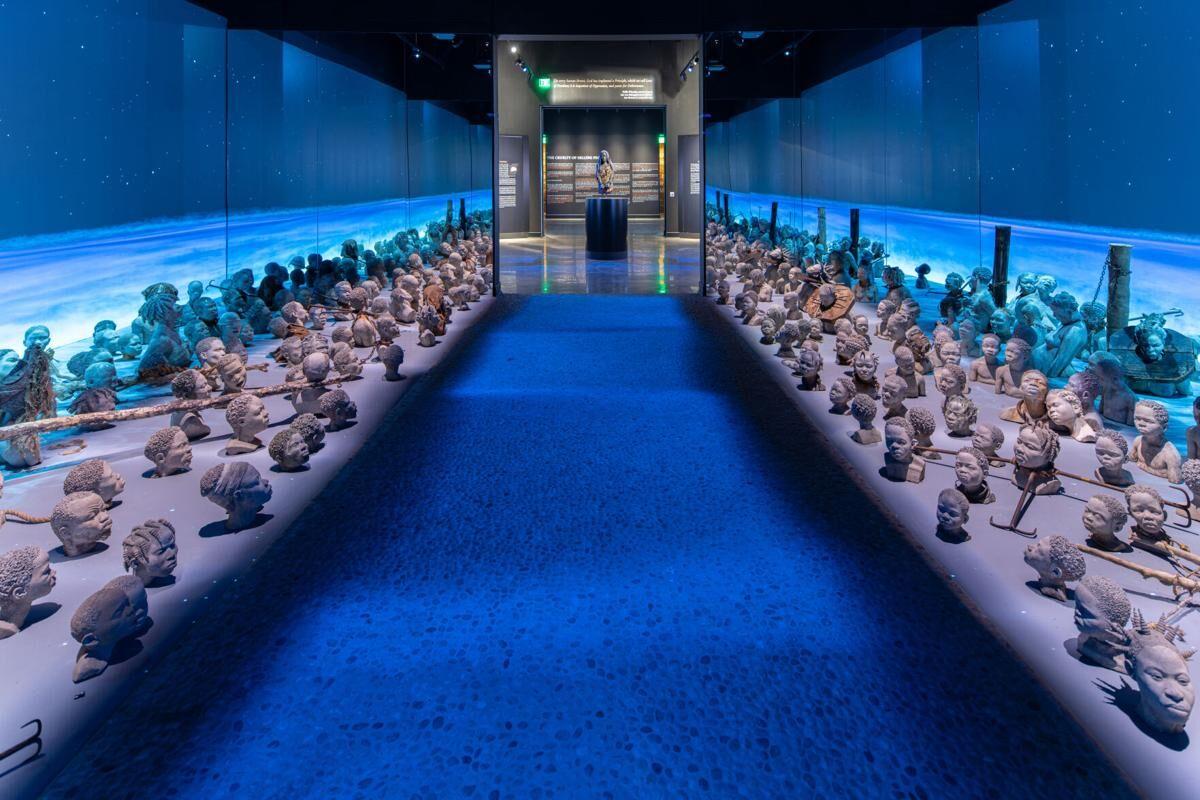 Hundreds of faux bodies against a simulated ocean backdrop depict the 2 million slaves who died at sea during the journey from Africa to North America. 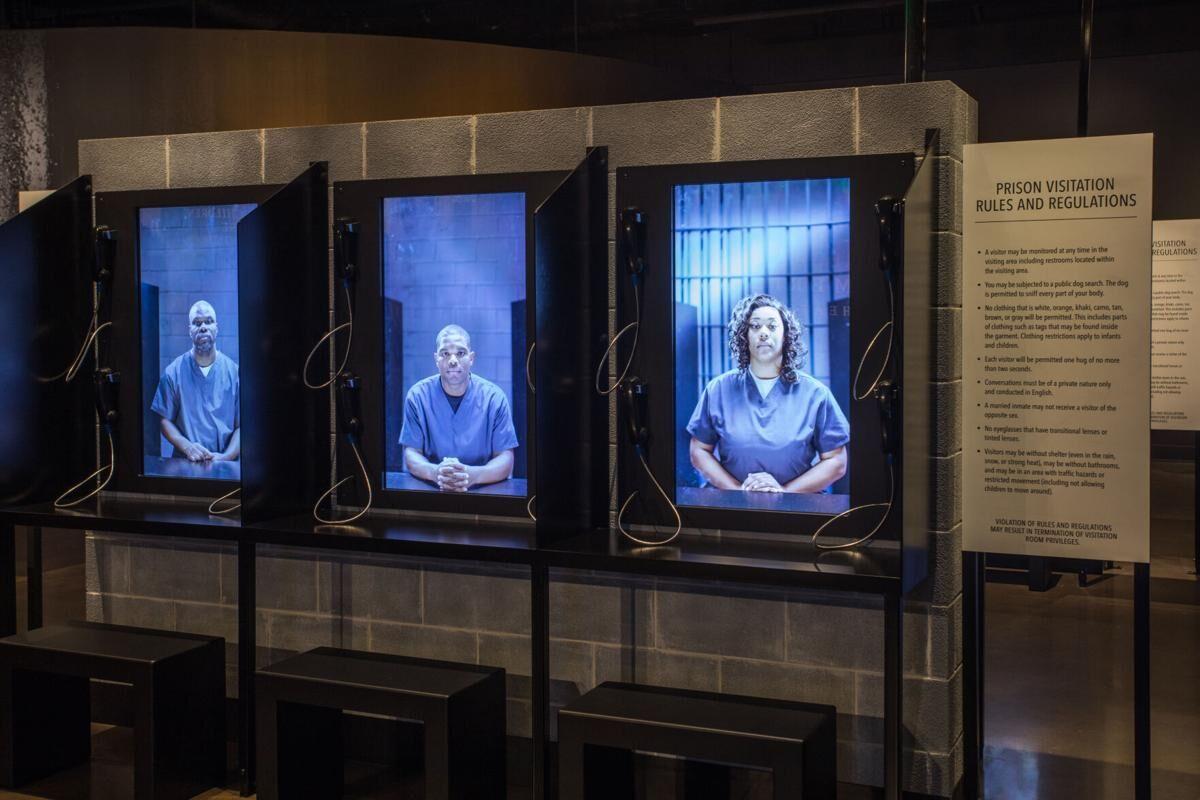 An exhibit of visitation booths allows visitors to pick up a phone and hear the stories of current or former Black inmates. Courtesy | Equal Justice Initiative

Hundreds of faux bodies depict the 2 million slaves who were buried at sea during the journey from Africa to North America.

The museum holds jars of sand collected from areas where lynchings of Black victims took place in the U.S.

Coffin-shaped columns at the National Memorial for Peace and Justice in Montgomery, Ala., are engraved with the names of the estimated 4,400 Black lynching victims in the U.S. CNHI News | Asia Ashley

MONTGOMERY, Ala. — In an era where the nation struggles with racial justice, the newly expanded Legacy Museum in Montgomery seeks equality for all Americans.

Through first-person narratives, films, 3D images and other forms of storytelling, the Legacy Museum’s “From Enslavement to Mass Incarceration” installation provides an in-depth look into the legacy of slavery, starting from the trans-Atlantic slave trade to current issues Black Americans face.

“We need to reckon with and acknowledge that history,” said Bryan Stevenson, executive director of the Equal Justice Initiative, which oversees the museum. “I believe there’s something better waiting for us that feels more like freedom, that feels more like equality is waiting for us. and for us to get there, we’re going to have to talk about the challenges that we face.”

Montgomery, a central location in the slave trade and the civil rights movement in the U.S., was a fitting site for the museum, which is now housed at the site of a former cotton plantation where enslaved people were forced into labor. Stevenson, an attorney who focuses on representing those who are on death row or who are wrongly convicted and unfairly sentenced, moved to Montgomery in the 1980s, launching his interest in starting the museum.

“At that time, there were 59 markers and memorials to the Confederacy, but you couldn’t find the word ‘slave,’ ‘slavery’ or ‘enslavement’ anywhere in this city. We romanticized the architects of slavery, but we did not acknowledge the brutality of enslavement,” he said, adding: “Because we haven’t done that here, we are sitting in a space where the landscape is literally an iconography of the Confederacy, where we have not honestly confronted some of this history. I think that makes us vulnerable to bigotry, antisemitism (and) racist behavior, and to overcome that, we need to engage in this reckoning.”

The Legacy Museum opened in 2018 accompanied by the National Memorial for Peace and Justice, a site dedicated to victims of lynchings in the U.S. The expanded Legacy Museum is 40,000 square feet, four times the size of the former location.

“The old museum was at capacity most of the time, and (many topics) hadn’t been addressed,” Stevenson said. “There was more to the story.”

Some of the key displays in the new museum are:

Visitors are met with screens describing the deadly ocean journey of more than 12 million Black people kidnapped from Africa. Hundreds of faux sanded bodies with a large-screened ocean backdrop depicts the 2 million slaves who were buried at sea during the journey.

“I think the power and legacy of that journey hasn’t really been addressed,” Stevenson said. “The loss that that journey created for millions of Black people, we haven’t reckoned with the tragedy of that horrific experience. I really wanted to engage people’s minds and heart (with that exhibit). I wanted to dramatize kidnapping and them being disconnected from their identities.”

Holograms of enslaved women, men and children locked in cells can be seen in the exhibits, which elaborate on the roles cities and states played in the domestic slave trade, shaping the economy of the U.S.

• Violence and Reconstruction. Visitors can learn about Black experiences after the Civil War, including the domestic terrorism Black people faced in their fight for civil rights. They were often met with unparalleled violence, with no protection from governing and policing authorities, the museum shows.

The lynching exhibit also contextualizes the role of the media, as lynchings were public knowledge and often printed in newspapers. Copies of some of those newspapers are displayed. The final words of some victims can be seen, some of them refusing to admit any wrongdoing before their deaths.

“The conviction to risk your life to advance justice that flows through this entire space — that’s what I find the most moving,” Stevenson said. “(They) held on to their integrity and dignity, even though it cost them their life.”

• Segregation and discrimination. The museum details the Montgomery bus boycott and other civil rights protests and movements, noting the role of judges, governors and senators in trying to maintain segregation and white supremacy.

Forty-one states made it illegal for interracial white and Black marriages; in 2000, Alabama became the last state to allow interracial marriage.

“This says something really important about how entrenched this narrative of racial difference was,” Stevenson said.

Museum guests can participate in a simulation of filling out a sample voter registration form containing questions that Black people were required to answer in order to vote. Some questions included guessing the number of jelly beans in a jar on display and knowing how many bubbles are in a bar of soap.

“White people who were illiterate could vote, while Black people had to take these so-called literacy tests,” Stevenson said. “They were more than tests on literacy; they posed questions that were unanswerable, and that just reveals the commitment people had on maintaining disenfranchisement of African American communities.”

• Mass incarceration. The museum shows how today’s criminal justice system is rooted in the country’s history of racial injustice.

The legal system was used as tool to suppress the civil rights movement, with more than 3,000 people arrested for sit-ins or protests by 1961. That and the war on drugs in the ’80s and ’90s, among other issues, has led to current struggles of mass incarceration.

The museum attributes the era of racial terror and the mass incarceration of Black people to the racialization of criminality.

Heart-wrenching letters from former and current Black inmates serving life sentences for drug-related crimes, or wrongly convicted and incarcerated children, are featured in the museum. Model visitation booths allow museum visitors to pick up a phone and hear the stories of current or former inmate.

“Our clients had hope and courage to educate people despite the harm they’ve suffered as the result of wrongful convictions,” Stevenson said. “To create a first-person museum where you get to hear the actual words of enslaved people, people facing lynchings, people who dealt with segregation, people who have been incarcerated — those are really important because I don’t think that anybody can be more persuasive about the harm of injustice than the people directly impacted.”

The self-guided museum tour concludes with a large reflection room with music and pictures of activists who risked their lives for Black civil rights.

Stevenson said he wants people to leave the museum encouraged and inspired, and he hopes the experience will go a long way toward eliminating distorted and inaccurate views of Black people.

“We as a community and nation have a role to play. I think most Germans who are not Jewish will tell you that they are at a better place by reckoning honestly with the legacy of the Holocaust,” Stevenson said. “I want all Americans to be able to have pride in their community, uncompromised by the dirty secret that we don’t talk about, which is the lynchings, enslavement or segregation. When we commit to that different future, we can all be truly connected and truly joined in kind of a new vision of what it means to be a citizen.”

The new museum opened Oct. 1. Admission to both the National Memorial for Peace and Justice and the Legacy Museum is $5. Both are open from 9 a.m. to 5 p.m. Wednesday through Sunday.