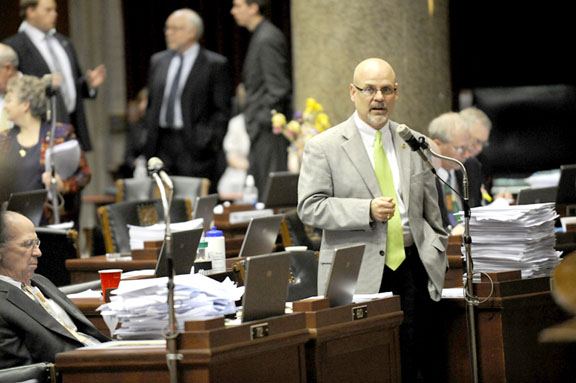 Rep. Kevin Wilson speaks in support of the ethics bill regarding public officials during the last legislative session on May 14, 2010. 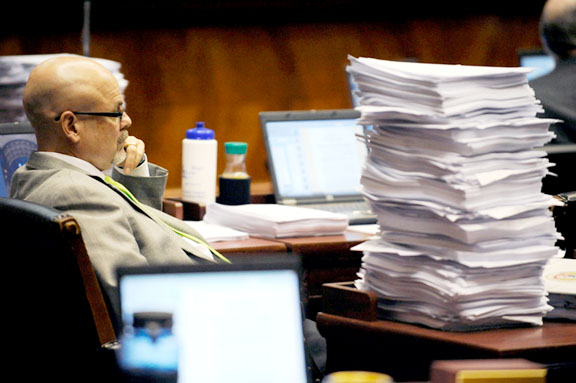 Rep. Kevin Wilson listens to discussion on the public officials bill dealing with ethics and the cap on campaign contributions during the last legislative session of the term on May 14, 2010. 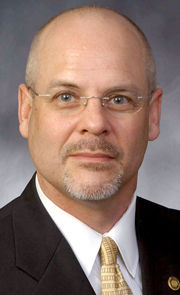 Rep. Kevin Wilson speaks in support of the ethics bill regarding public officials during the last legislative session on May 14, 2010.

Rep. Kevin Wilson listens to discussion on the public officials bill dealing with ethics and the cap on campaign contributions during the last legislative session of the term on May 14, 2010.

NEOSHO, Mo. — While Kevin Wilson was remembered for being an outstanding listener, he didn’t always follow advice he heard — such as how much oil to use when cooking funnel cakes.

Wilson, a former state representative and community leader, died Tuesday at 62 after a multiyear battle with cancer. He was remembered by community members as someone who loved to serve the Neosho area and an attentive representative who put a lot of effort into listening to others before making decisions about his votes.

Padgett, president of K&S Wire Products, first met Wilson in his post as the state representative for the district that included Neosho. Wilson would approach various people around town with different projects and ask them how they felt, he said.

“He was always looking for others’ opinions as a state representative so that he could carry out what his constituents wanted,” Padgett said. “He listened to both sides and reached a good conclusion. That’s the way a rep should work.”

He returned to Neosho in 1985 and worked for several companies and organizations over the next 36 years. They included Teledyne, the Joplin School District, La-Z-Boy Midwest, Cardinal Scales and Moark Industries.

In 2002, Wilson was elected to his first term in the Missouri House, alongside several other freshmen legislators from that year. Former state Sen. Ron Richard, of Joplin, who served as the speaker of the Missouri House before being elected to the Senate, was one of those freshmen in 2002.

Richard said Wilson’s career experience and background gave him reliability and diplomacy that many others appreciated. Wilson was the engine that drove ethics legislation during his time in the House, Richard said.

When Richard became speaker, he appointed Wilson to seven committees and involved him as part of a group of advisers that would sound out agenda items. Richard appreciated Wilson’s businesslike approach of trying to get compromises between factions.

“(Wilson) was more unflappable,” Richard said. “He didn’t lose his temper. He worked through issues without getting complicated in personalities. That was a great trait of his.”

Once Wilson reached his limit for consecutive terms, he backed away and focused on running a consultancy enterprise and further community service. Over time, he served on several boards and organizations, including the Neosho School Board, the Crowder College Foundation and the board of directors for the Christopher Foundation.

Padgett said that when he joined the Neosho Exchange Club, he had no idea Wilson was also a member. Wilson was a crucial part of that group’s activities, including most recently expanding the Patriots Memorial around a large flagpole at highways 59 and 60.

But a large part of Wilson’s community service was represented by little things that meant the world to only a few. Padgett said an example of that was how Wilson rallied some help to clear trees from the property of an older woman who was unable to afford the cost.

“He just wanted to help people because he loved doing it,” Padgett said. “I think he would have given you his last dollar if he thought you needed it more than him.”

Wilson was awarded the club’s Book of Golden Deeds because of his efforts, Padgett said.

He was a member of Neosho First Baptist Church, Padgett said, and was all about his family and faith.

A visitation will be held from 5 to 7 p.m. Friday at Clark Funeral Home in Neosho. Services will be at 11 a.m. Saturday at Neosho First Baptist Church; military honors will follow at the Neosho IOOF Cemetery.

This report has been edited to correct the number of a legislative district.