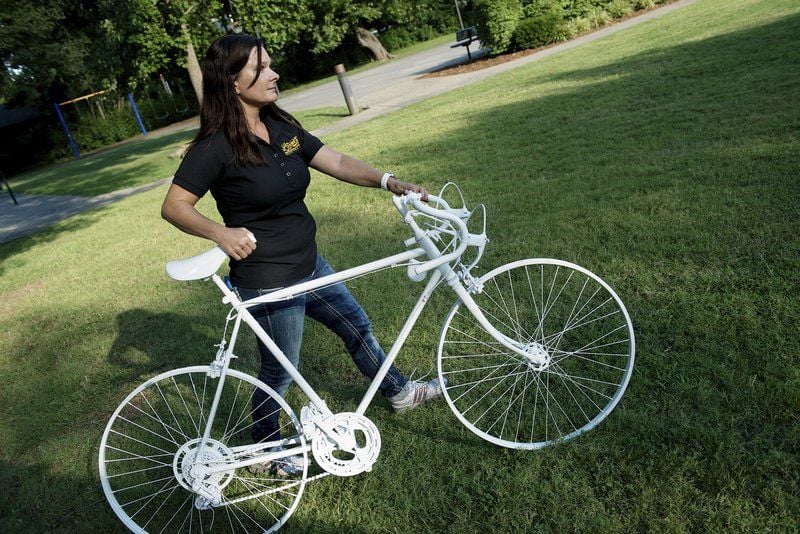 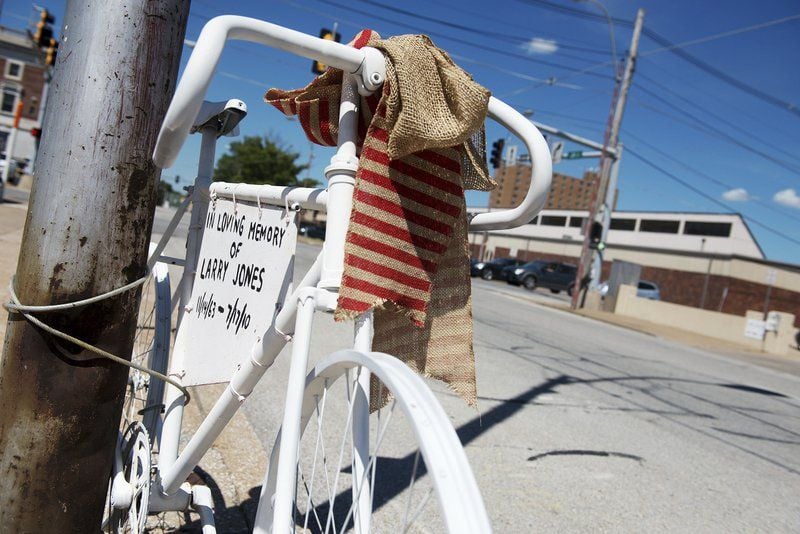 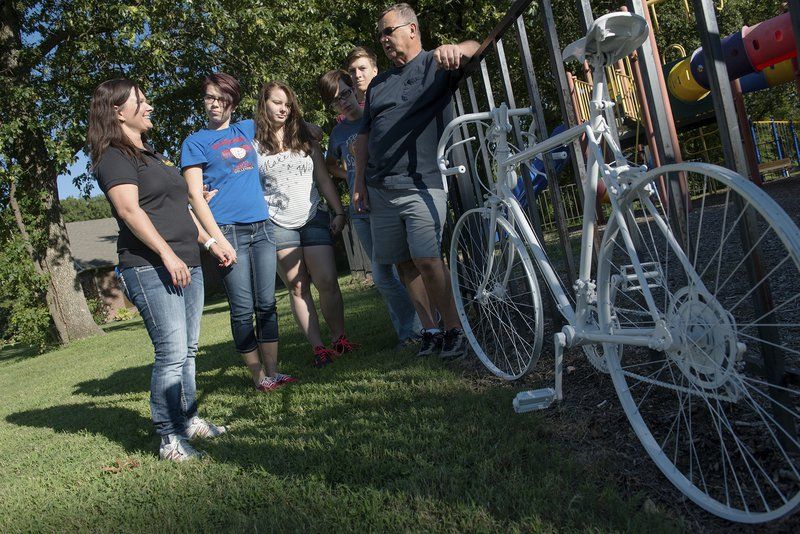 Globe/Roger Nomer Rhonda Thompson talks with (from left) Alyssa Rosete, Genesis Korte, Stormi and Romiro Rosete and Robert Thompson about a ghost bike dedicated to their late grandmother and wife at Lefler Park on Wednesday. 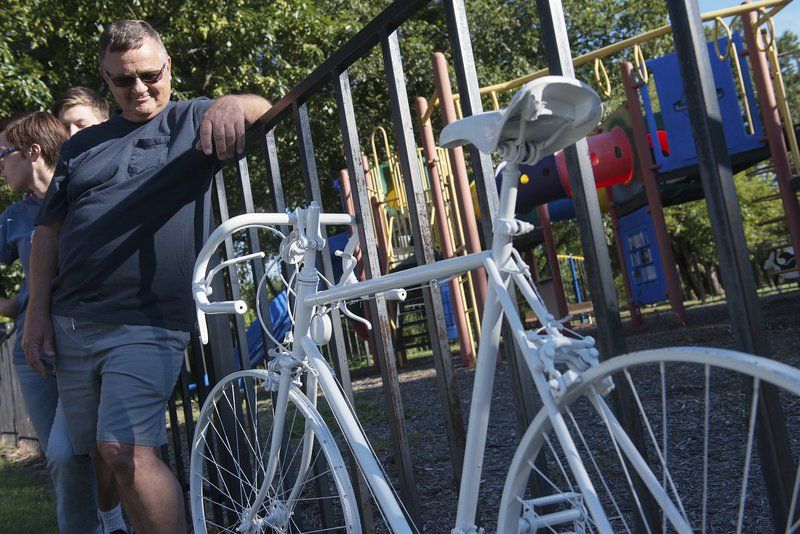 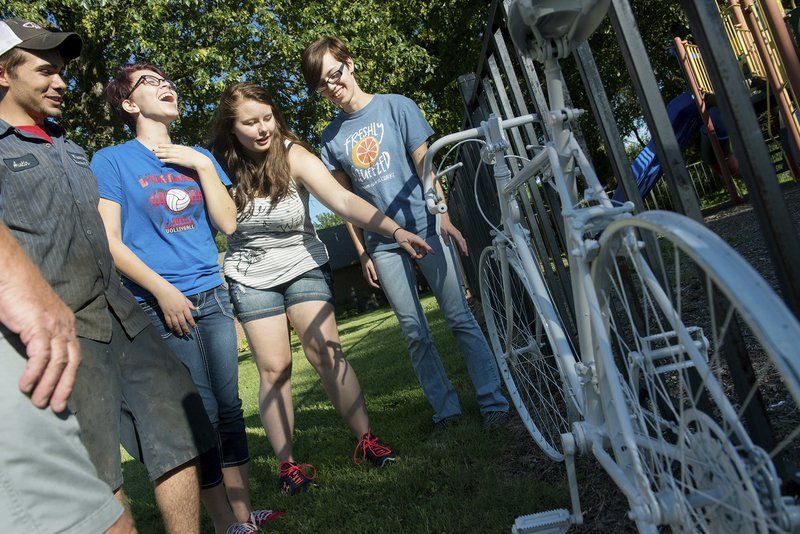 Globe/Roger Nomer Rhonda Thompson talks with (from left) Alyssa Rosete, Genesis Korte, Stormi and Romiro Rosete and Robert Thompson about a ghost bike dedicated to their late grandmother and wife at Lefler Park on Wednesday.

Rhonda Thompson, 59, left her Pittsburg, Kansas, home on her road bike in the early morning hours of Aug. 31, 2014. She never came back.

Both were struck by vehicles and killed.

Today, a “ghost bike” — painted entirely white and stripped of its parts — honors Jones and serves as a reminder to passing motorists. A ghost bike honoring Thompson will be the next to be dedicated during a ceremony in Pittsburg on Aug. 30.

“They’re meant to get people to be aware, to be alert, to pay attention,” said LOOK 4-States spokesperson Rhonda Thompson — a cyclist by the same name as the one who was killed, but who is no relation.

The ghost bike movement started in St. Louis in 2003 in an attempt to turn those numbers around. When Patrick Van Der Tuin saw a motorist strike a bicyclist in a bike lane, he placed a ghost bike on that spot with a hand-painted sign reading, “Cyclist Struck Here.”

He then enlisted the help of friends to place 15 more ghost bikes in other areas in the city where cyclists had been hit. Similar projects took hold in Pittsburgh, Pennsylvania, in 2004, in New York City and Seattle in 2005, and in Albuquerque and Toronto in 2006.

In 2008, a ghost bike in Washington, D.C., commemorating a rider killed by a garbage truck was removed after one year by city employees; the rider’s friends replaced it with 22 ghost bikes.

Since 1991, more than 70 cyclists have been killed on Kansas City metro roads, according to the Kansas City Metro Bicycle Club. The Greater Kansas City Bicycle Federation has begun erecting ghost bikes in their honor. The group also began a “Caution Orange Bike” project, in which bikes are installed at locations where riders were injured.

Today, there are more than 630 known ghost bikes around the world, according to the registry at www.ghostbike.org.

“My husband travels and he sees them all over the place,” said Rhonda Thompson with LOOK 4-States. “We decided to start doing it in this area because we have had a dramatic growth in cyclists in this area and with that we’re seeing an increase in accidents and deaths.”

“I can count in my little family about 75 people’s lives that have been directly impacted by Rhonda’s death,” he said. “That doesn’t include her work family, friends, our church family. Counting those it’s hundreds impacted by that one poor decision of not allowing room enough or being aware or paying attention.”

On July 17, LOOK 4-States installed its first ghost bike at the corner of Fourth and Joplin streets in Joplin in honor of Jones, who was killed while training for an upcoming MS 150 ride. That date marked the fifth anniversary of his death.

Within one week of Jones’ death, fellow cyclist Mark Morris was riding in Jones’ honor and was hit on Missouri Highway 43 between Joplin and Seneca, leaving Morris with severe injuries.

It was following those two incidents that Ruth Sawkins, founder of Joplin-based Rufus Racing, started the "LOOK" campaign to raise awareness for cyclists, runners and pedestrians through the creation of billboards and public service announcements.

LOOK 4-States is a continuation of that initial campaign.

At 2 p.m. on Aug. 30, the group will formally dedicate its second ghost bike in honor of Rhonda Thompson at Lefler Rotary Park at Fourth and Chestnut streets in Pittsburg.

LOOK 4-States spokeswoman Rhonda Thompson said she believes the ghost bikes impress upon passing motorists that each cyclist is a person.

“People can drive by and see it, and it humanizes cyclists out there," she said. "This is a person — someone’s mom, brother, sister — and hopefully people will be aware of that as they drive along, maybe slow down, move over, use caution."

The deceased cyclist Thompson planned to ride in at least part of the MS 150 on Sept. 6, 2014, from Clever to Joplin — a milestone in her refusal to lose her own personal fight against multiple sclerosis. She was training for the ride on 260th Street near Opolis, Kansas, when she was struck from behind by Danielle Kaye Drake, 27, of Joplin, just before 8 a.m., according to Trooper Rick Wingate of the Kansas Highway Patrol.

At the time, she was the seventh cyclist to die on Kansas roads in 2014.

Thompson's daughter, Amy Thompson Rosete, said she was once guilty of not paying attention to the road when driving.

“I would glance down to scroll through my phone to find a song,” she said. “I would cuss the cyclist I couldn’t pass and get around.

“And then that happened to Mom. I’ve learned a lot.”

Rosete said she is “100 percent in support of” the ghost bike project, in hopes that it raises the awareness of both cyclists and drivers.

“If it causes even just one person to ask, ‘What’s that? Who is it for?' then we’ve achieved the goal,” she said. “Because then it might keep one less family from having to go through what our family has gone through.”

“We said we’d love it,” he said when LOOK 4-States approached them about a bike in his wife’s honor.

“But as you can imagine, it’s a mixed kind of situation — both ‘yay’ and ‘damn it.’ It’s something I’m proud to have Rhonda’s name attached to, but it’s also something I wish her name didn’t have to be on.

“There has been a lot of sorrow, loss, and it’s hard to find growth and opportunity some days. My daughter and I have become much closer out of necessity and wanting to hang onto each other and heal a little bit, and my son, too, but the sadness is still there,” Thompson said.

“It’s not as in-your-face as it was, at first. But for me, I’ve got this big old house I’m knocking around in, and there are always reminders of what her and I were going to do.”

The ghost bike to be dedicated for Thompson was prepared at no cost by McAlister’s Body Shop in Webb City. The shop donated all the materials and labor, including sandblasting it and painting it white. It will be chained to a post and will include photos of Rhonda Thompson and a small plaque with her name and the date of her death.

Area cyclists will ride to the dedication, which will include brief statements by members of LOOK 4-States and Thompson’s family. A remembrance ride afterward is planned to the site where Thompson was hit.

“Anything we can do to get the public’s attention to try to be aware of cyclists is a good thing,” her husband said. “If I had something to say to folks, I would challenge them to have a conversation with themselves. What are you going to do the next time you see somebody riding a bicycle, jogging or walking on the road and you’re 500 feet away? Have that conversation before you get 500 feet away and you’re going 55 miles per hour.”

According to www.ghostbikes.org, ghost bikes have been dedicated in 28 countries. Among the cyclists killed this summer were Glenda Taylor, 60, who was hit by a truck while warming up for the Kansas State Time Trial Championships in Crawford County, Kansas, and Patrick Wanninkhof, 25, who was bicycling across America to raise money for affordable housing and was hit by a car in western Oklahoma last week.