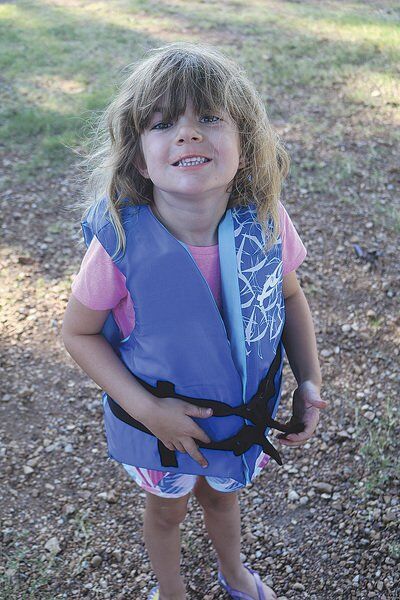 Five-year-old Rori Jeffcoat smiles as she shoes off her life jacket, during her first trip to the Bernice State Park campground on Grand Lake in Oklahoma. Globe|Kaylea M. Hutson-Miller 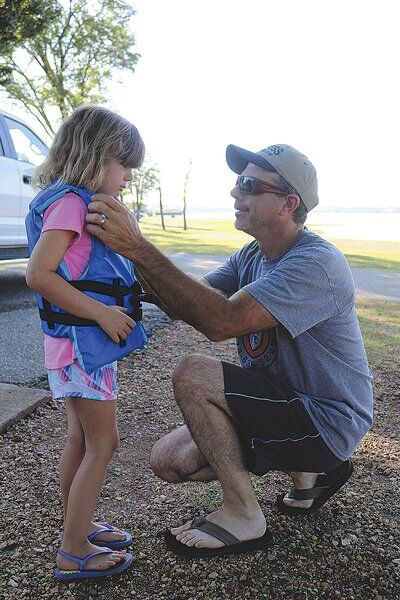 Mike Jeffcoat puts a life jacket onto his granddaughter, 5-year-old Rori Jeffcoat, during her first trip to the Bernice State Park campground on Grand Lake in Oklahoma. Globe|Kaylea M. Hutson-Miller

Five-year-old Rori Jeffcoat smiles as she shoes off her life jacket, during her first trip to the Bernice State Park campground on Grand Lake in Oklahoma. Globe|Kaylea M. Hutson-Miller

Mike Jeffcoat puts a life jacket onto his granddaughter, 5-year-old Rori Jeffcoat, during her first trip to the Bernice State Park campground on Grand Lake in Oklahoma. Globe|Kaylea M. Hutson-Miller

GROVE, Okla. — The drowning death of "Glee" star Naya Rivera in mid-July while swimming in a lake with her 4-year-old son, Josey, serves as a tragic reminder for all who venture out on area waterways: Life jackets can save lives.

It’s a reminder Ed Ferguson, community relations officer with the Grand River Dam Authority on Grand Lake, knows all too well — both personally and professionally.

Earlier this month, a 65-year-old man drowned at Fort Gibson Lake near Sequoyah State Park in Oklahoma after he jumped from his boat to go swimming.

Reports say the man, who was not wearing a life jacket, began to struggle immediately. While people were able to get him back to the boat, he died an hour later.

In Ferguson’s case, he was wearing a life jacket when he found himself experiencing serious leg cramps while swimming alongside his boat during a family outing.

“I didn’t drink enough water while I was on the boat and started experiencing the side effects,” Ferguson said. “I was unable to physically pull myself onto the boat.”

Wearing a life jacket, he said, helped him relax and float until he could recover enough to get back on board the boat.

“I know there’s a lot of excuses (for not wearing them),” Ferguson said. “But the reality, with all of our tools and technology, life jackets are comfortable. It’s a matter of investing in and buying a personal flotation device.”

Gone are the days, he said, when people needed to rely on the orange “horse collar” life jackets. Newer life jackets include features such as carbon dioxide cartridges that expand either manually when the user pulls a cord or automatically when the water sensor is triggered.

Some people such as kayakers, he continued, prefer a belt-style flotation device.

“There’s an expense in purchasing the type of life jackets people actually wear,” Ferguson said. “But they can save lives.”

“It’s like a seat belt,” Ferguson said. “If you are in a moving boat and strike an object or another vessel, you don’t have time to put on let alone grab a life jacket.”

Ferguson said he recommends everyone wear a life jacket while swimming.

Published reports from Ventura County Sheriff Bill Ayub indicate Rivera’s 4-year-old son Josey wore a life jacket during their outing, but his mother did not.

Josey told police his mother "boosted him onto the deck of their rental boat from behind" before he "saw her disappear under the surface of the water."

Ayub was quoted as saying Rivera "must have mustered enough energy to get her son back on the boat but not enough to save herself."

Ferguson said adults often overestimate their swimming abilities in settings outside of the controlled environment found in a pool.

Shorelines, where people often wade, are also tricky, Ferguson said, because water can go from shallow to deep in an instant.

He recalls an incident from a few summers ago when a teen drowned while walking along a 3-foot-deep shoreline at Lake Hudson. The teen died when he fell in a 6-foot hole without warning.

“The rule of thumb in open water: If you can’t see your toes, you need a life jacket,” Ferguson said.

“You can get exhausted swimming and often hyperventilate from the different waves and wakes,” Ferguson said. “The wave actions and currents make it difficult to float in open water and also to gauge distances.”

Ferguson said it’s important to purchase a life jacket that is snug as well as U.S. Coast Guard approved.

“Don’t buy it big like clothing,” he said. “You need to buy the correct size, based upon the weight of (the person) listed on the label.”

Life jackets, he said, are also rated for specific speeds. It’s important to buy a jacket designed for the maximum speed it will be used under because it indicates the type of impact it can withstand.

For children as well as adults, make sure the life jacket properly adjusts to the person wearing it — with all zippers, snaps, belts functioning.

“We say it needs to be snug as a hug,” Ferguson said, adding a parent should have the child put the jacket on, and then try to pull it from the shoulders while the child is raising their arms above their head.

“If you can pull the top straps and it comes up past their ears, you need to get a smaller size,” Ferguson said.

He also suggests parents take their children out along the shoreline, where they can float in open water, to see how the jacket reacts and to ensure a proper fit.

“It needs to be designed to use in open water and be at least a Type II or III,” Ferguson said.

Ultimately, Ferguson said, boaters and swimmers alike need to be prepared for the worst every time they go out on the water.

“The human body is not designed to survive under water,” Ferguson said. “If you take time, regardless of what happens, to wear a life jacket, it can keep your head above water. Life jackets increase your chance of surviving. If you don’t have one that’s comfortable enough to commit to wearing it, go find one that is.”

• Kansas: Boaters must have at least one life jacket per person on board. However, the law raises the age requirement, stating all children 12 and younger are required to wear a life jacket while aboard a vessel.