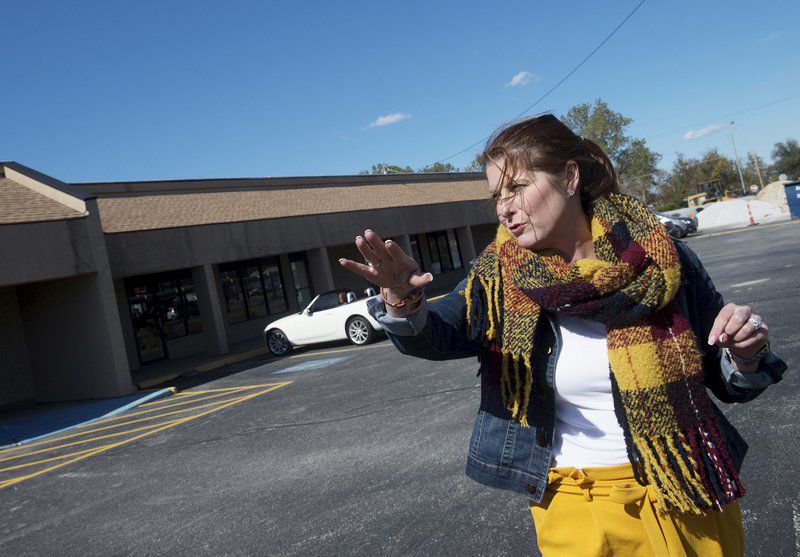 Christine Pennington, with the Arkansas-based Newmark Moses Tucker Partners, property manager of Creekside Plaza, on Tuesday talks about the vision for the former Sears Plaza at Seventh Street and Illinois Avenue. The redevelopment idea would dovetail with the city of Joplin's current stormwater project under Seventh Street.GLOBE | ROGER NOMER 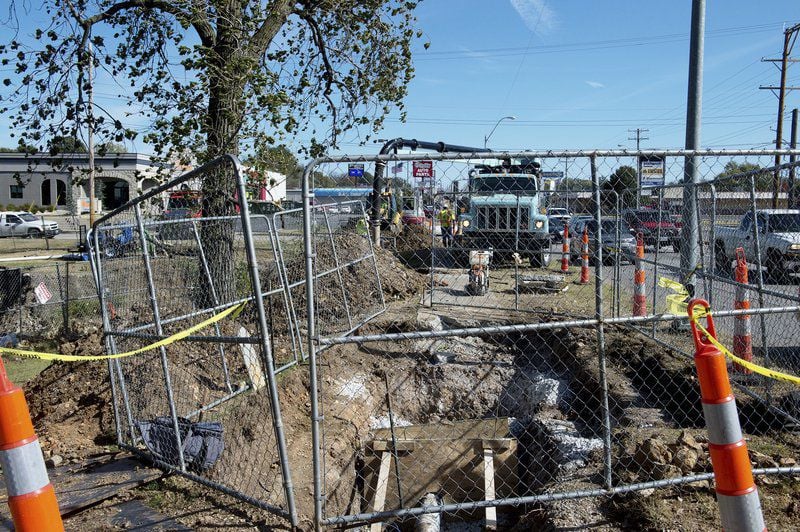 Construction continues on the city's project to increase the capacity of the stormwater culverts that carry Joplin Creek under Seventh Street near Illinois Avenue. The main purpose of the work is flood prevention. But the project also will add a pedestrian and bicycle passageway underneath the busy Seventh Street.GLOBE | ROGER NOMER

Christine Pennington, with the Arkansas-based Newmark Moses Tucker Partners, property manager of Creekside Plaza, on Tuesday talks about the vision for the former Sears Plaza at Seventh Street and Illinois Avenue. The redevelopment idea would dovetail with the city of Joplin's current stormwater project under Seventh Street.GLOBE | ROGER NOMER

Construction continues on the city's project to increase the capacity of the stormwater culverts that carry Joplin Creek under Seventh Street near Illinois Avenue. The main purpose of the work is flood prevention. But the project also will add a pedestrian and bicycle passageway underneath the busy Seventh Street.GLOBE | ROGER NOMER

If everything envisioned falls into place over the next few years, the former Sears Plaza will transform into a riverwalk, a “destination hub” built around Joplin Creek. When completed, it will mirror similar areas found in Northwest Arkansas communities such as Bentonville and Springdale.

During the annual Joplin Area Chamber of Commerce’s economic growth tour on Oct. 18, plans for an extensive redo of the shopping center, located at Seventh Street and Illinois Avenue, were revealed publicly. The shopping center, no matter how much of the vision comes to fruition, has a new name: Creekside Plaza.

Colorful development concepts displayed many of the planned changes proposed to the 20-acre site, including the transformation of the creek that runs through the property into a dedicated water feature, complete with elevated water levels, several docklike patios overhanging the creek’s western edge, and fountains. Other proposed features include pedestrian and bicycle promenades running along the creek’s eastern side, an outdoor ice rink, a small community park, a food truck area and landscaped green spaces replacing much of the existing asphalt parking lot.

Chamber President Toby Teeter envisions Creekside Plaza as serving a far greater purpose for the city down the road. And it all has to do, he said, with connectivity.

When the current work to expand the box culvert beneath Seventh Street is completed next spring, bikers and pedestrians will be able to walk or ride underneath the intersection without having to negotiate heavy car traffic. With Creekside Plaza serving as a “centralized hub,” Teeter said, more than 3.5 miles of city-owned trails will be linked together.

“When you look at a map of Joplin, there’s this clear green corridor that floats right through our city,” Teeter said. “It essentially runs along the Murphy Boulevard corridor.” With Creekside Plaza as its nexus, “there will exist a continuous trail from Landreth Park, south through Ewert Park, underneath Seventh Street, through (the renovated) Creekside, and on down through Campbell Parkway (Murphy Boulevard Park) all the way to 20th Street.

“This means residents from Rosedale neighborhood (central Joplin) to Roanoke neighborhood (northwest Joplin) will be able to bike (or walk) to the center of town.”

When completed, Creekside would become Joplin’s first trail-facing “connectivity destination development,” Teeter said, something that is quite common in other communities.

Something old is new again

The first planned phase for the Creekside renovation project would center on the two primary buildings located on the west side of the creek — the main building that’s home to 16 tenants, including Tropical Tan and Beckett’s Café, as well as the adjacent building that, until late last year, housed Vatterott College Joplin.

Christine Pennington, Creekside Plaza property manager for the Arkansas-based Newmark Moses Tucker Partners, said work would also include the “waterfront” portion of the creek that runs in front of the two buildings, “putting in more greenery to soften the lines” and possibly adding stairsteps down to the water’s edge.

“We want the creek to be a water feature,” she said. “We do not want it, any longer, to be called a drainage ditch.”

The overall goal is to transform the plaza from the vehicle-centric area that it is now to a pedestrian-friendly area.

“The connectivity with the bike path is huge,” she said. “We want people here on bikes, (families) who would rather bike or walk than drive here.”

Later on, as future renovation stages line up, Newmark would aggressively lure new tenants into the existing Creekside buildings, Pennington said, including a possible sit-down restaurant with a dining area overlooking the creek, a brew-pub — Teeter said recently that he’s been contacted by a potential microbrewery suitor — a coffee house, as well as an ice cream parlor near the proposed outdoor skating rink location.

Although the only concrete change so far has been a new name, Creekside Plaza’s Dallas-based owner Mike Muccio said he wants to take a slow, steady and successful approach to the development.

“We are finding out what is possible and what could be possible,” he said during a phone interview. “We want to make sure this is a sustainable project. We want to be very thoughtful of what we’re going to be doing here.”

“I’m real sensitive about not over-promising things,” Muccio continued. “We really do believe all the pieces are in place here.” But he doesn’t want to set timelines, he added, though he hopes work could start “sooner rather than later.” He also doesn't want to slap down temporary "Band-Aids."

“When I talk about this project I get excited," he said. "We do have a lot of pieces just sitting there, waiting for us to do something with it. And certainly, there are dollars needing to be invested and work to be done, but we’re lucky to have key players already involved” — citing Joplin-based CGA Architects and Newmark Moses Tucker Partners, in which the latter has been instrumental in the development of the Bentonville-based Eighth Street Market, a 10-acre food and culture centralized hub that has been a template of sorts for Creekside Plaza.

“Yes, it’s a big vision," he said. "This is something we can definitely make happen. But it’s also not something we’re going to force on anyone.”

Work should be underway within the next 12 to 18 months, Pennington said.

“We are 100% dedicated to do it,” she said. “We’re visiting with banks, looking for the right financing, so we are at that stage. We’re getting bids to see what all of this will cost.

“We want this to happen.”

Right now, crews are toiling away on the city’s storm water project in and around Seventh Street to “dramatically reduce” the flooding that has plagued the shopping center and the adjacent Illinois Avenue for decades.

Dan Johnson, assistant director of public works for engineering, said the project will soon expand the culvert beneath Seventh Street, with the addition of a third “barrel” or tunnel. The work — a $2 million project — is funded through the parks and stormwater sales tax, which Joplin voters renewed in 2011.

The third barrel, to be placed to the east of the two existing barrels, will be deeper than the two existing ones, allowing creek water to flow more swiftly through the area, greatly decreasing the potential for flooding. Additional work would also widen the creek, with much of the excess fill dirt excavated, as well as the placement of a wall of 2,364 concrete blocks along the creek as a flooding preventive measure.

In a dual purpose move, the addition of the third barrel will open an existing 9-foot-high barrel to become a dedicated pathway for bikers, joggers and walkers.

Work to add the new barrel likely will be done this winter, after the holiday shopping rush, because its placement will force the shutdown of Seventh Street. They hope to have everything completed by spring 2020.

Adding a pedestrian link beneath Seventh Street “was something we’ve known about for a while now,” Johnson said. “Any time I see an opportunity to get folks across (a busy street) without having to deal with traffic, I would prefer to do that.

“We’re glad that we’re taking care of this, in particular it’s the flooding on Illinois that’s the big driving factor here, (so) we had to do it. It’s a really good project, and we feel good doing something about it.”

As far as the Creekside Plaza plans are concerned, “We’re excited that the owners are using the creek as a feature instead of a hassle that divides their property,” Johnson said. “Turning it into a feature, appreciating the creek for what it is, we’re very excited about that.”

Creekside Plaza serving as a centralized hub with connections to other Joplin areas, creating fun places for people to visit, is exactly what Teeter is looking to do in Joplin.

Why? Because the role of the chamber, he says, is no longer just about business attraction, but business attraction coupled with talent attraction and retention. It is “points of destination” such as the proposed Creekside Plaza, he said, that will add to the city’s livability standards: diversity inclusion, trails and connections, and health and wellness. Having areas embracing all three is enticing to the 20- to 30-year-old talent chamber officials want to bring to Joplin as future leaders.

“If you look at communities that are winning that game, people in that (20- to 30-year-old) range are flocking to cities that appreciate and champion diversity inclusion, trails and connectivity, and health and wellness,” Teeter said.

He cited Bentonville and Springdale as a prime examples. “You see a systematic approach to common development where they are engineering connectivity — the trail system — but in a strategic way that adds livability, where it’s actually plausible to commute to work … using the trail system.”

Creekside Plaza, with its proposed riverwalk, “is something that would be a destination venue and a key part of Joplin," Teeter said. "And it’s right there. You pass (the former Sears Plaza) every day."

"There is an opportunity here to do something really special."