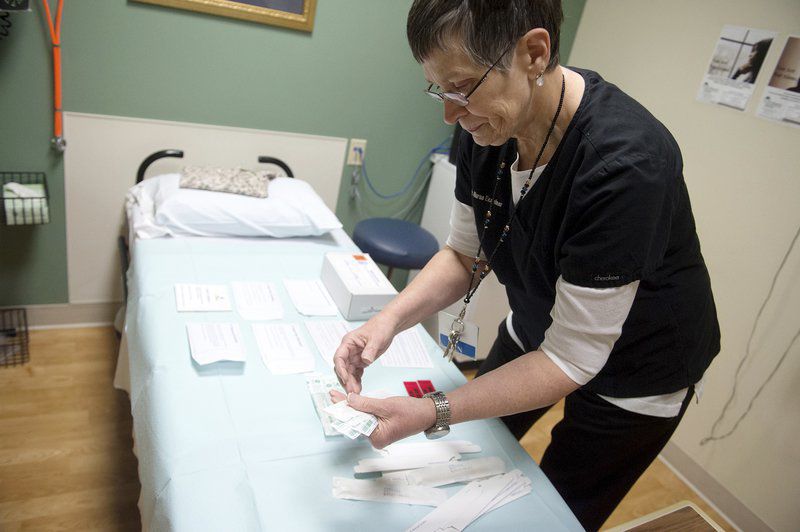 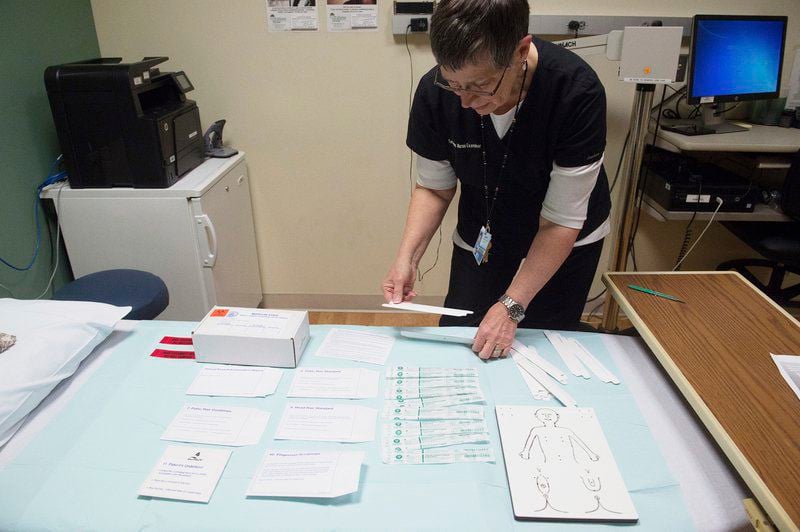 Karen Scott, SANE program coordinator at Freeman Health System, talks about the components of a rape kit on Tuesday at Freeman Hospital. Missouri has a backlog of thousands of untested rape kits that officials say they are committed to processing as soon as time and funding allow.Globe | Roger Nomer 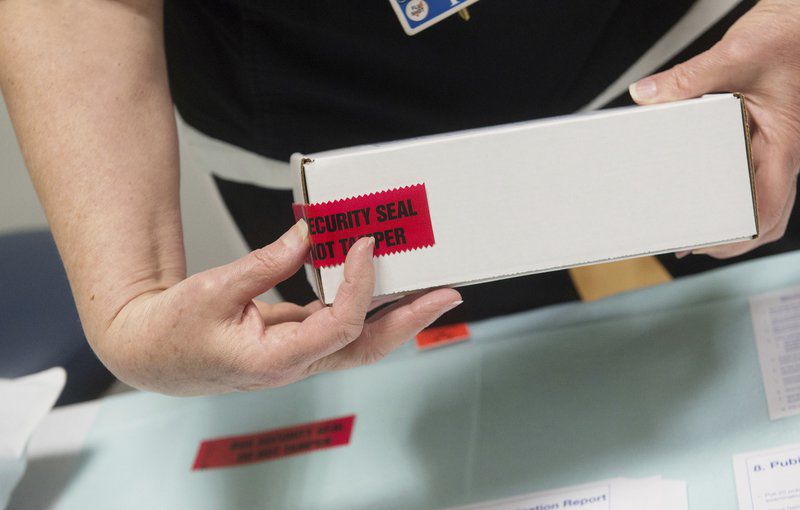 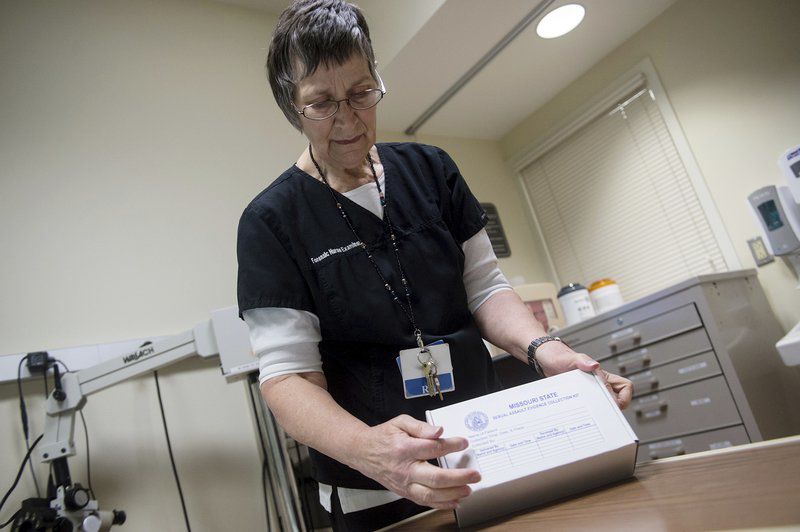 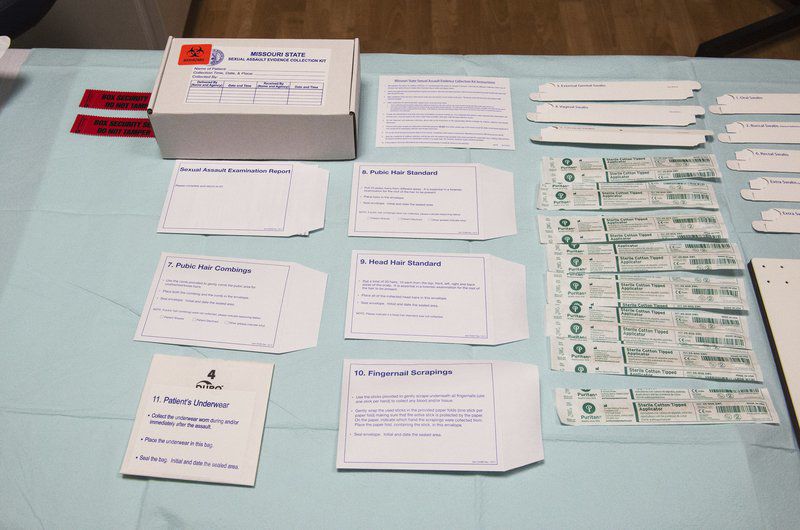 Karen Scott, SANE program coordinator at Freeman Health System, talks about the components of a rape kit on Tuesday at Freeman Hospital. Missouri has a backlog of thousands of untested rape kits that officials say they are committed to processing as soon as time and funding allow.Globe | Roger Nomer

More than 160 rape kits from the Joplin area are among those that have never been tested.

Local advocates who work with victims of sexual assault say they hope a recent report about the backlog of rape kits in Missouri will light a fire under the agencies that test those kits for evidence.

A detailed inventory of the state’s backlogged rape kits has found that nearly 90% of the backlog has never been tested, the Missouri attorney general’s office recently announced. Only 830 of about 7,000 total kits in the backlog were previously tested.

“It’s important to remember these kits are not just numbers,” Attorney General Eric Schmitt said at a news conference.

“They represent real human beings who have suffered, confronted their fears, reported the assault and submitted a kit — a kit that may have been put on a shelf and remained untested.”

In general, rape kits are DNA samplings and other evidence secured via medical procedures conducted after an attack. They can be used by law enforcement and prosecutors to catch and convict rapists.

That’s why it was so disappointing for representatives of Joplin’s Lafayette House, which works with victims of sexual assault, to hear that most backlogged rape kits have not yet been tested.

“When a victim takes that initiative (to have a rape kit completed), her assumption is there’s a point to that,” said Louise Secker, development director at Lafayette House. “And there needs to be a point to that.”

Rape kits — the more accurate term is sexual assault evidence collection kits — are available to all victims of rape and sexual assault who seek help at the emergency room at Freeman Hospital, said Karen Scott, a registered nurse and coordinator of the Sexual Assault Nurse Examiner program there. (Mercy Hospital Joplin also has a SANE program.)

Victims who show up at the emergency room can get a medical exam to treat any injuries they may have. The forensic exam that accompanies a rape kit deals specifically with the assault itself and the collection of any evidence that could aid in a criminal investigation, Scott said.

“The timeframe we work with is five days (after the assault),” she said. “Basically that’s kind of the window of opportunity to collect biological evidence.”

Any bruises or scratches on a victim’s body are photographed, and a special black light identifies any dried body fluids on their skin. Women usually receive a pelvic exam, and samples can be collected from their cervix, vagina or rectum. In oral assaults, samples also are taken from around the teeth, gums and tongue.

The kits also have room to collect small clothing items such as underwear or samples of pubic hair.

When the hourslong process is complete, everything is boxed up into the kit and sealed, Scott said. From there, what Freeman does with the rape kit depends on the victim’s wishes, she said.

“We don’t usually know the results of what’s happened with the kits unless we get called to testify about what we collected and the process we followed,” Scott said.

A victim also could choose to submit her rape kit to law enforcement anonymously. That way, the perpetrator’s DNA would be logged in national databases after the kit is tested, but the victim’s name is not attached to her case, Scott said.

The third option can lead to purposely untested kits — when the victim does not want to report the assault to law enforcement. In that scenario, the rape kit is stored at Freeman Hospital and remains untested unless or until the victim changes her mind, Scott said. All 21 untested unreported kits logged in the attorney general’s review in Newton County are at Freeman Hospital.

Most of the rape kits conducted at Joplin hospitals and reported to law enforcement will end up at the Joplin Police Department. They are checked into the department’s evidence facility, “almost immediately processed” and sent to the Missouri State Highway Patrol crime lab for analysis, Capt. Nick Jimenez said.

But according to the Missouri attorney general’s review, Joplin police currently have 43 untested reported rape kits, the highest number of any Jasper County law enforcement agency.

Jimenez said those kits are dated from 2001 to 2015, and the challenge now is finding a crime lab that will take old kits to test. With grant funding that has since run out, older kits held by Joplin police were tested until many crime labs, overwhelmed by the backlog, simply stopped accepting them, he said.

“The 43 that we have there, we’re currently working on multiple grant opportunities to get those tested,” he said. “We take this very seriously. We’re working hard, and we’re working toward completion of all these kits once funding from a grant becomes available to us.”

The Missouri State Highway Patrol’s crime lab, one of a handful in the state that tests rape kits, currently accepts rape kits that were collected after April 30, 2018, according to Lt. Collin Stosberg, with the public information and education division. Untested kits that were collected prior to that date would not go to the patrol lab at this time because of parameters of current grant funding, he said.

“Also, with any kit submitted to the Missouri State Highway Patrol lab for testing, a crime must have been committed and reported to law enforcement,” he said in an email to the Globe. “This is longstanding policy.”

The lab has tested dozens of rape kits each month this year at the same time that hundreds more kits await testing, according to information from the highway patrol’s website. In October, for example, the lab tested 66 rape kits, but as of Nov. 1, a total of 683 rape kits remained in possession of the lab and untested.

Stosberg did not respond to a question about barriers to testing rape kits and about whether adequate funding hindered the ability to clear that backlog.

The highway patrol said over the summer that numerous changes have been implemented to address the growing number of kits. Some lab workers are being moved within the division, and a new section in the lab designed to screen kits is being established, director Brian Hoey said. Other kits will be sent to a private lab.

“It is a challenge, but we will meet the challenge,” Hoey said at the time.

Across the country, rape kit backlogs exist for a variety of reasons, according to End the Backlog, a program of the national nonprofit Joyful Heart Foundation founded by actress and activist Mariska Hargitay. Those reasons could include:

• A lack of policies and protocols for testing rape kits.

• A lack of training and understanding of sexual assault and its effect on victims.

In Missouri, funding appears to be the key issue. Schmitt’s office estimates that current grant funding will allow only an additional 1,250 rape kits in the backlog to be tested.

“The attorney general’s office believes that all reported sexual assault forensic evidence kits should be tested to provide every opportunity to bring predators to justice and vindicate victims,” Schmitt’s office said in his inventory report. “Additional funds will be needed to test all reported kits; therefore, the attorney general’s office will continue to seek additional funding to ensure the elimination of Missouri’s backlog.”

Rape kits are important because they can provide evidence of the victim’s version of events, identify perpetrators and show patterns of serial rapists. They also, in some cases, can exonerate individuals who are innocent, Secker said.

She believes Southwest Missouri law enforcement and advocacy agencies are committed to addressing the backlog, but it will take a stronger commitment from everyone, including the agencies that fund the testing of rape kits, to ensure that the backlog problem is fully solved.

“I understand it’s a funding issue, but from the victim’s perspective, not having a report on the evidence collected can delay prosecution and often let a serial rapist commit (more) crimes,” she said.

In the meantime, Schmitt’s office will use its current federal grant to develop an evidence tracking system that would allow multiple stakeholders, including the victim, to track the progress and location of a rape kit throughout an investigation and prosecution. The internet-based system would be offered for free upon its completion and would “provide a statewide picture” of the handling of rape kits in Missouri, the attorney general said.

“This ensures that kits are not lost or delayed in transit from one organization to another and empowers the victims to follow the progress of their case,” his office said.

CoxHealth, which operates hospitals in Lamar and Monett, has been awarded nearly $600,000 in grants that will allow the health system to expan…