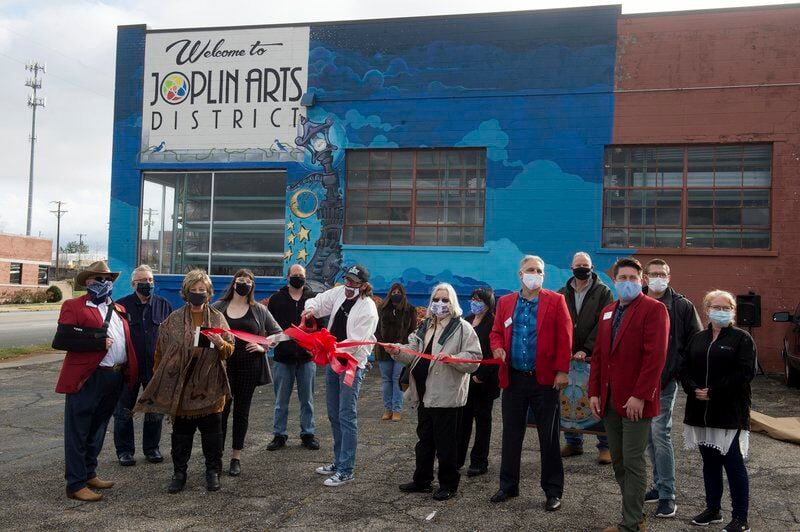 Andrew Batcheller cuts the ribbon the new Joplin Arts District mural on north Main Street on Tuesday. Batcheller and Linda Passeri were the artists on the mural. Globe | Roger Nomer 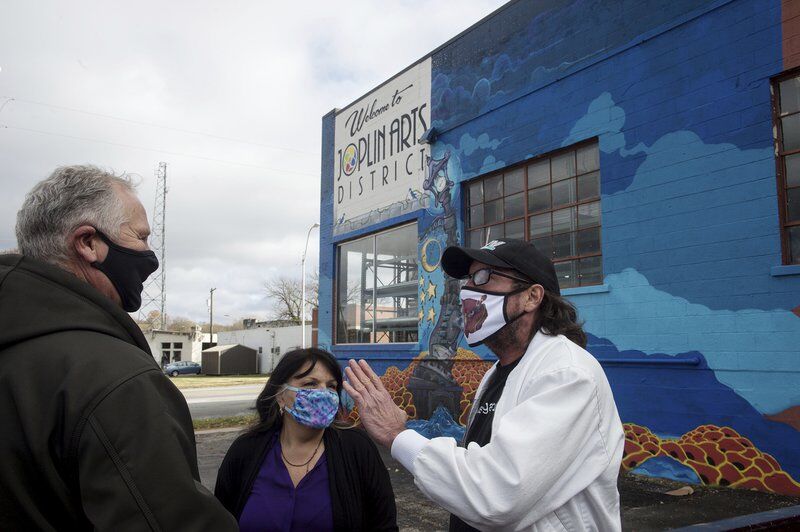 The Joplin Arts District cut the ribbon Tuesday on a new mural on the wall of Covert Electric Supply, 202 N. Main St. Joplin Arts District founder and board President Linda Teeter said the ceremony gave well-deserved recognition to the artists and the building's owner.

Teeter gave a short speech to a small crowd of masked onlookers from various community groups. She explained the symbolism of the mural and the goals of the organization for this year and the future. A representative from the Joplin Area Chamber of Commerce and Southwest Missouri Bank presented Teeter with a plaque honoring the Joplin Arts District, and artist Andrew Batcheller gave a painting to building owner Bob Heiniger.

Created last year and endorsed with a resolution from the Joplin City Council, the Joplin Arts District encompasses a 56-block area between B and 12th streets to the north and south, and Wall Avenue to Pennsylvania Avenue to the west and east. The new mural marks the district’s north end.

“We have diversity, we have culture, we have excitement, and we want to rebound,” Teeter said.

The mural depicts a lamppost in the middle of a field of poppies. Batcheller, one of two painters to work on the mural, said the poppies represent both his work and recognize Memorial Hall, which honors local veterans. Linda Passeri, founder of Springfield’s Moon City Creative District, was the other artist commissioned for the mural. She added the twisting lamppost in the center of the wall, which Teeter said was a nod to Joplin's Sunshine Lamp District.

“I think the collaboration is the best part of the whole project,” Passeri said. “It brings together a lot of elements.”

Hanging from the lamppost are a painted moon and stars, which represent the Dream Theatre Troupe and the district’s lofty goals — “shooting for the stars," Teeter said. In the bottom left of the mural are the artists' names and the district’s Instagram handle.

“I think it turned out better than we could’ve expected,” said Batcheller, who had expressed his hopes that the mural would have a “fantastical” feel to it.

Teeter said the nonprofit district’s goal is to become a tourist destination and attract business to its artists and tradesmen. All businesses in the district are members, she said, but some are monetary supporters also, and have a vote in the district's projects.

Heiniger, owner of the building, offered the brick wall for the mural, as well as the funds to rent a lift for eight days, and he plans to add lights to make the mural more visible.

“The community has always been good to us, and we like to give something back when we can,” Heiniger said, adding that it’s already common for cars to stop in the building’s parking lot to photograph the MSSU billboard mural there. He expects the Joplin Arts District mural to be another draw.

“I think it’s a good entryway to the downtown and what they’re trying to do in the arts district," he added.

Teeter said the district’s next two projects will be more signage. One will be a painted sign to be mounted on a building. For the other, Teeter has opened a call to local graffiti artists to create a work celebrating diversity. It will be on the side of another building. She hopes to have both done by the end of the year.