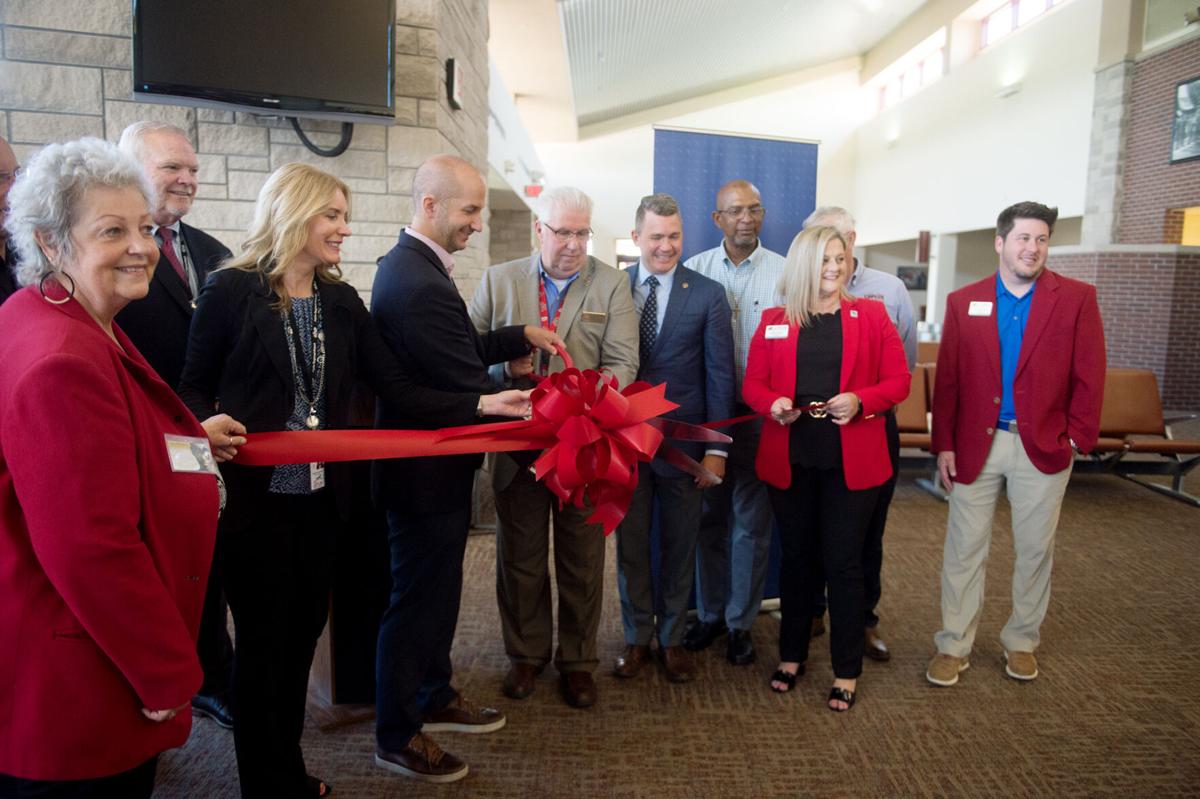 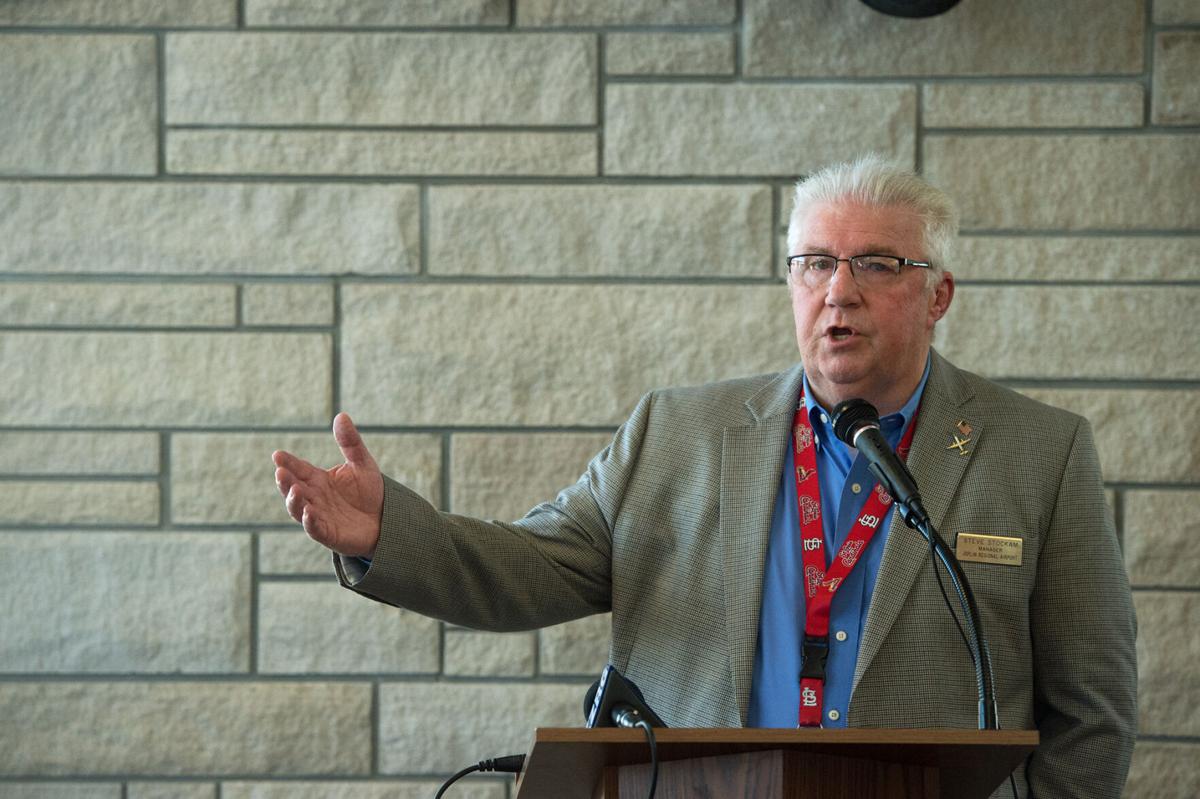 Steve Stockam, manager of the Joplin Regional Airport, speaks during Thursday's welcome event for United Express. The hubs served by United Express are Chicago, Denver and Houston, which in turn can connect travelers to hundreds of destinations. GLOBE | ROGER NOMER 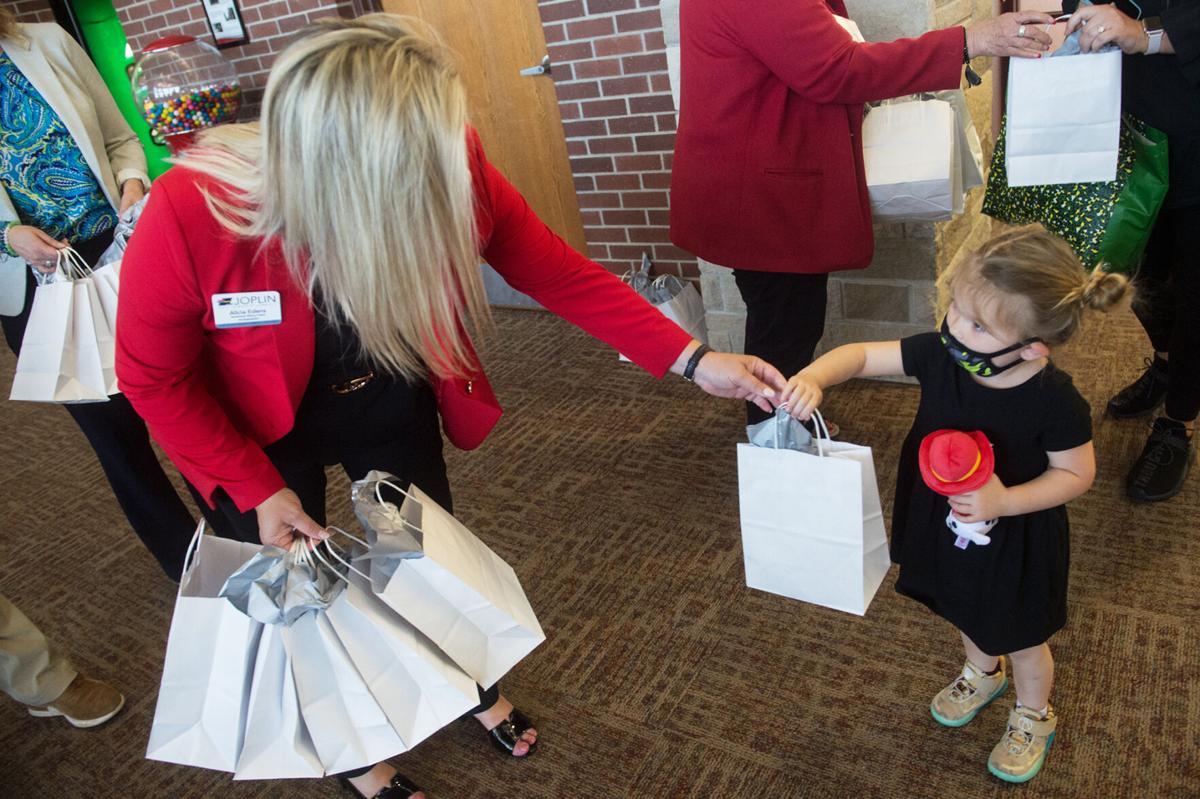 Alicia Edens, with the Joplin Area Chamber of Commerce ambassadors, gives 3-year-old Birdie Duncan a gift bag Thursday as a welcome to Joplin from a United Express flight from Chicago. Airline and airport officials say area residents appear appreciative of the new air service to Joplin in that ticket sales show bookings as far out as 90 days. GLOBE | ROGER NOMER 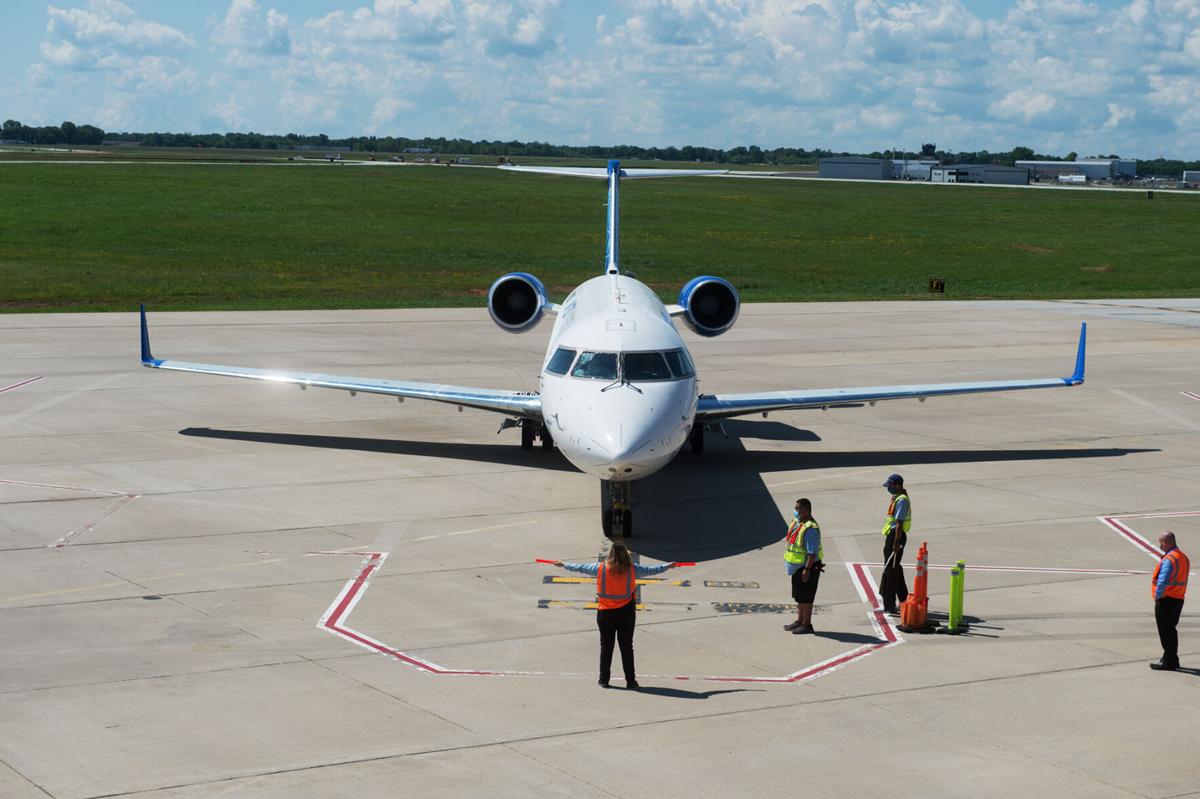 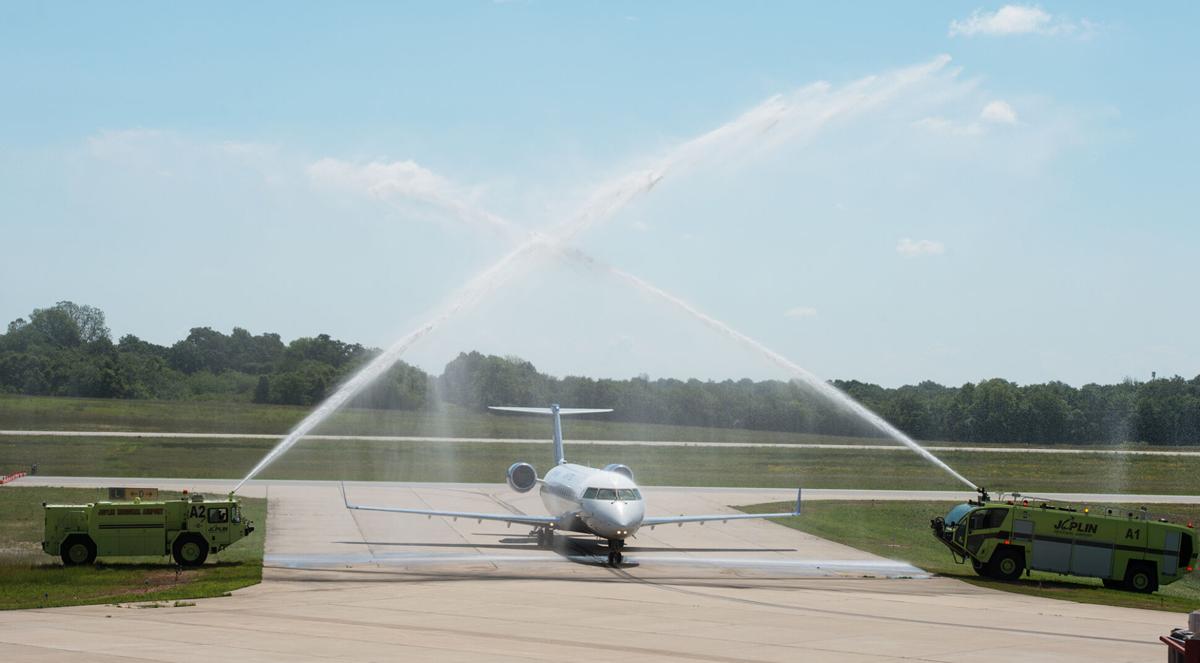 A United Express flight from Chicago is welcomed Thursday to the Joplin Regional Airport with water cannons in celebration of the start of service locally. The jets seat 50 passengers and will provide Joplin-area residents with service to three hubs. GLOBE | ROGER NOMER

Joplin has not had airline service to three hubs in 40 years, said Steve Stockam, airport manager, in welcoming SkyWest Airlines, which operates under a partnership as United Express, to town during a ceremony Thursday. United Express is an affiliate of United Airlines.

Those hubs are Chicago, Denver and Houston. The United Airlines affiliate started flights Tuesday and received an official welcome Thursday. That included the traditional water cannon salute of the new airline as the first flight of the day landed.

After that, a ribbon-cutting ceremony was held in the airport terminal by the Joplin Area Chamber of Commerce Ambassadors along with Mayor Ryan Stanley and representatives of the City Council, city staff and Airport Board.

Passengers on that flight, which originated in Chicago, received VIP treatment with gift bags presented to them as they came in the gate.

“There’s been a very good response with customers reserving flights,” said Greg Atkin, the SkyWest managing director of market development. “We are excited to be here, and we thank the city and the airport for their hospitality.”

Stanley said the transition is a big one for Joplin.

After the ceremony, Atkin said the airline was interested in providing service because “Joplin we saw as a growth community, and it has a strong business base, and we were attracted to those two features.”

Customers are booking as long as 90 days out now, a change from last year when the COVID-19 pandemic sharply reduced travel. At that time, the airline saw bookings reduced to about 45 days in advance, Atkin said.

“Right now the bookings are coming in such that we expect the flights to all three destinations to be reasonably full this whole summer,” Atkin said.

Atkin said passengers can reach more than 300 destinations through the hub airports. Denver will connect to Western cities, even some small ones. Houston provides connections to the South and Florida as well as international destinations in Mexico and the Caribbean. Chicago will provide flights to the upper Midwest and the Northeast.

“So you really have flights going every direction you need to go to connect with the rest of the country.” He said that is single-ticket travel, and tickets can be purchased on www.united.com or wherever people prefer to purchase travel accommodations.

All of the aircraft for the Joplin flights will be 50-seat CRJ200 jets manufactured by Bombardier of Canada, a global leader in jet manufacturing.

United will have 10 employees locally, but nationwide the airline employs about 13,000 with a fleet of about 500 aircraft, Atkin said. The airline will observe its 50th year in business next year.

Asked if a post-pandemic rise in travel is driving up ticket prices, Atkin said prices are higher than they were last year “but generally the airlines compete pretty evenly with each other.” Ticket prices have not yet reached where they were before the pandemic, he said.

United succeeds American Airlines, which had provided trips to and from Dallas after it started service here about 10 years ago on a federal contract for subsidized service to Joplin. American in 2019 added a Chicago hub, with the city and chamber members providing a $600,000 guarantee to help with the cost of starting those flights.

The airline stopped those flights when COVID-19 hit in March 2020. The airline posted an $8.9 billion loss on its 2020 operations and late last year notified Joplin it would stop its flights, but it was ordered to continue at least Dallas flights because Joplin was eligible for service through the Essential Air Service, the federal subsidy program that brought American here.

When the Federal Aviation Administration took bids on providing new service to Joplin, United asked for subsidies of $1,222,934, $795,943 and $498,452 to operate service to Chicago and Houston over the next three years, respectively. American Airlines had asked for a subsidy of nearly $1.53 million a year to provide 12 round-trip flights a week to Dallas.

The Airport Board and the Joplin City Council endorsed the United bid, which the FAA awarded. After winning, United decided to add the Houston hub.

Asked Thursday about the benefits of the United service to the Joplin market, Stockam said: “I think it is twofold. No. 1, we recognized and understood how important multiple hub connections are to the community. and if we’re going to continue to grow and recover after this pandemic, we needed as many options as possible. and this provides us not only two options that we were looking at before but now three options. Coverage across the United States is outstanding with those options.”

That will enable United to tap into markets of people who are wanting to get to Joplin, “and that’s extremely important when you look at economic development and you’re trying to site a company with a headquarters somewhere else and they say (about Joplin), ‘How can we get there?’” Stockam said. “I know from speaking to our chamber and economic development folks that’s a huge issue.”

Having airline access to multiple hub airports also is important to the Joplin Convention and Visitors Bureau to host events and have a way for people from throughout the country to reach Joplin, Stockam said.

Stockam believes the airline will attract 6,000 passengers in its first month here with airline officials reporting to him there are strong numbers of bookings over the next 90 days with summer leisure passengers.

The next milestone for the airport will be seeing how much business passenger traffic returns after school reconvenes and summer is over, the airport manager said. International markets likely will reopen by then, and that will be another indicator, Stockam said.

With only three days of United flights so far, “it’s worked unbelievably well, and the loads on those flights have been fantastic,” he said.