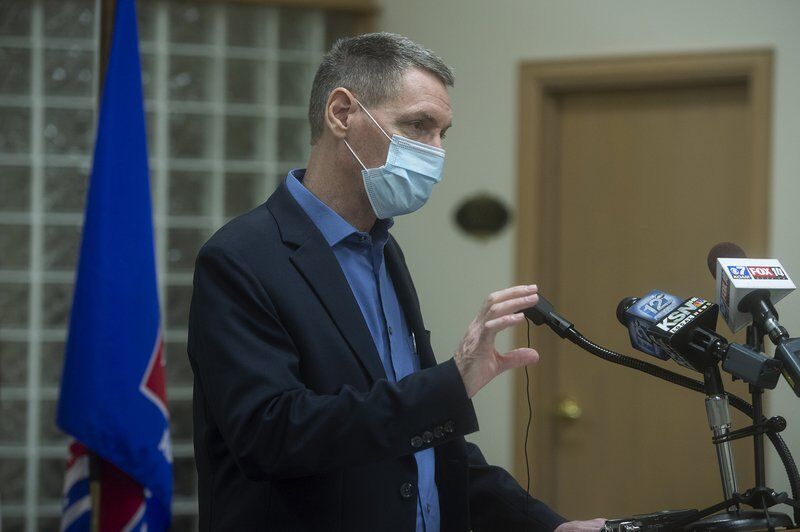 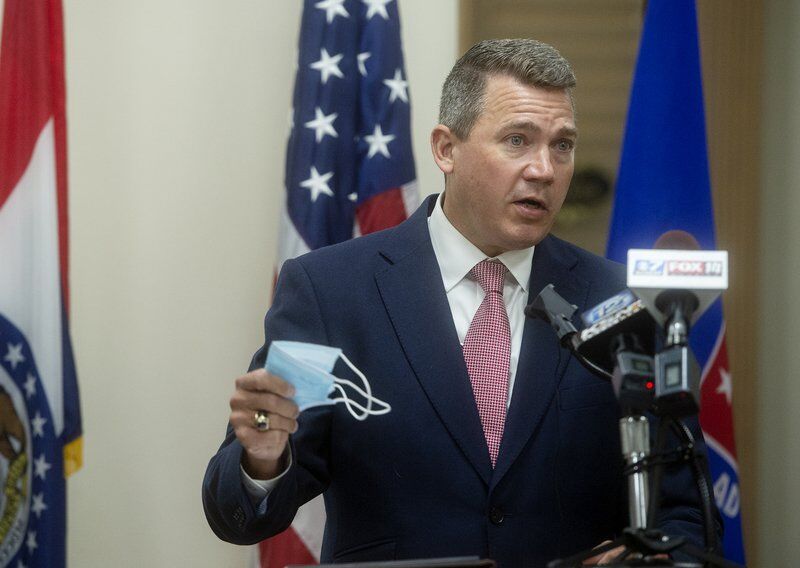 Joplin Mayor Ryan Stanley emphasizes during Monday's COVID-19 briefing at City Hall the importance of wearing a mask when one goes out in public. He said the continuing climb of cases in the city continue to concern, worry and frustrate officials. GLOBE | ROGER NOMER 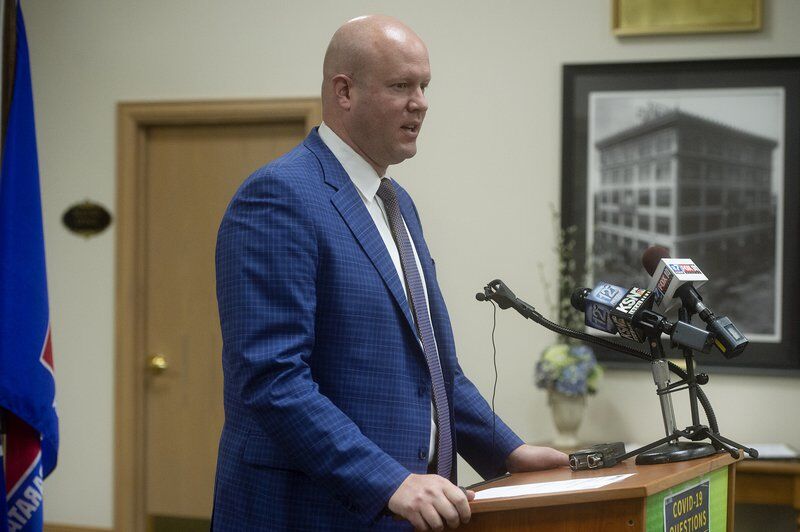 Joplin Mayor Ryan Stanley emphasizes during Monday's COVID-19 briefing at City Hall the importance of wearing a mask when one goes out in public. He said the continuing climb of cases in the city continue to concern, worry and frustrate officials. GLOBE | ROGER NOMER

Joplin's cases of COVID-19 continue to climb, and though hospitalization numbers have been comparable over the last couple of weeks, that is no consolation to city officials, the mayor said Monday at a briefing being conducted every two weeks.

"Today, reporting on our COVID response and our COVID situation, we certainly have cases that are on the rise. We're at the highest level of cases that I can remember us having," Mayor Ryan Stanley said.

"As our cases are on the rise, it does feel like the hospitalizations so far have been fairly flat," Stanley said. "And I am not necessarily thinking that means that we're winning. I think maybe when cases are on the rise that means hospitalizations could potentially increase. It is something that is giving us concern, worry and frustration. It's evermore important to wear a mask if you are capable of wearing one, wash your hands, social distance, stay home if you're not feeling well. Let's do all those things we know are COVID responsible."

The hospitalization numbers have hovered at or above 40 for at least two weeks now. Case numbers also continue to climb.

Dan Pekarek, assistant city manager and acting health director, said that as of Saturday the city had 188 active cases. That number was raised Monday afternoon to 190. That brings the total of confirmed cases reported since March 23 when the city had its first case to 1,013. There are 804 people with inactive cases, according to the city's numbers.

The city's dashboard, which for weeks had reported 21 COVID-19 deaths, reported 23 deaths on Saturday and 24 deaths on Sunday before reverting to 21 deaths on Monday morning. A city spokeswoman said the weekend numbers were an "entry error" on the dashboard.

The 21 deaths all involved residents of Spring River Christian Village. Pekarek said it is likely there will be more deaths, given Joplin's numbers. A 22nd COVID-19 death, that of an 89-year-old woman, was reported late Monday.

The city on Monday reported that 316 people were in quarantine. Those are people who may have been exposed or were listed as a contact of a person who tested positive.

Some of the local cases can be attributed to schools and colleges, he said.

In a letter to parents of children in Joplin schools, Superintendent Melinda Moss said that prior to the start of the semester, the health department notified the schools that six students had tested positive and were in isolation with 43 contacts in quarantine. There also were two employees isolated and three in quarantine.

As of Friday, the district had 12 students who had tested positive and placed in isolation, and 84 students quarantined. There also were five isolated employees and eight quarantined employees.

"These are not concentrated on any particular campus, and the vast majority of the current positive cases appear to be the result of community or household spread," Moss said in the letter, which did not list which schools had current cases.

"By and large, overwhelmingly the cases we are seeing have an unknown cause," he said. "We don't know where they were exposed to the illness."

Like the mayor, Pekarek called on residents to take precautions to try to reduce the spread.

"It's so important for us to continue to social distance, to wear the masks if you have to be out, and if you're ill, stay home because that community transmission is what's driving a lot of our cases in Joplin."

Symptoms of the illness are chills, fever, cough, headache and a new loss of taste or smell. Another symptom, shortness of breath, warrants a call to a person's doctor to get instructions on how to proceed, Pekarek said.

At the end of August, active cases had reached 99.

The previous highest count was 83 active cases on July 6. At that time, the Joplin City Council had rejected an ordinance requiring masks about two weeks earlier, and came back at a special meeting July 8 to impose one by a vote of 6-3.

Active cases dropped in late July and early August, reaching a low of 31. They began to rise Aug. 13, just ahead of the Aug. 17 expiration of the mask ordinance. Though the council debated whether to continue, the ordinance was allowed to expire then by a 5-4 vote of the council.