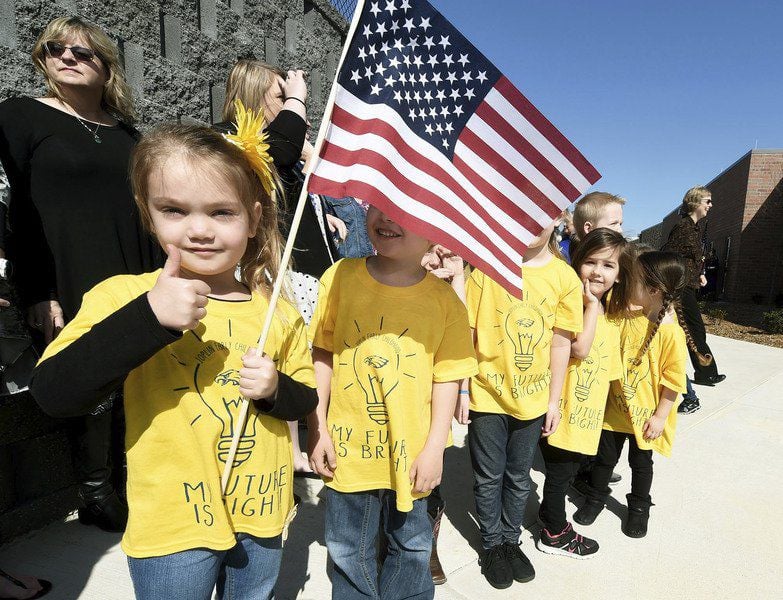 Four-year-old Zoey Whitten signals her critique of the new Joplin Early Childhood Center during a ribbon-cutting Thursday at the $10 million building at 2825 S. McClelland Blvd. The center was opened to pupils on Monday. GLOBE | LAURIE SISK 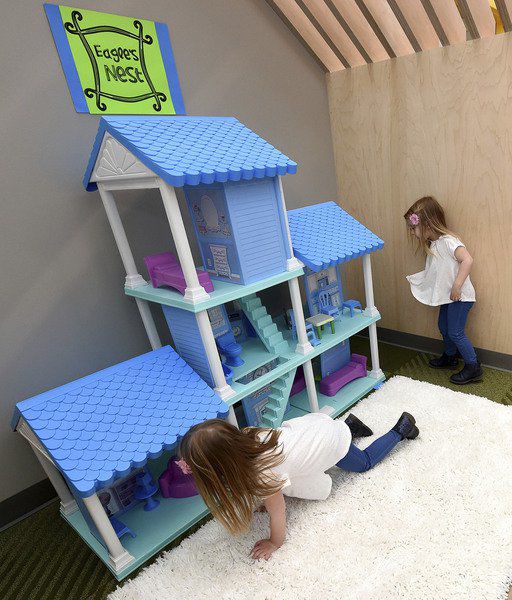 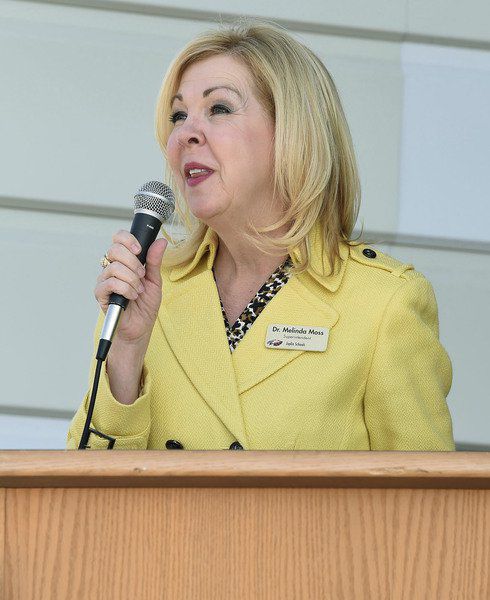 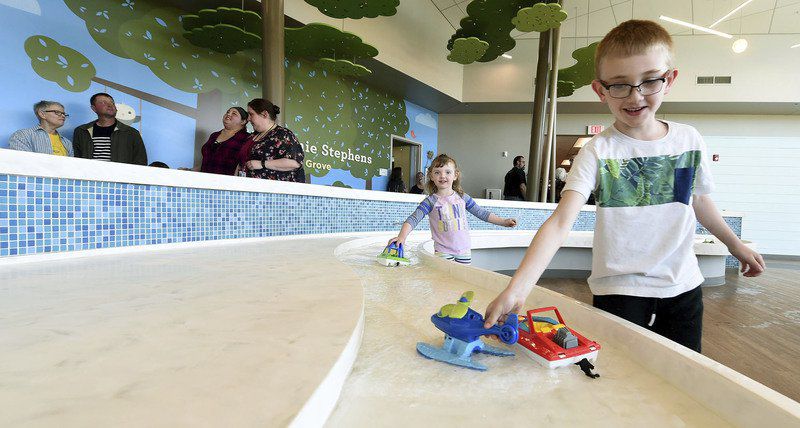 Bentley Allphin, 6, and his sister, Anslee Allphin, 4, on Thursday check out the water feature that also serves as a hand-washing sink in the Stephanie Stephens Learning Grove inside the Joplin Early Childhood Center.GLOBE | LAURIE SISK

Four-year-old Zoey Whitten signals her critique of the new Joplin Early Childhood Center during a ribbon-cutting Thursday at the $10 million building at 2825 S. McClelland Blvd. The center was opened to pupils on Monday. GLOBE | LAURIE SISK

Bentley Allphin, 6, and his sister, Anslee Allphin, 4, on Thursday check out the water feature that also serves as a hand-washing sink in the Stephanie Stephens Learning Grove inside the Joplin Early Childhood Center.GLOBE | LAURIE SISK

As speakers gathered, a sound that, if not for the pint-sized source, might have been an irritant, nearly drowned them out.

Perhaps fittingly, laughter and other playground rumblings Thursday afternoon were briefly just as audible as the various dignitaries dedicating the new Joplin Early Childhood Center. Pupils arrived earlier this week at the new 38,000-square-foot children's center at 2825 S. McClelland Blvd., and the public got its first look at a ribbon-cutting and open house.

After first leading the crowd in the Pledge of Allegiance, several of the Joplin School District's smallest Eagles assisted with the ribbon-cutting honors.

"It is overwhelming in the best way," said Melinda St. Clair, the school district's director of early childhood education. "It's been a wonderful week. We just started having our kids come on Monday, and the kids have been so excited and so happy. And the staff has been so excited and happy. It's been a long time coming and quite a journey, but we're so happy just to have a home we can call our own. And our parents are thrilled, so it's been a great week, it really has."

The early childhood program had been located in trailers at McKinley Elementary School since the 2011 tornado. In 2017, it wrapped its first year in a temporary site, the old Duenweg Elementary School.

The new building will allow Joplin to expand its early childhood program to serve more than 320 students, ages 3 to 5, with half-day preschool and day care.

JEC's new building got high marks from several of the pupils and their parents in attendance at Thursday's ceremony.

"It is breathtaking," said Sarah Whitten, whose daughter, Zoey, began at JEC this week. "We're so excited; we started out in the trailers with some of our oldest kids, and so to see this, it's really beautiful. (They're) just amazed. She's proud of her new school, she wants to show everybody."

"I think it's great; I love the outside equipment," said Marquita Hernandez, who has three kids at the new JEC. "It's very nice, they made it easier for kids with special needs, and I enjoy it very much, even though they're scared of the slide."

The JEC features 20 classrooms, common learning spaces outside the classrooms, various activity nooks and a brightly decorated learning grove in the center of the building, which is named for the late Stephanie Stephens.

Stephens was the Joplin School District's first director of the early childhood special needs program, a position she held until her death. She began working with the district in 1989 as a kindergarten teacher at Irving Elementary.

For a time, Stephens also served as principal of Washington Education Center, and in 1999, she ran the summer school career program. She established the Great Expectations program, and her school was named as a model for the state of Missouri. Throughout her tenure, she oversaw the Parents as Teachers program.

The building also carries a reference to Melissa Fuell Cuther, as the administrative and child services area was named for the late Joplin educator. In addition to teaching at Lincoln School, Cuther also helped found the George Washington Carver National Monument in Diamond by writing letters to senators in Washington, D.C., explaining to them the importance of Carver and the need to preserve his legacy. During the late 1940s, she directed Carver Day celebrations, and the monument was dedicated in 1953.

She established the Carver Nursery School in 1951, and it served more than 600 children in its first 10 years.

The $10 million project was funded by $5 million in federal Community Development Block Grant money from the city of Joplin and $5 million from the state of Missouri.

Construction crews will soon return to the new Joplin Early Childhood Center to add a full-scale kitchen to the building.