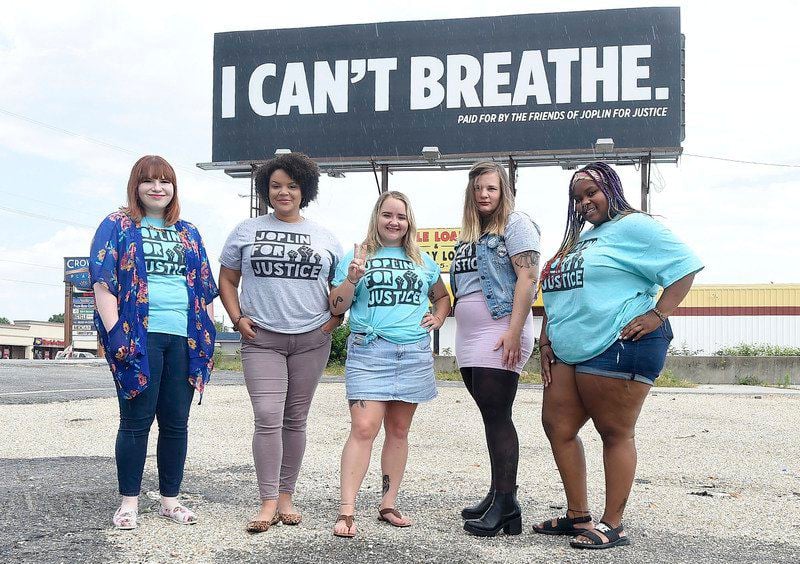 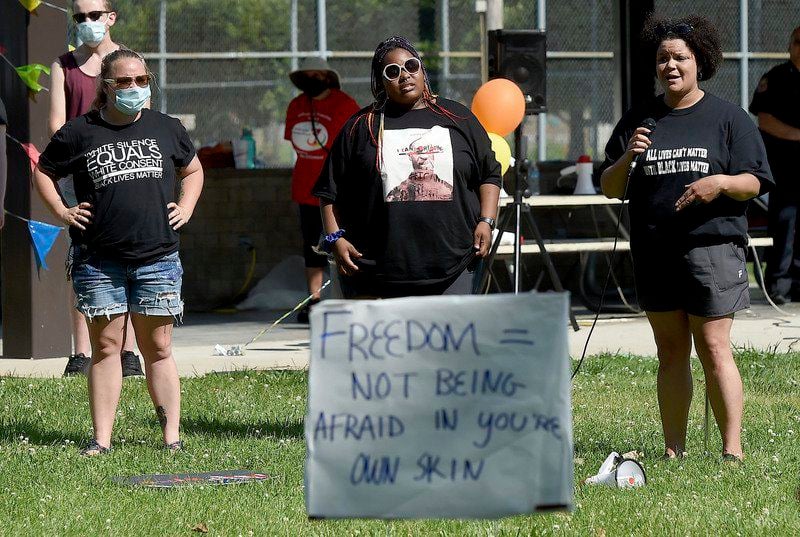 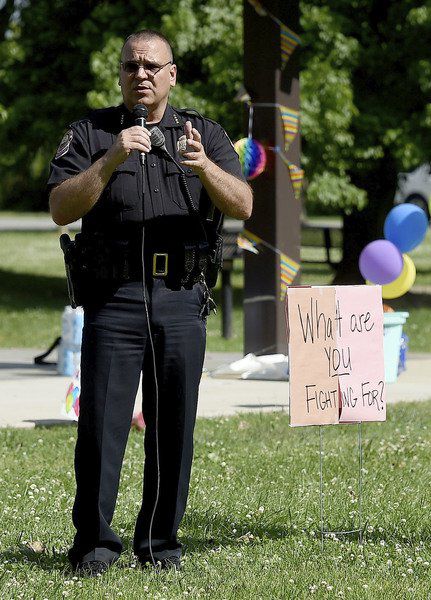 Joplin for Justice, having organized several peaceful demonstrations last month, has erected an "I can't breathe" billboard on Range Line Road that its members hope will advance conversations in the area about race and justice.

They also are asking the Joplin Police Department for details about past shootings, use-of-force reports and hiring practices.

The group has had a high profile since the death of George Floyd in May in Minneapolis.

Members held three rallies in support of the Black Lives Matter movement at high-traffic locations in Joplin as well as one online rally, all of which were deemed a success, according to Dola Flake, Joplin for Justice co-organizer.

“The in-person turnout overall in the first three rallies was about 500 to 600 people combined,” Flake said. “Our online event has been viewed over 3,000 times, so we’re really excited about the exposure that we got. We are seeing growth in participation on our Facebook page and also increase in numbers, as far as collaborations of different events and efforts towards justice.”

The group said its goals include advocating for accountability and transparency for law enforcement, and working “to promote diversity, inclusion, equity and improved relationships between JPD and the Joplin greater community.”

“We’re also working on a platform to allow people to tell their stories about injustice and creating more awareness and education, with our focus right now being the people of color,” said Flake.

Friends of Joplin for Justice recently funded and erected a black billboard near 12th Street and Range Line containing the three words that have become a national rallying cry against police brutality.

“We chose the message ‘I cant breathe’ because it’s an incredibly powerful message that directly highlights injustice toward people of color in the criminal justice system, which is currently our focus,” said Flake.

The words were recently spoken by Floyd, a handcuffed Black man who died on May 25 in Minneapolis after Derek Chauvin, a white officer, used his knee to pin Floyd to the ground. Chauvin has been charged with second-degree murder and second-degree manslaughter. They also were the words gasped by Eric Garner in 2014 before dying after being placed in a chokehold during an arrest by a New York City police officer. The white police officer was never criminally charged.

“We realize the billboard is an emotional message, and it has triggered some emotional responses,” said Flake. “With that has come a lot of conversation, which is exactly what we hope to see. We have gotten a lot of reactions that don’t support the billboard, and unfortunately, some of those reactions are revealing issues that we have with racism in the Joplin area.”

Joplin for Justice plans to leave the billboard up through the end of the year. The plan is also to fund it with community donations. The group’s GoFundMe page for the billboard has raised more than $1,600.

“We felt like the money spent on the billboard was well spent because it’s easy for a conversation that’s important to fade away,” said Flake. “We wanted to keep that conversation going. When we break it down into a daily amount, it’s about $40 a day, and the thousands of people who will see the billboard, we think of that as an excellent return just as anyone else who puts up a billboard does.”

Jamie Lindsey, another Joplin for Justice co-organizer, said the billboard has helped raise awareness and has brought more traffic to the group’s Facebook page.

“It wasn’t something that the organizers of Joplin for Justice had personally invested in the very beginning, but once we started seeing the momentum behind that, we definitely wanted to continue to advertise that and get our community behind that message,” she said.

About a month ago, Joplin for Justice also launched a petition seeking Joplin Police Department records of recent police shootings, use-of-force and internal police reports, lawsuits against the department, and details on minority employment. The petition has nearly 400 signatures, and Flake said organizers hope to reach at least reach 2,000 people.

“We have been talking with JPD, and they are open to listening and having conversations,” she said. “As far as the specifics of the petition, we have not discussed those with JPD. However, there was an announcement that they’re working on making the policies and procedures publicly available online. We believe that since our petition was initiated prior to that announcement that we are already making an impact.”

Joplin police Chief Sloan Rowland said the department hasn’t officially received the petition but said he's open to reviewing it and having a dialogue with Joplin for Justice leaders. He said any organization, business or agency that’s not constantly reviewing how it does things is stagnating. He also said JPD conducts policy reviews every month.

“From what I understand, with talking to Dola Flake and a couple of other people, they're going to ask about how we deal with complaints and how we do internal investigations,” Rowland said last week. “Part of that would be more education on how we do that. I think there’s a lot of stuff we’re already doing.”

The petition asks for detailed reports of police shootings over the past five years, demographics of individuals involved and the type of method used to identify whether any officers have been repeatedly involved in shootings.

“This report should also provide evidence that appropriate remedial actions are taken when necessary (counseling, retraining, formal discipline, transfer, etc.),” the petition says. “It isn't essential that officers be identified by name, we suggest law enforcement be identified simply by a code number, which can focus public attention on the problem of excessive shooters.”

“Our petition to the Joplin Police Department is not an effort to be anti-police but an effort to build relationships with the community and to improve the practices of law enforcement locally,” said Flake.

Rowland said a lot of what the group seeks is already public record, but some of it is outside the department's control. For example, Joplin police require an outside review if there is an officer-involved shooting. That's usually the Missouri State Highway Patrol, said Rowland. This prevents allegations of bias or of a cover-up.

“The highway patrol actually investigates the shooting itself and determines whether or not there’s any criminal charges to be filed — whether it was a good shoot, a bad shoot — they make that determination,” said Rowland. “At the same time, we’re doing an internal affairs investigation and make sure there were no policies violated, that everything was in our use-of-force policy. You could actually have a good shoot criminally — do nothing wrong on that side — but still maybe violate policies or vice versa, so we do a bifurcated (review) where there’s two investigations every time we have a shooting.”

The JPD also conducts several reports of its own including the Internal Affairs report, which is compiled and released quarterly and annually. Rowland said this shows every investigation that Internal Affairs has ever done and what the results were, but it won’t include the officers’ or employees’ names.

“The thing it does, too, is we also document all of our use of force with comparison graphs, which compares it to the years previous, so every single use of force goes into that report too,” Rowland said. “We’re really already publishing that. There’s a yearly report that comes out that tells every single complaint, racially based complaint, everything we’ve got comes out.”

The group is also asking for lawsuits brought against JPD, which is also public record, notes Rowland.

The last section of the petition calls for the “release of minority employment data pertaining to recruitment and retention of minority people within JPD.”

“That’s going to be an interesting one because when you apply for a job, I believe there’s a cover sheet that the feds require that you fill out all of your demographics on,” said Rowland. “Then, that’s taken off and sent in where it’s documented by the federal government and maybe the state too. We don’t get that, so we don’t have a list that says every single minority and who they are. We have a very diverse department. I have a number of minorities across the board. But I, as a police chief, don’t have a list that I could give them.”

Another big push for policy change from demonstrators and advocates across the nation has been the eradication of chokeholds, and Rowland said chokeholds haven’t been allowed at JPD for more than 20 years.

“We’ve never allowed that, well before I was even here,” he said. “We even made some changes 15 years ago to do away with the lateral vascular neck restraint. We have policies that say you have to intervene if you see something illegal or that you have to intervene if you see someone’s getting their constitutional rights violated. A lot of things you’re seeing nationwide, we’ve been doing forever anyways. Part of that, when I took over as chief, has been educational awareness and if we’re getting our story out and telling people that. And sometimes we don’t.”

Flake said while Joplin for Justice is currently focusing on how to improve the treatment of people of color in America, its mission will go beyond that.

“We hope to be a platform that allows us to take community action and improve different systems, whether that be policies and procedures or increasing education,” said Flake. “Long term, we want to make a substantial impact across various issues related to injustice.”

To read the full Joplin for Justice petition to the local police department, visit https://bit.ly/2W5aDp8.