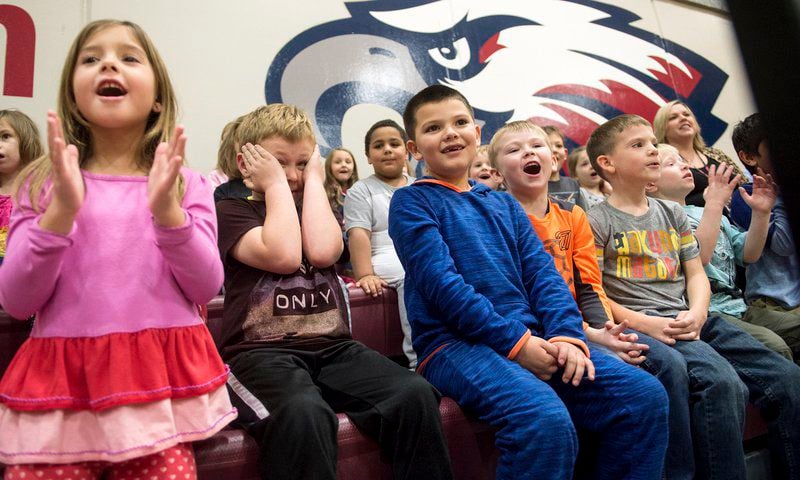 Kindergarten students at Cecil Floyd Elementary react to bicycle feats by the StuntDudes on Tuesday during a presentation for Joplin Schools All Kids Bike program. Training in the ability to ride bicycles will become a part of the kindergarten curriculum at all Joplin elementary schools. GLOBE | ROGER NOMER 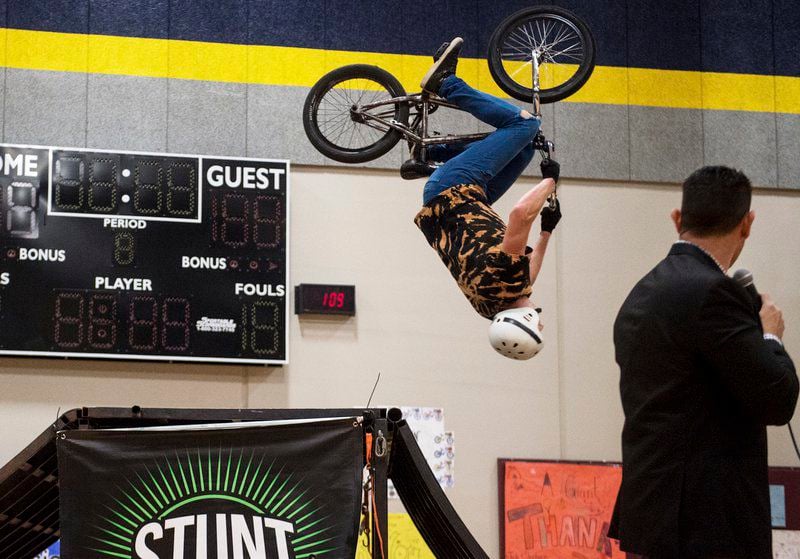 John Andrus, midwest director of the StuntDudes, performs a flip for students at Cecil Floyd Elementary during a presentation Tuesday in connection with the All Kids Bike program. GLOBE | ROGER NOMER

Kindergarten students at Cecil Floyd Elementary react to bicycle feats by the StuntDudes on Tuesday during a presentation for Joplin Schools All Kids Bike program. Training in the ability to ride bicycles will become a part of the kindergarten curriculum at all Joplin elementary schools. GLOBE | ROGER NOMER

John Andrus, midwest director of the StuntDudes, performs a flip for students at Cecil Floyd Elementary during a presentation Tuesday in connection with the All Kids Bike program. GLOBE | ROGER NOMER

By the end of the school year next spring, all Joplin kindergarten students will know how to ride a bicycle.

Thanks to a fundraising campaign spearheaded by members of the Joplin Area Chamber of Commerce and the Trails & Connectivity Work Group, $33,000 was raised in just two months to incorporate an innovative bike-riding program — the Kindergarten PE Learn-to-Ride Curriculum, offered through All Kids Bike and the Strider Education Foundation — into the Joplin School District's 11 elementary schools.

By the end of the spring 2020 semester, graduating kindergarten students will be the first group of Joplin students to have learned bike-riding basics and safety measures through their school’s physical education classes.

“This is simply amazing for our kids,” said Teresa Adams, Soaring Heights Elementary School principal. “A lot of (kindergarten students) are not learning how to ride bikes, so this program is a great way for them to learn how to ride.

“They’ll be able to leave kindergarten having learned a life skill.”

When All Kids Bike Ambassador John Hunter, who is also vice president of the Joplin-based American Ramp Co., told a large gathering of young Cecil Floyd Elementary School students what they thought about the idea of riding bicycles inside their schools, his words were met with squeals of approval.

Moments later, three professional BMX bikers from the athletic stunt group StuntDudes used a large box ramp in the middle of Cecil Floyd’s community safe room to show off some stunts, including a complete head-over-heels flip.

“More and more kids aren’t riding their bikes anymore,” Hunter said. “Fifty years ago, everyone rode bikes. Even 20 years ago. But now? Fifty percent of kids, by the time they reach fifth grade, don’t know how to ride a bike.”

Between 2014 and 2018, the number of children between the ages of 6 and 17 who rode their bikes more than 25 times per year fell by more than 1 million, according to the Sports & Fitness Industry Association, per The Washington Post.

And as the number of children riding bikes has declined, obesity numbers have skyrocketed. According to the Centers for Disease Control and Prevention, obesity now affects 1 in 5 children.

“Bikes offer so many good things, which is why it’s so important we teach kids how to ride a bike," Hunter said. "If they’re not learning how to ride (bikes) at home, the best way to teach that is in the schools.”

Once the elementary PE teachers learn the curriculum, which they are doing now, each elementary school will receive 18 unassembled Strider bikes, along with curriculum, teacher support, pedal conversion kits and helmets. Beginning next spring, kindergarten students will be taught how to ride the bikes in step-by-step stages — first, learning how to balance atop a bike without pedals — scooting along the floor using their legs and feet — before graduating up to bikes with pedals installed, and so on.

Without support from Joplin School District administrators, Hunter said, Tuesday’s celebration would not have been possible.

Melinda Moss, Joplin school superintendent, said she was thrilled to have the chance to bring the All Kids Bike program to Joplin’s schools.

“Cycling is a lifetime sport that promotes wellness from childhood into adulthood,” she said, adding that by far the most important aspect of the curriculum is "raising healthy individuals."

John Andrus, a member of StuntDudes, said if it was up to him, every school district in America would be teaching their youngest students how to ride bikes. At least for Joplin kids moving forward, it looks as if they’ll now have that rare opportunity.

“I just wish this had been around when I’d been in school,” he said.

A study published in the public health journal Accident Analysis & Prevention suggested that more than 2.2 million children ages 5 to 17 were treated in U.S. emergency departments for bicycle-related injuries from 2006 to 2015. That equates to more than 600 cases per day or 25 every hour.

Christina Williams, one of many donors and supporter of the All Kids Bike fundraiser, recently wrote on her Facebook page: "When all children grow up learning how to ride bikes and learning to ride safely, our entire city becomes a safer place for all to ride."