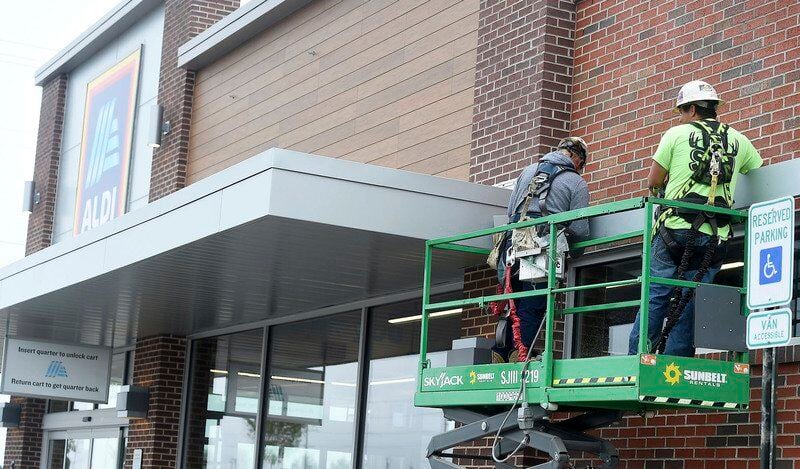 Workers with Crossland Construction install sunshields on windows as the new Aldi store on South Maiden Lane nears completion. The $2.25 million Aldi store on the west side of Joplin, at 2630 S. McClelland Blvd., is contributing to what is expected to eclipse $200 million in construction this year in Joplin. The 2.75-acre site for the store was purchased from Joplin's tornado land bank, the Joplin Redevelopment Corp., last summer for $900,860.GLOBE | LAURIE SISK 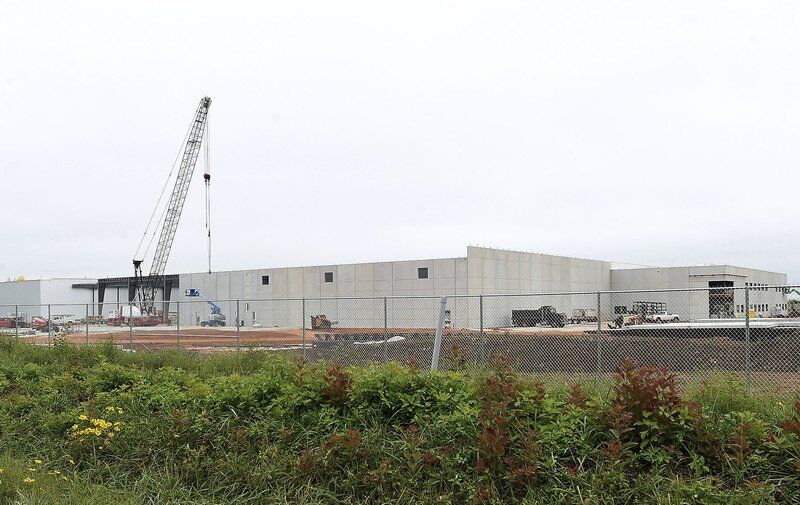 Construction continues this week on the new Casey's Distribution Center off of Prosperity Road in Joplin's Crossroads Center Business and Distribution Park. The build permit for the building list the cost at $43.9 million.GLOBE | LAURIE SISK

Joplin is on track to do something it hasn't done since the 2011 tornado — push past $200 million in construction for the fiscal year.

Total construction came to about $22.2 million for August and to $195.5 million so far for the city's fiscal year, with two months still to go and one major project imminent.

From 2011 through 2013, construction in Joplin topped $200 million, as new schools, new homes, new stores and even a new hospital were built, and other buildings were rebuilt. Since then, Joplin's best year for construction was 2017 with $177 million, based on building permits filed with the city. The building permits, by the way, reflect only that construction taking place within the city limits, not in the surrounding area.

One of the largest permits in August, valued at $5 million, was issued for a project at 3900 S. Range Line Road, the Schaeffler Group plant. It is part of a larger $67 million expansion at the plant to allow it to handle additional manufacturing rather than buying products overseas, according to Matt Thompson, operations manager and project manager for the plant expansion, and Michael Pees, plant manager.

The two men said the expansion will allow them to "insource from China some of the products that we were buying."

At the time that Schaeffler announced its expansion in 2018, company officials said the goal of the project is to make the Joplin plant "our flagship industrial facility."

Thompson said the company has seen the value of the local workforce, which is part of the reason for the emphasis on Joplin. He said employment at Schaeffler is currently between 270 and 300 people.

Other major building permits filed so far this fiscal year:

• $43.9 million for the new Casey’s General Stores warehouse and distribution center at 2902 Jaguar Road, near the interchanges of interstates 44 and 49. The distribution center is the third for the Iowa-based chain, which has more than 2,000 stores. Casey’s said in a statement the Joplin center would distribute goods for 400 to 600 of its stores.

• $32.1 million at 2901 St. John's Blvd. for a dental school on the Joplin campus of the Kansas City University of Medicine and Biosciences. The total cost of the dental college is projected at $80 million. Half has been committed by KCU’s board of trustees, with the rest being raised locally.

• $7.2 million for a Jasper Products project at 7710 E. 26th St. In 2015, a permit for $2 million was issued for the construction of a warehouse at that address, which is in the Crossroads Center Business and Distribution Park.

• $3.6 million for the former Carl Richard’s Bowl East property at 3131 Ten Pin Lane off of North Range Line Road. Employer Advantage announced last year that it planned to remodel the former bowling alley on 6 acres as its new headquarters.

• $2.38 million for expansion and renovation of the Joplin Boys & Girls Club of Southwest Missouri at 317 Comingo Ave.

Also this fiscal year, 174 new homes have been started in the Joplin city limits, with a value of $29.6 million, or about $170,000 per home. That does not include the cost of the land.

Two big projects also are on the horizon, although one of those is not expected to happen this fiscal year.