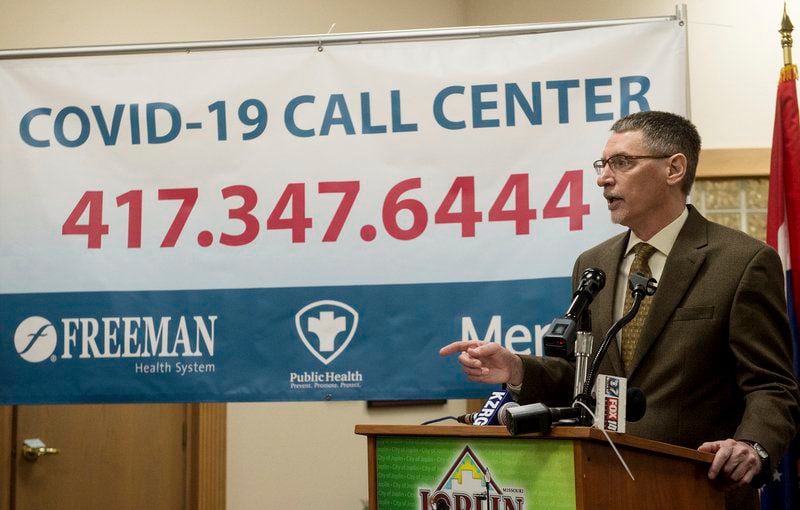 Dan Pekarek, director of the Joplin Health Department, talks about measures to prevent COVID-19 during a press conference on Monday at Joplin City Hall. Officials were emphasizing that only a limited number of testing kits for the coronavirus are so far available in Joplin.GLOBE | ROGER NOMER 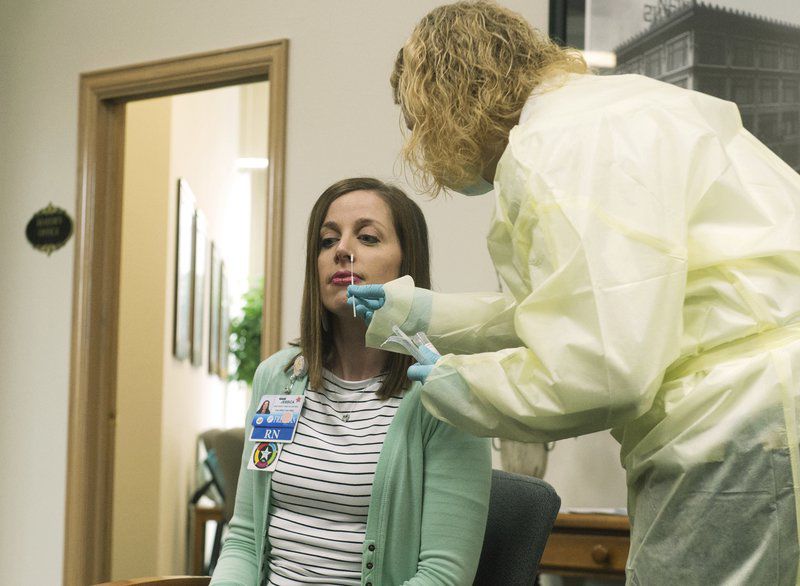 Dan Pekarek, director of the Joplin Health Department, talks about measures to prevent COVID-19 during a press conference on Monday at Joplin City Hall. Officials were emphasizing that only a limited number of testing kits for the coronavirus are so far available in Joplin.GLOBE | ROGER NOMER

The first presumptive case of COVID-19 in Joplin was announced Monday night, after local health providers announced that morning that they had assembled enough tests to step up detection of the pandemic in the community. The count of confirmed cases in the region climbed to seven.

The person is a resident of Joplin on the Jasper County side, he said.

The patient is isolated at home, the health department director said, and some individuals who have had contact with the person also are quarantined in their homes.

No additional identifying information is being provided.

The Joplin Health Department and the Missouri Department of Health and Senior Services will work together to determine any other close contacts of the individual who were possibly exposed. If exposed, health officials will provide information to them and monitor them for the development of symptoms.

There also was a newly identified case admitted for treatment Monday at Mercy Hospital Joplin, though that person is not a Joplin resident.

"After having been tested for COVID-19 at an emergency department in the surrounding area, a patient was referred to Mercy Hospital Joplin for care," hospital officials said in a statement.

"Since arriving to our hospital, the patient’s test results came back positive. Our staff was prepared and has continuously followed the appropriate CDC protocols since the patient arrived in order to eliminate any risk of exposure to co-workers and patients,” the hospital stated. The patient was referred from Bourbon County, Kansas, but the patient's age was not immediately available.

Local health departments have reported five other confirmed cases of COVID-19 in the area. As of Friday night, two positive cases were confirmed, one each in Jasper County and in Cherokee County, Kansas.

• Cherokee County officials announced a second case over the weekend — that of a 69-year-old man who is quarantined at home.

Betha Elliott, the county's health department administrator, said officials have ruled out any recent travel to known high-risk areas and have not identified any recent contact with known positive cases for the patient.

That county's first case was a 52-year-old man who also is quarantined at home.

One was identified as a child younger than 5; the other a woman younger than 60. Both were being isolated and have not been hospitalized, officials said.

County officials have been in contact with both the adult patient and the child's parents and were working to identify any recent close contacts they have had to determine who may have been exposed.

• A rural Jasper County case announced Friday involved a traveler to Europe who self-quarantined at home after returning from the trip March 16 and started having symptoms on Wednesday.

A call center where residents concerned about symptoms can telephone for a determination on whether they should be tested opened Monday and a drive-thru testing site will be available to those referred by the call center, it was announced Monday at Joplin City Hall.

Symptoms that may indicate the virus are a fever of 100.4 degrees or higher, a dry cough or shortness of breath. A runny nose and nasal congestion are not symptoms, said Dan Pekarek, Joplin's health department director. He said there likely will be more local cases as more testing is done.

The availability of the call center and drive-thru swab testing for the virus is provided through a collaboration among the Joplin and Jasper County health departments, Freeman Hospital West, Mercy Hospital Joplin and the city of Joplin.

Paula Baker, president and CEO of Freeman, said Monday the call center will be staffed by both Freeman and Mercy staff members. It will operate from 8 a.m. to 5 p.m. Monday through Friday.

A series of screening questions will be asked those who call.

"There is going to be multiple phone extensions, but there is still going to be a high demand for the screenings, so sometimes that can take a few minutes to determine if a COVID test is needed," she said. "We request your patience as those lines will likely get busy, but we will get to your call."

If the person meets the criteria based on the screening, they will be given a doctor's order for a swab test at the drive-thru testing site, which will be located in the lower level parking lot at Thousand Oaks Imaging Center, 1905 W. 32nd St.

"Access there will be restricted to those preapproved for the test," Baker said.

There could be a charge for the test because it is unknown yet whether the state or federal governments will cover those costs.

It will take several days to process the tests. The Joplin and Jasper County health departments will notify those tested of their results. "Obviously positive results will result in home isolation," Pekarek said.

Jeremy Drinkwitz, president of Mercy Hospital, commended the efforts of all of the Joplin area's health community for working together on the call center and testing. He said the test center will be open Tuesdays and Thursdays by appointments made through the call center.

"If you do not get your approval, you will not be allowed to go to the collection (testing) center, and the reason that's important is because there is still a very limited number of testing kits available between Freeman and Mercy, so we want to make sure that we have followed our protocols and our guidelines," he said. There will be 20 tests a day available to start because of that, Drinkwitz said.

"Both hospital systems are actively pursuing all avenues to get more swabs and more testing kits, but at this moment we are trying to be good stewards of our resources to make sure we have enough testing kits" for patients who come into the hospitals as well as those sent to the testing center, he said.

People who want to check out their symptoms for the new virus may contact the newly established COVID-19 call center — 417-347-6444. If the call center determines that a test is warranted, an appointment for drive-thru testing in Joplin will be made.