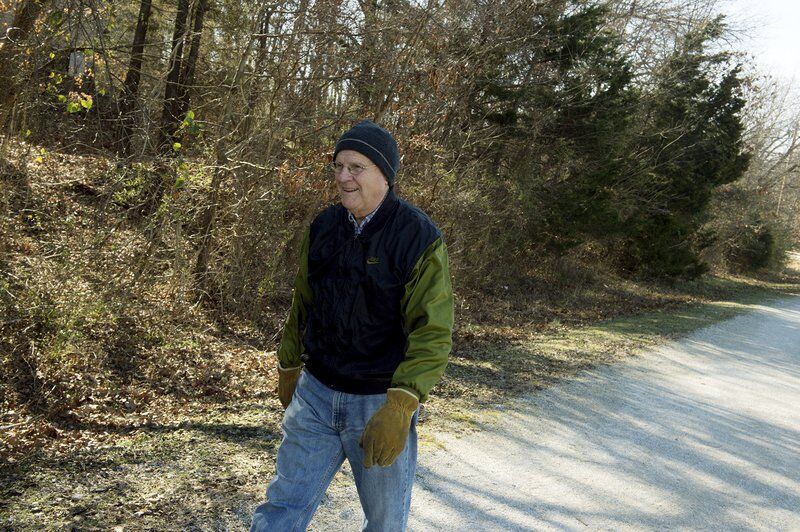 Rick Bushnell takes a walk along the Frisco Greenway Trail in Joplin on a recent sunny day. The Joplin Trails Coalition is seeking support in seeking a substantial grant that would be used to connect the Frisco to the Ruby Jack about 3 miles to the north of Webb City. The coalition also is seeking donations toward the 20% local match needed should it be awarded the $340,000 grant. GLOBE | ROGER NOMER 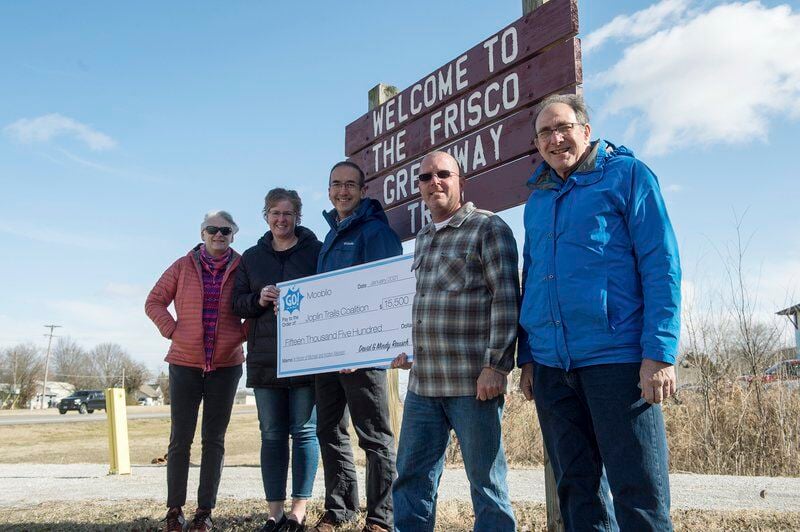 Presentation participants (from left) Debra Johnson, Kristen Atkinson, Mike Atkinson, Braden Horst and Bob Herbst display a check for $15,500 from David and Mindy Rausch, with a nonprofit called Mooblio, in honor of Michael and Kristen Atkinson to the Joplin Trails Coalition recently at the Frisco Trail in Webb City. GLOBE | ROGER NOMER

The Joplin Trails Coalition is pursuing a $340,000 grant that it would use for the first phase of a connection between the Frisco Greenway and Ruby Jack Trail, and it needs help from users to boost its chances of getting the money.

Braden Horst, coalition president, said the group needs "any and all" letters of support for the grant application, which is due Jan. 29.

"Whatever words people choose to use," he said.

The group also needs to raise money for its share of the match should it be awarded the grant.

The 3.5-mile Frisco Greenway begins in Joplin, on North Street, and crosses St. Louis Avenue and Zora Street as it makes its way north to Webb City, crossing Mount Hope and Fountain roads, and ultimately Missouri Highway 171. A lesser-used portion extends from Highway 171 to near the intersection of Madison and Broadway in Webb City.

There's about a 3-mile gap between that intersection and the Ruby Jack, which runs east-west for 14 miles between Carthage and Carl Junction.

Horst said Phase 1 of the connection would extend the Frisco farther north, have it circle around the east side of the Webb City High School campus, and continue north to an area of wetlands near Center Creek, much of which is rehabilitated mining land owned by the city of Webb City. Phase 2 would build a spur on the Ruby Jack running south through Oronogo to Center Creek. The final phase would be a bridge over the creek; Horst said the current bridge is too narrow for a bike lane.

"Twenty percent of that is a pretty good chunk of change for a small group like us," Horst said.

The Joplin Trails Coalition recently received a $15,500 donation from Missouri-based Mooblio, a nonprofit affiliated with Go! Curriculum, which develops materials for use in children's ministries.

However, because of COVID-19, the coalition had to cancel its two major fundraisers in 2020 — the Route 66 Mother Road Bicycle Tour, held in June, and the Maple Leaf Bicycle Tour, held each October. Horst said it is too early to know about the event this June.

He said letters of support can be sent to joplintrailscoalition@gmail.com or mailed to Joplin Trails Coalition, P.O. Box 2102, Joplin, MO 64803.

Membership dues are another way the coalition raises money, and the cost is $35 for an individual or family membership. The coalition has reported a 50% increase in paid memberships this year as well as more foot and bicycle traffic on the Ruby Jack and Frisco Greenway, which remained open during the pandemic. The group also opened a 2.7-mile stretch of the Ruby Jack in the summer of 2020.

To join the Joplin Trails Coalition and to learn more about fundraising events, workdays and more, go to joplintrailscoalition.org.