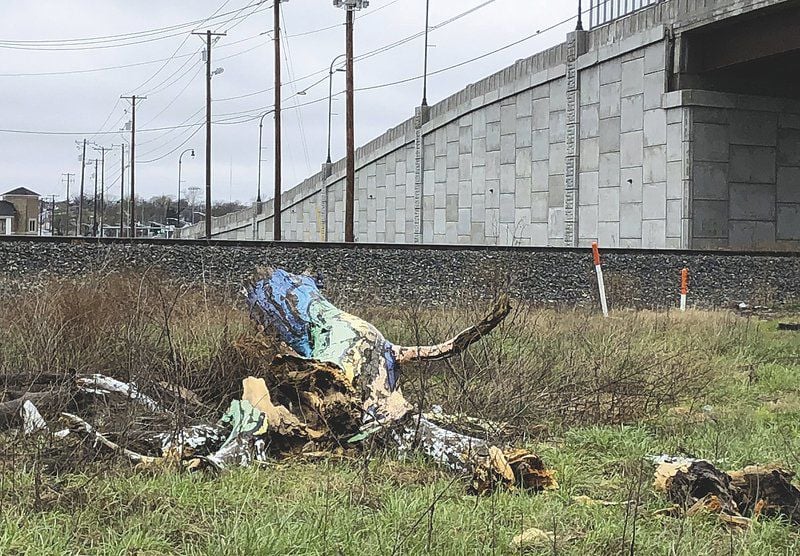 The Spirit Tree continues to decompose in pieces on Tuesday on the ground almost underneath the 20th Street overpass. Some Joplin residents are contemplating how to keep what has been a symbol of the town's tornado resiliency from being forgotten. GLOBE | EMILY YOUNKER 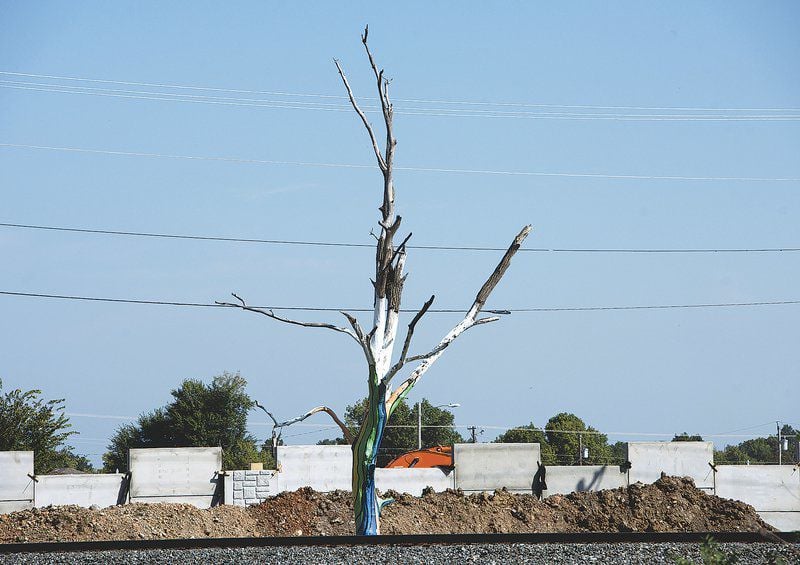 The Spirit Tree reaches toward the sky in 2015. Globe file | Roger Nomer

The Spirit Tree continues to decompose in pieces on Tuesday on the ground almost underneath the 20th Street overpass. Some Joplin residents are contemplating how to keep what has been a symbol of the town's tornado resiliency from being forgotten. GLOBE | EMILY YOUNKER

The Spirit Tree reaches toward the sky in 2015. Globe file | Roger Nomer

Nearly seven years after it first became a symbol of hope for the tornado-stricken Joplin community, the Spirit Tree has fallen.

But Doug Hunt wants to save it — not preserve it, exactly, but perhaps re-create it with a sculpture in a local park.

"I want to replicate what (the artists) did with whatever technology is available, and I believe the community will rally behind this," said Hunt, who owns a consulting firm in Joplin. "I'm also envisioning a plaque that would tell the story of (the artists) and their passion, and why the tree was painted."

The tree, located near the former Dillon's grocery store, was swathed in its iconic bright colors in connection with the first anniversary of the 2011 tornado by the Bilke family and artists from TANK: Public Art, a group that also helped with the "Butterfly Effect" mural at 15th and Main streets. It was selected for the project because of what it represented: an object that was still standing in the face of adversity.

“We just thought this tree was perfect,” Dolores Bilke told the Globe in May 2012. “Every aspect of this tree seemed perfect. It stands alone. Battered, but stately. It portrays the strength of Joplin.”

Hunt views the tree as a post-tornado symbol. He and some friends first noticed the tree and a few others like it on the night of May 22, 2011, as they helped with search-and-rescue efforts in the aftermath of the storm.

"One of the things that stuck out to me were the trees that had been debarked," he said. "It looked like bare hands trying to reach up out of the rubble, and it was such a powerful image for me."

The tree would never fully recuperate from the storm's destruction, although it continued to be a symbol for thousands of Joplin-area residents affected by the storm. The Joplin Memorial Run even took notice, having recently unveiled T-shirts and finisher medals for the 2018 races that prominently feature the Spirit Tree in their designs.

In recent years, the Spirit Tree began to fade. Once the 20th Street overpass was constructed in 2015-16, the tree, in its shadow, largely became hidden from view. Members of TANK: Public Art mulled moving it to a safer location, but the belief was the tree was too rotten to be uprooted.

So there it languished until a recent winter or spring storm apparently got the best of it.

Dolores Bilke said Tuesday that the tree’s demise was sad but expected. She had watched it deteriorate in harsh weather and become swamped with ants.

Her daughter, Ashley Bilke, said she’s intrigued by the possibility of giving the tree a second life.

“It’s something I’ve discussed with my mom before, about memorializing the tree somehow,” she said. “As special as it is to people, I think it’s a good possibility.”

So does Hunt. He's trying to form a committee that would explore options for a Spirit Tree sculpture, perhaps to be placed in Mercy Park, or to preserve part of the original tree in an airtight glass container to be displayed somewhere.

He's not yet sure how it will be accomplished, and there are still many people who were involved in the original creation of the Spirit Tree that he'd like to talk with, but he says he's committed to ensuring the tree's legacy won't be forgotten.

"The message of the Spirit Tree deserves to be preserved and respected," he said.

The other iconic post-tornado tree, the bird-feeder tree at 20th Street and Indiana Avenue, remains easily accessible to the public and is visited daily by its avian friends.

Forgive me getting a little too personal right now, but this year has been pretty crappy for me. Some of the worst things that can happen to p…