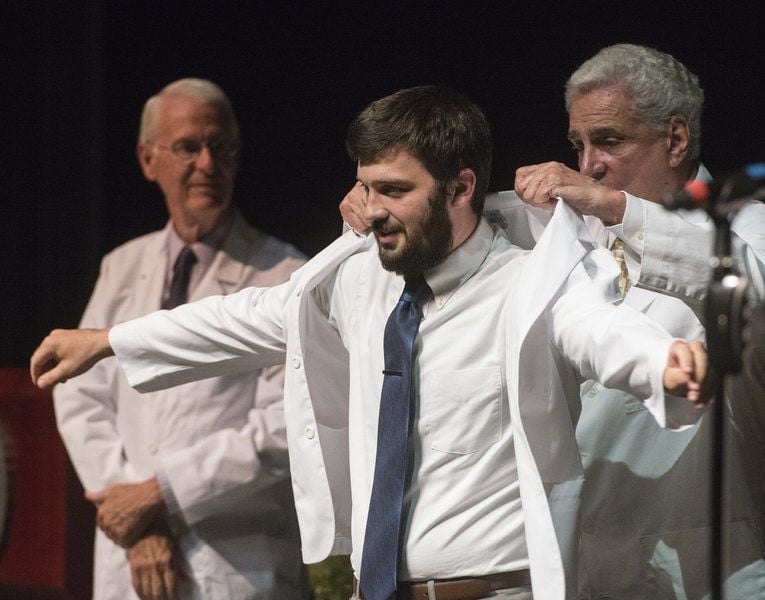 Zack Wages, of Joplin, receives his white coat from Ross Sciara during Monday's Kansas City University of Medicine and Biosciences white-coating ceremony. He and his fellow 161 students constitute the first class of the new medical school in Joplin. GLOBE | ROGER NOMER 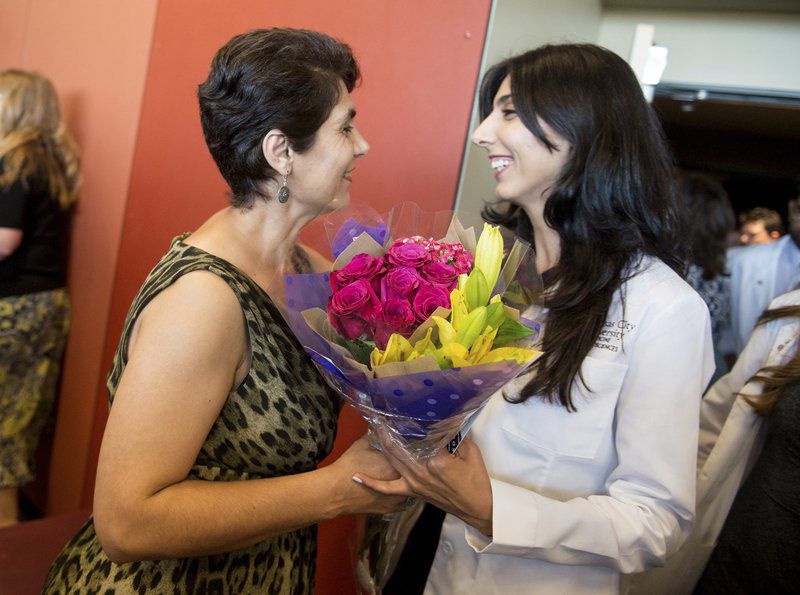 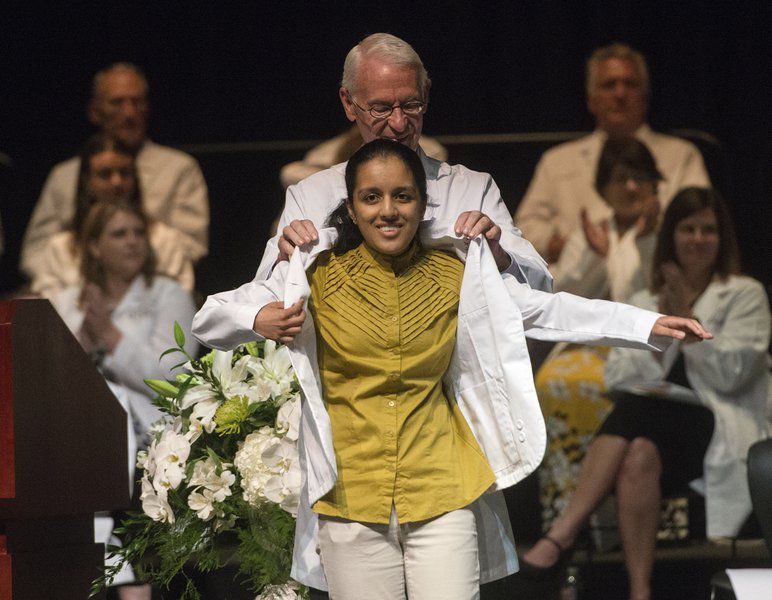 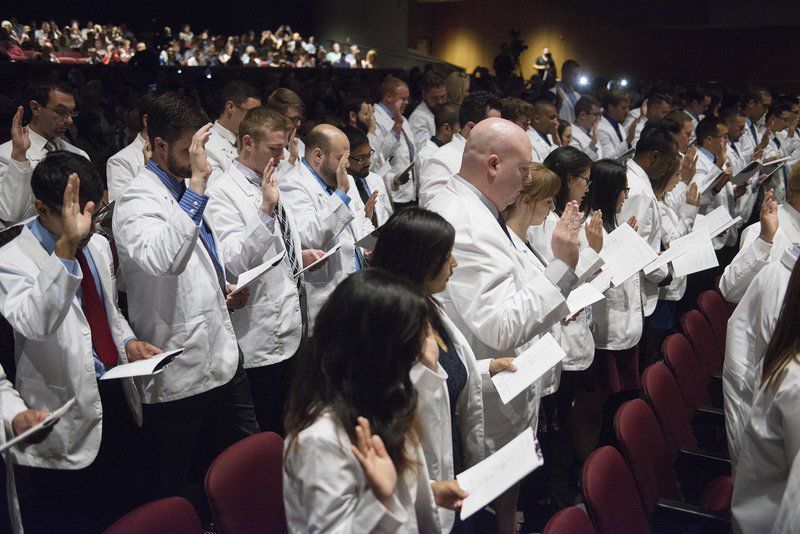 Student doctors,162 of them, recite the osteopathic oath on Monday during the Kansas City University of Medicine and Biosciences white-coating ceremony. The event for the new medical school in Joplin was put on at Joplin High School. GLOBE | ROGER NOMER 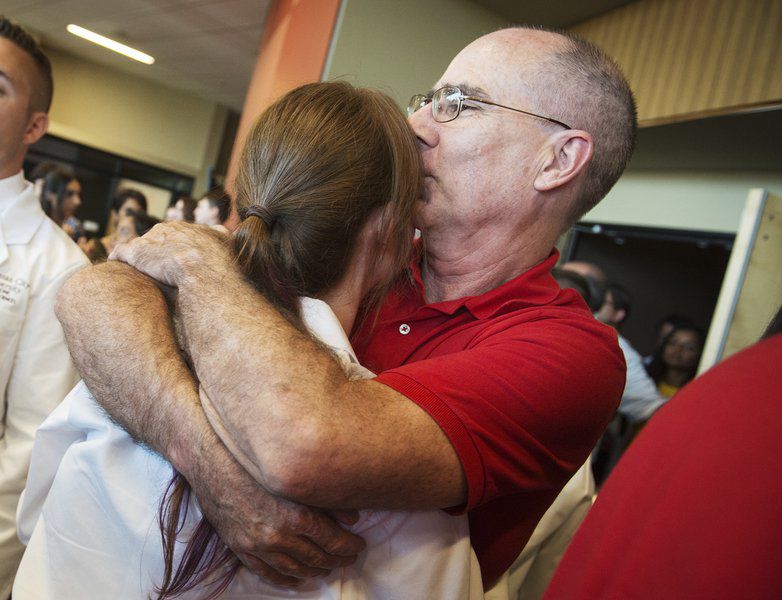 Zack Wages, of Joplin, receives his white coat from Ross Sciara during Monday's Kansas City University of Medicine and Biosciences white-coating ceremony. He and his fellow 161 students constitute the first class of the new medical school in Joplin. GLOBE | ROGER NOMER

Student doctors,162 of them, recite the osteopathic oath on Monday during the Kansas City University of Medicine and Biosciences white-coating ceremony. The event for the new medical school in Joplin was put on at Joplin High School. GLOBE | ROGER NOMER

For Kelly Thompson, the opportunity to finally receive her white physician’s coat Monday was “surreal.”

“I’ve been working toward this for the longest time, and it’s finally here,” she said.

The Indianapolis resident was one of 162 students who make up the inaugural class of the new Joplin campus of the Kansas City University of Medicine and Biosciences. The class of 2021 took part Monday in a formal "white-coating" ceremony to mark the start of their four-year journey through medical school.

Paula Gregory, dean of the Joplin campus, said the white coats are a way for students to share the traditions of medicine as well as a means of staying connected with the school and the community.

“The white coat is a symbol of a doctor, a person who teaches, advises and is privileged to know the inner workings of a patient’s life,” she said during the ceremony, which took place at Joplin High School. “It is the accomplishment of becoming a true medical student.”

Marc Hahn, president of KCU, told class members that they will set the example for future generations of medical students who will follow them through KCU Joplin. The campus has a mission of educating future health care providers that can practice in underserved and rural areas of the country.

“To the class of 2021: You are pioneers in a new era of medical education, one that will make a difference in meeting the medical and rural health needs of Southwest Missouri, this region and the nation,” he said.

The class is representative of a wide swath of the United States, with students coming from California, New York and nearly everywhere in between. The international scene is also represented, with students hailing from Canada, Singapore, South Korea, Syria, Russia, Italy, Iraq and Lebanon.

Many students come from the middle part of the country, from as far south as Texas and as far north as Michigan and Wisconsin. A large portion come from more regional areas, including Missouri, Kansas, Oklahoma and Arkansas.

And local applicants were not overlooked. A handful of students come from the Joplin area, with at least nine being graduates of Missouri Southern State University and two coming from Pittsburg (Kansas) State University.

Harmeet Kaur, from Stoney Creek, Ontario, applied to both the Kansas City and Joplin campuses of KCU after researching the school online. She said she was happy to be accepted to the inaugural Joplin class.

“I was very excited because it’s a new school, and there are more opportunities to start new things, like clubs and activities,” she said. “I felt like (KCU Joplin) would be the best school to give me the best education as a physician.”

Kaur said she also was ecstatic to receive her official white coat.

“This is something I’ve waited many years for,” she said.

Nathan Field, from Spokane, Washington, said it “felt right” when he received his acceptance letter from KCU Joplin.

“I had a couple of options (for medical school), and this one, I knew it was well thought of and that I’d get the education I wanted,” he said.

Dressed afterward in his white coat, Field said the ceremony could mean only one thing — “I guess now it means it’s time to go to work,” he said.

A second white-coating ceremony, for incoming students of the Kansas City campus, will be held Saturday.