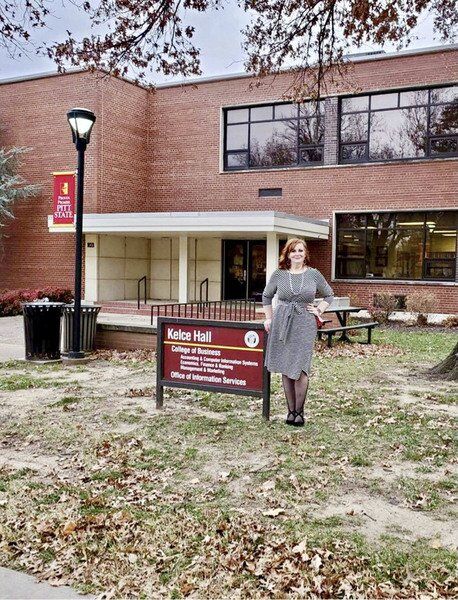 Kimberly Ross poses outside Kelce Hall at Pittsburg State University, where Friday she graduated graduated along with her husband, Joey Ross. Both say they attended PSU out of high school, but were not ready to focus on the task at the time. They went back to college 31/2 years ago. COURTESY | KIMBERLY ROSS 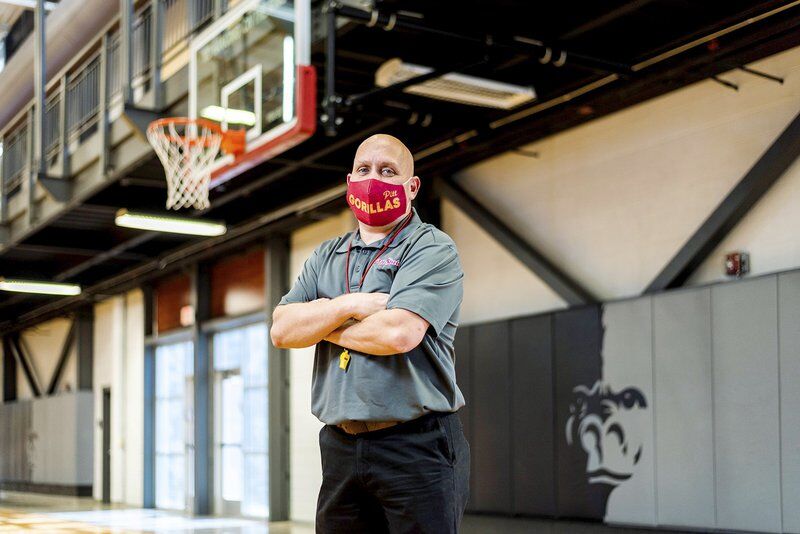 Joey Ross poses ahead of his graduation Friday from Pittsburg State Unversity. He said he has always wanted to teach physical education. He said he, with his teaching degree, will start a PE job at Liberal, Missouri. COURTESY | SAM CLAUSEN

Kimberly Ross poses outside Kelce Hall at Pittsburg State University, where Friday she graduated graduated along with her husband, Joey Ross. Both say they attended PSU out of high school, but were not ready to focus on the task at the time. They went back to college 31/2 years ago. COURTESY | KIMBERLY ROSS

Joey Ross poses ahead of his graduation Friday from Pittsburg State Unversity. He said he has always wanted to teach physical education. He said he, with his teaching degree, will start a PE job at Liberal, Missouri. COURTESY | SAM CLAUSEN

PITTSBURG, Kan. — Instead of cheering from afar, married couple Joey and Kimberly Ross, of Lamar, Missouri, were able to walk together during their graduation ceremonies Friday at Pittsburg State University and will begin their new jobs on Nov. 30.

Joey, 44, and Kimberly, 41, said Friday morning that they’ve been waiting for this moment for two decades.

“It was a long journey,” Joey Ross said a few hours before walking across the stage. “I waited 25 years for this. I’m not really nervous, yet. I’m just really happy and excited I get to share this day with my wife, and my family will be there. It’s going to be a good day.”

PSU’s commencement took extra precautions this year because of COVID-19 with a plan that included a walk-thru ceremony and limited guests. Kimberly and Joey had the opportunity to walk together, as well as with their families.

“It’s pretty special that they get to walk with us,” said Kimberly.

After 17 years of marriage, they decided it was time to return to college to earn their bachelor's degrees. Joey was studying physical education at PSU but was academically dismissed in 1996. Kim had left PSU in 1998, and the two ended up meeting shortly after.

Since he was 18, Joey always knew he wanted to be a PE teacher, ever since he was inspired by his high school baseball coach and role model, William Mallatt. But he said he lacked motivation and dropped out of PSU after a year.

“I was pretty immature, and I didn’t take college seriously,” said Joey Ross. “Right after, I went into the workforce and raised a family. They’re pretty much grown, so in 2017, we both went back. We both finished in 3 1/2 years.”

The couple met while working at an outsourcing company called Digital Lighthouse in Fort Scott. They have two children — Jesse, 23, and Alyssa, 20, who attended their graduation ceremony. Alyssa is currently studying teaching at Crowder College in Webb City.

“We were both hired as financial representatives, and we didn’t know each other until a year after we worked there,” said Kimberly about how she met Joey.

Joey graduated Friday from the College of Education with a 3.5 GPA. While attending PSU, he has been coaching at Southeast High School in Crawford County, from which he graduated in 1995. He was able to complete his coursework early and has been focusing on student teaching PE at Liberal, Missouri, for the past few months. He also works full time as a health insurance processor but has accepted a new teaching job.

“I’ve coached six years there ...,” said Joey Ross. “I’ve coached the last three years in football except for this year because I have to student teach. But I got to coach my son wrestling his senior year, too, so it’s been very special. I’ve already accepted a job to teach at a middle school in Galesburg. I start Nov. 30, so I’ll be going right away.”

Joey said if he learned anything from this experience, it’s to never give up, especially on yourself.

“If you want something bad enough, then you can go get it,” he said. “The opportunities are there for everyone, but you just have to do it.”

Kimberly said her story is similar to Joey’s. She attended PSU straight out of high school after graduating in 1997 in Nevada, Missouri. She wasn’t serious about school at the time either and was living off campus, working full time and struggling to pay bills.

“It was hard to balance that, and I just wasn’t ready,” she said. “When I went back in 2017, I was definitely more focused and more serious about school. I had lots of life experience under my belt this time around. It was intimidating, but it’s never too late. If you want something bad enough, you just have to do it.”

“We were really focused on getting school done,” said Kimberly.

Kimberly graduated from the Kelce College of Business, where she earned a bachelor’s degree in computer information systems. She’s now accepted a job with Jack Henry & Associates in Monett, Missouri, as a programmer analyst and also starts on Nov. 30.

Missouri Southern State University will also host a walk-thru graduation as a result of the coronavirus pandemic.

Graduating seniors from the spring, summer and fall semester will be able to select a time slot and sign up for one of two commencement sessions. They are set for 3 to 7 p.m. Friday, Dec. 11, and from 2 to 6 p.m. Saturday, Dec. 12, in the Leggett & Platt Athletic Center at MSSU.

Students will be able to bring up to eight guests. For those who can't attend in person, KGCS-TV, which operates as a service of the university's communication department, will offer a live telecast and stream of the ceremonies. Programming can be seen on Channel 21 and on regional cable television systems.

• 9 a.m.: graduate students in all colleges.

• 10:30 a.m.: spring/summer undergraduates and graduates in College of Arts and Sciences and Kelce College of Business.

• Noon: spring/summer undergraduates and graduates in College of Education and College of Technology.

Photographers will be stationed with proper distancing, and the ceremonies will be streamed at pittstate.tv for those who prefer or cannot be in attendance.

Spring 2020 nursing graduates from the Irene Ransom School of Nursing will participate in the school’s traditional pinning ceremony following their college’s ceremony at 10:30 a.m. They’ll then immediately walk to McPherson Hall and will be allowed two guests for the walk-thru ceremony. Faculty ushers will be positioned every 10 feet to guide them. If weather is favorable, the ceremony will be held outdoors on the building’s patio.