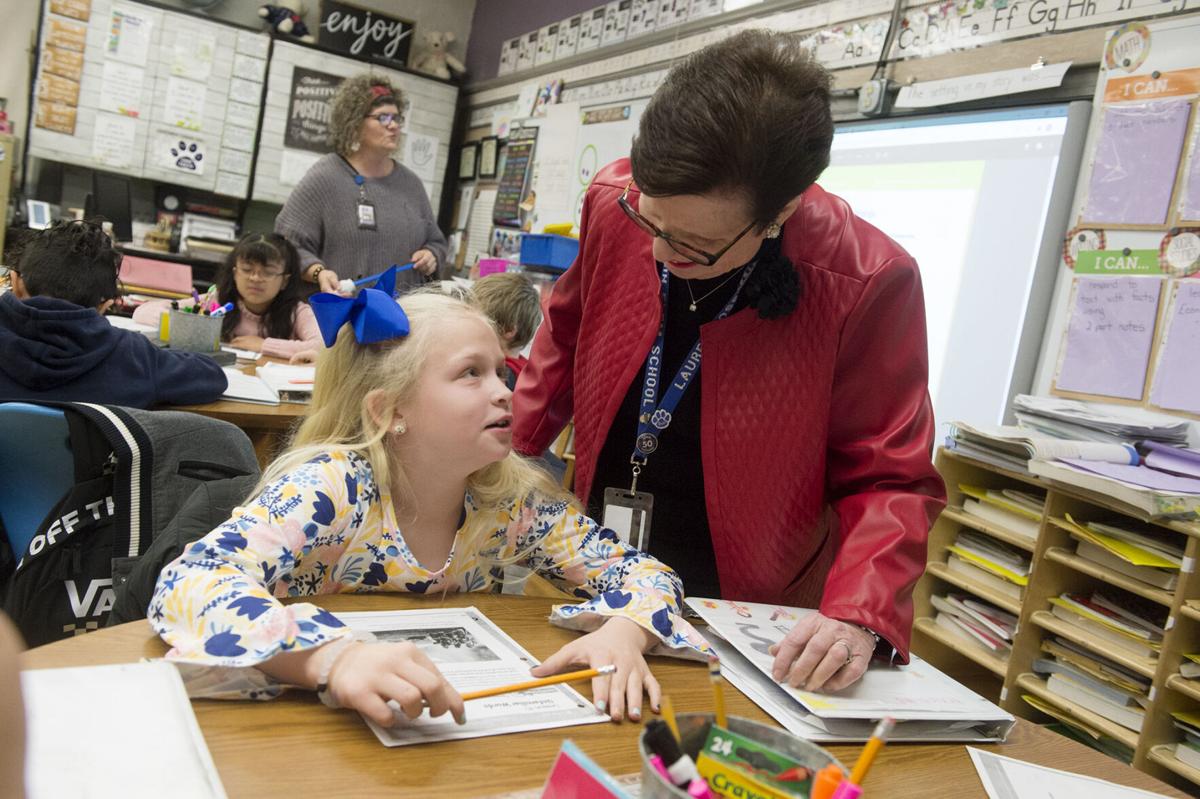 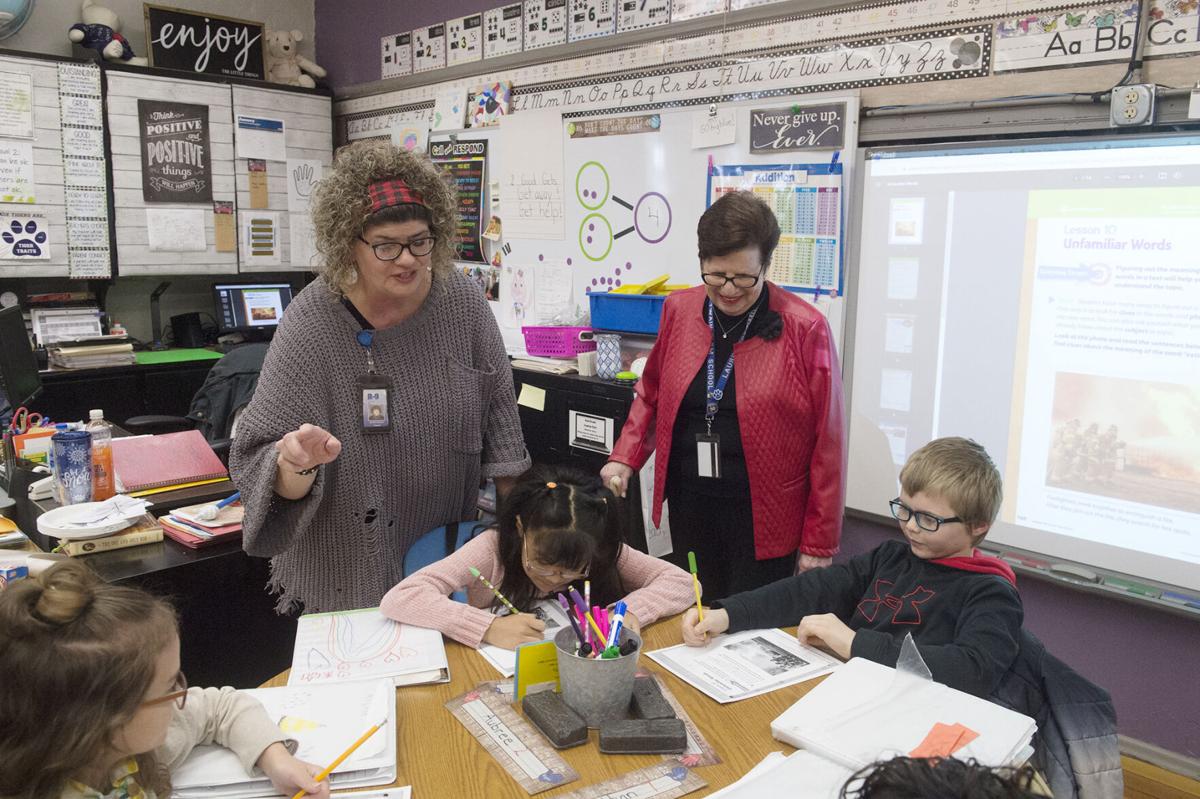 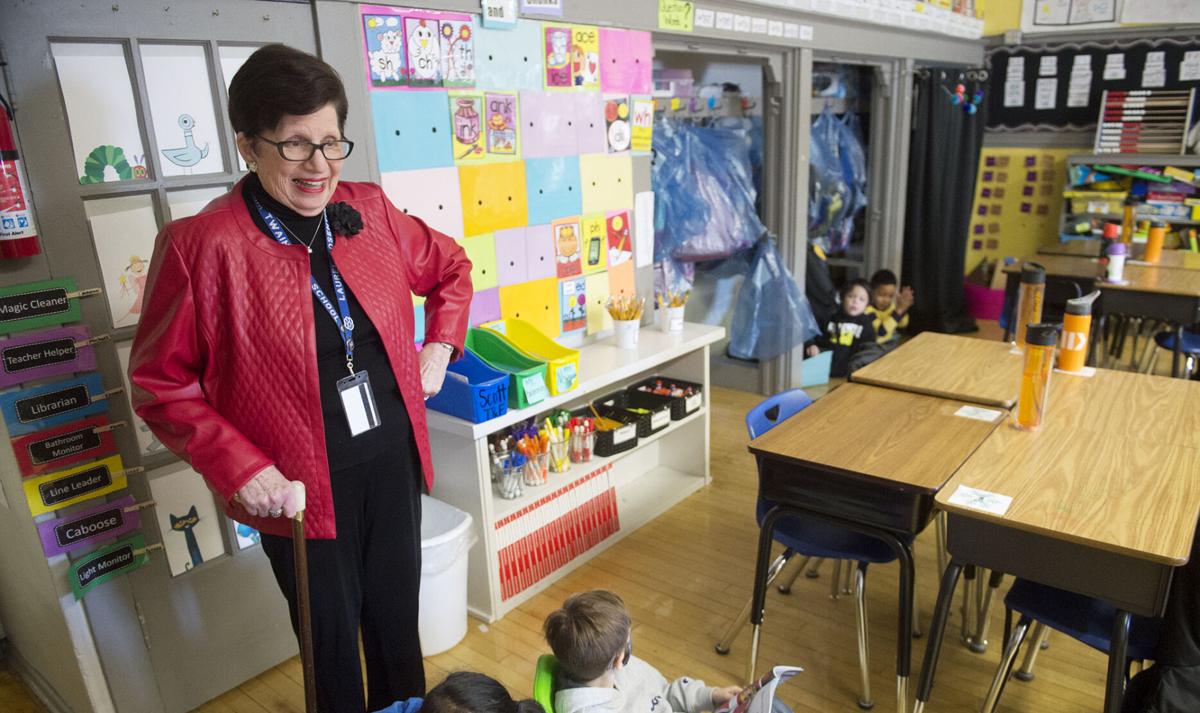 Laurel Rosenthal visits the classroom where she started teaching at Mark Twain Elementary in Carthage. 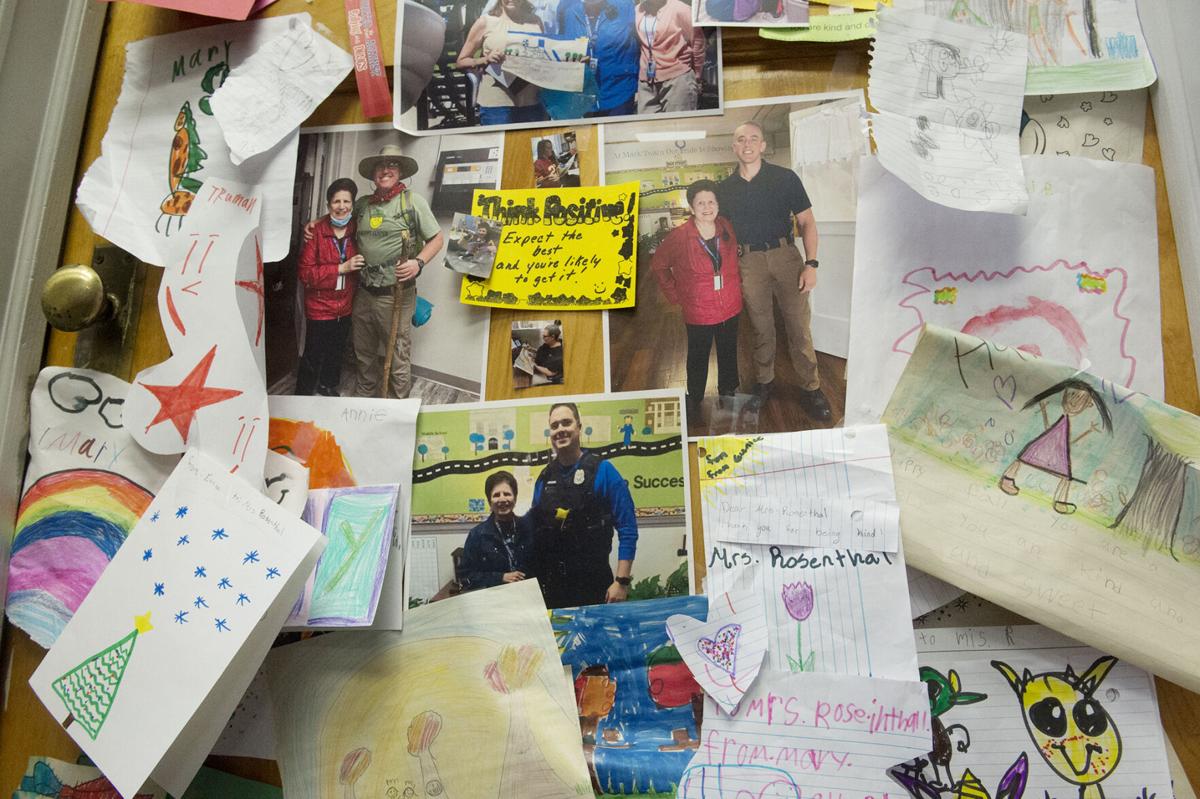 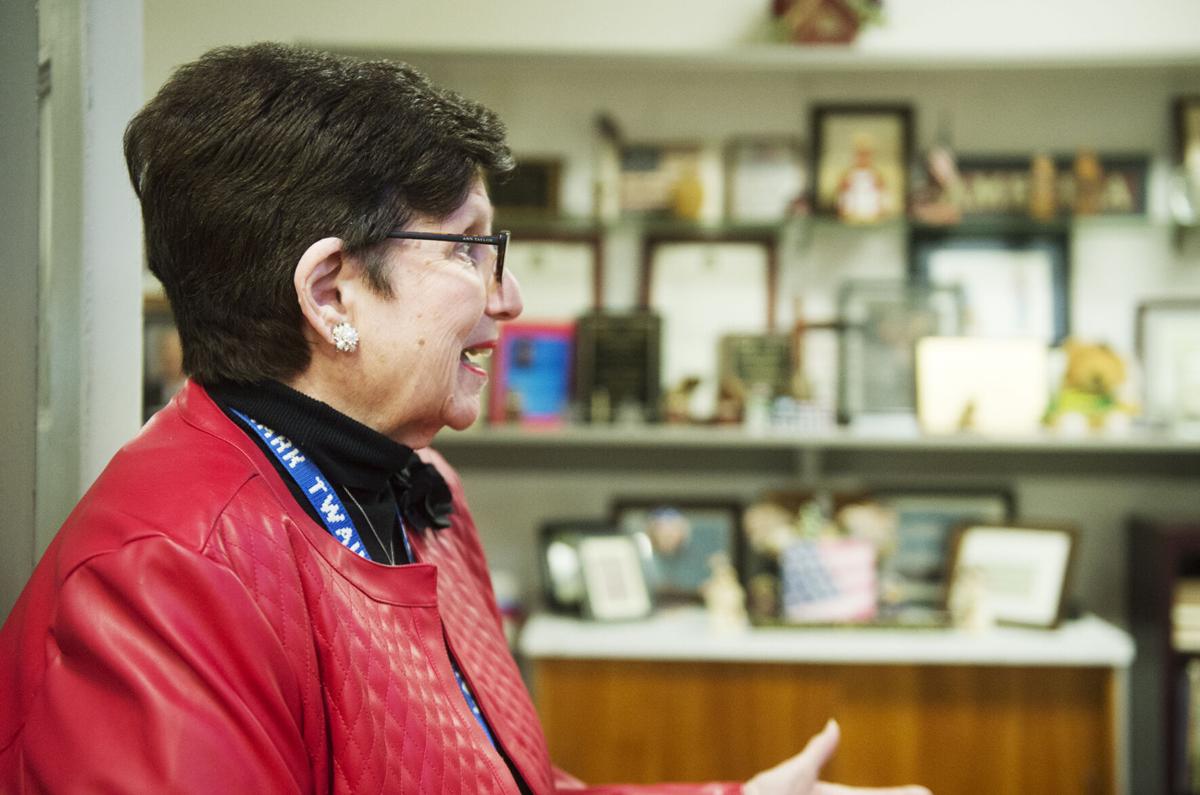 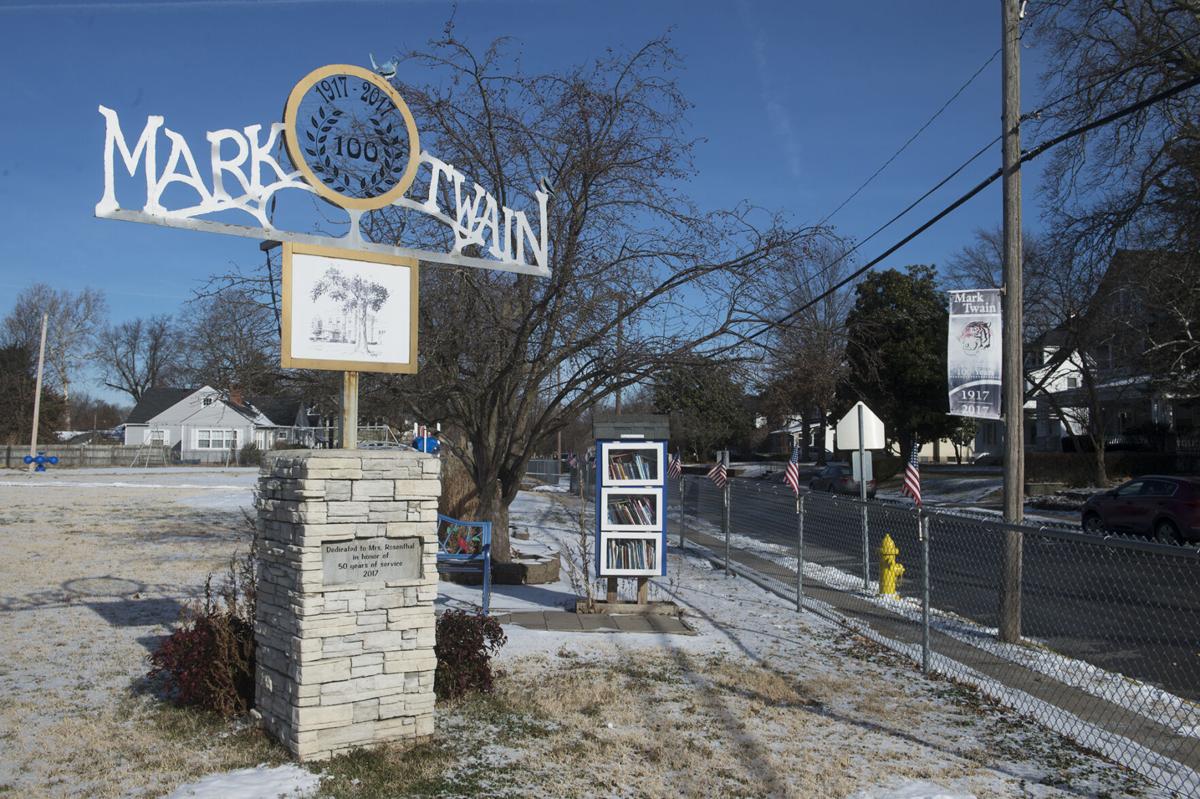 CARTHAGE, Mo. — For more than half of its 105-year existence, Laurel Rosenthal has been a fixture in the classrooms and hallways at Mark Twain Elementary School, encouraging students and teachers.

The inevitable occurred recently when Rosenthal announced she is retiring after a career at the school that included teaching kindergarten for 21 years, then serving as principal for 34 years.

Jennifer Simpson, who was in Rosenthal’s kindergarten class in 1975 and is now a second grade teacher at Mark Twain, said everyone who has passed through the school was inspired by Rosenthal.

“We all got a little spark of Mrs. Rosenthal and her continuing education,” Simpson said. “We all got that little piece of her in us that I wish everyone in the world could have because she’s a phenomenal lady.”

Bridget Triplett, a third grade teacher at Mark Twain for the past 15 years, whose children passed through the school before she came there as a teacher, said it was an emotional faculty meeting Jan. 3 when Rosenthal told the staff she was leaving at the end of the year.

“It brought tears to my eyes. It kind of broke my heart,” Triplett said. “None of us are ready for it because she is Mark Twain, she just is Mark Twain. That last day is going to be tearful for sure, and we’ll be really hopeful that we’ll still get to see her some. But it’s definitely an end of an era for sure. Things won’t be the same. They’ll be good, but they won’t be the same.”

“Laurel is a special person and educator,” Baker said. “Her longevity shows how much she loves kids, teachers and Mark Twain school. Her focus regarding patriotism is very inspiring.”

Rosenthal helped start the kindergarten program at Mark Twain in 1967, at a time when most children started school in the first grade. Her oldest child, Scott, was in the second grade when the principal at the time told Rosenthal she should consider being a teacher.

She said voters had rejected a property tax levy to put kindergarten in Mark Twain on a number of occasions, so she didn’t expect approval when then-Superintendent Charles Johnson asked her to become a teacher.

“I said, here’s what I’ll do — if it passes, and I knew it wasn’t going to pass, I will put in kindergarten at Mark Twain,” Rosenthal said. “But if it failed, you won’t have to give me a job because I don’t want to work until my youngest is in school. Well, of course it passed, and there I was, teaching my first year with my own child in my class.”

Rosenthal said that first class of kindergartners graduated from Carthage High School in 1980.

“They’re 60 years old now, and I’m very proud of them,” Rosenthal said. “I’m proud that through the years we’ve had an astronaut, Janet Kavandi — I didn’t have her in kindergarten, but she started here, then she moved to another home and transferred to Fairview school. I’ve had professional athletes, I’ve had doctors, I’ve had lawyers, political leaders, (state Rep.) Cody Smith, political people, but I’ve had people who just have ordinary jobs who do great and mothers who stay at home. The big difference between now and when I started, mothers stayed home and didn’t work. Now the mother has to work in this society to get along.”

Simpson, a kindergartner in Rosenthal’s class during her eighth year as a teacher, said she still recalls the way Rosenthal handled her classes and that she’s modeled her teaching on that.

“I was so fortunate to have her,” Simpson said. “All my teachers at Mark Twain were like that. ... I felt like they were a huge part of my life, that’s why I’m a teacher, because I wanted to do that with my kids. My daughters got to come here, my brother and sister both had Mrs. Rosenthal, I got to tell them when they were in kindergarten, ‘Oh, you’re going to love kindergarten.’ ”

Rosenthal has received a plethora of awards and accolades while working as an administrator and educator at Mark Twain Elementary School, including the R-9 Golden Key Award for Outstanding Administrator, the Outstanding Principal of Southwest Missouri Award, the Judge Clay Cowgill Blair Award for Outstanding Teacher and the Carthage Chamber of Commerce Citizen of the Year award in 2009.

She was honored by the Carthage Soroptimist International with the group’s Making a Difference for Women Award in 2019. She was also grand marshal of the Carthage Maple Leaf Parade in 2013, was one of 12 Distinguished Missouri Elementary Principals in 2000 and was inducted into the Hall of Carthage Heroes in 2014. In 2018, she was named a Pioneer in Education by the Missouri Department of Education.

She also was grand marshal of the Independence Day parade in Carthage’s Belle Air neighborhood every year for more than a decade.

“I’ve gotten so many lovely honors through the district and through the city, and it’s very rewarding, but I always felt it wasn’t for me. It was for Mark Twain,” Rosenthal said. “And that I represented the students and the staff and the parents of Mark Twain.”