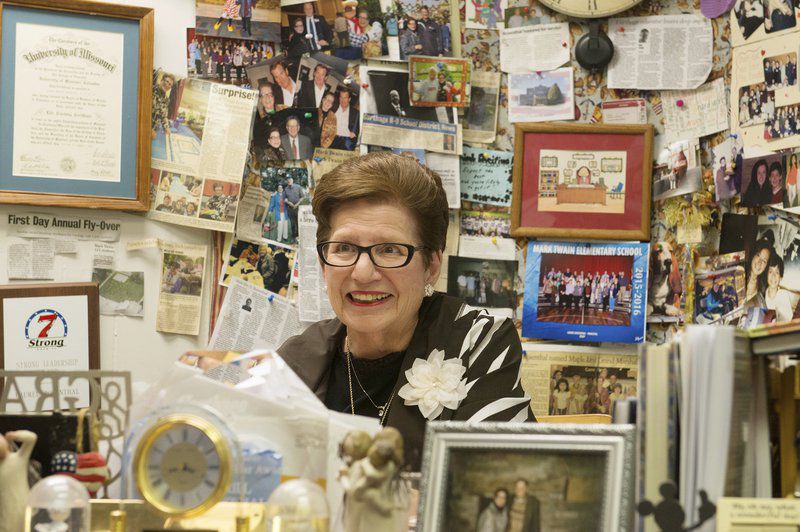 The walls of Laurel Rosenthal's office are lined with mementos from her 50 years at Mark Twain Elementary School in Carthage. Globe | Roger Nomer 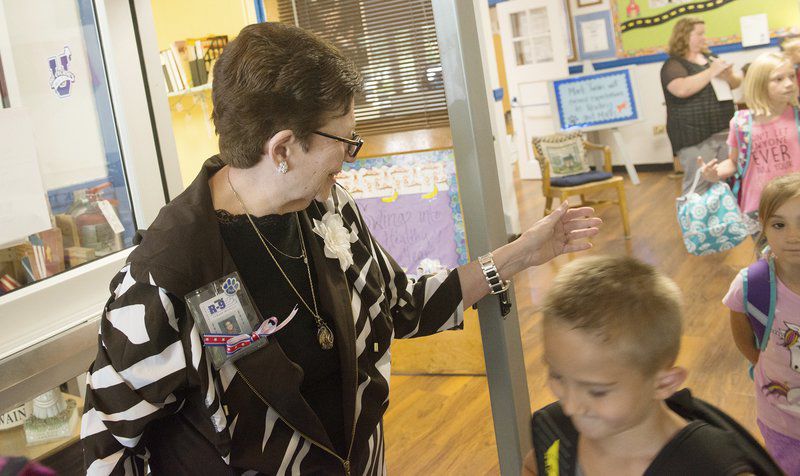 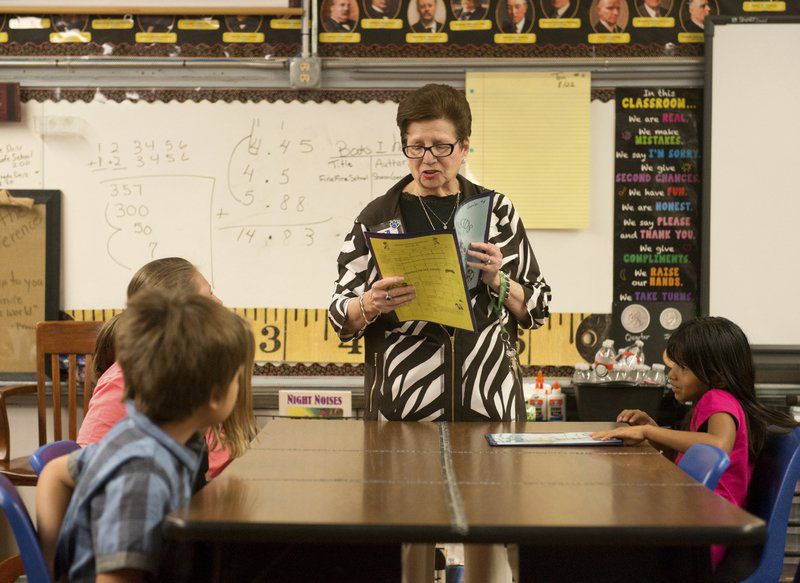 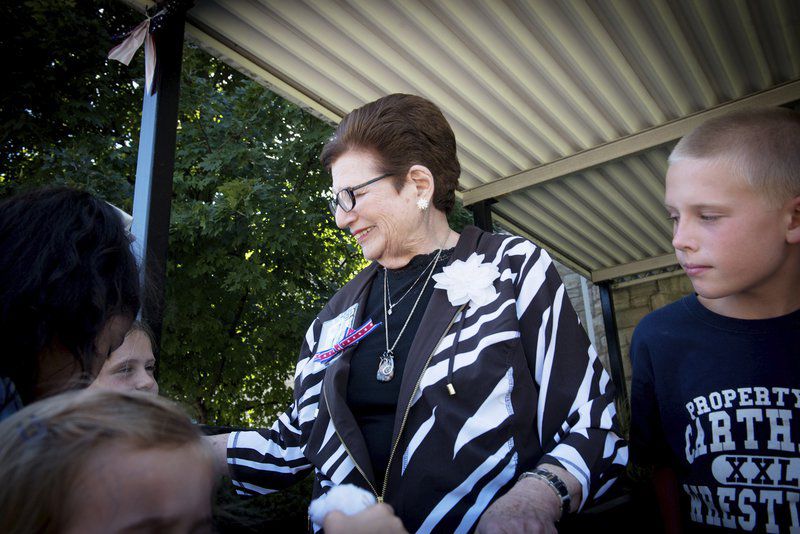 The walls of Laurel Rosenthal's office are lined with mementos from her 50 years at Mark Twain Elementary School in Carthage. Globe | Roger Nomer

CARTHAGE, Mo. — Principal Laurel Rosenthal does not let a person pass her by at Mark Twain Elementary School without a greeting.

“Did you have a good day?” she asks one person.

“Nice earrings," she tells another.

Some students simply hug her.

It's a scene you could expect to find at Mark Twain this morning as well as 50 years ago.

This school year at Mark Twain marks a half-century of Rosenthal's leadership at that school — 21 years as a kindergarten teacher, 29 years as principal. It's more than 8,000 school days and countless sing-along renditions of American patriotic standards.

In her 50 years at Mark Twain, Rosenthal has left a powerful imprint on the school and the community, according to former students, some of whom have children who also attended there.

"The thing that makes Mark Twain special is Mrs. Rosenthal,” said Lee Elliff Pound, a member of the Carthage Board of Education.

“She expects respect and gives respect and that sets the tone for the entire school,” Elliff Pound said. “And every monthly assembly is exactly the same.”

Rosenthal has been there for half the life of Mark Twain Elementary School, which will celebrate its 100th anniversary this March. Rosenthal prides herself on keeping consistency in the last remaining “neighborhood” school in the Carthage School District.

Some of her former students have, like Rosenthal, become educators.

Jennifer Simpson, now a second grade teacher at Mark Twain, had Rosenthal for kindergarten. After teaching at Mark Twain for 24 years, she says Rosenthal's presence still has the capacity to remind her of her own time at the school.

“I remember walking up the stairs behind her as a little girl,” she said. “She wore heels back then."

Though the dress has changed, Simpson said Rosenthal's support — and high expectations — have been a constant over her years of teaching.

Rosenthal knew early on that she would grow up to be an educator.

“My first day in kindergarten I got to pass out pencils,” she said. “I decided that was very important. I liked being in charge of something, and from then on I liked school.”

That kindergarten teacher was the first of many educators who recognized Rosenthal's capacity to manage a classroom, but she was not the only one in the K-8 building to notice it back then. When Rosenthal was in the fifth grade, the principal called her to her office and asked if she would watch over several classrooms while the teachers were in a meeting.

“So at an early age — fifth grade, sixth grade, seventh grade — I began to be at the head of a classroom. I really loved that, and from then on I wanted to be a teacher,” she said.

Rosenthal attended the University of Missouri at Columbia, where she received her undergraduate degree in education, the first of four degrees she would eventually receive in elementary school education and administration.

In Columbia, she met her husband, Malcom Rosenthal, a Carthage resident who had also attended Mark Twain. After they were married, the couple moved back to his hometown. Keen as she was to begin teaching, Rosenthal wanted to hold off until their children were older.

The year was 1966 and Mark Twain Elementary did not have a kindergarten. Voters had rejected four consecutive tax issues to expand the school to include one. A fifth levy was on the ballot, and Rosenthal, expecting more of the same, told the superintendent at the time that she would start working when the voters changed their minds.

To her surprise, the levy passed.

Laurel Rosenthal's teaching career began in tandem with the kindergarten at Mark Twain. Her son was in her first kindergarten class.

'Our own little world'

She was a kindergarten teacher for 21 years, most of them spent in a classroom upstairs that holds fond memories for a generation of Mark Twain alumni.

“We thought the upstairs was really special,” said Shelley Wilson, now a school counselor at Carthage High School in her 17th year with the district. “There was a boys' and girls' bathroom in that classroom so we didn't have to go up or downstairs to use the restroom and we had the whole upstairs to ourselves. That kindergarten area up there was its own little world.

"I had a wonderful experience in elementary school at Mark Twain, and part of that was due to Mrs. Rosenthal,” said Wilson, who applied for a boundary exception in order to get her daughter into Mark Twain. “I thought if I could get my daughters even part of that experience it was worth requesting.”

When Rosenthal was in the classroom, others encouraged her to become a principal herself. She joined a group of teachers from Mark Twain who set out from the school in the evenings to take night classes at Pittsburg (Kansas) State University, where she earned master's degrees in education and in elementary administration, and a specialist degree in elementary administration.

She was hired as principal by the same superintendent who hired her as a teacher.

“I loved being in the classroom as a teacher, and I'm in the classroom every day as a principal,” she said. “It was a transition because all of a sudden I was the one who was evaluating (the teachers). But I just had to say, 'Well, I'm the same person, but I'm on the other side.'”

In one sense, Rosenthal did not leave her classroom at all — she expanded it. Hallways in Mark Twain are decorated with art, books and stuffed animals that originally decorated her classroom. She enters each classroom as if it were her own, and the teachers and students are not surprised to see her.

This is her home and her family, she says. She twice turned down offers to be a principal at larger schools in the Carthage district.

Rosenthal also says she has no immediate plans to leave the job she loves.

“I'm not looking forward to anything but what I'm doing now. The minute I walk into this school every morning — and I come in at 6:30 every morning — I feel that same excitement as I did when I walked in my very first day. That doesn't happen to many people and I know how lucky I am. As long as my health is good and I'm doing a good job with the staff and the students I know I'm good.”

Laurel Rosenthal has consistently proved she's willing to experiment in order to bring new resources into her school. Early in her career as a principal she was offered a chance to participate in a program that would provide the school with a library in a trailer.

“I thought, well I’d like to be a pilot in anything,” she said of her decision to join the program. At the time, books at Mark Twain were kept in classrooms. The trailer still houses the school’s library.

Rosenthal helped her school become the first in Missouri to join the No Excuses University Network of Schools, a nationwide group of schools that prize an explicit focus on readiness for life after school. Each classroom at Mark Twain is emblazoned with the logo of a local university, and teachers are instructed to talk with the elementary school students about their hopes for the future. The entire Carthage School District has since joined the Network.