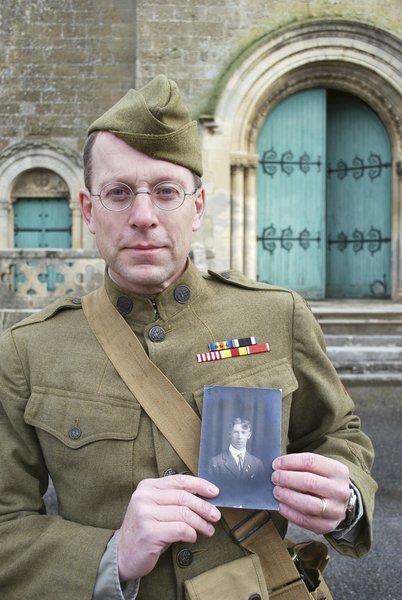 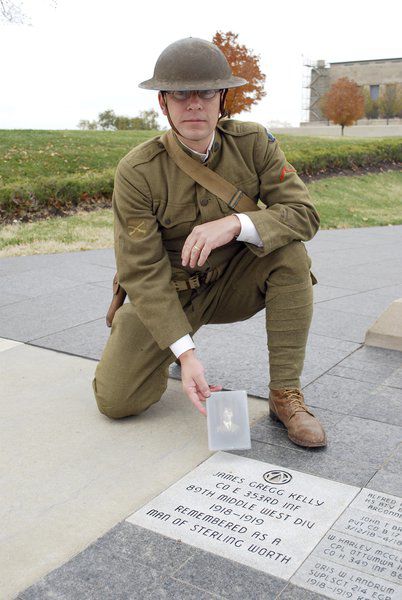 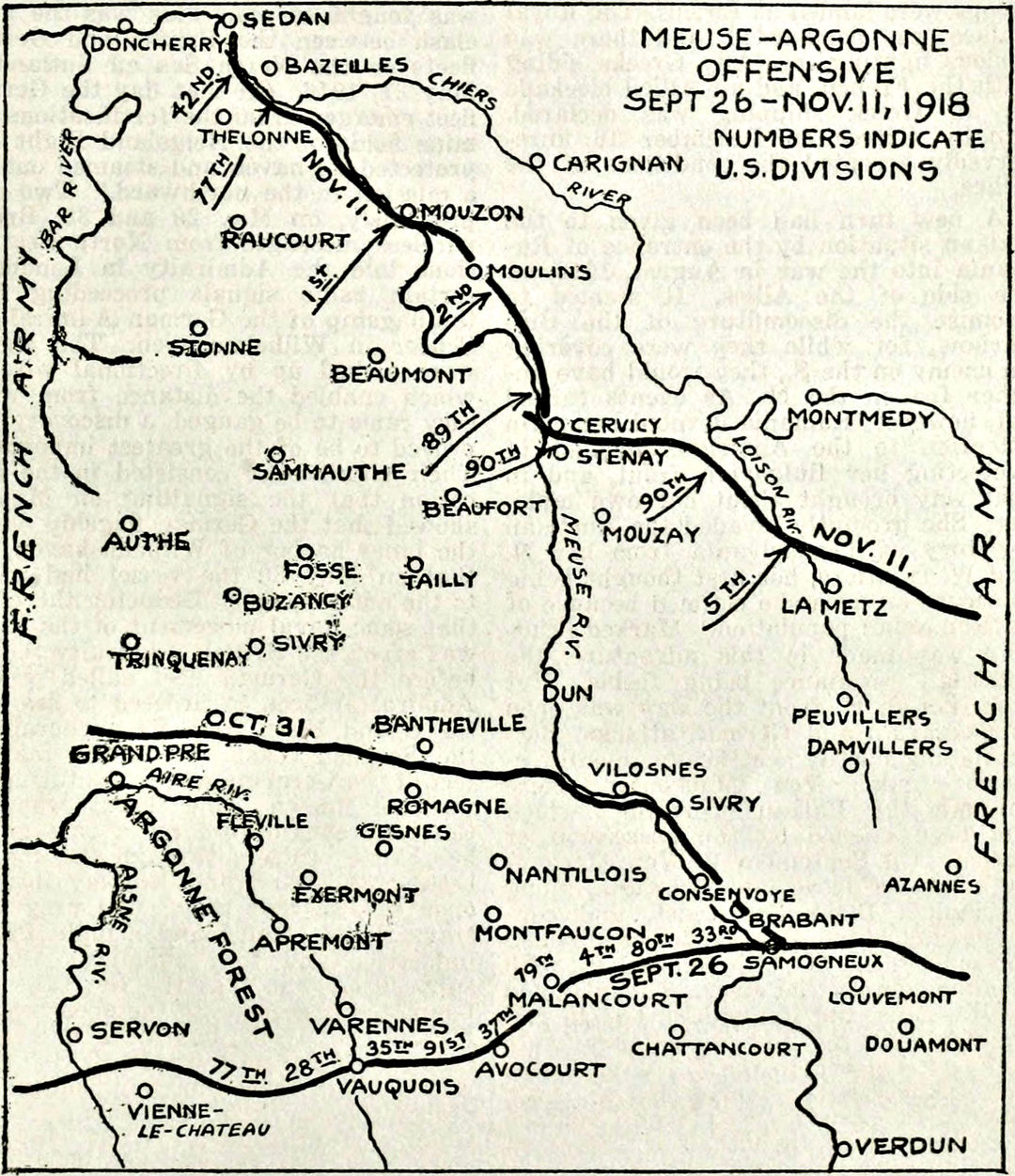 Map showing the battle lines and identifiers for the American divisions involved in the Meuse-Argonne offensive from September 26 - November 11, 1918, during World War I. 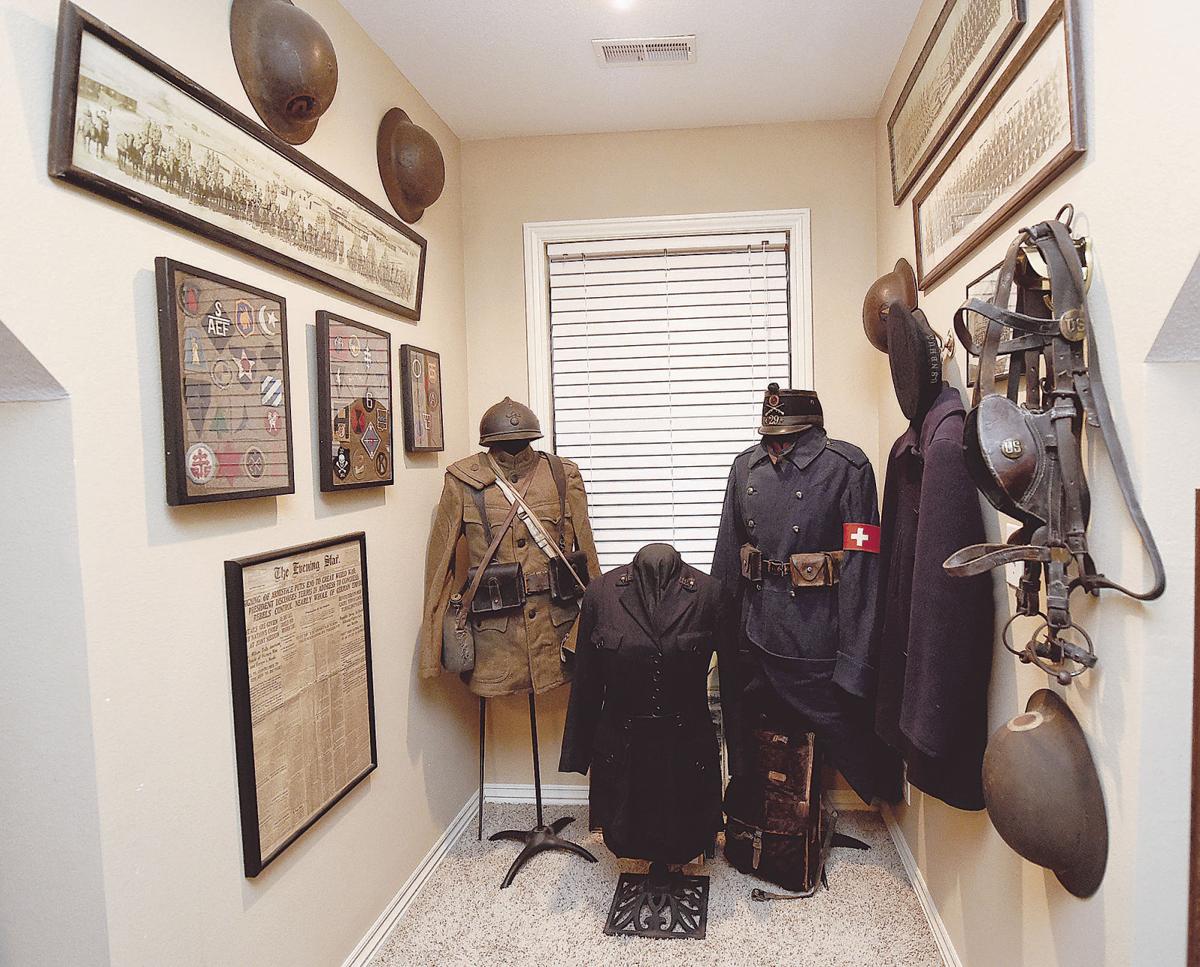 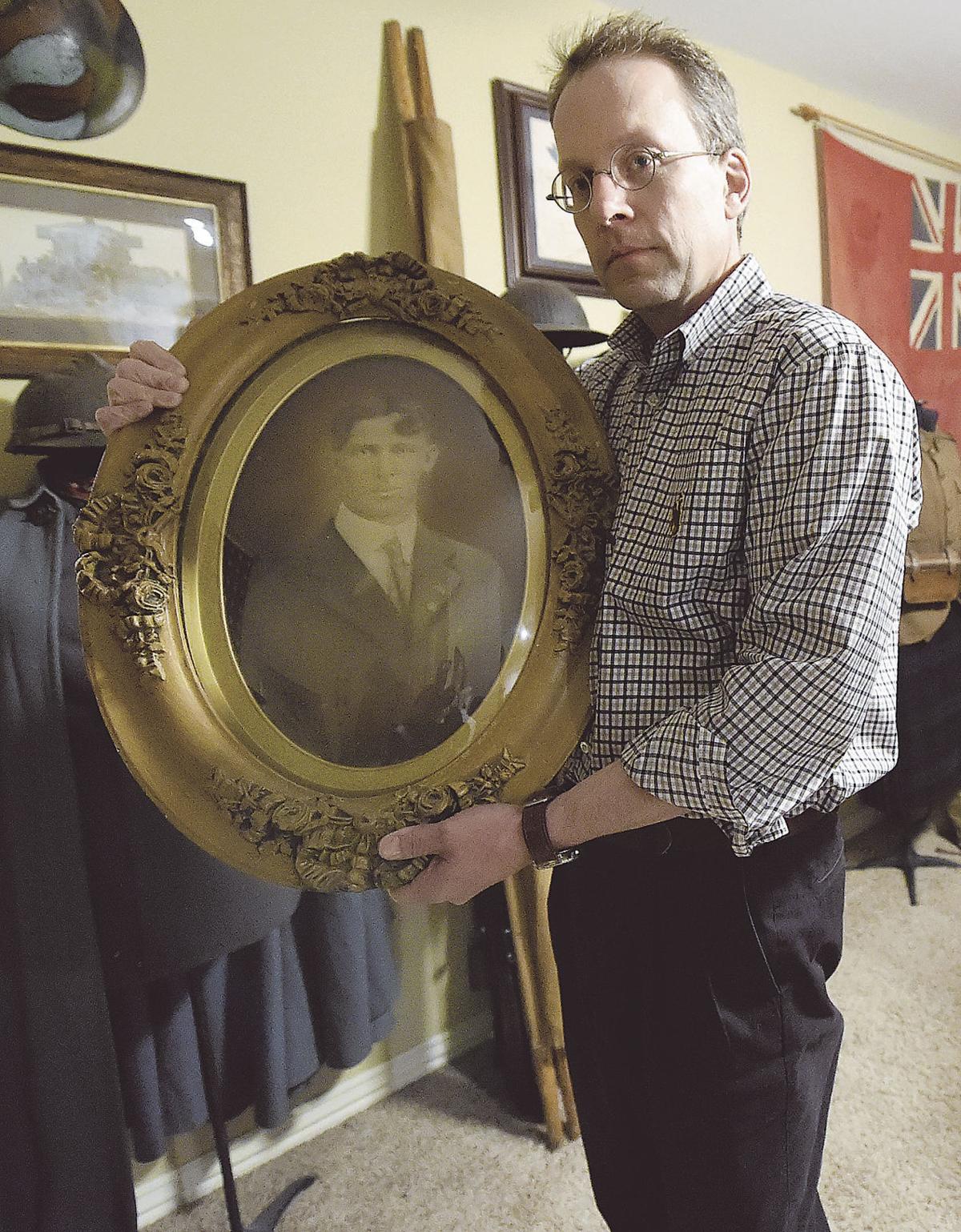 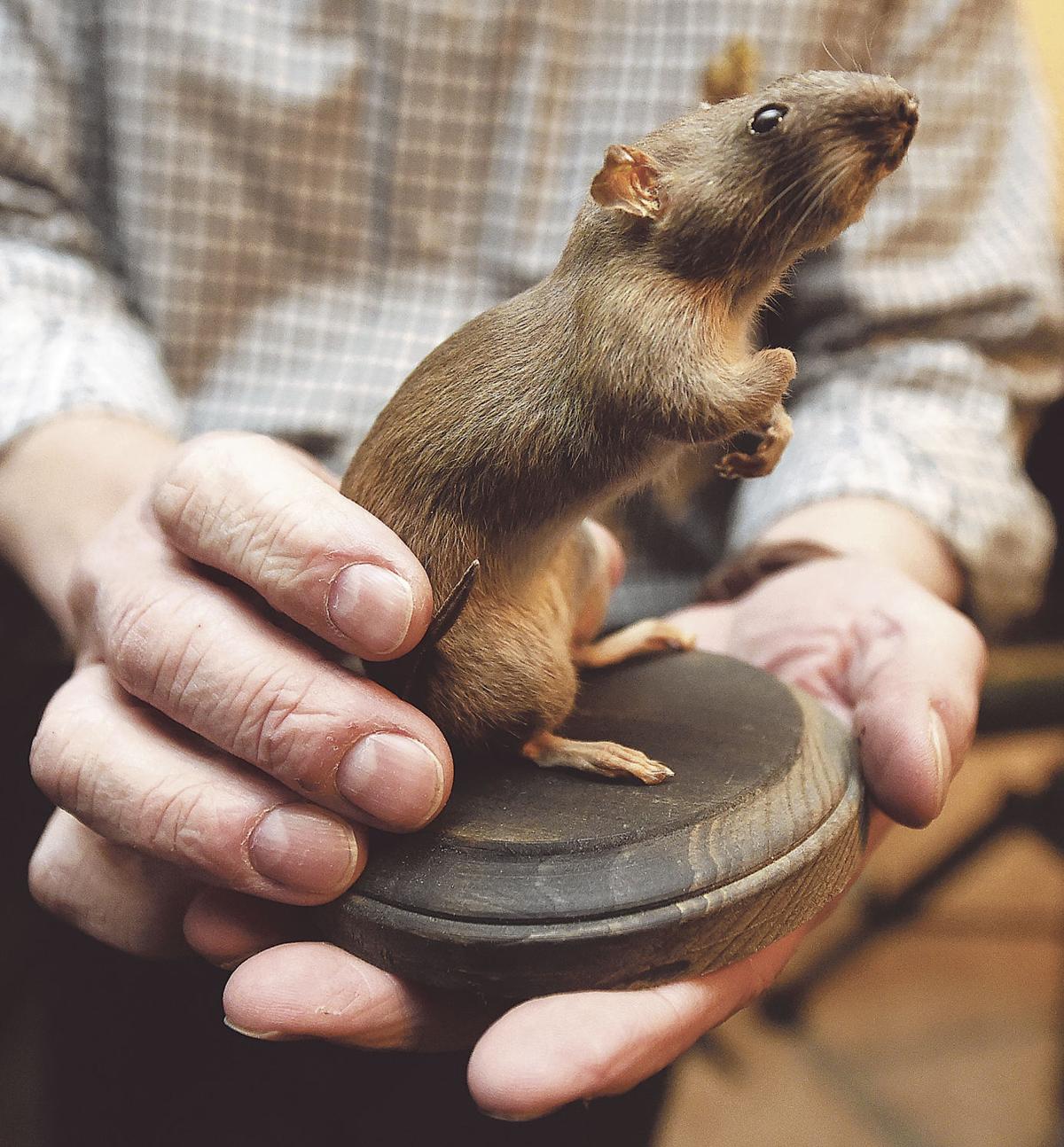 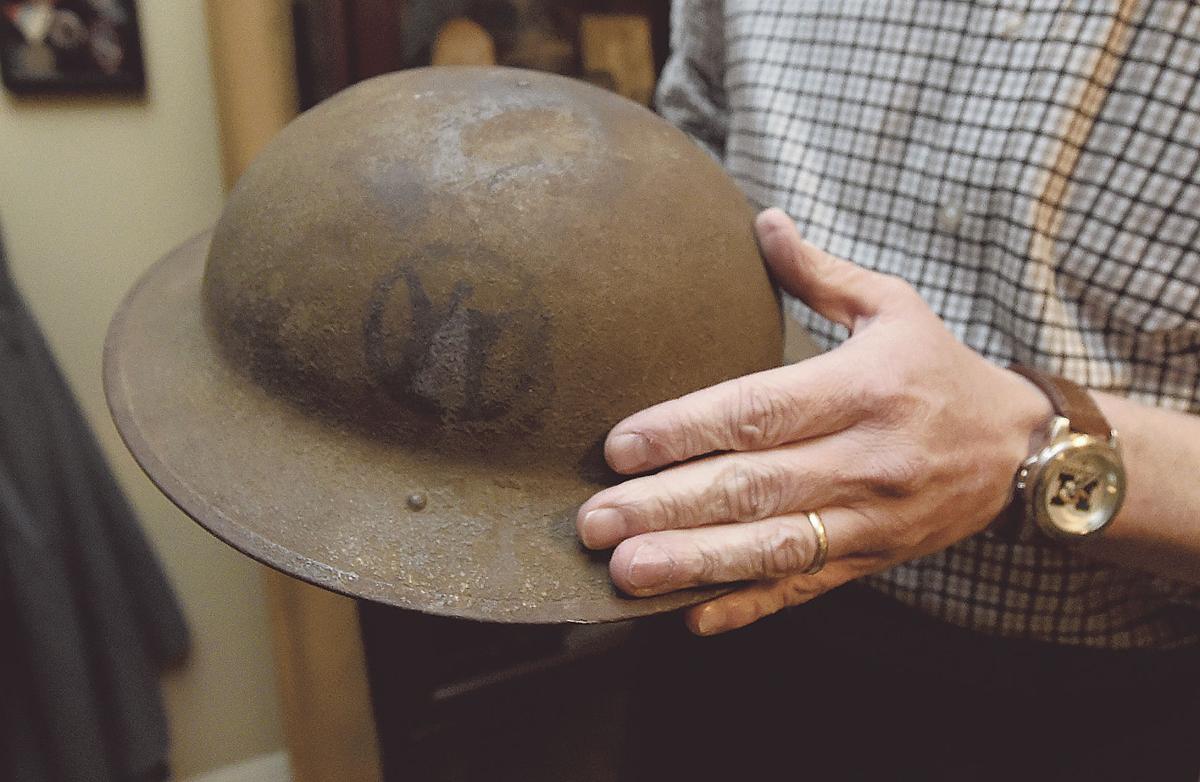 World War I collector Shannon Kelly holds a helmet with a dent from an enemy round. Globe | Laurie Sisk 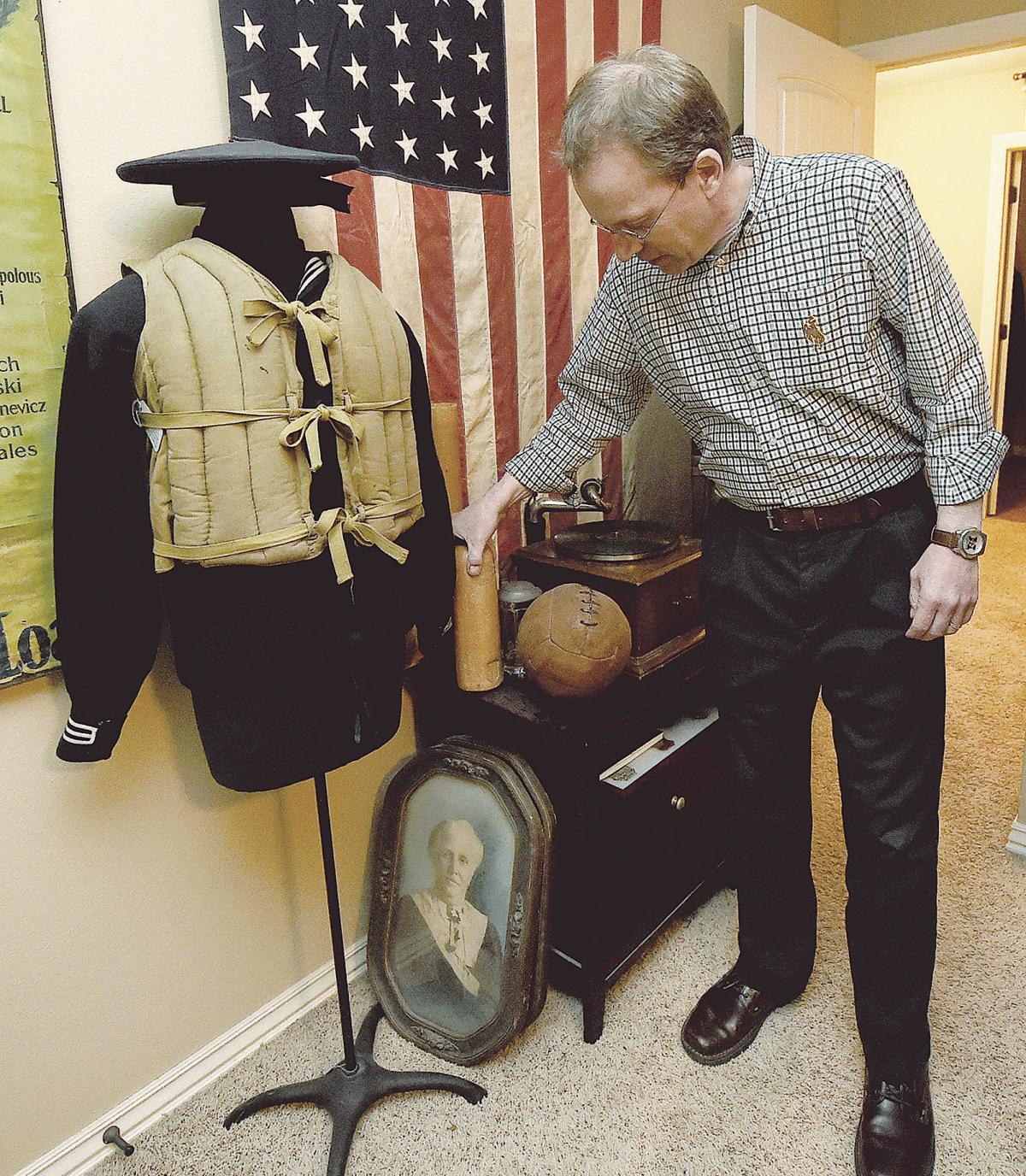 World War I collector Shannon Kelly stands near some of the WWI memorabilia he has collected since he was a 9-year-old boy, including a leather soccer ball used by troops. Globe | Laurie Sisk 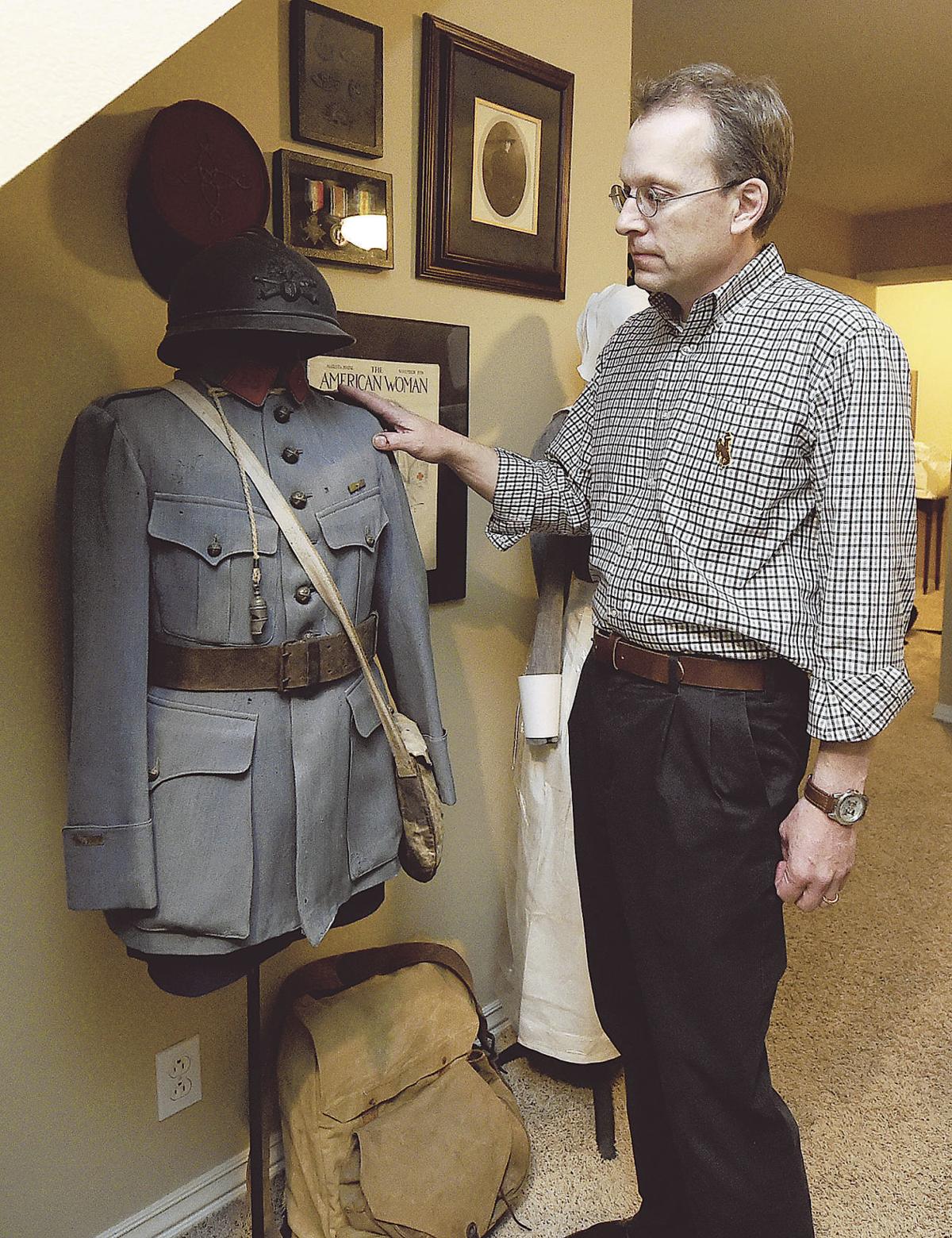 World War I collector Shannon Kelly shows off a French artillery officer's uniform  —  just one of countless items Kelly has collected. A fascination with a grandfather he never met has been guiding him since he was 9. He recently fulfilled a promise that during the 100th anniversary of the end of World War I, he would stand where his grandfather had in France. GLOBE | LAURIE SISK

Map showing the battle lines and identifiers for the American divisions involved in the Meuse-Argonne offensive from September 26 - November 11, 1918, during World War I.

World War I collector Shannon Kelly holds a helmet with a dent from an enemy round. Globe | Laurie Sisk

World War I collector Shannon Kelly stands near some of the WWI memorabilia he has collected since he was a 9-year-old boy, including a leather soccer ball used by troops. Globe | Laurie Sisk

World War I collector Shannon Kelly shows off a French artillery officer's uniform  —  just one of countless items Kelly has collected. A fascination with a grandfather he never met has been guiding him since he was 9. He recently fulfilled a promise that during the 100th anniversary of the end of World War I, he would stand where his grandfather had in France. GLOBE | LAURIE SISK

When the whistles sounded, James Gregg Kelly went “over the top,” and from his trench charged across a desolate wasteland scarred by craters, tangles of barbed wire, and dead and dying men.

One hundred years later, his grandson, 49-year-old Shannon Kelly, walked across that same land — now a plowed pasture — north of the French town of Limey. He also moved to the edge of the Bois de Mort-Mare, a forest that had once hidden a heavy concentration of trenches, bunkers and German soldiers.

Shannon was purposely walking in the ghostly footsteps his grandfather had made in northeastern France 100 years ago, during World War I.

As a soldier of Company E, of the 353rd Infantry Regiment of the 89th Infantry Division, James Kelly, of Seneca, Kansas, was 26 years old when he rushed headlong into the lethal spray of bullets and artillery shells.

What greatly surprised his grandson a century later was the preserved nature of the trenches. Equally preserved were concrete bunkers and pillboxes where the German 257th Infantry Regiment tried in vain to push back the attacking American doughboys on Sept. 12, 1918.

“You know how they talk during Halloween about how the ‘afterworld’ and our world are at their closest the night before All Saints’ Day?” Kelly said. “For some reason that’s what popped into my head at that moment — I felt as close to him as I’d ever felt, here, during one of the most monumental moments of his life.”

The terror his grandfather must have felt, Shannon said, “upon hearing that whistle and charging those guns — I can’t even imagine. And here I am, 100 years later, walking those same fields, stepping into those very same trenches that he was trying to take that morning. It was pretty moving.”

Today, Shannon, of Webb City, is one of Southwest Missouri’s most renowned World War I historians and collectors. His love for “the war to end all wars” came about primarily because of the love and fascination he has long held for his grandfather, a man who died in 1935. Immersing himself in the Great War’s history, he felt, would be the best way to connect with him.

At the age of 9, Shannon purchased a German helmet in a garage sale. It would be the first piece of an ever-growing collection that today includes a mortar shell and Russian Maxim machine gun. Six years later, in 1984, he made a pact with himself: On Nov. 11, 2018 — the 100th anniversary of the end of World War I — “I wanted to be as close as I could be to where Grandpa was at that moment,” Kelly said.

Over the years, he tried to plot out exactly where in France his grandfather had fought. Shannon knew James had participated in two major battles: Saint-Mihiel, Sept. 12-15, 1918; and the Meuse-Argonne Offensive, which began later that month. Shannon armed himself with a wide assortment of data to help nail down specific locations, including diaries, American and German postcards, regimental and company histories, as well U.S. Air Corps reconnaissance photos from 1918. He also used more modern tools, such as Google Earth. Despite all of that information, he was unable to pinpoint specific places; he just had broad swaths of land — a forest his grandfather’s unit passed through, for example, or a river that the 89th Division had crossed.

Twelve years ago, Shannon learned a cousin had unknowingly stashed away 18 letters written by James to his stateside girlfriend — Shannon’s future grandmother. The first one began when James was leaving for New York City from Fort Riley, Kansas, in May, 1918, and the last was nearly a year later, when James was a member of the American occupation force in Germany.

The letters helped fill in all the blanks, Shannon said. For example, they revealed that James had spent two days — Nov. 9 and 10, 1918 — at a small château. Another letter showed he’d been in the tiny village of Mouzay, France — near the river Meuse — when the war ended.

“Those 18 letters were the key,” Shannon said, adding that he couldn’t believe his luck. This was the moment, he continued, “where I was, somehow, being drawn into his story, (like he) was feeding me this tidbit, and that would lead me to another tidbit, as if they were clues I was finding that he had left behind so I could learn his story.”

Being able to see where his grandfather had charged the German trenches, and finding and exploring the preserved pillboxes, was a wonderful end to a long and emotionally exhausting day. Yet three other instances from earlier in the day stand out in his mind. They are stories, he said, that he wants to hand down to future Kelly generations.

When he entered Mouzay — decked in a 100-year-old wool World War I uniform worn by a member of his grandfather’s E Company — he passed a house flying French, Belgian and American flags. As he paused in front of the flags, the homeowner approached him. Speaking rapid-fire French, he seemed intrigued by Kelly’s World War I uniform.

“I told him, in French, that ‘my grandfather was here during the Great War.’”

The French citizen, in his 50s, broke into a happy grin and shook his hand before motioning him to stay where he was. Dashing back in his house, moments later he came back outside cradling a bottle of beer.

“He hands me this commemorative beer, from 1914, unopened, and says to me, in French, ‘Thank you, America.’”

The two men clapped each other on the back before going their separate ways.

That bottle of beer now sits prominently in Shannon’s collection.

Minutes later, standing at 11 a.m. on the steps of Mouzay’s single church on Nov. 11, Kelly held the picture of his grandfather close to him as the church bell high above his head began tolling, sending frightened pigeons in all directions. In fact, bells all across France were sounding at that moment, for 15 minutes. One hundred years ago, guns up and down the Western Front had fallen silent on the 11th hour of the 11th day of the 11th month.

“I wanted to be on those steps at that moment,” he said, knowing his grandfather had probably stood on the same steps, perhaps ducking his head inside the church a time or two. “I was literally stepping in my grandfather’s footsteps. I walked all over the village ... to make sure our footsteps crossed. This had been a 34-year trip (in the making). I wasn’t going to miss it.”

After pictures were snapped of Kelly in front of the church, including several with his two daughters, Julia and MacKenna, they jumped into a car and drove 20 minutes to the Meuse-Argonne American Cemetery. A ceremony honoring the fallen Americans buried there — 14,246 – was just wrapping up, he said.

“As I was walking up through the tombstones ... they were ending the ceremony with taps.”

“That’s when I heard my wife say to the girls, ‘Back up — give your daddy some room. He’s going to lose it.’

“Yeah, that was probably when it all came together,” Shannon said. “That’s when it really took my breath away and my knees buckled.”

The first, he said, was a sense of satisfaction, fulfilling the promise he’d made to himself all those years ago. There was, however, also a deep sadness “that I was never going to meet (James), that all of this had transpired before I’d ever had a chance to tell him how proud I was of him,” he said.

“There was also this anticlimactic feeling; when you wait for something since you’ve been 15 years old — and after 34 years of planning — I don’t have to look forward to this anymore because I’ve looked forward to it for so many years.”

Yet his journey hasn’t come to an end. He’s already planning another trip to France. This time, he wants to study the trenches he discovered during his visit there and, after gaining permission, perhaps excavate one of the cement pillboxes.

The positive coverage of last month’s centennial, along with Monday’s nationwide showing of Peter Jackson’s much-anticipated documentary, “They Shall Not Grow Old,” has pleased him immensely.

“I’m happy to see there has been more interest in the centennial than at any other time in my life,” Shannon said. “I (just) wish that more Americans were knowledgeable about (the war) and I wish as a nation we spent more time remembering the past.”

Shannon Kelly was thrilled to discover through his aunts that James Kelly, his grandfather, had gone around to various public school systems during the 1920s and early 1930s, dressing in uniform and teaching students about World War I, much as Shannon currently does with his frequent visits — in uniform — to the area school districts.

“To think I was unknowingly doing exactly the same thing he was doing, trying to tell his story almost 100 years later, to me that was the moment that clarified it for me, this really special connection between us.”

Kelly also helps World War I soldiers find proper burials from overseas. Earlier this year, he and fellow historian Kavan Stull helped Pvt. Elmer Chaboneau, a doughboy from Carterville who died in France during the last year of the war, receive a proper burial in the town’s cemetery alongside his mother. There has been a handful of WWI soldiers exhumed from France upon the request of their families and relocated here over the years.

When the whistles sounded, James Gregg Kelly went “over the top,” and from his trench charged across a desolate wasteland scarred by craters, …

In the dark of Christmas Eve 1914, as British soldiers crouched in muddy, cold, rat-infested trenches along parts of the Western and Eastern fronts in Belgium, they saw twinkling lights in the distance.