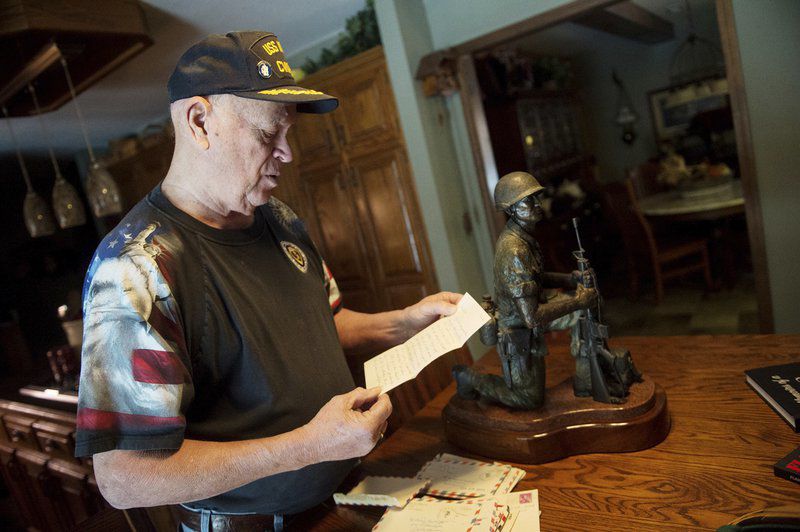 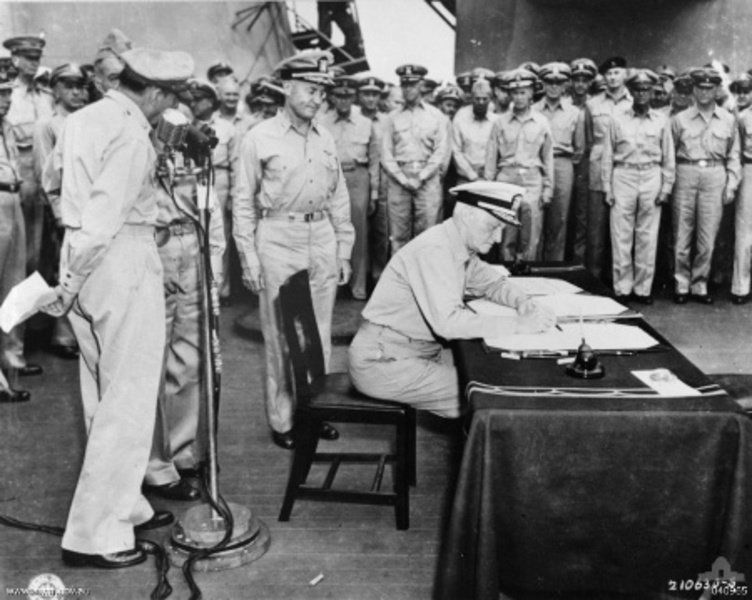 Chester Nimitz, representing the United States, accepts the instrument of surrender from Japan aboard the USS Missouri in Tokyo Bay in September 1945. 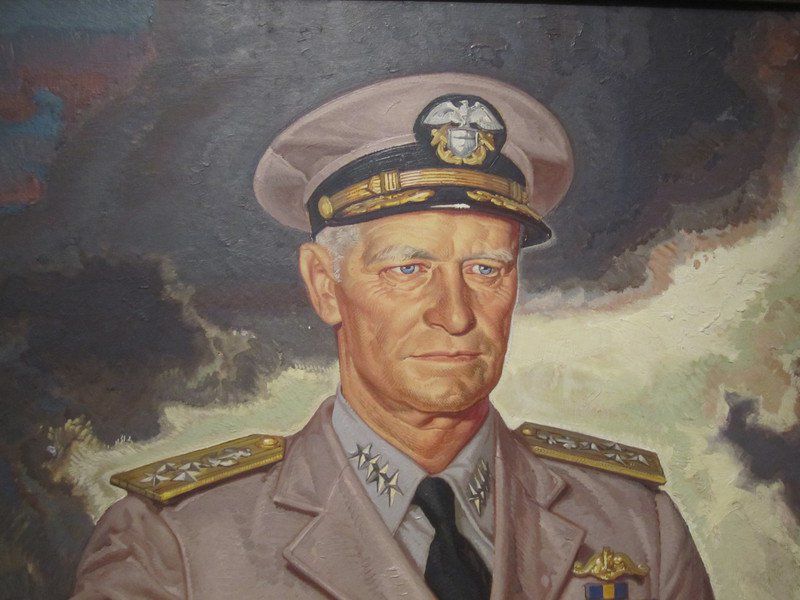 This is the painting of Adm. Chester Nimitz in the National Portrait Gallery in Washington, D.C. 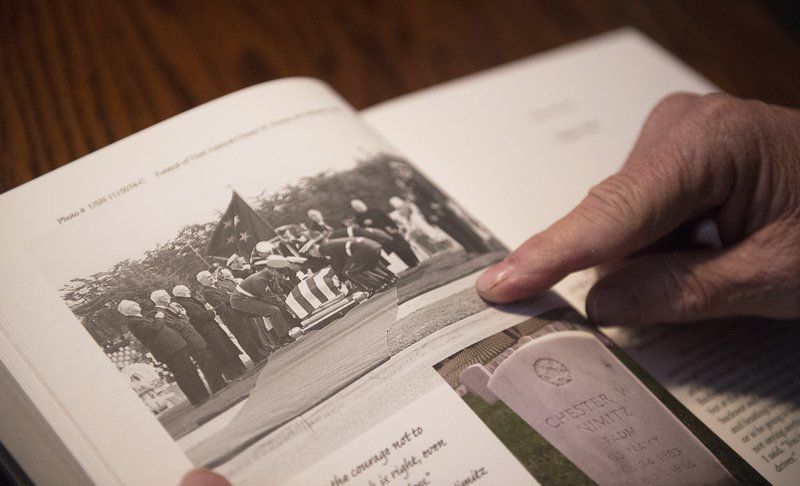 Ron Mosbaugh shows a photo of the funeral of Adm. Chester Nimitz. Mosbaugh, who had been asked to be a pallbearer, was unable to attend. Globe | Roger Nomer 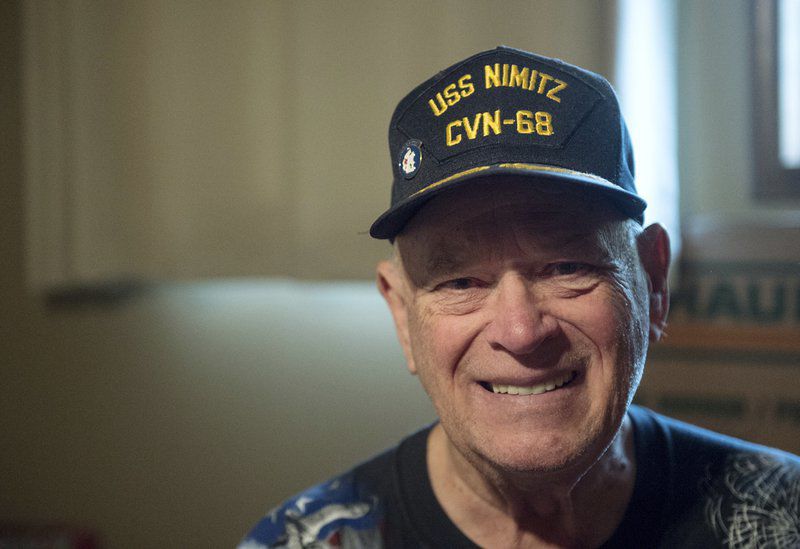 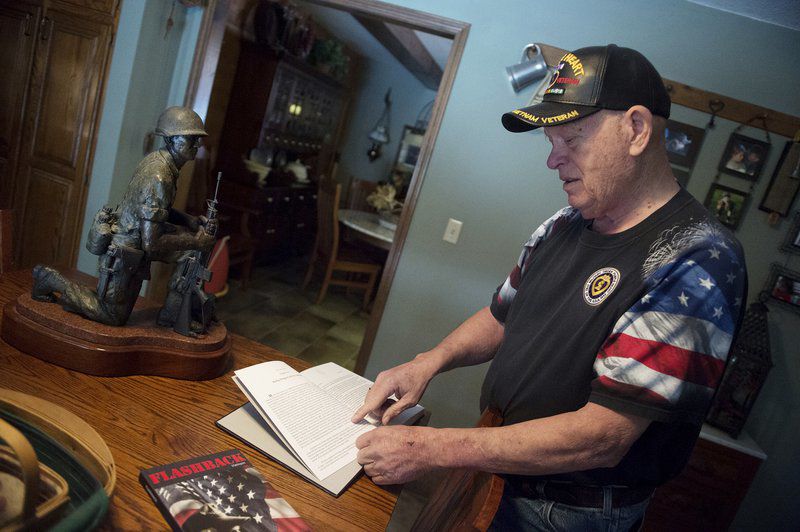 Ron Mosbaugh included in his book letters from his time with Adm. Chester Nimitz.Globe | Roger Nomer

Chester Nimitz, representing the United States, accepts the instrument of surrender from Japan aboard the USS Missouri in Tokyo Bay in September 1945.

Ron Mosbaugh shows a photo of the funeral of Adm. Chester Nimitz. Mosbaugh, who had been asked to be a pallbearer, was unable to attend. Globe | Roger Nomer

Ron Mosbaugh included in his book letters from his time with Adm. Chester Nimitz.Globe | Roger Nomer

The recent release of the movie "Midway" shines a Hollywood spotlight once again on Chester Nimitz, who led the U.S. Pacific Fleet from soon after the attack on Pearl Harbor to the surrender of Japan in Tokyo Bay in September 1945. Nimitz is one of only four five-star fleet admirals in the history of the U.S. Navy.

A Joplin man had an opportunity to get to know Nimitz in the final years of the admiral's life.

U.S. Navy veteran Ron Mosbaugh spent the first eight months of his military career as personal corpsman to Nimitz in 1965-1966.

Nimitz, played by Woody Harrelson in the movie that was released Friday, took command of the Pacific Fleet just after the Japanese attack on Dec. 7, 1941, and saw the Navy through a series of pivotal sea battles, including Midway, which stopped the Japanese advance and turned the tide of the war in the Pacific. The battle of Midway was a decisive naval action from June 4-7, 1942, that was centered on the Midway Atoll at the extreme western end of the Hawaiian Island chain about 1,300 miles west of Pearl Harbor.

Mosbaugh joined the U.S. Navy in 1965 with his twin brother, Don Mosbaugh.

The two went through 16 weeks of corpsman school together before they were sent to Oakland Naval Hospital in California. Corpsmen are the emergency medical technicians of the Navy.

Ron Mosbaugh said he had no idea who Nimitz was when an assignment officer asked him if he wanted to be the admiral's personal corpsman.

“I went to the detailer, and Admiral Nimitz had just been admitted to the hospital,” Mosbaugh said. “He had had a stroke and he was also dealing with COPD. They said, 'Would you like to be the corpsman for Admiral Nimitz? And I said, ‘Who?’”

Mosbaugh said he spent the next eight months caring for the admiral, getting to know him.

“I didn’t realize at the time what a privilege the assignment was,” Mosbaugh said. “Even though he was 82 years old, he was still very coherent and ambulatory. He was a great guy, very congenial, really friendly. He never looked down on me at all. It was quite an honor.”

Mosbaugh recalled the two of them watching "In Harm's Way," a 1965 movie with a character based on Nimitz played by actor Henry Fonda. (Fonda played Nimitz again in the 1976 movie titled "Midway.")

“When I was sitting there watching that movie, I learned some stuff. I thought it was really amazing, here I am sitting with the guy who Henry Fonda was portraying. That really impressed me, I could relate to Henry Fonda, but I couldn’t relate to the admiral. He was in deep thought a lot during the movie. I remember looking at him and thinking to myself, 'I wonder what he’s thinking right now.' At times he’d say, 'No, no, no, it wasn’t that way.' He did say that a few times. He’d say, 'It wasn’t that way, it was this way.'"

U.S. radio intelligence officers had broken the Japanese naval code and figured out that Midway was the next Japanese target, and they also were pretty sure they knew the composition of the fleet that would attack the island.

Military commanders in Washington were skeptical of the radio intelligence and feared the Japanese were planning a second raid on Pearl Harbor or even the West Coast of America, but Nimitz trusted the intelligence. He sent reinforcements and additional planes to Midway Island, and he deployed his carriers to the northeast of Midway where they could ambush the Japanese fleet.

Midway sent out radio messages with the location of the Japanese carriers, and the American carriers joined the fray.

American torpedo bombers attacked alone, without the support of dive bombers and fighters, resulting in tragic losses, including the loss of all 15 planes and all but one of 30 pilots and air crew from one squadron.

Those torpedo attacks caused the Japanese fighters protecting their carriers to come to low altitude, leaving no one to defend against American dive bombers, which struck and set three of the four Japanese carriers on fire.

A fourth Japanese carrier launched two airstrikes on the U.S. carrier Yorktown, hitting her with three bombs and two torpedoes and knocking out her engines.

She was abandoned, but aircraft from Yorktown and Enterprise were sent out and hit the fourth Japanese carrier, sending her to the bottom.

A salvage crew tried to save the Yorktown when she continued floating after she had been abandoned, but a Japanese submarine intercepted the fleet, sinking Yorktown and the destroyer Hammann, which was tied alongside the carrier, providing electric power to the salvage crews.

The Japanese fleet retreated and remained on the defensive for the rest of the war.

Mosbaugh, who served as Jasper County coroner and county clerk for several years, has written a book about his experience as a combat corpsman in Vietnam and subsequent battle with post-traumatic stress disorder. The book, called “Marine Down, Corpsman Up: Vietnam and PTSD,” includes a chapter about his days as Nimitz’s personal corpsman and is available on Amazon.com.

Mosbaugh said he and his brother came home for leave around their birthdays. They had just completed the long drive home when he got a call from California saying Nimitz had died. It was Feb. 20, 1966.

“They wanted to know if I wanted to be a pallbearer,” Mosbaugh said. “I said, 'No. It took me 30 hours to drive home, I don’t want to turn around and go back.' Ever since that time, I’ve regretted that. That would have been really neat and a huge honor. But I was a kid and I didn’t want to go all the way back.”