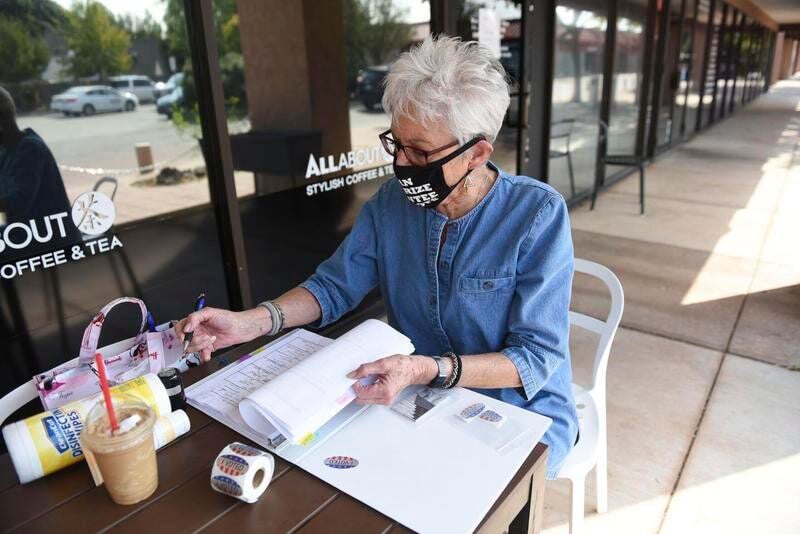 Claudia Swisher sits at a table at All About Cha in Norman, Oklahoma, on a recent weekend. Swisher uses a table outside the coffee shop as makeshift office to notarize mail-in ballots for voters. The Norman Transcript | Kyle Phillips 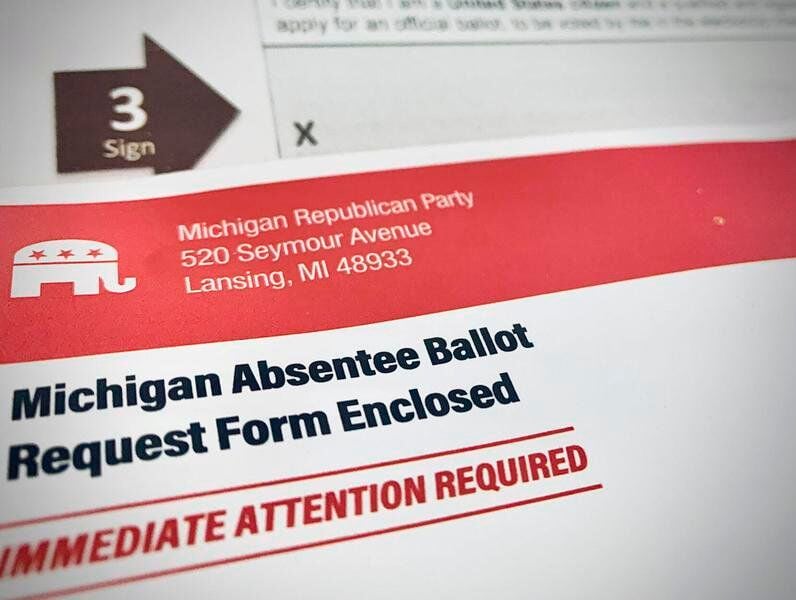 Claudia Swisher loves casting her ballot in person on Election Day, but this year, COVID-19 health concerns are keeping her away from the polls.

In her lifetime, the 75-year-old Norman, Oklahoma, resident has voted only four times by mail. She cast three of those ballots this year. Swisher also paid $100 to become a notary public to make it easier for her neighbors to comply with the absentee ballot notarization law in the state.

“I want to take away as many barriers as possible to vote because people who want to vote should have as many options as possible,” Swisher said.

All but a handful of states now allow widespread access to mail-in — or absentee — balloting, but voters nationwide find themselves navigating a complex patchwork of regulations, covering things such as voter ID requirements and strict ballot deadlines, that vary from state to state.

And prospective voters face conflicting messages about whether their ballots will be counted amid concerns over U.S. Postal Service delivery delays, barriers to access in poorer communities and the potential for fraud, despite no significant evidence that is, has been or will be a problem.

Still, experts say mail-in ballots will play a pivotal role in the Nov. 3 election and warn the race may not be settled until days later or longer, as record-setting numbers of people vote by mail.

The last presidential election was decided by margins of less than 2% in six states — Florida, Pennsylvania, Michigan, Minnesota, New Hampshire and Wisconsin. Pundits and policymakers differ on which states will swing this year, but some estimate the race could hinge on voters in eight, including Arizona, Florida, Georgia, Michigan, Minnesota, North Carolina, Pennsylvania and Wisconsin.

A CNHI data analysis showed voters cast ballots by mail in record numbers in the 2020 primaries when compared with 2016. Spikes in vote-by-mail turnout ranged from 2,758% in Georgia to 11% in Florida. Pennsylvania, which allowed anyone to vote absentee for the first time in 2020, saw a 1,616% increase in returned absentee ballot applications.

The increases in mail-in and absentee voting also held in places where total turnout fell.

• In seven of eight states examined, median household income of a county had a positive relationship with the use of mail-in and absentee ballots. Generally, the more wealthy a county, regardless which political party claims majority support, the more voters used mail-in or absentee ballots in 2020.

The net effect of the exponential growth of remote voting has been a substantial expansion and diversification of the pool of people who participate in elections, said Enrijeta Shino, a University of North Florida assistant professor of political science.

Prior to 2020, Republicans tended to vote by mail at higher rates than Democrats, but that is changing, she said.

The data from states examined for this report shows neither major political party benefited more from mailed ballots in 2020. In Oklahoma and Pennsylvania, Democrats were more likely to vote by mail. In Florida and Georgia, Republicans cast more ballots by mail.

More consistent than party-line divides in voting behavior are economic divides. In seven of eight states, mail-in and absentee voting was more popular in counties with higher median incomes.

A poll of New York voters conducted by Siena College in late September found voters in the youngest age bracket — 18 to 34 — and those with an annual income of at least $50,000 are more likely to vote by mail in the November election.

President Donald Trump has been a frequent critic of mailed ballots, attempting to discredit their use. He’s cited risks of “mayhem” and fraud.

Despite repeated claims by politicians, the Brennan Center for Justice, a nonpartisan public policy and law institute, found fraud is “very rare, voter impersonation is virtually nonexistent, and many instances of alleged fraud are, in fact, mistakes by voters or administrators.”

The institute found the same holds true for mail-in ballots, which are “essential to holding a safe election” during the pandemic.

In some states, GOP and Trump campaign leaders are even urging mailed ballots.

“As absentee has grown exponentially, we give every voter that we talk to the opportunity to cast absentee,” said Brian Barrett, regional political director in Georgia for the Trump Victory campaign.

Still, many conservative voters are quick to question security of mailed ballots.

“Now you’ve got all these states with different regulations and dates and postmark dates,” Rugen said. “I don’t like that.”

“It really does make it much more difficult to manipulate or steal an election,” he said.

But the patchwork of procedures has created disparities. States that don’t provide free return postage for ballots risk disenfranchising minority and low-income communities, and a lack of reliable broadband access across swaths of rural America can make it difficult to even request ballots, experts said.

Additionally, voters in some places already have experienced problems with mailed ballots.

Still, there is no evidence that absentee balloting creates a widespread problem, said Grant Reeher, director of the Campbell Public Affairs Institute at Syracuse University.

Some Americans fear upheaval at the U.S. Postal Service could thwart their chance to vote after a top-down restructuring in the organization that reduced mail sorting capacity in some places.

In response to concerns both about mail delivery and processing, many states have made changes to ballot processing restrictions.

In Michigan, clerks now will count late-arriving ballots that are postmarked by Nov. 2.

Traverse City, Michigan, Clerk Benjamin Marentette said he doesn’t believe the concerns about late ballots merit as much attention as they get.

For those who don't trust the mail, Marentette encourages voters to drop their absentee ballots off in person.

CNHI statehouse reporters and a data journalist collected, organized and analyzed elections data from a number of key states across the U.S. to answer two broad questions: How have absentee and mail-in voting changed since 2016? And where are voters using the method more during the 2020 primaries?

The team gathered county-level voting and demographic data from state elections officials and the U.S. Census Bureau in eight states: Florida, Georgia, Indiana, Michigan, Minnesota, Ohio, Oklahoma and Pennsylvania. The first and most basic analysis examined differences in total mail-in and absentee votes to compare the two presidential election years. The results showed at least an additional 5.2 million mail-in and absentee votes were cast in 2020 primary elections when compared to similar 2016 elections.

Data depicting which parties used mail-in or absentee balloting was only available for four states. In two of them — Florida and Georgia — Republicans used mail-in voting more often than Democrats during 2020 primary elections. In Oklahoma and Pennsylvania the trend was reversed, and Democrats were more reliant on absentee and mail-in voting. The analysis used basic linear regressions to look for correlations between a county's partisan lean and voter behavior in the remaining states. In three of the four, counties with more Democratic voters tended to use absentee and mail-in balloting at greater rates.

Similar regressions examined correlations between demographic variables and voting behavior. The most consistent pattern, observed in seven of the eight states analyzed, is a relationship between higher median household incomes and increased use of mail-in or absentee ballots. In some states the relationship was weak, and in some it was strong, but in six of those seven, the positive correlation between voting behavior and income was statistically significant at the 95% level.

Mail-in ballots not in demand in most area counties

Mail-in voting is not being used much so far by voters in most Southwest Missouri counties.