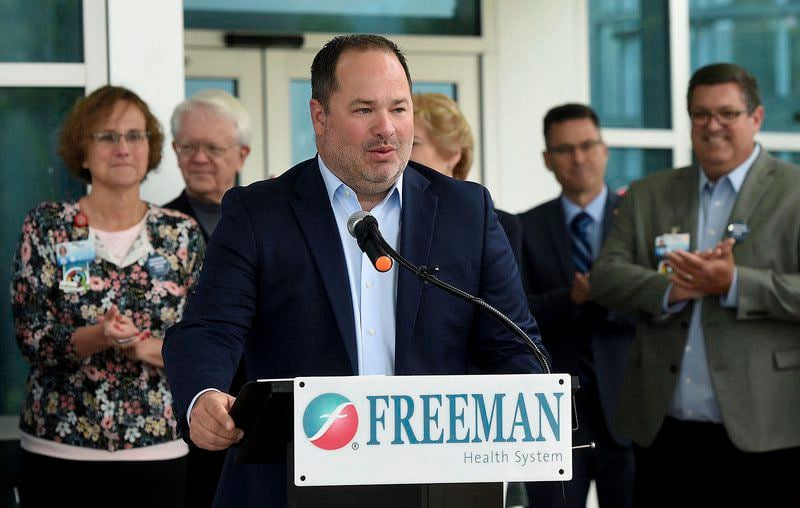 Representatives from Healthcare for Missouri and Freeman Hospital West gather in support of an initiative petition that will be on the August election ballot in Missouri.GLOBE | LAURIE SISK 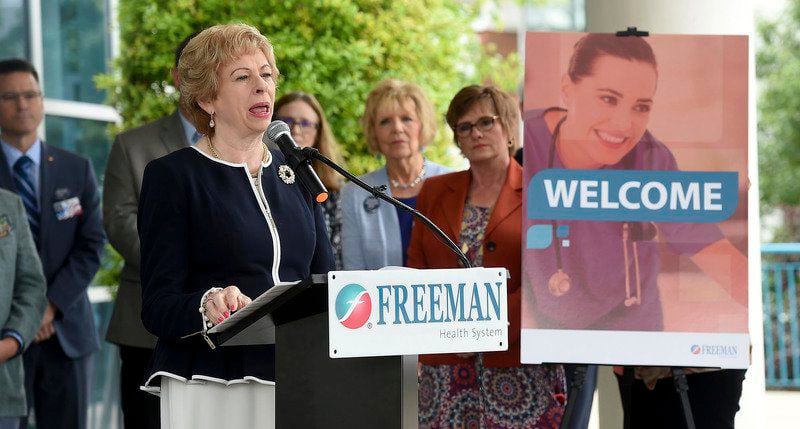 Paula Baker, Freeman Health System president and CEO, voices her support for Medicaid expansion during a Healthcare for Missouri campaign stop on Wednesday at Freeman Hospital West. She says that because of the absence of Medicaid expansion in Missouri, hospitals such as Freeman continue to be at a disadvantage. GLOBE | LAURIE SISK

Representatives from Healthcare for Missouri and Freeman Hospital West gather in support of an initiative petition that will be on the August election ballot in Missouri.GLOBE | LAURIE SISK

Paula Baker, Freeman Health System president and CEO, voices her support for Medicaid expansion during a Healthcare for Missouri campaign stop on Wednesday at Freeman Hospital West. She says that because of the absence of Medicaid expansion in Missouri, hospitals such as Freeman continue to be at a disadvantage. GLOBE | LAURIE SISK

Healthcare for Missouri, the coalition leading the charge to pass Medicaid expansion in the state, applauded Gov. Mike Parson’s recent decision to move the ballot question from November to August because the group believes it will aid Missourians more quickly.

“Over the last couple of months, we’ve seen a lot of heroics by essential workers, who were on the front lines and having to come to work every day while most of us were having to stay home,” said Jack Cardetti, Healthcare for Missouri spokesman.  “And consequently, some of those workers are the exact same workers that are caught in this Medicaid gap because they make too much money to qualify for Medicaid, but their employer doesn’t offer insurance and they make too little money to afford it on the private market."

The coalition consists of health care professionals, patients and business leaders who want to make Missouri the 37th state to expand Medicaid. Even though the August date gives the group less time to campaign, Cardetti said the group is optimistic the measure will pass because it gained nearly 350,000 signatures from registered voters in order to place the initiative on the ballot. Amendment 2 would deliver health care to an estimated 230,000 additional Missourians.

The Healthcare for Missouri campaign stopped at Freeman Hospital West in Joplin on Wednesday with its Medicaid Ambulance Response Vehicle as part of its multiple-day swing through Southwest Missouri.

Paula Baker, Freeman president and CEO, said that Freeman Health System supports Healthcare for Missouri and has been lobbying for expansion for several years.

“Most importantly, Medicaid expansion will improve the health of those caught in the gap of making too much money to qualify for marketplace subsidies but not making enough to buy insurance, older people who have lost their health insurance but are not yet old enough for Medicare, and many other individuals who can’t afford to see a doctor,” she said on Wednesday.

Baker noted that many people without health insurance end up visiting an emergency room for care, the most expensive venue for treatment. If patients can’t foot the bill, hospitals write it off as charity care or bad debt, she added.

“On top of that, federal reimbursements for uncompensated care have decreased drastically over the past several years — Freeman Health System has lost literally millions of dollars, and other Southwest Missouri hospitals are in the same boat,” Baker said. “If Medicaid is not expanded, we expect decreases in reimbursement to accelerate.”

On Tuesday, Parson said he put the measure on the Aug. 4 primary ballot instead because the state needs as much time as possible to financially prepare if the measure is approved.

“Pass or fail, it is important that we understand the implications of what would be a new spending bill out of our already depleted general revenue,” Parson said.

According to research from Pew Charitable Trusts, Missouri is a top five state for general revenue spending on Medicaid. The state estimates it will need an additional $88 million in general revenue through fiscal year 2021 because of COVID-19.

“I want to be clear that this is about policy, not politics,” Parson said. “At a time when our state is undergoing a major health, economic and budget crisis, we need to know exactly where we stand on what would be a massive spending initiative for Missouri.”

Democratic gubernatorial challenger Nicole Galloway's campaign manager, Chris Sloan, in a statement said Parson was putting the measure on the August ballot because “he hopes that a smaller electorate will give him a better chance of misleading the voters and defeating it.”

“Now more than ever, Missouri needs health care, but Gov. Parson put his own political needs ahead of hundreds of thousands of working Missourians," Galloway said in a statement.

Constitutional Amendment 2 would expand eligibility under the terms of the 2010 federal health care law signed by President Barack Obama. That law provides a higher-than-usual federal funding share for states that expand Medicaid coverage to adults earning up to 138% of the federal poverty level, about $17,600 for an individual or $30,000 for a family of three.

However, the coronavirus has led to a massive drop in the state's revenue collections. Rep. Cody Smith, a Republican from Carthage who chairs the House Budget Committee, said Parson made the right move because they’ll need as much time as possible to prepare the state budget for the costs that would be incurred if amendment passes.

He said that it’s counterintuitive to expand a government program while also saving money in the process. He added that the estimated number of additional potential enrollees in the expansion may not be accurate and will most likely double, based on the outcome from other states that have passed the measure.

“If we have about a $2 billion expansion, which is $200 million in general revenue and about $1.8 billion in federal funding, that’s figuring about 250,000 Missourians that would be added to the Medicaid rolls that would now qualify under the expansion population,” Smith said.