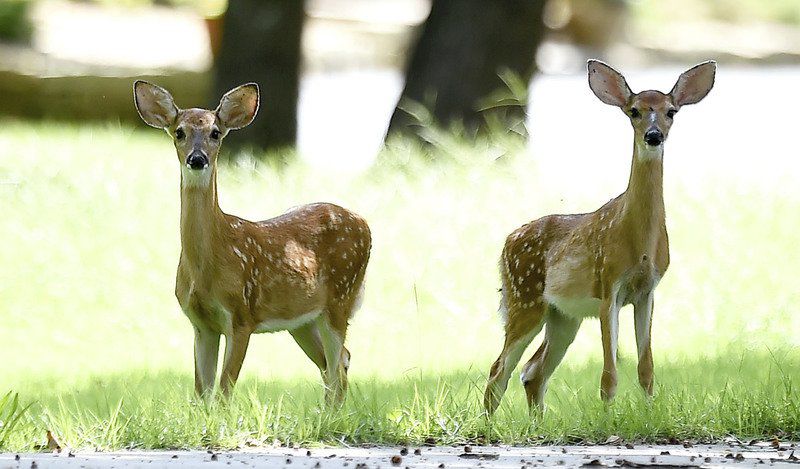 With their spots still visible, two fawns look up from grazing on a lawn along McClelland Boulevard south of West 32nd Street in Joplin.Globe | Laurie Sisk 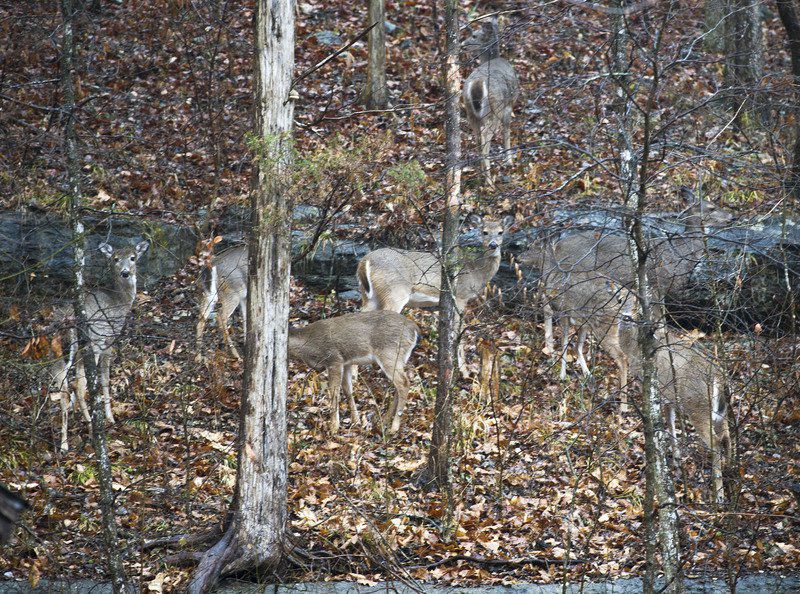 Eight deer from a larger herd pepper a hillside near Campground One at Roaring River State Park, near Cassville.Globe | Laurie Sisk

With their spots still visible, two fawns look up from grazing on a lawn along McClelland Boulevard south of West 32nd Street in Joplin.Globe | Laurie Sisk

Eight deer from a larger herd pepper a hillside near Campground One at Roaring River State Park, near Cassville.Globe | Laurie Sisk

It was a November not unlike this one. Some warm days, some chilly.

Deer were on the move in the Ozarks.

• Nov. 15: “We traveled diligently and silently. ... The deer frequently bounded on before us,” the explorer wrote.

• Nov. 20: “In our progress, we have been continually breaking in upon the retreats of those natural possessors of the soil, the bear and the deer.”

• Nov. 28: “We have seen abundance of deer, for whom it appears to be a favorite range of this season of the year.”

Deer were so common, in fact, that when Henry Rowe Schoolcraft and Levi Pettibone made camp one night not far from Missouri’s Current River, stretched out before the fire, they noted wolves “set up their howling, apparently within 200 yards of us ... and as we knew their common prey, the deer, was abundant in that quarter, we had little apprehension for our safety.”

And so it went, for the better part of three months in the winter of 1818-1819, as the two men wandered through the Ozarks, leaving behind a detailed description of the area, a picture of part of Missouri before settlement, before statehood, and a description of a region rich with deer.

Just how many deer were in Missouri two centuries ago, as Europeans began arriving, no one knows.

Dunbar Robb, who worked as a chief biologist for the Missouri Department of Conservation beginning in 1941 and who was involved in the state’s effort to rebuild its deer population, says early estimates ranged from 10 deer per square mile to 20 deer per square mile in Missouri, or from about 700,000 to 1.4 million.

What’s not in question is that within the span of one life, that “abundance of deer” that Schoolcraft noted again and again was nearly wiped out.

According to Robb’s report, by 1890 — and nearly within Pettibone’s long lifetime — deer were gone from most of western and northern Missouri.

Kevyn Wiskirchen, deer biologist for MDC, said the best estimate is that Missouri had 400 deer left in a handful of Ozark counties in 1925.

It was a dramatic collapse, blamed on a number of things.

Habitat loss, for one. In the Ozarks, millions of acres of timber were cut — all within a decade or two — eliminating shelter and food, fragmenting and isolating surviving deer populations, contributing to their decline.

“It was a source of income and food for some, and there was no regulation on that at all,” Wiskirchen said of deer.

Francis Skalicky, also with MDC, recently noted this 1881 report from the Doniphan Prospect-News, not far from where Schoolcraft and his companion camped with those wolves near the Current River.

On his journey through the Ozarks two centuries ago, Schoolcraft also hinted at the coming problem.

“The Indian considers the forest his own, and is careful in using and preserving every thing which it affords,” he observed during his journey, not far from what is today Branson. “He never kills more meat than he has occasion for. The white hunter destroys all before him and cannot resist the opportunity of killing game, although he neither wants the meat nor can carry the skins.”

Indiscriminate slaughter, he noted, was a cause of “enmity” between Native Americans and the first Europeans to penetrate the Ozarks.

This November — two centuries after Schoolcraft, nearly a century after the deer population fell to its historic low — is a milestone of sorts in Missouri.

It is the 75th anniversary of what MDC calls the “dawn of the modern deer season,” which began in 1944, when the state estimated its deer population at 15,000; it also is the 60th anniversary of deer hunting being allowed statewide, in 1959.

Wiskirchen puts Missouri’s deer population today at about 1.4 million — about 20 per square mile. It peaked in 2004 at 1.55 million, he said.

“Today, it almost certainly exceeds what presettlement would have been,” he said, adding that the number of deer would have varied across the state.

“Our story is similar to a lot of the Midwest,” he said — a story of “heavy, heavy decline, almost no deer left” — followed by a growing awareness of the loss, a commitment to conservation efforts, including restocking, public wildlife refuges and hunting regulations, followed by a slow but steady rebound.

Missouri boosted its surviving population with whitetail brought in from other states, largely Michigan, and by trapping and relocating some of those Ozark survivors.

Restocking in Southwest Missouri began in 1940 in Barry County and then moved into McDonald, Newton and Lawrence counties in the following years.

Skalicky says the animal itself also played a key role.

“Part of the credit for the deer’s comeback does go to the deer. They are very adaptable,” he said, noting they not only survive but thrive today in the forests of southern Missouri and the prairies and fields of western and northern Missouri, as well as in the state’s largest cities.

And part of the credit goes to residents of the state.

“The citizens of Missouri played a huge role in this too,” he said, explaining that releasing deer in the state to rebuild the population and using tax money for wildlife refuges required the support of both landowners and hunters.

Even though Missouri’s population of deer has recovered, the work of managing it hasn’t gone away.

Wiskirchen said biologists are still trying to understand better the carrying capacity of Missouri’s forests, farms and prairies. It depends on how the land is managed, he explained, and noted that two adjoining properties can have dramatically different carrying capacities.

Also on the minds of a lot of deer biologists as well as hunters in Missouri this weekend is the spread of chronic wasting disease, first found in Missouri’s captive deer nearly a decade ago. An outbreak in Arkansas that was identified in 2016 is also spreading north and last year crept into Taney and Stone counties in southern Missouri. Although only one case each was reported in those two counties, it was the first time the disease was picked up in Southwest Missouri.

Building the next generation of hunters also remains a challenge, these experts say. Nationwide, hunting is down. The U.S. Fish and Wildlife Service recently concluded that the percentage of people who hunt today is half of what it was 50 years ago.

Although Missouri has fared better than other states, Skalicky said, hunter recruitment remains part of the puzzle when it comes to managing deer. He hopes the tradition of deer hunting, with deep roots in Missouri, lures along that next generation of hunters.

“Hunting is still very much a part of Missouri culture. It’s a time when families get together, when friends get together, maybe who haven’t been together since last November,” he said.

“It’s a part of what Missourians do for recreation around here.”

Because their natural predators — cougars and wolves — are gone, the state depends on hunters to help stabilize today’s deer population. According to the Missouri Department of Conservation, hunters typically harvest about 17% to 20% of the deer population each year or between 200,000 and 300,000 deer annually, with the bulk of that occurring during the 11-day modern firearms season, which opens today.