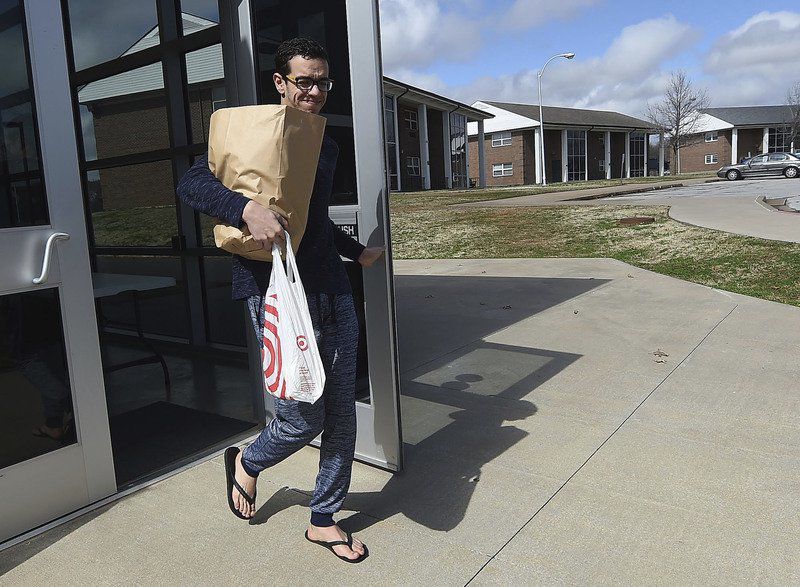 Missouri Southern junior Oussama Aamari, of Morocco, leaves emergency shelter at MSSU after picking up a week's supply of groceries Wednesday from the Lion Co-op. The co-op plans to be open to serve MSSU students still on campus from 3 to 5 p.m. each Wednesday while the school is closed. GLOBE | LAURIE SISK 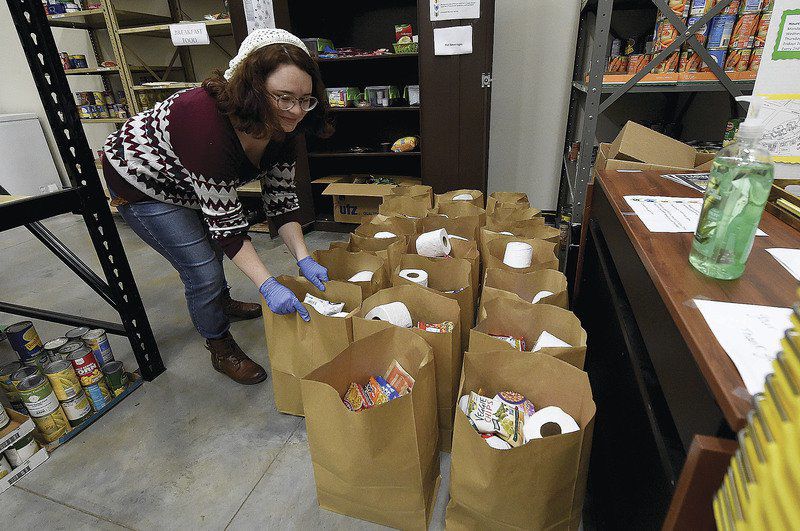 Missouri Southern junior Oussama Aamari, of Morocco, leaves emergency shelter at MSSU after picking up a week's supply of groceries Wednesday from the Lion Co-op. The co-op plans to be open to serve MSSU students still on campus from 3 to 5 p.m. each Wednesday while the school is closed. GLOBE | LAURIE SISK

The Missouri Southern State University campus may be shut down due to COVID-19, but organizers with the Lion Co-op are making sure no students or staff go without basic necessities during the outbreak.

Lion Co-op, located in the Federal Emergency Management Agency storm shelter near the residence halls, will be open to students, faculty and staff from 3 to 5 p.m. every Wednesday through April 29. Although the Mayes Dining Hall is still open, not everyone can afford it.

The free service offers food and personal hygiene items to the MSSU campus community. Visitors who show a student ID can walk away with a prepared bag of food and necessities while school is out of session. The Lion Co-op was launched in the fall of 2018 to help combat food insecurity among students.

Andrea Cullers, an associate professor of kinesiology and Lion Co-op co-director, said even though MSSU has moved to online courses, there are still students and staff who are either staying in the dorms or living in the area who may not have transportation or access to food.

“We felt it was important to keep providing our services and sometimes the most vulnerable are affected the most during these times,” she said. “In order to maintain social distancing, we’re only allowing a certain number of clients in the building at a time. If they are sick and they don’t want to come into the building, they can knock on the door and have a bag brought out to them.”

With the White House advising the public to avoid groups of more than 10, the Lion Co-op has set up a system to allow four visitors at a time. The clients will receive a prepared bag of food and hygiene items that should last them about a week. Each bag contains vegetables, protein, snack food and nonperishable items. Milk, bread, eggs and yogurt are also available upon request.

“We hope to be able to do this until the end of April,” Cullers said. “Like everyone, it’s a day-to-day situation, and if at some point we don’t feel like it’s safe to do, then we’ll modify it, but right now, we don’t have to. Personally, doing something like this helps me cope during a crisis.”

Gil Salgado, 21, a senior who interns at the co-op, said the operation still needs continued donations, especially toilet paper, can openers, canned goods and fruit cups. Salgado and other volunteers were at the co-op Wednesday assembling dozens of bags and handing them out to clients.

“A lot of students, they can go home, but for a lot of other students, this is their home,” Salgado said.

Kandace Logan, a volunteer and staff member with Project Stay, said she’s noticing vast differences between the Joplin tornado in 2011 and the coronavirus outbreak, in terms of how the public is reacting to crisis situations.

“Crazy things happened during the Joplin tornado and no one knew what to do, but the difference is that people are hoarding this time and during the tornado, everyone was giving,” Logan said. “The communities around us weren’t affected, so they were bringing supplies. Now, everyone is trying to help themselves, and I get it because I don’t want to run out of anything either. But this is helping level that out.”

After the first hour it was open Wednesday, the pantry was visited by one staff member, three students on campus, four students off-campus, one international student and four people with no transportation. Cullers said they’re anonymously keeping track to get a better idea of who is being served.

Brandon Ocheltree, a 21-year-old transfer student from Southern California, was one of the students who received assistance from the Lion Co-op this week. He lives on campus and said he’s been using ride-sharing services to get around because he doesn’t have transportation.

Ocheltree said he was grateful to take home a bag of food that he can prepare in his dorm, where he has only a fridge and a microwave.

“It’s really nice because I don’t have too much money,” he said. “I don’t have a car, so it’s a little tough. I came here last week, and I enjoy it. They have good food, and it’s stuff that I can eat. It’s rough not having the cafeteria being open.”

Haylee Pyburn, a 19-year-old sophomore, used the co-op services once a week for a year and now volunteers there. She has a limited budget, attends school full time and works part time, which she said gives her little time to go grocery shopping. Pyburn said the co-op has been a lifesaver and is a way to socialize in a friendly environment.

“It’s made a huge impact on my life,” Pyburn said. “I work at a mental health facility, and I really love my work. The co-op has helped me stay there and keep doing what I love. It’s relieved a lot of stress and helped me figure out what I wanted to do. I really like volunteering and being on the other side of it.”