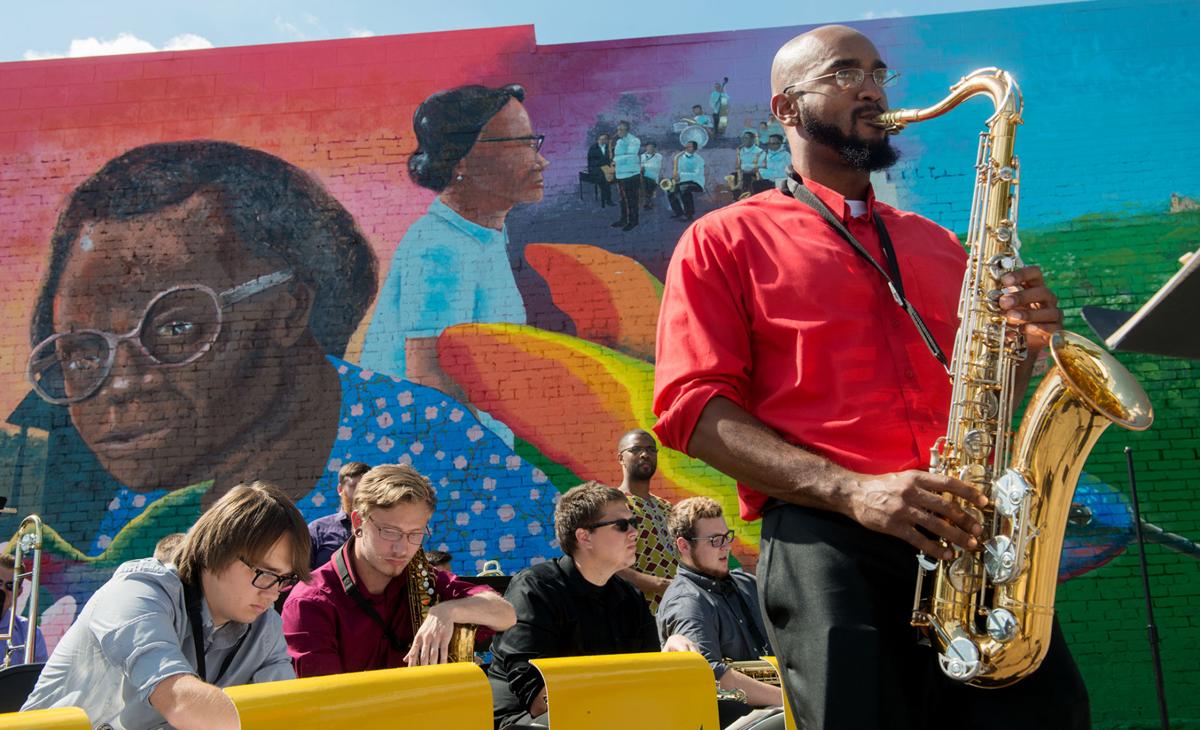 Mark Knowles, a Missouri Southern senior from the Bahamas, plays a solo while performing with the MSSU Jazz Orchestra before Sunday's dedication of the East Town mural.

Kyle McKenzie, lead artist on the East Town mural, talks about the design of the mural during Sunday's dedication. 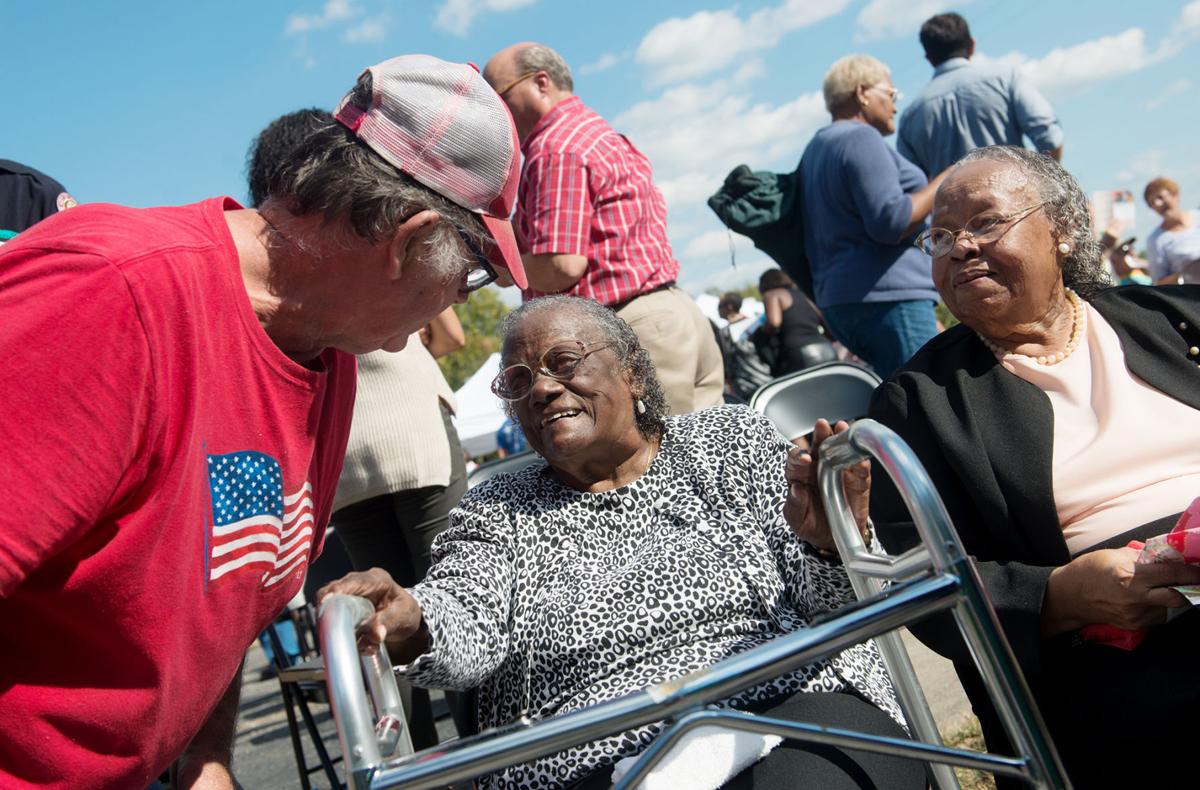 Buddy Mitchell talks with sisters Betty Smith and Susie Reavees, right, after Sunday's dedication of the East Town mural. Mitchell and Smith are both depicted on the mural.

Mark Knowles, a Missouri Southern senior from the Bahamas, plays a solo while performing with the MSSU Jazz Orchestra before Sunday's dedication of the East Town mural.

Kyle McKenzie, lead artist on the East Town mural, talks about the design of the mural during Sunday's dedication.

Buddy Mitchell talks with sisters Betty Smith and Susie Reavees, right, after Sunday's dedication of the East Town mural. Mitchell and Smith are both depicted on the mural.

A lot of hands went into helping create the 60-foot mural on a building at 621 Langston Hughes-Broadway, and several of them were out to celebrate at the mural's dedication Sunday afternoon.

Every brick of the wall on side of the historic Earl Smith's grocery store building was successfully covered in paint, depicting the varied history of East Town. About 200 people, several of whom were East Town residents, were present.

Betty Smith, a longtime East Town resident and neighborhood historian, was featured prominently not only in the mural, but during the celebration.

"This is Joplin, Missouri," Smith said to the crowd. "Not over there, not that way — it's right here. And that's what you are going to hear about today."

Smith, 87, reminded the crowd the mural, though beautiful, was nothing without the history that made their town.

Smith said the expression on her face in the mural was to communicate, "Why did you wait so long?". She said she never thought she would live to see a mural on "this side of town," saying it had been the "forgotten side."

"If we had been younger, we could have been here also putting paint on the wall," Smith said.

She said she was thankful she was alive to give the mural historical context. Plus, she said she hoped the mural would be an inspiration to keep on building up East Town into a beautiful place.

The mural is named "Belonging to all the hands who build," which is a line from one of East Town's most famous former residents, Langston Hughes. Part of the poem talks about actualizing a "community dream."

The mural features hummingbirds and magnolias to represent grace and endurance. Near the magnolia tree, a figure sits at a pathway leading into a birds-eye view of East Town.

Lead muralist Kyle McKenzie said the figure was combination of the late Clovis Steele, who wrote a book about growing up in East Town, and his nephew Buddy Mitchell, a current longtime resident.

Buddy Mitchell and some of his family — he's one of nine siblings — were present at the dedication. They told stories about where relatives lived throughout East Town and remembered the times they would frequent Earl Smith's store. Mitchell was at the first planning meeting for the mural and was one of its most vocal participants.

"It's beautiful, isn't it?" Mitchell said, looking at the mural.

The project was announced earlier this spring and is part of a larger effort by the city of Joplin to use Community Development Block Grant funding for the redevelopment of East Town over the next several years. More than 150 residents of East Town and 300 children from the Boys and Girls Club collaborated on the mural's design.

McKenzie, the lead artist, said the mural has brought an outpouring of memories, and even at the dedication people have come up to him and told him stories of growing up in the area.

The figures on the wall, such as Smith, aren't instantly recognizable to those who pass the mural and aren't familiar with East Town history. McKenzie said one bicyclist passing through stopped by during the painting of the mural, and McKenzie was able to explain to him who Smith was and some of East Town's history.

"What I really hope comes from a mural like this is ongoing conversations," McKenzie said to the crowd.

Panning left of the birds-eye view of East Town, the mural portrays Lincoln High School, a high school for black students before desegregation, with Marion Dial, its principal for many years.

"They even got the name over the entrance identical," Marvin McMillan, an East Town resident and Lincoln High alumnus, said.

In his speech, McKenzie thanked McMillan, often accompanied by his dog, Nellie, as one of the residents who would stop by every day and "re-energize" the painters. McMillan was at the first planning meeting where he noted that black and white residents of East Town had starkly different memories, an obstacle the community had to work through in its design stages.

McMillan said he was happy with the end result. He also said the mural is a way of addressing the past and "passing on the torch" to the next generation of East Town residents.

"This unity will bring people together," McMillan said, with Nellie by his side. "It will open the door for future dialogue."

The Missouri Southern State University jazz orchestra played tunes for the crowd at the beginning and end of the dedication. Not far above them, a different jazz orchestra is depicted in the mural.

McMillan said the Duke Ellington Jazz Orchestra, a famous national traveling band, was able to play in East Town with the help and coordination of Melissa Cuther, who is also pictured in the mural. Since hotels wouldn't put up black musicians, Cuther, a school teacher, was instrumental in getting housing for the orchestra.

At the far end of the mural, viewers can see into the painted homed of East Town residents of various ages and races. McKenzie said the mural isn't completely done and that area still needs touching up.

McKenzie said all of the ideas on the wall came through planning and design meetings. Thousands of ideas were voiced.

"For all those subjects who didn't get in there, there should just be some more murals," McKenzie said, to the delight of the crowd.

A stanza from the poem "Belonging to all hands who build":

"The hand seeks tools to cut the wood,

To till the soil, and harness the power of the waters.

Then the hand seeks other hands to help,

A community of hands to help-

Thus the dream becomes not one man’s dream alone,

But a community dream.

Not my dream alone, but our dream.

Not my world alone,

But your world and my world,

Belonging to all the hands who build."