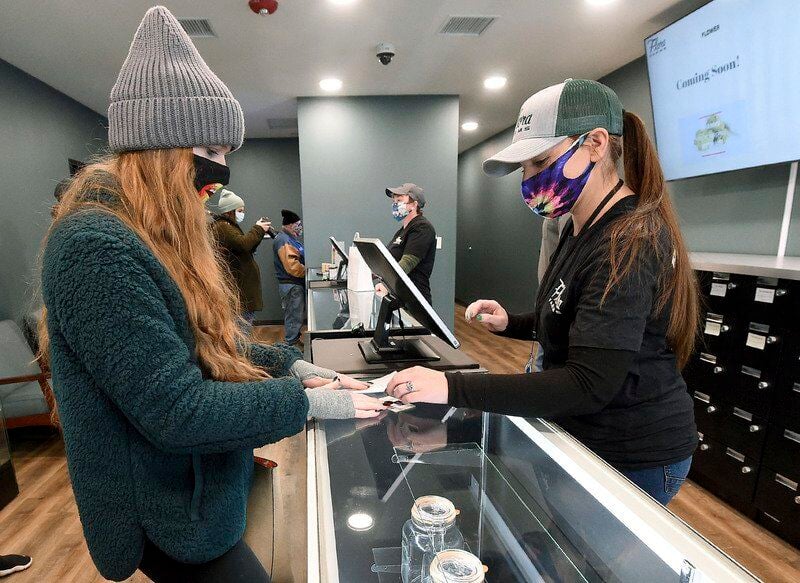 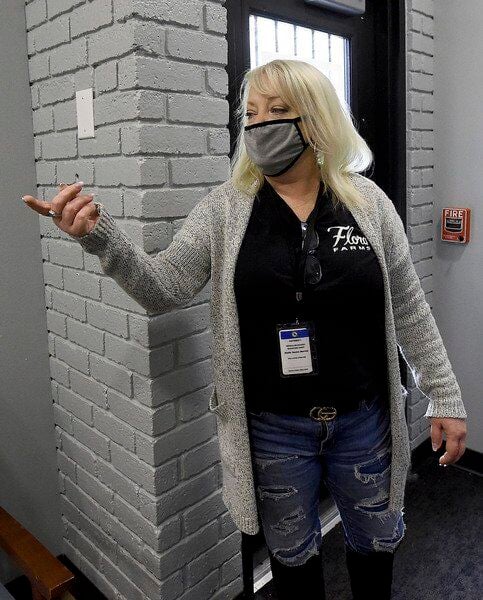 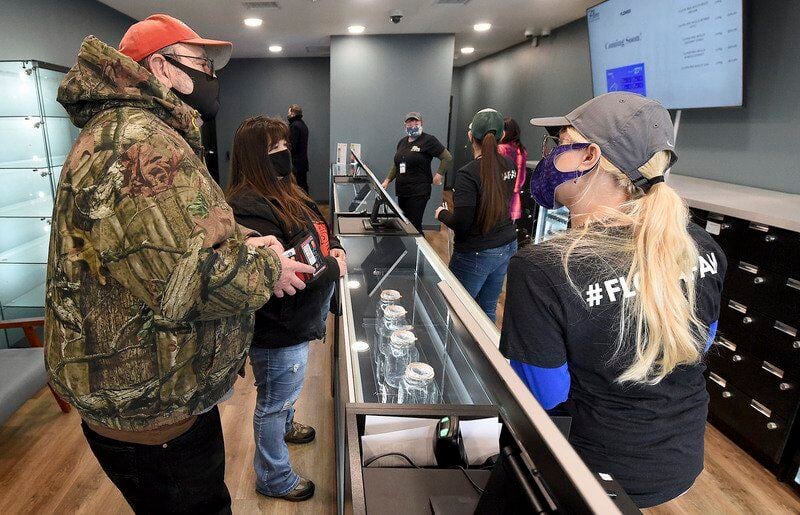 Mark and Shanna Mosley (left) check out the selection of product as budtender Stalena Elsten assists during the opening day of medical marijuana sales on Thursday at Flora Farms in Neosho. Globe | Laurie Sisk 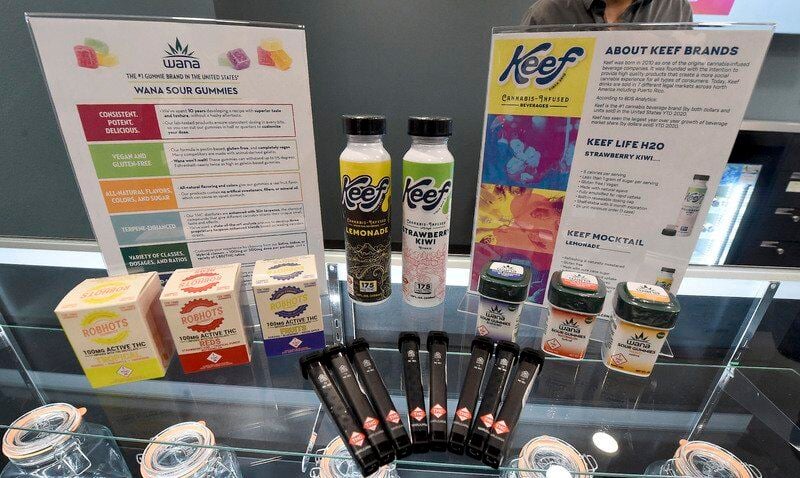 Pre-rolled joints, edible products and cannabis-infused drinks are displayed on a counter at Flora Farms in Neosho on Thursday. Globe | Laurie Sisk 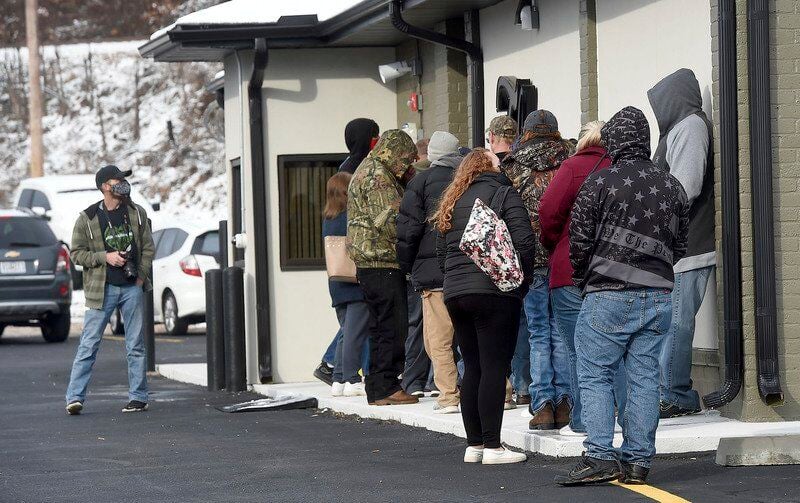 Customers wait Thursday morning outside Flora Farms in Neosho as the store prepares to open for its first day of sales of medical marijuana products. Globe | Laurie Sisk 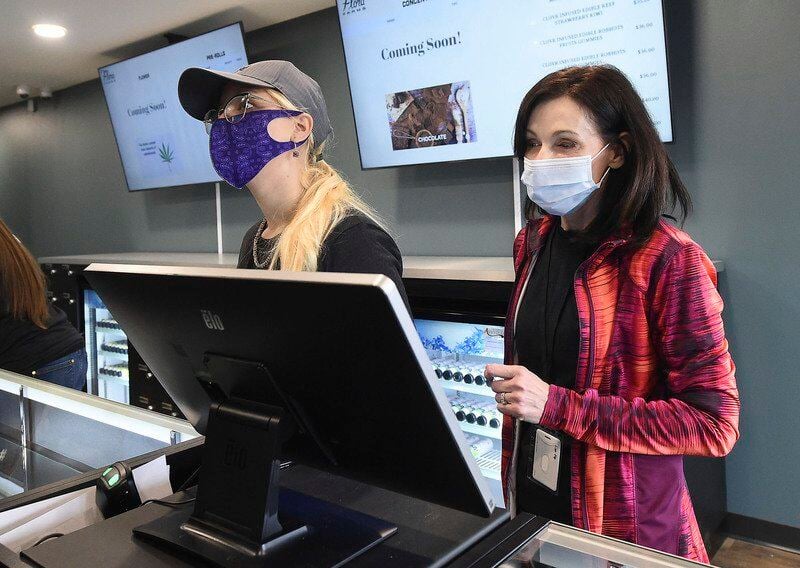 Customers wait Thursday morning outside Flora Farms in Neosho as the store prepares to open for its first day of sales of medical marijuana products. Globe | Laurie Sisk

Flora Farms, 890 W. Harmony St. in Neosho, had a line of patrons wrapped around the building when it opened Thursday. Supplies were limited on prerolled joints in four different strains from partner CLOVR Cannabis. The dispensary also offered cannabis beverages and gummies. Other infused products are expected to be available in the following weeks.

Dispensaries in Missouri are opening two years after voters approved a constitutional amendment in November 2018 allowing for a program that is being overseen by the state Department of Health and Senior Services. Cassville Dispensary in Barry County was one of the first medical marijuana dispensaries to open in Southwest Missouri this fall. Other dispensaries have said they will open soon in Joplin, including Missouri Made Marijuana at 1502 S. Range Line Road and Shango at 2401 E. 32nd St.

The largest medical marijuana cultivator in Missouri, Flora Farms will supply Missouri’s patients with cannabis to manage their medical issues and the symptoms that accompany them. Flora Farms also plans to open a dispensary in Springfield as well as another dispensary and a cultivation site in Humansville, according to officials.

Mark Hendren, president and co-owner of Flora Farms, said the operation is 80% Missouri owned. with remaining partners from Oklahoma and Kansas.

“We’ve been working on this for over 18 months,” he said. “There’s a lot of satisfaction because we’ve been waiting for this day for a long time. We wanted to make sure that we have something in Southwest Missouri, and Neosho is a great fit for us.”

Shanna and Mark Mosley, of Neosho, were among the first customers Thursday morning. The husband and wife both use medical cannabis to treat pain, anxiety and schizophrenia. They had already visited the Cassville Dispensary but are looking forward to something closer to home.

“We got our medical cards over a year ago, so we’ve been waiting a long time,” said Shanna. “Depending on what they have, we may stop at dispensaries in Joplin once they’re open. We would love to see recreational marijuana passed next.”

A few patrons at a time were admitted to a waiting area before they could view what was being offered in an adjoining locked room. The television monitors behind the bud tenders displayed the types of different strains, gummies and infused marijuana products. Hendren said employees are trained to talk about the products and how they can be used medicinally.

“Back in the day, they had ‘Reefer Madness’” he said, referring to a 1936 film. “So now there’s a negative stigma attached to it. As long as people are responsible with it, we can show that there’s no reason to fear it. Then they can see that this is a great thing.”

Flora Farms will soon carry a wide variety of items including flower, edible cookies and chocolates, as well as vape cartridges and concentrates. Matthan Black, marketing specialist at Flora Farms, said just like everything in the cannabis industry, it’s a step-by-step process.

“I’m working every day up at Humansville at the grow facility so I can see the plants growing, and we’ll get that harvested out as soon as possible,” said Black. “We’re excited as a company to put out our premium flower, not only at our dispensaries but dispensaries all across the state. Product has been so limited since the dispensaries started opening, and we think we’ll be able to help solve that problem.”

Lisa Fay, assistant manager at Flora Farms, who has been a nurse for nearly 20 years, said she began looking into medical marijuana after seeing pharmaceutical treatments fail her patients.

Valerie Mattingly of Neosho was another who endured the cold Thursday to shop at Flora Farms. She received her medical card in September 2019 to help treat her depression, anxiety and post-traumatic stress disorder.

“It helps with multiple things,” she said. “Cannabis is a great solution for me. I definitely went down the medical marijuana route because I didn’t want to get addicted to opioids, especially since I’ve seen that happen to family members. I’ve never had any negative side effects from it.”

The Missouri Department of Health and Senior Services has a website with more information on medical marijuana at medicalmarijuana.mo.gov.